Mystic Mellor’s prognostications don’t always stand the test of time. But what I wrote a decade ago about Yuja Wang’s first London recital does. I predicted that she was the young Chinese virtuoso to watch, not Lang Lang, who was then everywhere.

Because, for Lang Lang, the music was all about him, and he pulled it around to offer cheap thrills to the crowd – a bit like a circus act.

Yuja Wang is different. She’s a complete virtuoso, with physical capabilities that are astonishing, given her slender frame. Her hands, for instance, stretch twice as wide for their size as normal.

That’s how she can encompass technically a huge piece like Rachmaninov’s Third, arguably the most demanding of all romantic concertos. 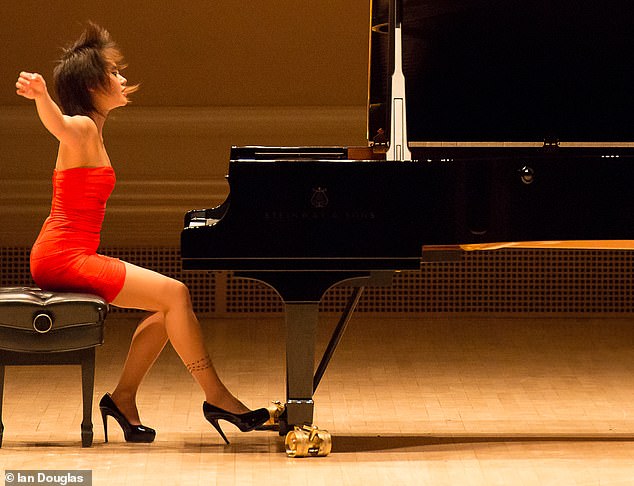 Yuja Wang’s performance at the Royal Albert Hall demonstrates her virtuosity with Rachmaninov’s Third, arguably the most demanding of all romantic concertos

With Lang Lang, virtuosity seems to be an end in itself. With Wang it’s just the beginning, and has always been so.

She went from Beijing via Canada in her mid-teens to study at Philadelphia’s renowned Curtis Institute. Her teacher, himself a successful pianist, Gary Graffman, got it immediately.

What distinguished her, he later observed, wasn’t her technique but ‘the intelligence and good taste of her interpretations’.

Just so, as was everywhere apparent in this Prom. It was exhilarating, not because, like so many technically capable but artistically vulgar pianists, it was the musical equivalent of cricket’s Big Bash.

Rachmaninov had possibly the largest hands in classical music. He could span 12 piano keys from the tip of his little finger to the tip of his thumb.

No, exhilarating here because everything was so well thought out, with playing that was often on a chamber-music scale, and perfect runs and complex passage work often executed no louder than mezzoforte.

This concerto, with its two huge cadenzas in the first and third movements, was used by Wang as a tribute to the complexity and sophistication of Rachmaninov’s thinking, not as a way of showing how good a pianist she is.

In that, she was greatly assisted by her conductor, Myung-whun Chung, and the excellent Dresden Staatskapelle.

Chung was a good enough pianist to take second prize in Moscow’s Tchaikovsky International Piano Competition. As a conductor, he too exercised restraint, with, for instance, the final big tune for the orchestra treated lyrically rather than as an overpowering, über-romantic statement.