St George Illawarra were their own worst enemy as they suffered a 31-12 defeat against North Queensland on Friday night, with Zac Lomax enduring a nightmare moment.

The Dragons trailed 20-6 at halftime and their night took a turn for the worse shortly after the break, when Lomax attempted an audacious no-look flick pass off the back of his hand despite being 15metres out of his own try line.

The attempt backfired disastrously, with the ball missing its intended target, Dragons winger Tautau Moga, and bouncing on the turf before being scooped up by Murray Taulagi.

The Cowboys young gun could barely believe his luck, as he picked up the Steeden before scoring one of the easiest tries of his career.

‘It’s a dangerous place to be looking for a flick pass,’ the Blues coach said in commentary on Nine.

‘He got on the outside of his centre and looked for the miracle ball.’ 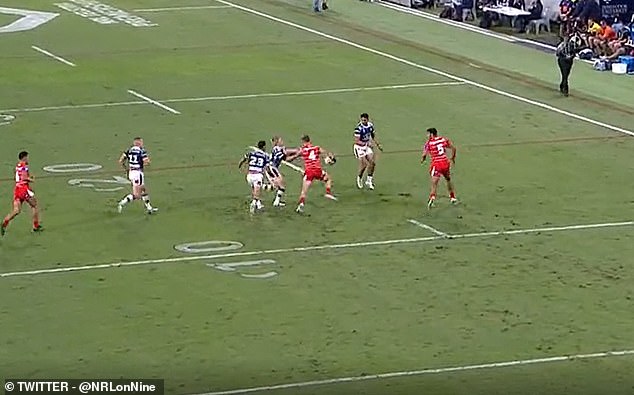 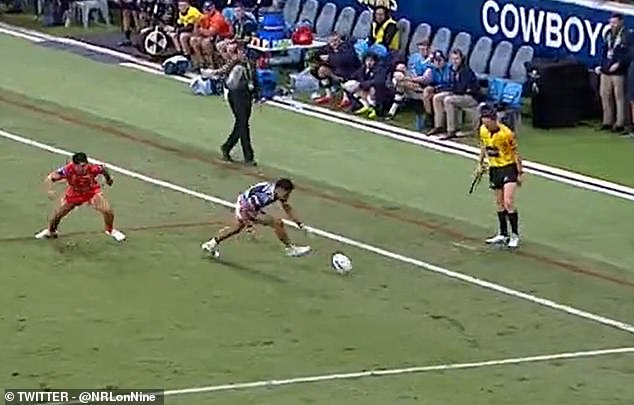 Taulagi’s try all but sealed the game for North Queensland as they clinched their 10th win of the season and cement themselves in the competition’s top four.

The hosts produced some absolutely dazzling football at times and tore through the Dragons’ defence at will, with Scott Drinkwater, Peta Hiku and Reece Robson all crossing in the first 30 minutes, before Moses Suli eventually put St George on the board just before halftime.

The Cowboys have a knack of turning up their defensive intensity in second halves and held their opposition to just the one try in the second stanza.

Their 46 points conceded in second halves through 14 rounds this season is the NRL’s best. 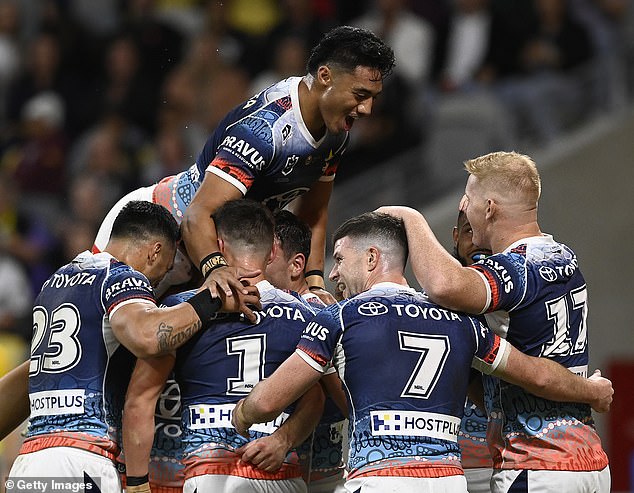 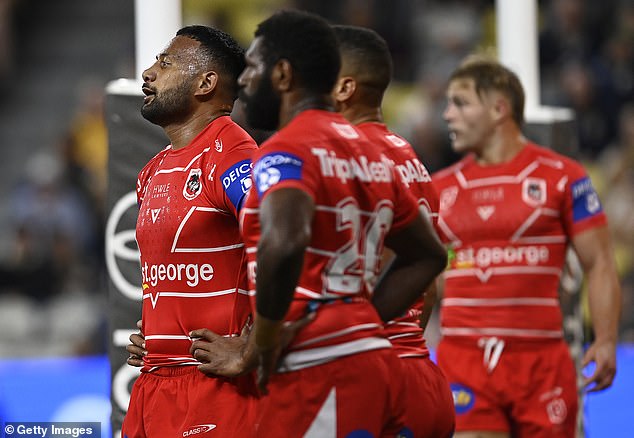 The home side was well in control after they’d added three tries to one in the first stanza.

It was the visitors who enjoyed the lions share of territory in the second half, only capitalising on it late through a try to Jaydn Su’a in the 74th minute.

Their play-the-balls deep in the final third were shutdown with punishing defence by the Cowboys.

North Queensland hooker Robson paved the way with 43 tackles, none better than on former teammate Francis Molo on his tryline to force an error late. 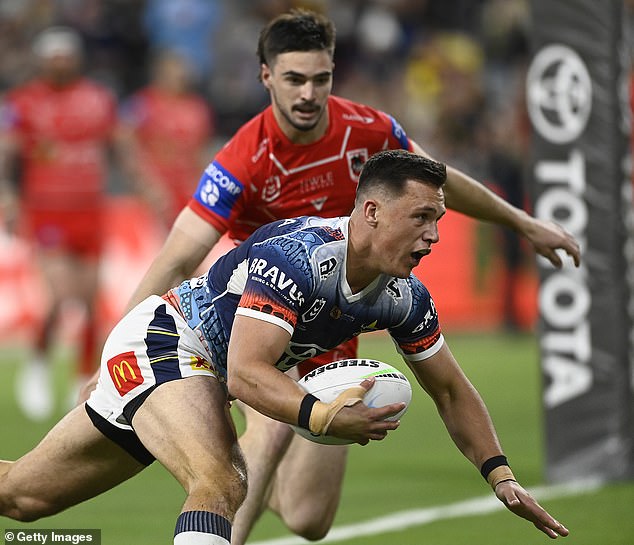 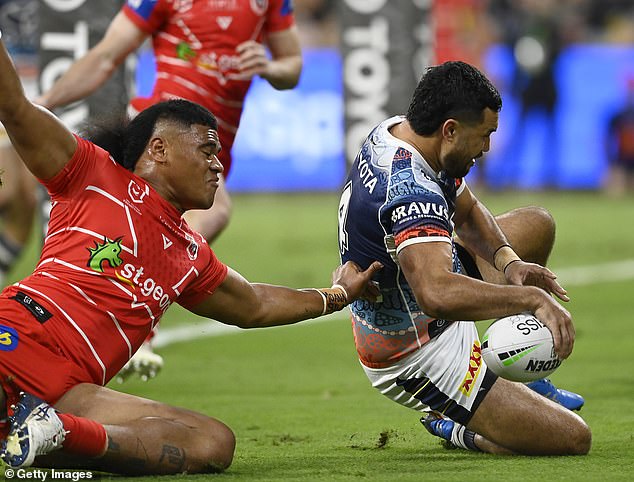 Cowboys coach Todd Payten said he was looking for ball control from his side but they coughed it up on their opening two sets before the Dragons gifted them field position with back-to-back restarts.

Tom Dearden capitalised on the deep territory, putting Coen Hess through a hole before he offloaded to a surging Drinkwater to plunge over.

The Cowboys were then back on the offensive as Dearden forced a goal-line dropout, with Drinkwater turning provider on the resulting set, grubbering to the in-goal for Hiku to bag their second. 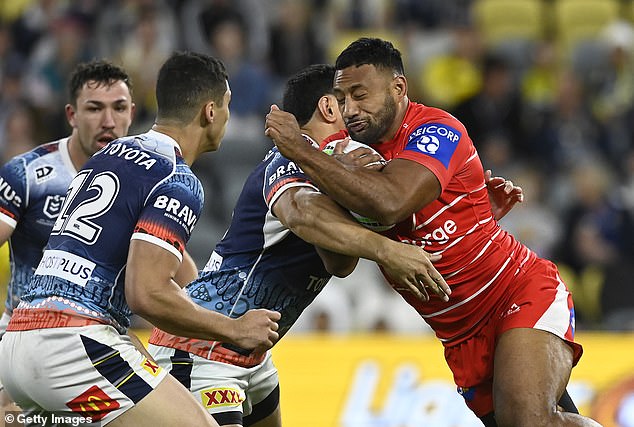 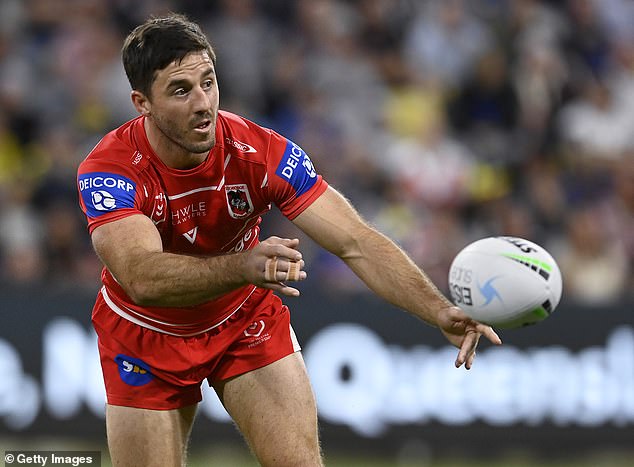 A penalty goal by Valentine Holmes made it 14-0 after 22 minutes before the Dragons had their first real crack at the line but Cody Ramsey’s try was overturned due to obstruction.

Moments later the home side had their third after a deft pass by Taumalolo in midfield put Griffin Neame through a hole, he in turn finding a supporting Robson to score against his former club.

Suli’s try before halftime gave the Dragons some hope but the Cowboys kept them at arm’s length to secure the win.

In a blemish for the Cowboys, they lost young-gun backrower Heilum Luki to a suspected ACL injury in the first half.