Pictured: Girl, eight, who was ‘tortured to death for accidentally releasing pet parrots’ in Pakistan as couple who employed her as a maid face lie-detector test

The first picture has emerged of an eight-year-old girl who was beaten to death in Pakistan after allegedly releasing the pet birds of a couple she was working for.

Zahra Shah died in hospital in Rawalpindi on June 1 after being brought in by Hassan Siddiqui, who claimed she was a domestic servant.

Siddiqui and his partner are now under arrest and will be held in jail for two weeks while police give them a lie-detector test.

Zahra Shah, eight (pictured), died in hospital in Pakistan on June 1 after being brought in by Hassan Siddiqui, who medics say confessed to beating her

Medics at the hospital where Zahra died say Siddiqui told them that he and his wife had beaten the girl when he first brought her to them.

Asked why he had attacked her, he said she had released his ‘expensive pet parrots escape from their cage’, medics claimed.

The girl was bleeding heavily, had torture marks on her face chest, arms and legs, and was hooked up to a ventilator in the intensive care unit.

Medics said they called police after Siddiqui disappeared while she was being given treatment.

Officers tracked him down via the identity card he had used to check her into the hospital.

Employing domestic servants under the age of 15 is illegal in Pakistan, though the practice is widespread.

Syed Fazal Hussain Shah, Zahra’s grandfather, told the BBC that her parents had sent her to work with Siddiqui because he promised to educate her.

‘That was something that we couldn’t afford. So we decided to send her,’ he said. 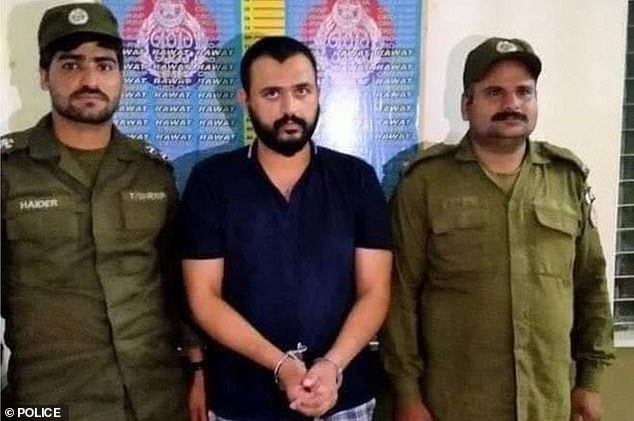 Siddiqui (pictured) and his wife were arrested a short time later, and are now in jail awaiting a lie-detector test

Zahra came from the city of Kot Addu, some 250 miles from where she died.

The case has brought the rights of children back into focus in Pakistan, with #JusticeForZahraShah trending on Twitter and celebrities chiming in.

Actress Mahira Khan wrote: ‘The demons walk freely among us.’

Rapper-comedian Ali Gul Pir decried the latest example of alleged child abuse, saying: ‘If a child who was killed because she wanted a bird to be free can’t get justice. Then nothing that you have achieved matters.’

It comes after the parliament in Islamabad passed new legislation this year to specifically address sexual crimes against children.

The Zainab Alert Bill passed in January and is named after six-year-old Zainab Ansari who was raped and murdered in Kasur in 2018.

Zainab’s case brought nationwide protests after she was found dumped in the trash.

Her death was the 12th such brutal incident in the city of Kasur in as many months.