Deo the barman greets me with a big beer and an even bigger smile. ‘Jambo!’ he says, handing me an icy glass of Kilimanjaro beer.

In front of me, jade-coloured water slides onto the sand and I can feel a lunchtime snooze at Zuri Zanzibar beckoning. The resort, on the north-west shore of this bewitching island, opened recently.

East Africa in general, and Tanzania specifically, has some of the most dazzling stretches of coast in the world. What keeps the number of visitors down is the effort it takes to get here. You fly into the city of Dar es Salaam and transfer to a tiny plane which will deposit you on Zanzibar, in the archipelago known as the Spice Islands.

Silken sand: East Africa in general, and Tanzania specifically, ‘has some of the most dazzling stretches of coast in the world’. It is also relatively quiet as visitors must first fly to Dar es Salaam and then take a tiny plane which will deposit them on Zanzibar

But it isn’t just one beach after the next. Far from it. There’s a truly fascinating culture. I start with two nights in Zanzibar City, where many of the archipelago’s 1.3 million residents live.

Buried inside is the historic quarter of Stone Town, where a jumble of influences from Africa, Arabia, India and Europe create one of the most absorbing towns on the continent.

A labyrinth of clove-scented alleyways and huge wooden doors carved with lotuses lead to a towering Anglican cathedral — a late-Victorian gothic building and the first of its kind in East Africa.

It’s constructed on the site of the former slave market, and the memorial — a sculpture of five men with chains around their necks — is a sobering reminder of the island’s past.

Today there is an irresistible buzz and energy in Stone Town. Shopkeepers will ask you to their stalls with a smile and handshake — but if you don’t want to buy anything, that’s no problem. 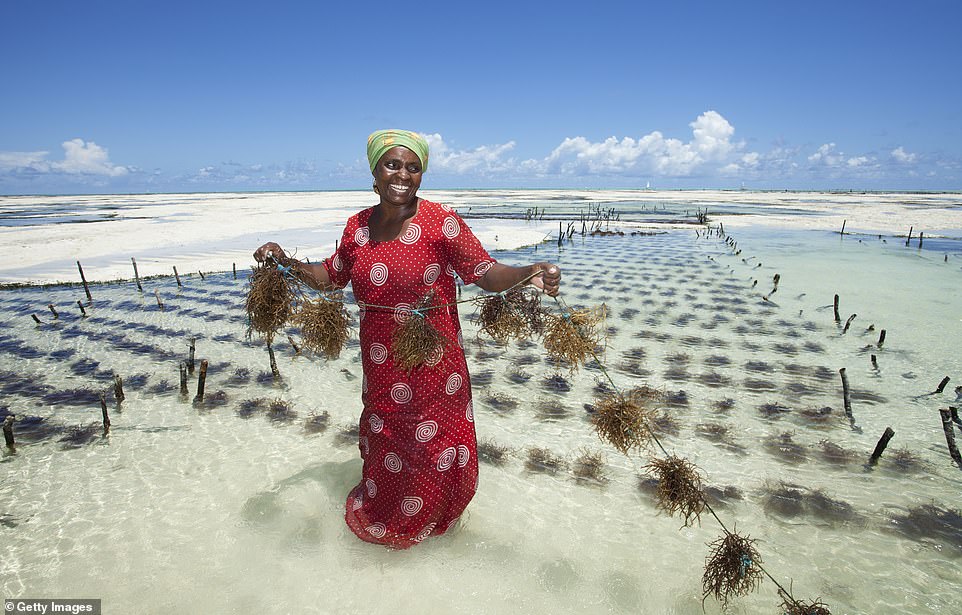 She sells seaweed by the seashore: A female seaweed farmer shows her haul off the coast of Zanzibar. Organic toiletries from the Seaweed Co are a specialty in this part of the world where female-led social enterprises are a popular initiative

You will want to take pictures, though. This is where Queen singer Freddie Mercury was born, and fans still pose outside his home — or Mercury House — for a selfie.

At Jaws Corner, where a giant shark mural is painted on a crumbling wall, I watch elderly gentlemen play backgammon, while young boys rush out of video game shops on their way to the mosque. Around 99 per cent of the island is Muslim, and the call to prayer is the town’s hypnotic soundtrack.

Nearby at Forodhani Gardens, a small waterfront park, families eat dinner at the open-air food market. Ginger cats twirl around lamp posts, waiting for toddlers to drop pieces of sweet pancake from Mr Big Banana’s stall, or dollops of urojo — a thick mango and tamarind soup.

‘Welcome!’ Emmanuel says to me as he tends to fish kebabs on his barbecue stall. ‘Jambo!’ is my reply. If you learn just one Swahili word, make sure it’s this greeting. I take a seat on the sand, where teenagers in Manchester United shirts and burkas are exercising in a blur of knee-ups and bendy yoga poses.

If you get a chance, go to the east coast, where you’ll find the famous Rock Restaurant. 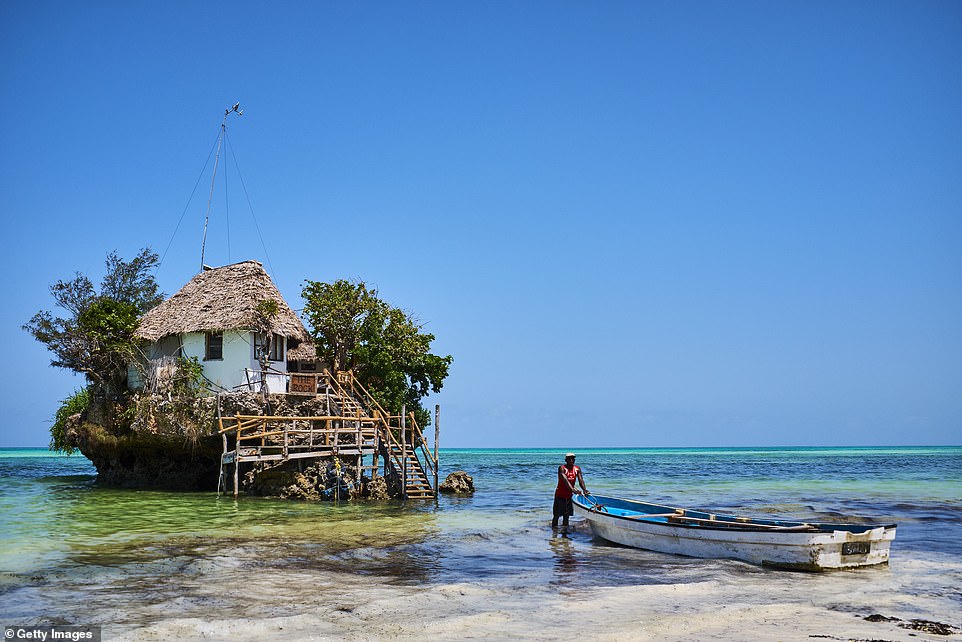 Rocking up: The famous Rock Restaurant on Pingwe Beach on the east coast of Zanzibar comes highly recommended

Zuri Zanzibar is a 13-acre oasis where a lamplit walkway lined with flowers and plants leads down to a spectacular beach — one of the only ones unaffected by the island’s tides.

The hospitality is bubbly and enthusiastic and I’m pleased that the hotel — with its outdoor rain showers, colourful bar areas designed by Czech artist David Cerny and its very own spice garden for tea — does plenty for the local community, which is demonstrably poor.

The hotel’s beaded curtains are handmade by a local women-led social enterprise and the organic toiletries from Seaweed Co are concocted by female seaweed farmers nearby. wh 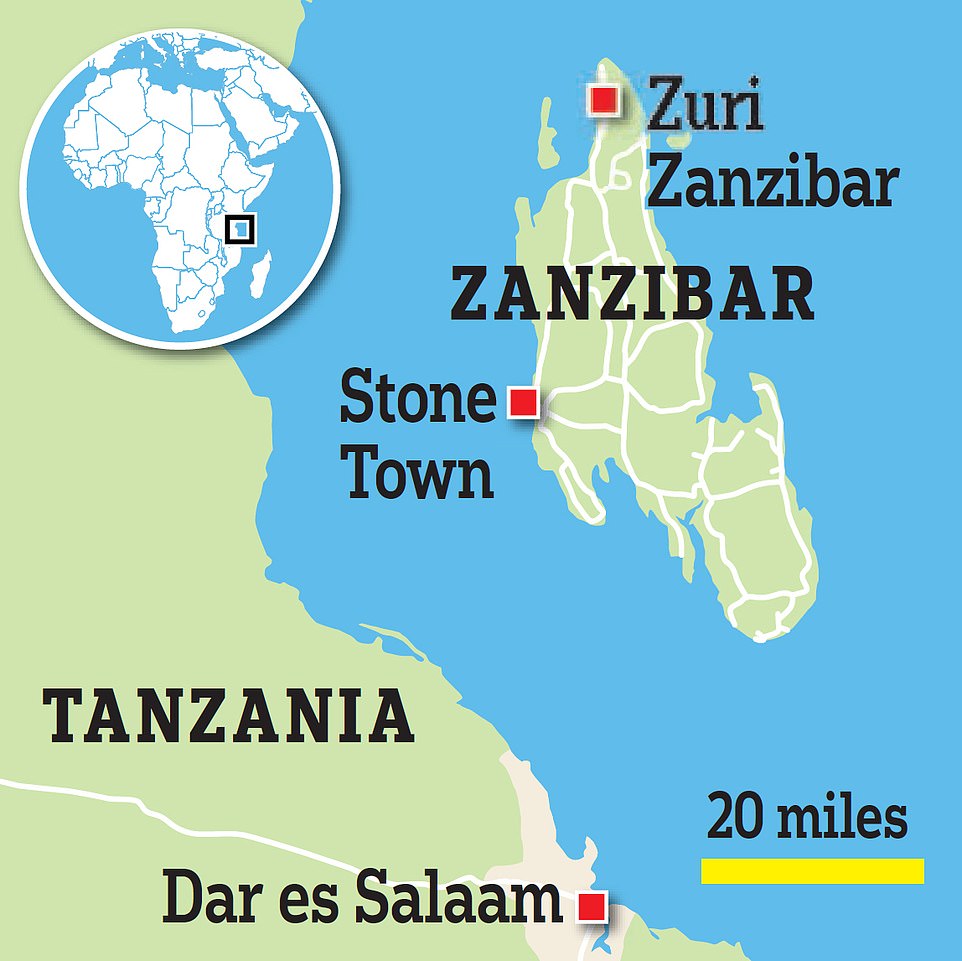 Zanzibar, about 20 miles off the coast of Tanzania, sits among an archipelago known as the Spice Islands. Visitors must fly to Dar es Salaam first before transferring to the islands

The beach is lively: local families come together to play football, while others sit and watch the sunset. The horizon is pricked with dhows, their cream-coloured sails billowing.

I entertain myself with a stand-up paddle board on the perfectly flat water, but soon topple in with a splash. Children laugh and clap, with Deo joining in. When I repeat the process, they laugh and clap some more.

And that’s what sets Zanzibar apart — not the pristine beaches, palm trees and turquoise ocean, but the smiles and laughter at every turn.

Africa Odyssey offers two nights at the Stone Town Park Hyatt followed by five nights at Zuri Zanzibar from £1,782 per person, including international flights and all internal transfers, on a half-board basis. To book, visit africaodyssey.com, or call 020 8704 1216.