Zara Tindall beams as her son Lucas, one, pets a horse at eventing festival at Gatcombe Park

Zara Tindall was snapped smiling broadly as her one-year-old son Lucas petted a horse as the family enjoyed a day out the at the Festival of British Eventing at Gatcombe Park today.

The Queen’s granddaughter, 41, a keen equestrian rider, was seen holding up baby Lucas, who grabbed the horse’s reins in his hands and attempted to pat the horse’s nose.

The sweet moment took place during the third day of the prestigious event, which is held at the Princess Royal’s estate in Gloucestershire.

As well as appearing to share a love of horses, the mother-of-three, who has been competing at the event, and her youngest son also shared an outfit, both donning navy tops and denim cut-off shorts.

Taking the reins: the Queen’s great grandson was seen holding the reins of a horse and patting its nose while mum Zara watched on 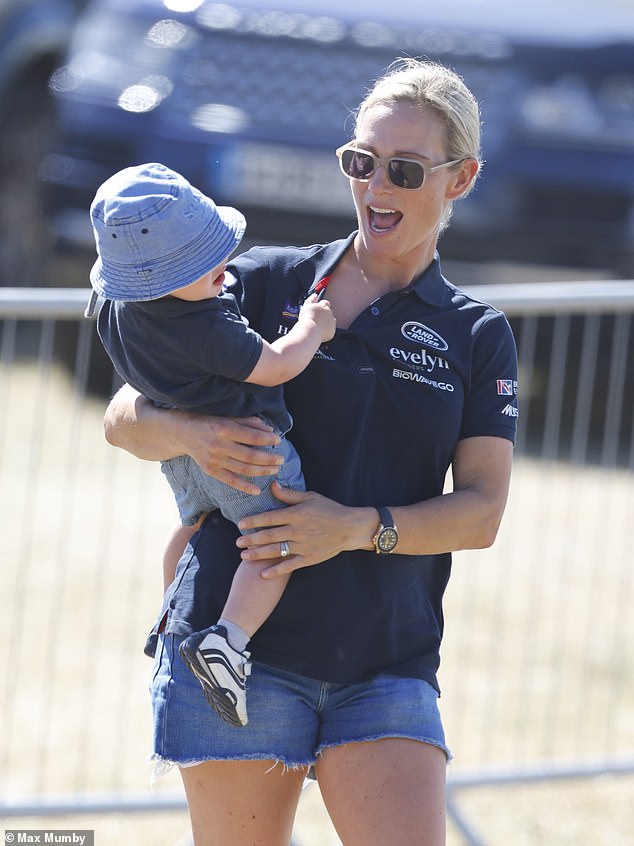 Zara, the Queen’s granddaughter, was then spotted enjoying some downtime and bonding with her youngest child 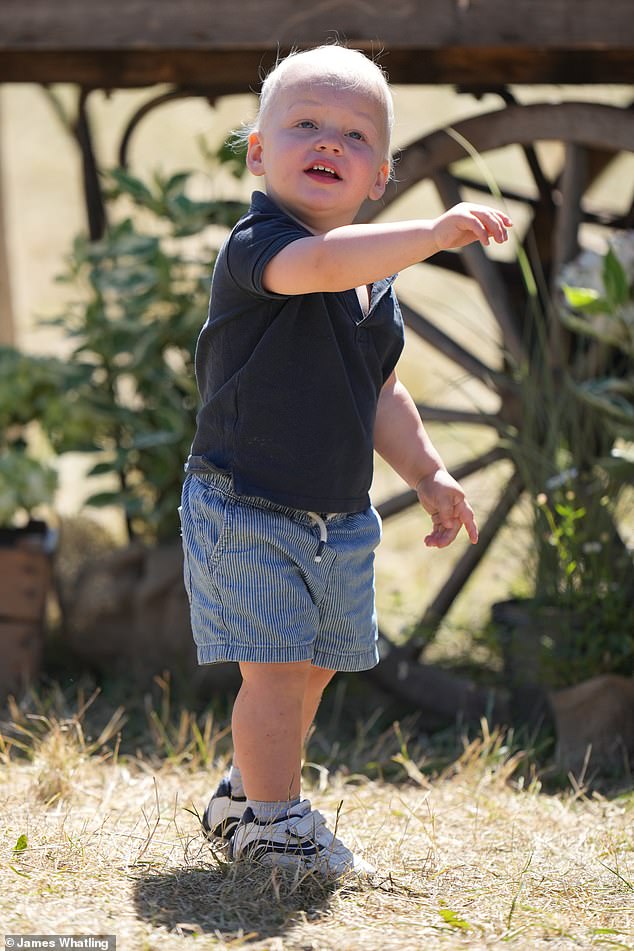 Lucas, who was born in March 2020, was enjoying the sunshine at the prestigious event held on his grandmother Princess Anne’s estate 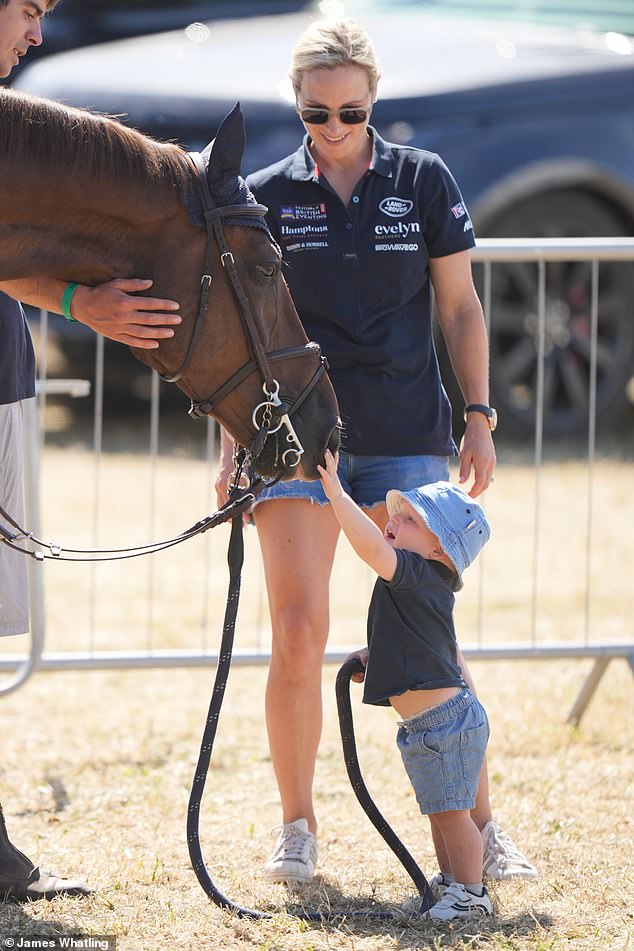 A born natural: a love of horses is strong in the family, with Princess Anne having competed in equestrian events in the 1976 Montreal Olympics 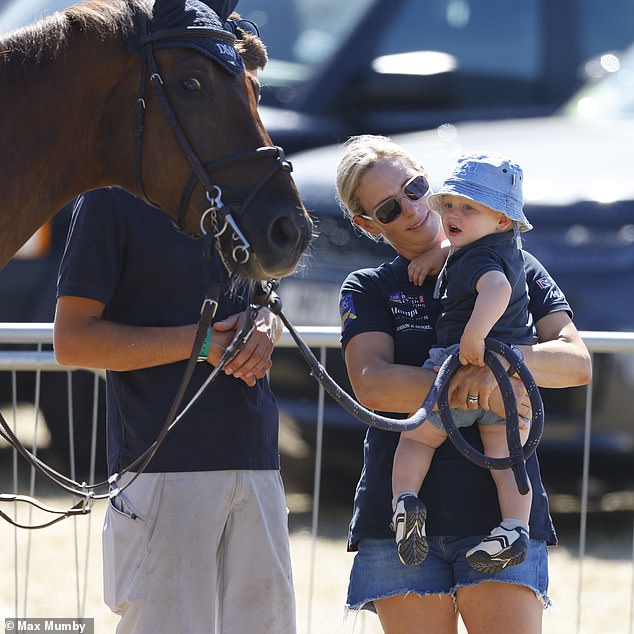 Like mother, like son: the pair were in matching outfits on denim shorts and navy blue polo shirts 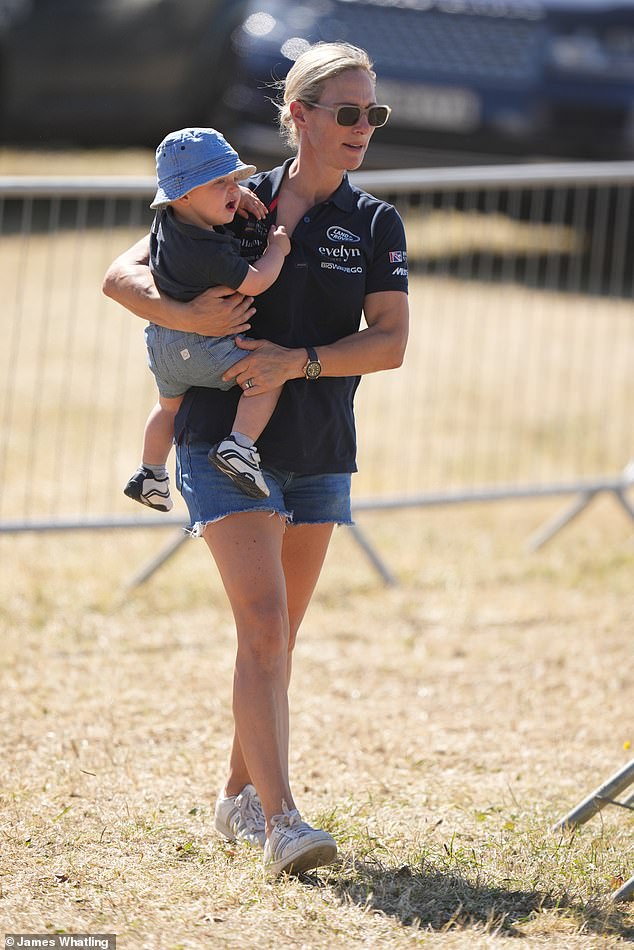 Horse play is over: Zara eventually carries the entranced tot away in her arms 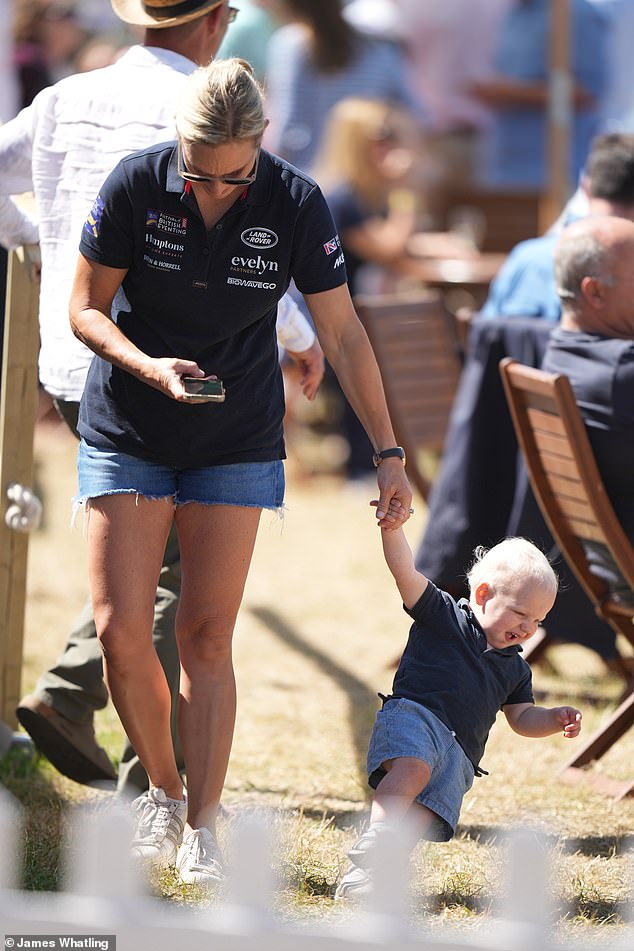 The annual event, which has been attended by members of the Tindall family over the last few days, hosts a range of activities including dressage, show jumping and different cross-country phases.

Now in its 28th year, it takes place on a course designed by Princess Anne herself – also a keen rider and horse lover.

It wasn’t just Zara and Lucas enjoying the show today: Zara’s eldest daughter Mia, eight, who is now 22nd in the line of succession for the British throne, was also spotted at the event.

Again wearing a matching outfit, the youngster was seen enjoying a bag of large candy floss. 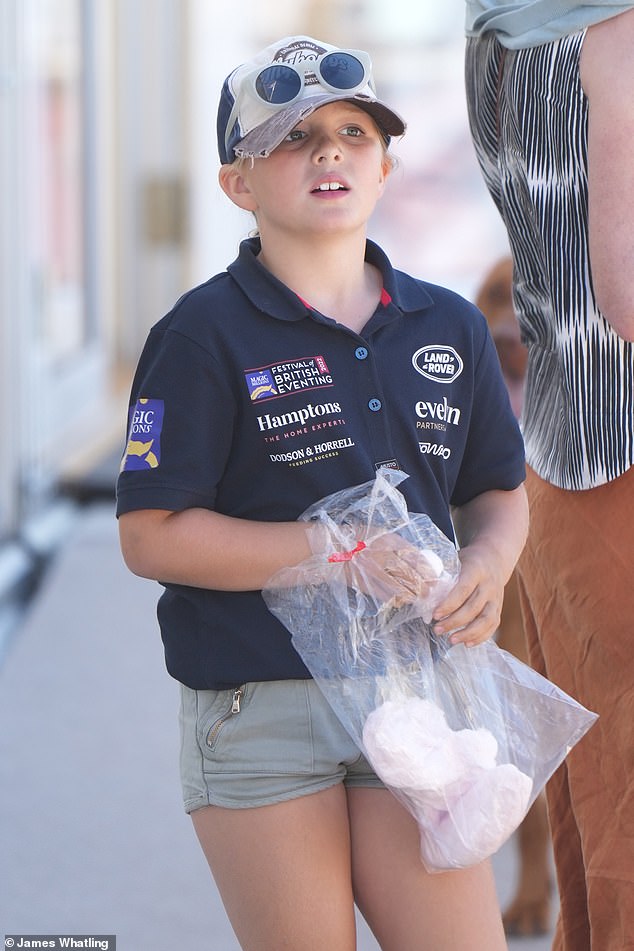 Age eight, Mia was spotted enjoying a large bag of candyfloss away from her younger brother 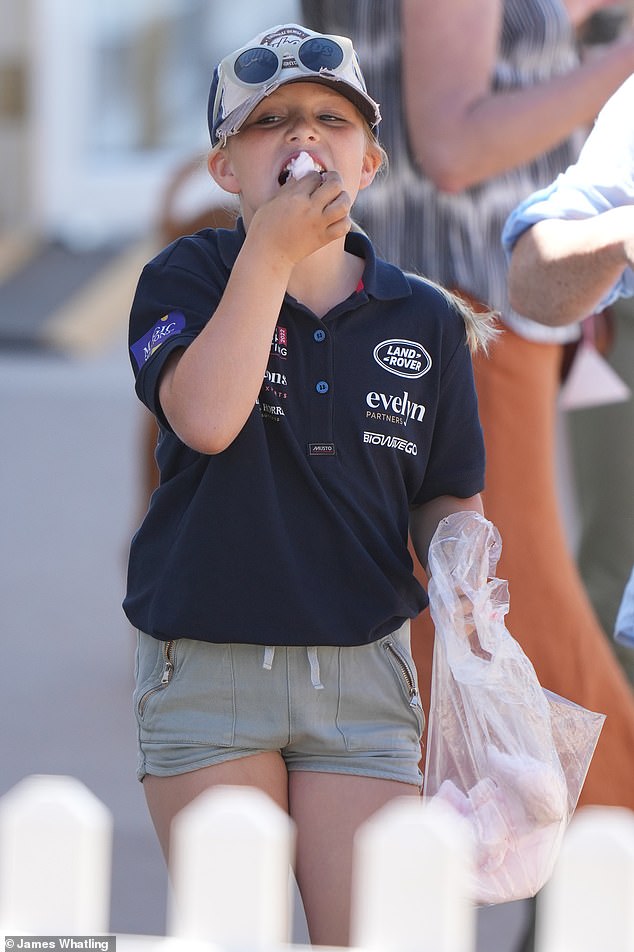 In the moment: While some were there for the equestrian events, Mia had her mind on other things 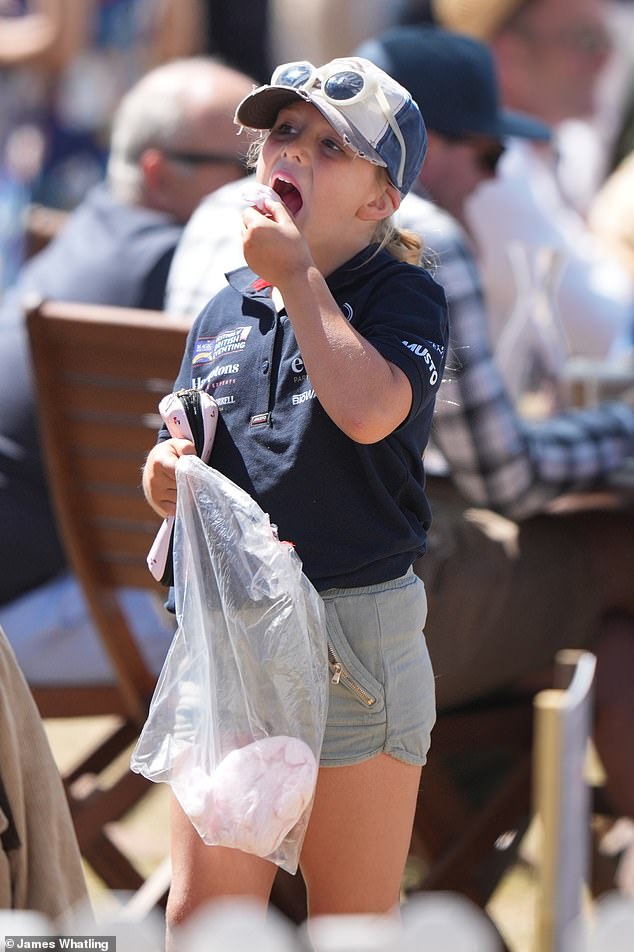 Clutching a pink pencil case, the Tindall’s eldest child was intent on devouring the whole bag

The former England rugby player, 43, attended the event alongside his two daughters Mia, and Lena, four, plus son Lucas. They were also joined by a casually dressed Princess Anne, 71.

And on day one of the event, it was Mia who was the centre of attention, with the youngster being snapped having fun as she enjoyed an ice-cream and visited the funfair. 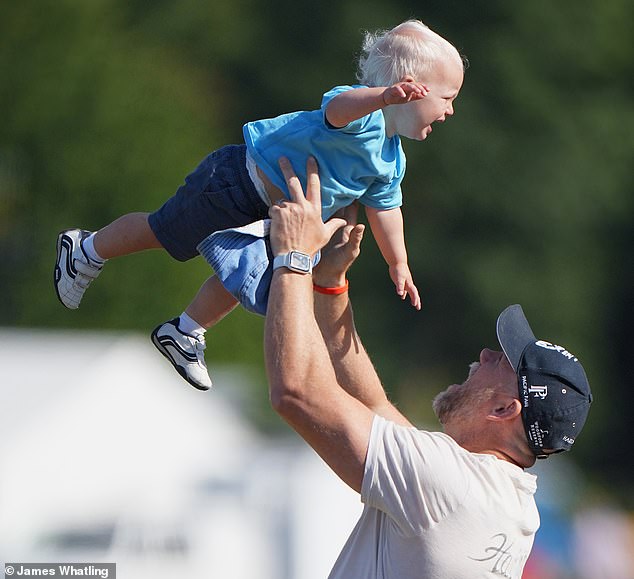 Daddy’s little boy! Mike Tindall appeared in excellent spirits as he joined his one-year-old son Lucas (pictured together) and his mother-in-law Princess Anne at the Festival of British Eventing at Gatcombe Park 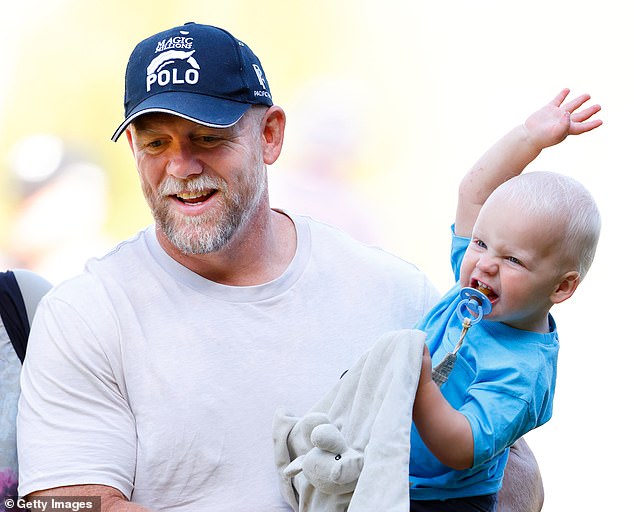 On day two of the event, Mike Tindall was on duty looking after his three children (pictured above with Lucas, one) 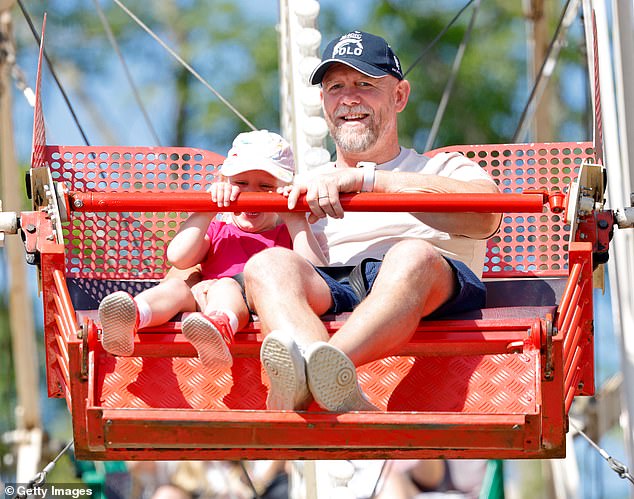 Don’t forget the middle child: Lena, four, was also getting in on the action 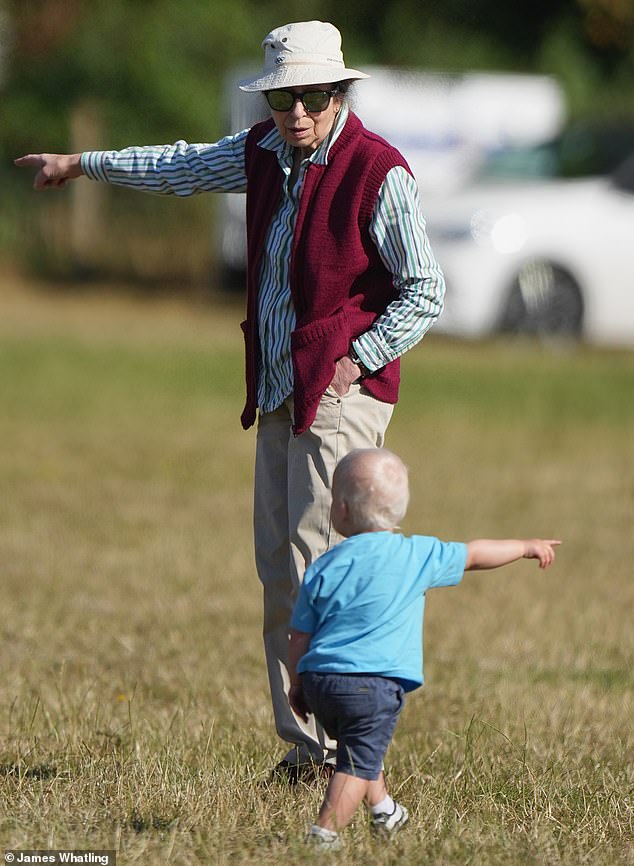 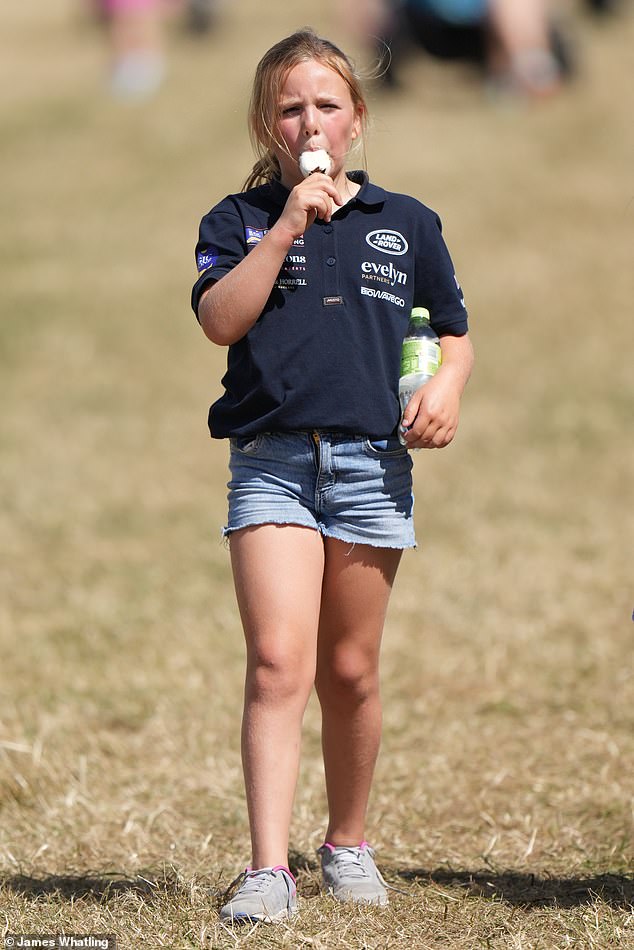 Most recently, the little girl was spotted  during a charity football match.