Ukrainian President Volodymyr Zelensky urged US President Joe Biden on Sunday to ‘help the whole world by designating Russia as a state sponsor of terror – a move that the White House has previously declined to make.

It comes amid international condemnation of Moscow’s ‘sham’ referendums in parts of eastern Ukraine that are being occupied by Russia. Videos have appeared to show residents being forced to the polls at gunpoint to vote on whether to allow Russia to annex their home territories.

Zelensky told CBS News’ Face The Nation that Moscow following through with the illegal annexation would make it ‘impossible’ to continue to try ending the invasion via diplomatic talks with Kyiv.

‘I think it’s a very dangerous signal from President Putin that tells us that Putin is not going to finish this war,’ Zelensky said.

He also urged the United States to go a step further than implementing yet more sanctions on Russia by showing its ‘leadership position’ in designating the country as a state sponsor of terrorism.

‘I understand there will be implications. These implications will make diplomatic negotiations impossible, however, they are terrorists, and we cannot let them do it out of fear. They will not surrender. We need to keep applying pressure,’ Zelensky said.

He added, ‘The United States can help the whole world.’

Zelensky cited the recent atrocities uncovered in Kharkiv, a region recently liberated from Russia’s control by the Ukrainian military.

‘We started exhumations, we lifted 500 bodies. The whole families were tortured and killed. Their families were buried together. Adults, men and women, and little children with bullets in their heads. Some of their body parts were missing,’ he said.

Adding of Russia, ‘They are terrorists, we need to recognize them.’

But the White House said earlier this month that such a move could upset the fragile humanitarian agreements set up with Russia in areas of Ukraine under its control.

Press Secretary Karine Jean-Pierre warned it could undercut international cooperation for holding Putin accountable and ‘could also undermine our ability to support Ukraine at the negotiation table.’

The Biden administration did offer a stark warning for Putin on Sunday, however, when the president’s national security advisor told Face The Nation interview that the US would ‘respond decisively’ if Putin makes good on his nuclear threat.

He was asked on NBC’s Meet the Press on Sunday whether the Moscow-US hotline popularly known as the ‘red phone’ was back up and running over Putin’s warnings. 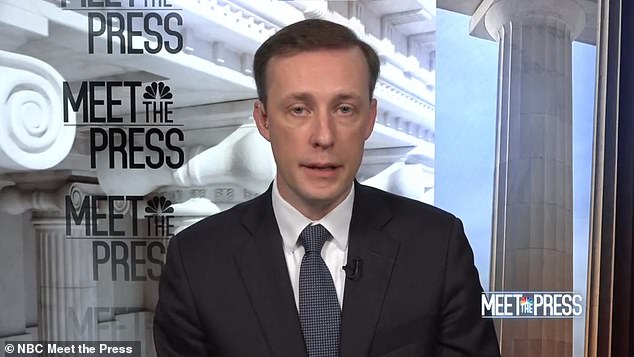 WATCH: National Security Adviser @JakeSullivan46 says the “red phone” is working again and the White House can speak with the Kremlin at “senior levels.”

“That has happened frequently over the course of the past few months. It has happened even in the last few days.” pic.twitter.com/ruZZB1oNOb

The Cold War-era communication line was first used by the US to inform Russia of JFK’s assassination. Its last known use was in 2016 when Barack Obama warned Moscow against interfering in the US presidential election.

‘The answer to your question is yes, we do have the capacity to speak directly at senior levels and to be clear about our messages to them, and to receive their messages,’ Sullivan told NBC. 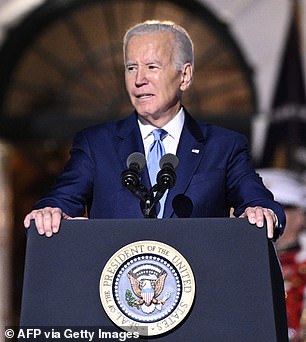 Sullivan elaborated more on those warnings during his CBS interview.

‘We have communicated directly, privately, at very high levels, to the Kremlin that any use of nuclear weapons will be met with catastrophic consequences for Russia, that the United States and our allies will respond decisively,’ he said.

The official added, ‘And we have been clear and specific about what that will entail.’

In a speech last week, Putin called up more Russians to mobilize in his flailing invasion, now in its seventh month, while also making a comment that was widely regarded as a nuclear threat.

He pledged to ‘certainly use all the means at our disposal to protect Russia and our people,’ adding: ‘It is not a bluff.’

Zelensky warned Sunday that he believed Putin was being completely serious.

‘I don’t think he’s bluffing. I think the world is deterring it and containing this threat,’ Zelensky said. ‘We need to keep putting pressure on him and not allow him to continue.’