Zero-emissions aeroplanes could take to the skies ‘within years’ thanks to British scientists who are developing technology that will allow them to run on ammonia.

The collaboration between Oxford-based Reaction Engines and the UK Science and Technology Facilities Council could see ammonia replace kerosene as jet fuel.

Unlike kerosene-based jet fuel, ammonia is less of a fire hazard and burns without releasing the greenhouse gas carbon dioxide that contributes to climate change.

Zero-emissions aeroplanes could take to the skies ‘within years’ thanks to British scientists who are developing technology that could allow a jet engine, pictured, to run on ammonia

Just like conventional jet fuel, ammonia could be stored in the wings of planes — but, unlike its kerosene-based counterpart, ammonia does not burn so easily on its own, making it far less of a fire hazard.

In order to be burned in a combustion chamber, ammonia needs to be mixed with hydrogen — which can be released from ammonia itself using heat and a catalyst.

The researchers are proposing, therefore, to use a heat exchanger to warm up the fuel en route to the engine, followed by a so-called ‘cracking reactor’ to split some of the ammonia into hydrogen and nitrogen.

The fuel mix can then be ignited to drive the engine, with the only waste products being nitrogen, water vapour and perhaps some nitrogen oxides — although the latter can be removed from the exhaust using more ammonia.

‘The fuel could actually scrub its own emissions,’ Reaction Engines’ James Barth told the MailOnline.

Given that the switch to ammonia would, at its minimum, only require minor additions to conventional jet engines, airlines could make use of the cleaner fuel without needing to completely replace their current plane fleets.

Ammonia does have a lower energy density than conventional jet fuel — meaning that aircraft powered by the novel fuel would have a slightly shorter range.

However, Dr Barth explained, ammonia fares well in comparison with other green aircraft solutions — including the more expensive fuel hydrogen and battery-power — and ammonia-powered planes would be perfectly suitable for short haul flights.

The switch may require an operational change, he added, but the team do not expect that the reduced range would prove to be a ‘showstopper’.

At present, ammonia is produced from natural gases like methane and atmospheric nitrogen — however, there is significant potential for the process to be made entirely renewable in the future by replacing the natural gas with electrolysed water.

At present, kerosene and ammonia are about the same price-per-tonne. While truly green production of ammonia will be more expensive, Dr Barth said that he expects to be offset by things like future carbon taxes.

‘We believe […] ammonia will be cost-competitive with synthetic fuels,’ he added. 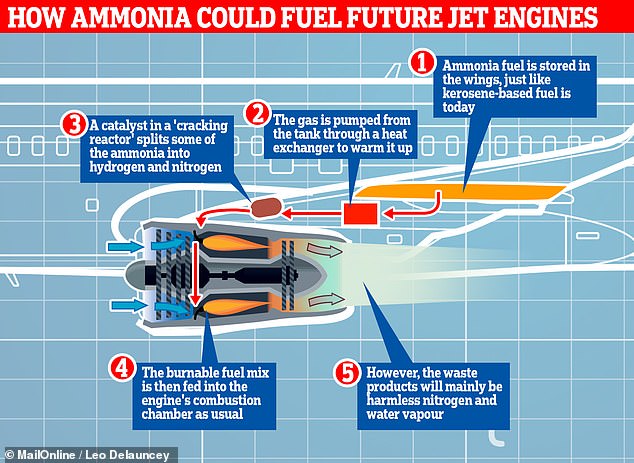 In order to be burned in a combustion chamber, ammonia needs to be mixed with hydrogen — which can be released from ammonia itself using heat and a catalyst. The researchers are proposing, therefore, to use a heat exchanger to warm up the fuel en route to the engine, followed by a so-called ‘cracking reactor’ to split some of the ammonia into hydrogen and nitrogen. The fuel mix can then be ignited to drive the engine, with the main waste products being nitrogen and water vapour

‘We’ve been living under clean skies for the past few months,’ he added.

‘It is becoming clear that there is going to be a real technology drive.’

At present, the team are looking to design the heat changers and cracking reactor — and are seeking funding to develop a small-scale, ground-based demonstration to show that such an engine could be started and throttled up successfully.

‘There’s no reason why, [with] the right funding, we couldn’t have a small-scale demonstrator ready to test within a matter of years,’ Dr Barth said.

The news follows a recent drive for the UK to slash its carbon emissions in the interests of mitigating climate change — with the Government having promised to reach net zero emission by the year 2050.

HOW BIOFUEL COULD POWER THE AIRCRAFT OF THE FUTURE

The flight, between London’s Heathrow and Amsterdam, used a fuel made from a mixture of Brazilian babassu nuts and coconuts which provided 20 per cent of the engine’s power.

‘This pioneering flight will enable those of us who are serious about reducing our carbon emissions to go on developing the fuels of the future,’ said CEO Richard Branson at the time.

many airlines are now looking into incorporate biofuels on commercial flights.

In 2011, Alaska Airlines operated 75 flights on a cooking oil blend.

In 2014, a Finnish airline used a mix of recycled cooking oil and jet fuel to power a long-distance flight.

Finnair said it will be able to reduce its net carbon dioxide emission by 50 to 80 per cent by switching to a more sustainable and environmentally-friendly fuel source.

But biofuel is more than twice the price of conventionally produced jet fuel and it is too costly for any airline to operate with it exclusively.

In 2017 a Chinese airline boss flew 186 passengers and 15 crew members from Beijing to Chicago with the help of recycled cooking oil.

Sun Jianfeng, the President of China’s largest private air carrier Hainan Airlines, was the captain of the 11-hour flight which flew across the Pacific on November 21.

The aircraft was powered by a combination of hydro-processed esters and fatty acids – a sustainable biofuel produced from used cooking oils – and conventional jet fuel.

By 2020 Qantas aims to have biofuel-based flights running regularly.