A rare red kiwifruit is set to land on the shelves of stores in New Zealand but it’ll come at a price.

Customers who tasted the ‘deliciously sweet’ berry-tinged fruit during a trial in New Zealand and Singapore found it to be ‘incredible’, leading horticultural company, Zespri, claims.

However, Zepsri says it’ll take about two years to produce enough of the new fruit for shoppers and it’ll cost a quarter more than the traditional green kiwi.

A green kiwifruit sells for about 95c in supermarkets.

The fruit had been on offer for a limited time after the trial and Zespir’s CEO, Dan Mathieson, said the feedback from customers was great.

‘After incredible feedback from our passionate consumers, we’re really excited to announce we will be making our new Zespri Red variety available to consumers, Mr Mathieson said.

‘This fruit has a deliciously sweet berry-tinged flavour and vibrant red flesh and we’re thrilled to see such strong demand from our initial limited sales release.’

The kiwifruit turned a vibrant red due to the pigment Anthocyanin, which Mr Mathieson said boosted cardiovascular and cognitive health.

What makes the kiwifruit red?

The pigment is an antioxidant which is also responsible for turning other fruits and vegetables blue and purple.

Mr Mathieson said New Zealanders can expect to see the fruit on sale for a limited release in 2020 and again in 2021.

The fruit is also expected to hit the shelves of stores in Asia as well as plans to extend into the Northern Hemisphere.

‘We know there’s a strong demand for a red kiwifruit and we’d love to get this fruit to our consumers sooner, but the fact that kiwifruit depends on nature’s cycles means it’ll take at least two years for the vines here in New Zealand to produce enough fruit to meet initial demand,’ Mr Mathieson said.

The red fruit is smaller than other green and gold kiwis and has a thinner skin. 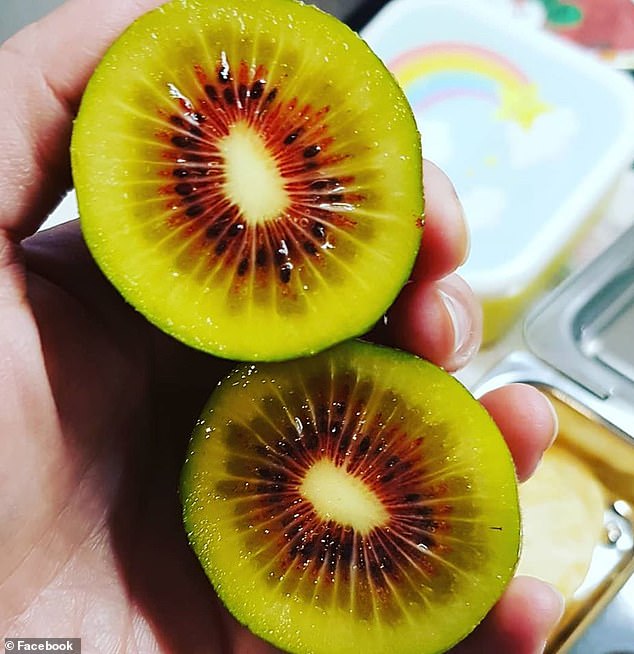