Zhou Guanyu has confirmed he has been given the medical all-clear after surviving a huge crash involving George Russell on the opening lap of the British Grand Prix at Silverstone.

The pair started eighth and ninth on the grid, and their two cars collided as they tried to go around the first corner, which caused them to go flying off the track.

Russell was able to leave his car quickly and appeared unharmed, but Zhou’s car flipped over several times as it flew across the gravel and over a barrier before smashing into a fence.

The Brit quickly spotted that his fellow driver was in trouble and ran over to try to help him, a heroic act which nevertheless saw Russell forfeit his opportunity to restart the race.

A host of medics also arrived on the scene quickly as they tried to get Zhou out of the car. His team, Alfa Romeo, confirmed afterwards that he did make it out safely, and was OK after the alarming scenes.

The 23-year-old went to a medical centre as a precaution after the high-speed collision, before Alfa Romeo confirmed that Zhou had not suffered any major injuries, but was still being kept in for observations. 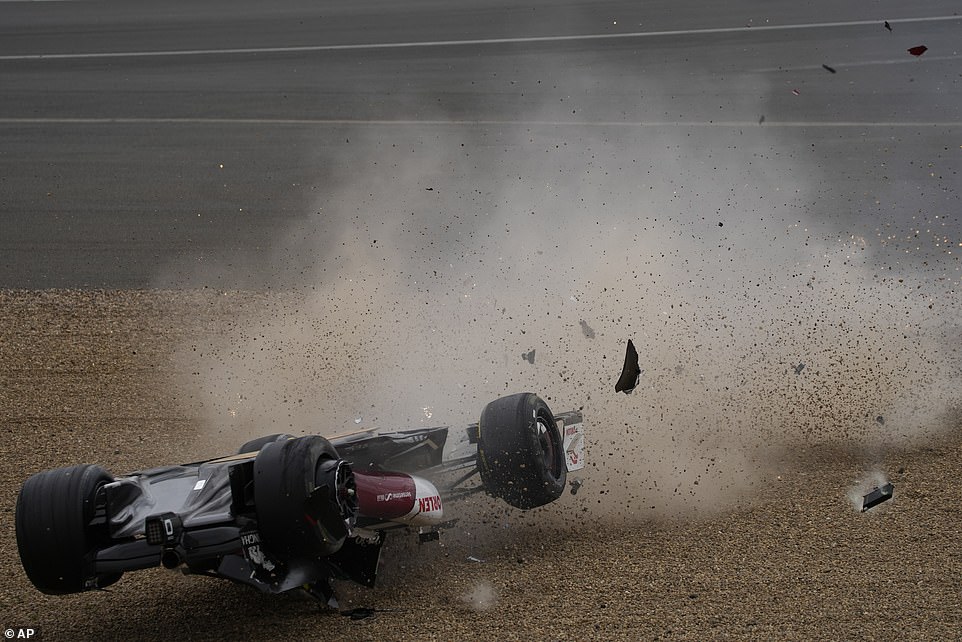 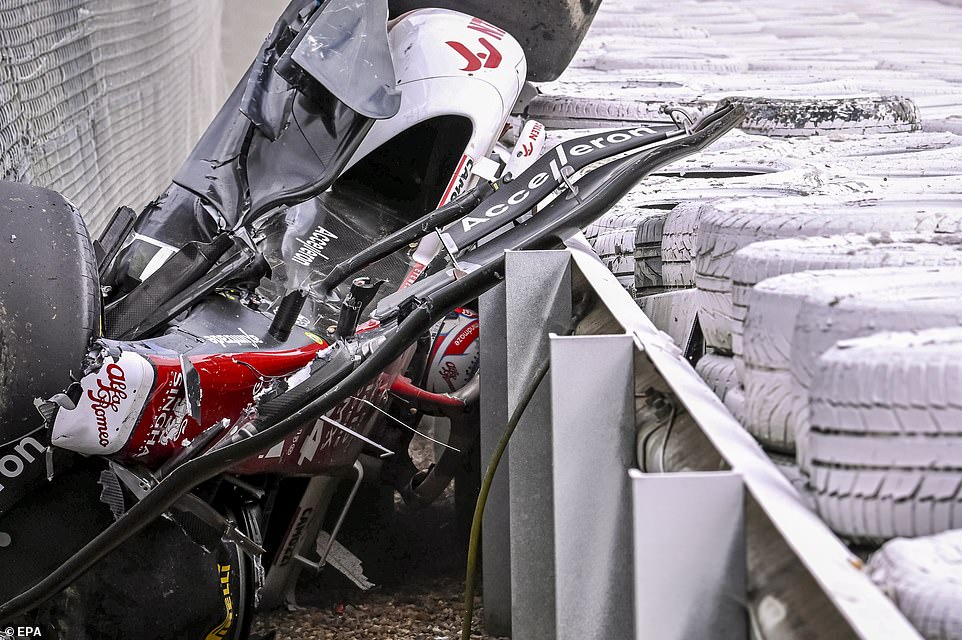 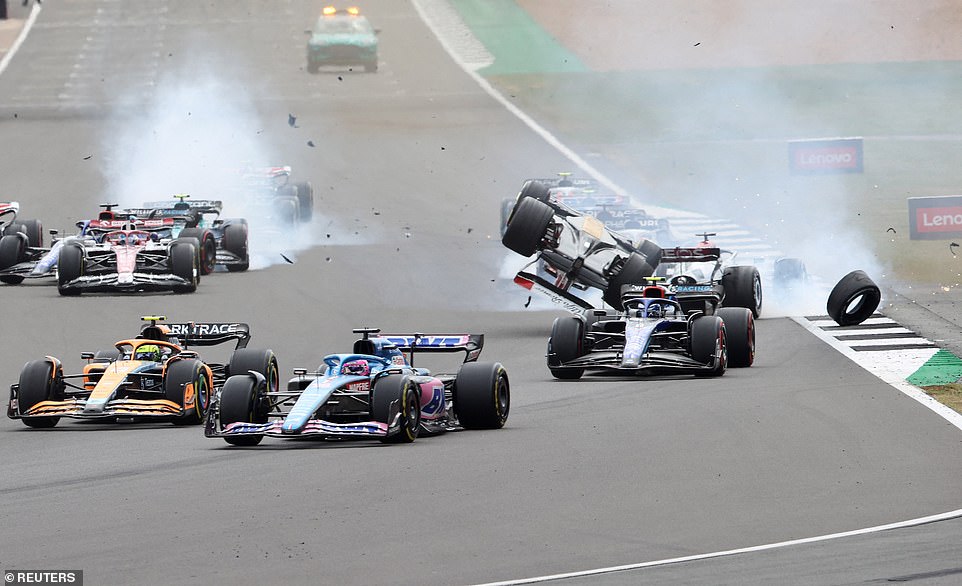 The crash caused chaos on the opening laps for other drivers, with multiple cars consequently spinning off the track 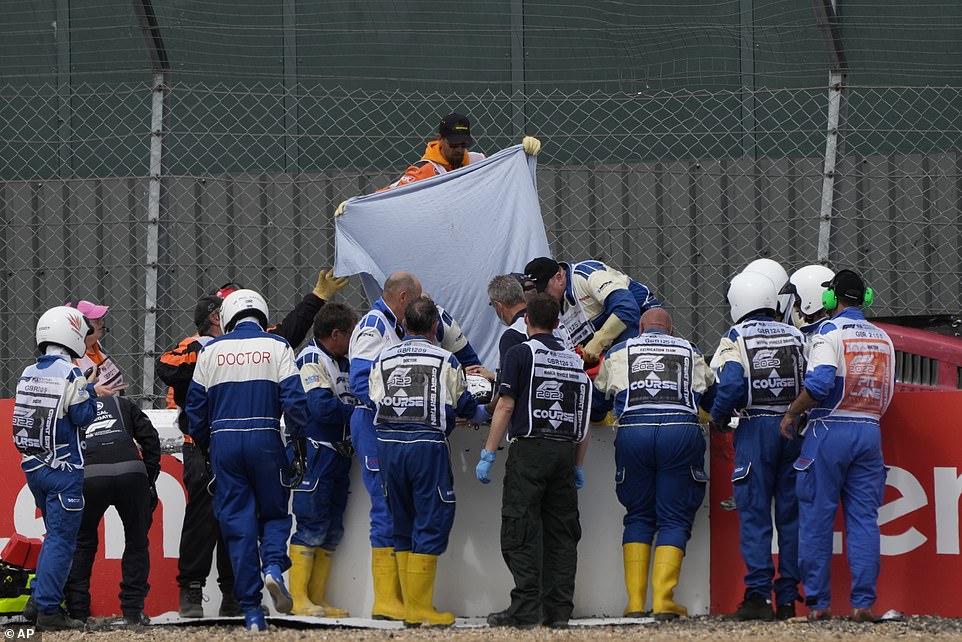 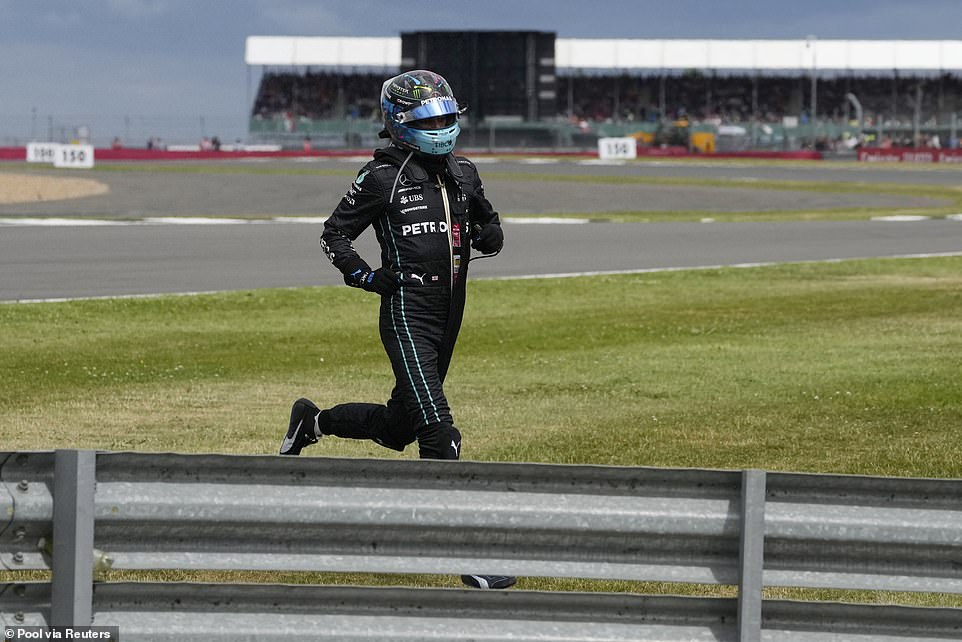 Mercedes star Russell also rushed over to try to help his fellow driver, but was unable to restart the race as a result

WHAT IS A HALO?

A three-pronged titanium bar that sits atop the cockpit to protect drivers when flipping over, as happened to Zhou Guanyu, or when another car lands on top of them, as was the case with Lewis Hamilton last year, or any other accident.

It was introduced at the start of the 2018 season and is now used in every FIA series, as well as other racing formats including IndyCar.

Once the race had restarted, they delivered another update, stating that Zhou had been released from the medical centre and he was later seen walking around the paddock at Silverstone.

Then on social media, Zhou confirmed he was fine, posting a message along with a selfie: ‘I’m OK, all clear. Halo saved me today. Thanks everyone for your kind messages!’

Russell gave his reaction to the incident afterwards, as he told Sky Sports: ‘I’m glad to see Zhou okay. It was an horrific incident.’

Russell wanted to continue, but having got out of his car, it was decided by the FIA that he would not be able to complete the race.

This means that Russell will fail to finish inside the top five of a Grand Prix for the first time this season following his selfless act.

‘I jumped out of the car to see that Zhou was ok. When got back to car I couldn’t restart it. As soon as you get outside assistance you cannot restart the race,’ Russell said as he reflect on being ruled out of the remainder of the race.

The Mercedes team also sent out a tweet in the aftermath of the incident, posting a message which read: ‘First of all, the most important thing is that Zhou is ok.

‘That was a scary incident and all credit to the marshals and medical team for their quick response.

‘Obviously gutted to end the race this way and I’m sorry for the team and the fans. Cheering LH (Lewis Hamilton) on from the garage,’ he wrote. 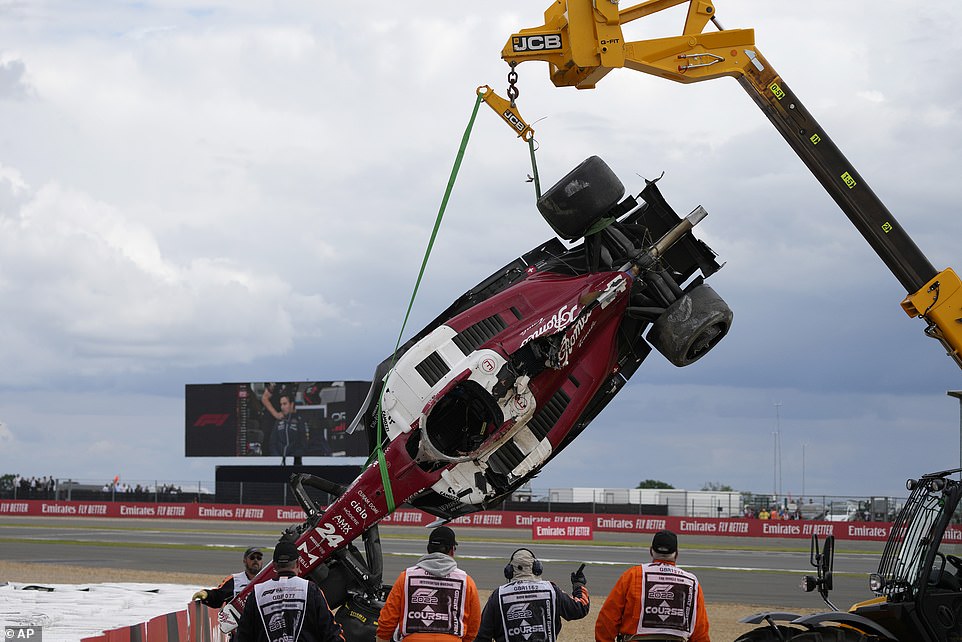 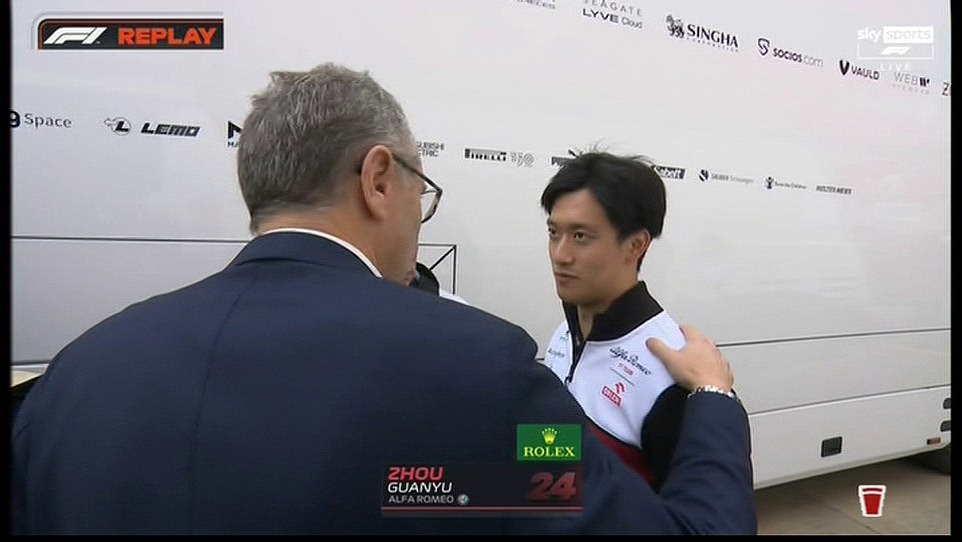 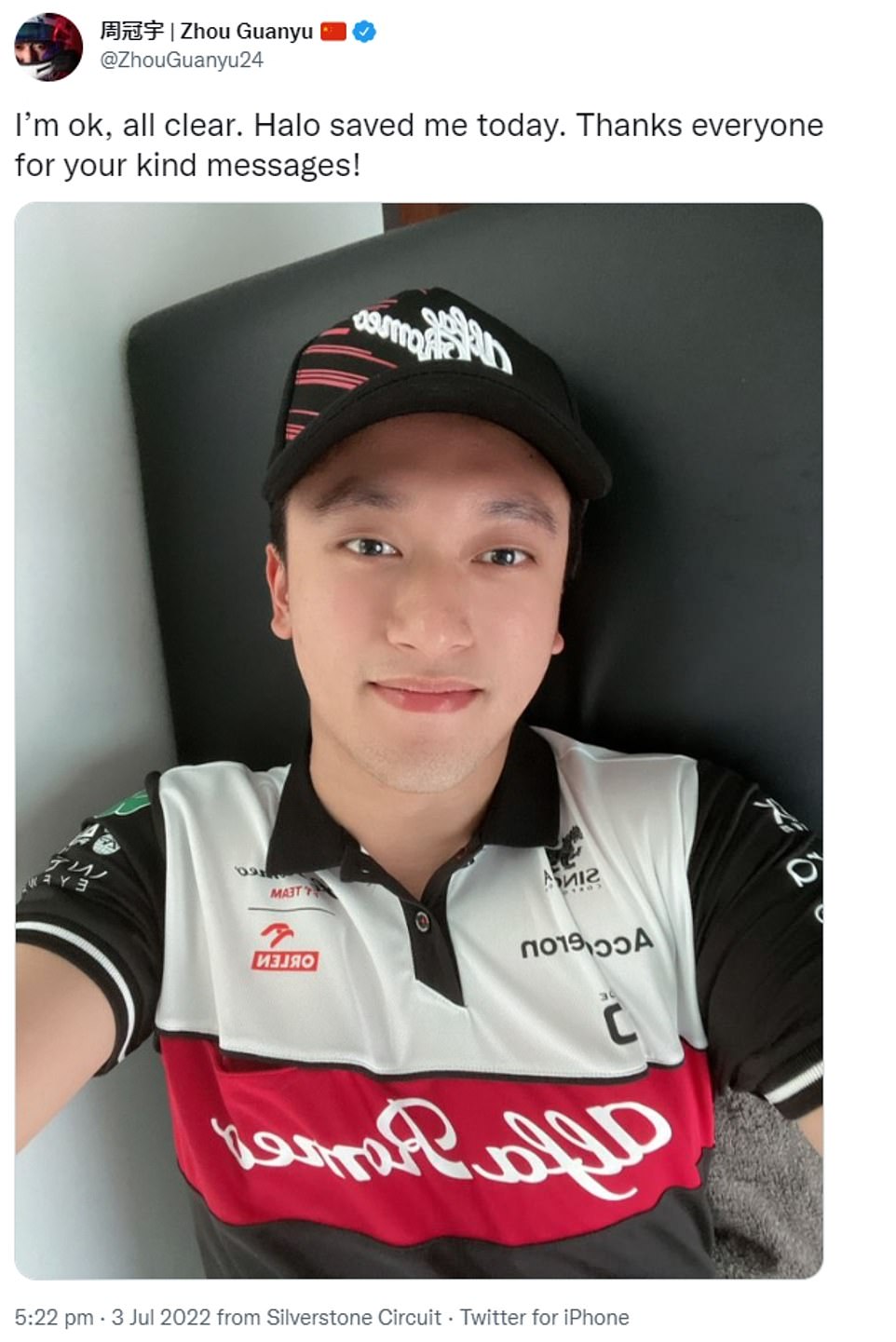 Following the incident, the race was red-flagged while race officials cleared the track and ensured that Zhou and Guanyu were uninjured.

Alex Albon was also caught up in the crash on the opening lap, and was unable to continue once the race resumed.

Race control decided to restart proceedings with the same starting grid as qualifying, minus the drivers involved in the crash.

There was also a horrifying crash during the F2 race earlier in the day, with Dennis Hauger’s car being launched into the air.

The car fell on driver Roy Nissany, but fortunately he was protected by his halo – a protective bar that was introduced into racing back in 2018.

The two drivers managed to walk away from the incident unharmed. 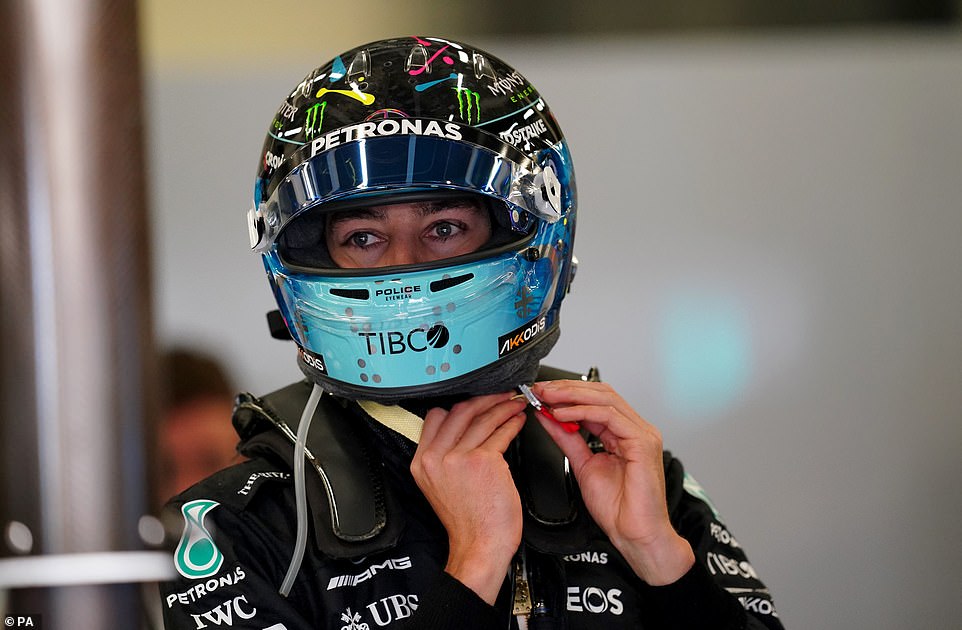 Russell was not be involved in the restart, and therefore missed out on a top-five finish for the first time this season