The former first lady of Zimbabwe, Grace Mugabe, is reportedly being investigated by police over claims she headed up an ivory poaching network which illegally exported tonnes of elephant tusks, gold, and diamonds from the country.

Mrs Mugabe wielded substantial power until her husband, Robert Mugabe, was forced to quit as President last November when the military stepped in and ZANU-PF lawmakers launched impeachment proceedings against their once beloved leader.

A senior official in President Emmerson Mnangagwa’s administration said he ordered the ‘urgent’ investigation after ‘very strong’ evidence was uncovered by Adrian Steirn, an Australian photojournalist.

The former first lady of Zimbabwe, Grace Mugabe (pictured), is reportedly being investigated by police over claims she headed up an ivory poaching network which illegally exported tonnes of elephant tusks, gold, and diamonds from the country

Undercover footage filmed by Mr Steirn reportedly captures several sources, such as suspected poachers, stating how Mrs Mugabe smuggled ivory poached in national parks out of the country by using an exemption from airport security screening as first lady.

Reports also suggest that the security loophole extended to cargo shipments of the former first lady’s.

Mr Steirn posed as a customer for contraband ivory in a four-month operation to try and infiltrate the poaching networks around the country’s national parks. He started the investigation after discovering rumours about the former first lady’s involvement in the trade.

Mrs Mugabe was named by two suspected poachers as the alleged leader of an illegal operation. They were later arrested by police after offering to sell Mr Steirn tusks in February, reported the Telegraph. 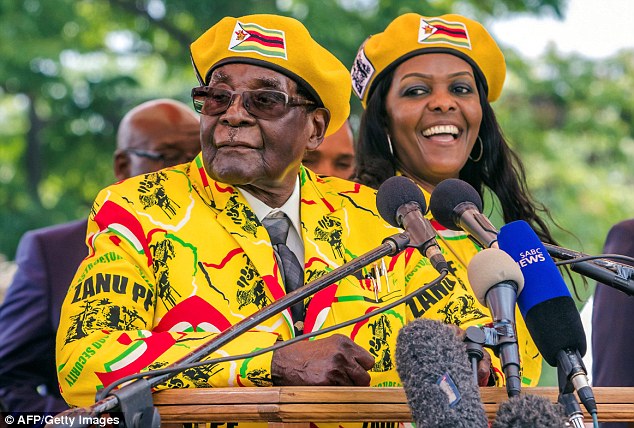 Robert Mugabe pictured with his wife Grace addressing a ZANU-PF party members, shortly before he was ousted from office

‘For years I’ve been documenting the frontline poachers who end up serving 20 years for shooting a giraffe. Meanwhile, she was taking billions of dollars out of the country,’ Mr Steirn told the newspaper.

Christopher Mutsvangwa, a special adviser to Mr Mnangagwa, said he had ordered the investigation into high-profile figures such as Mrs Mugabe based on Mr Steirn revelations.

He added that currently there is no implication that Mr Mugabe himself was involved in the smuggling but that evidence pointed to high-ranking members of his security group and that the crimes also involved moving rhino horn, diamonds and gold.

Mr Mugabe often travelled for health care treatment to Singapore from Harare and at the same time as one of his trips, where he was often accompanied by his wife, 200g of ivory was seized at the airport on December 11.

Mrs Mugabe’s alleged buyers have not been identified, yet the customers are suggested to be organised groups of criminals based in China and Malaysia.

The former first lady, who has not yet been charged, reportedly did not respond to requests for comment. 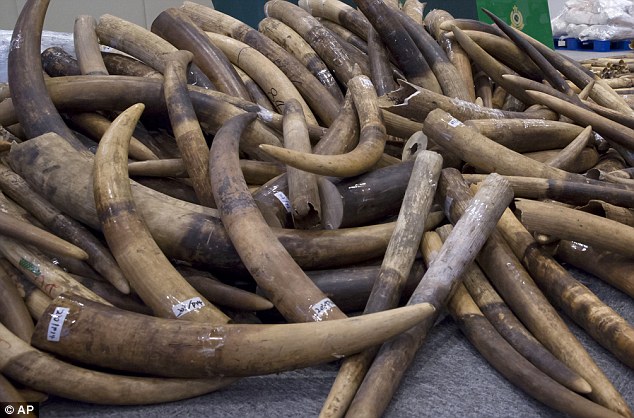 Yet a close family friend, Father Fidelis Mukonori, said he discussed the allegations with her, to which she replied she was ‘unconcerned. She said it doesn’t matter.’

The results of Mr Steirn’s investigation has not come as a shock for some researchers, who say official corruption is what has fuelled poaching across the continent.

‘Corruption is key all along the supply chain,’ said Lucy Vigne, a leading researcher into the smuggling of illegal ivory and rhino horn from Africa.

‘Officials may turn a blind eye for bribes or collude with the criminal traders in illegal wildlife trade activities themselves.’

Mrs Mugabe was known for her high amount of spending during her nearly 20 years as first lady, such as her estimated £10 million worth of luxury properties, despite her husband earning around $20,000 a month.