The Frenchman called an unexpected press conference on Thursday afternoon to reveal that he will be leaving after two-and-a-half years in charge.

The 45-year-old revealed that he feels this is the right time to go despite being a legend as both a player and a manager.

Former Arsenal manager Arsene Wenger and Chelsea’s Antonio Conte are the early front-runners to take over. 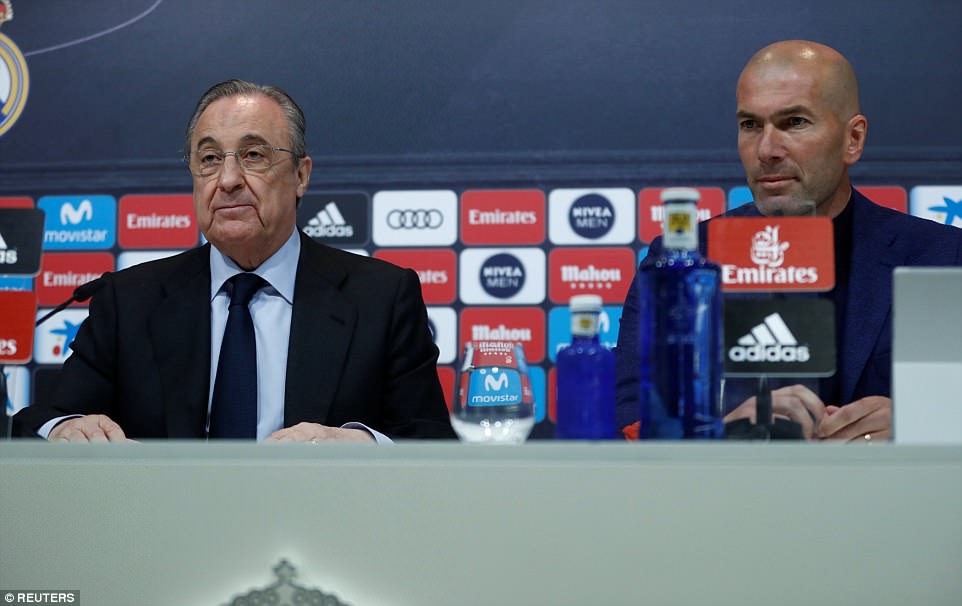 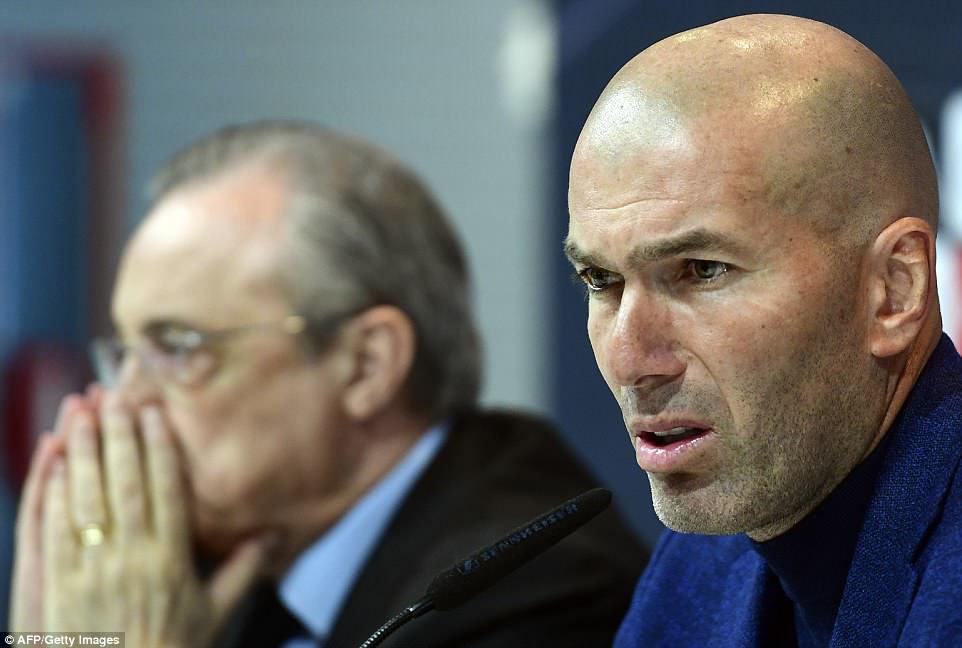 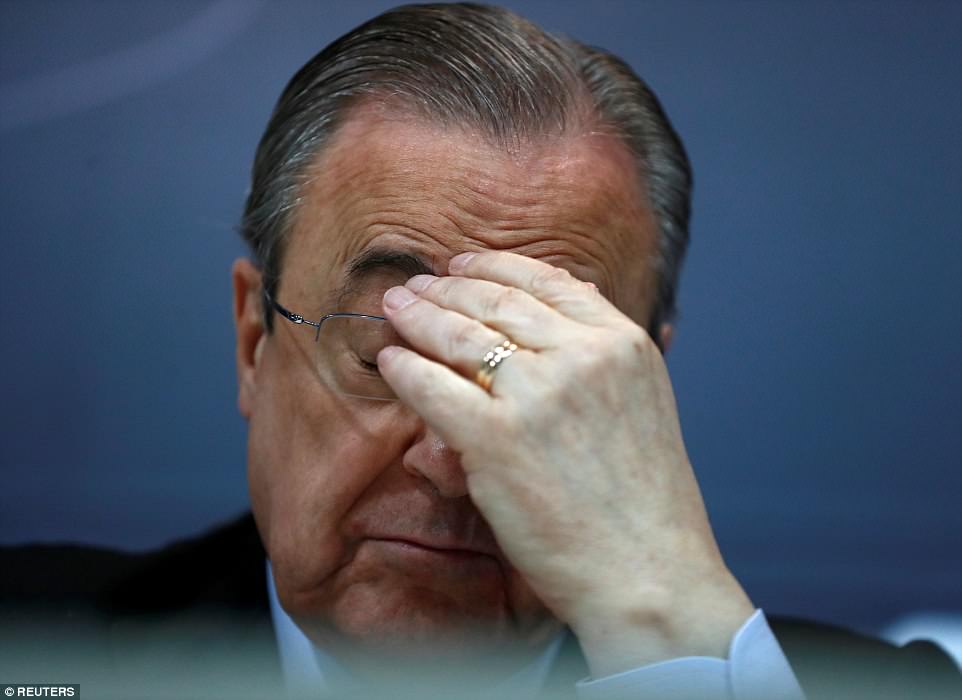 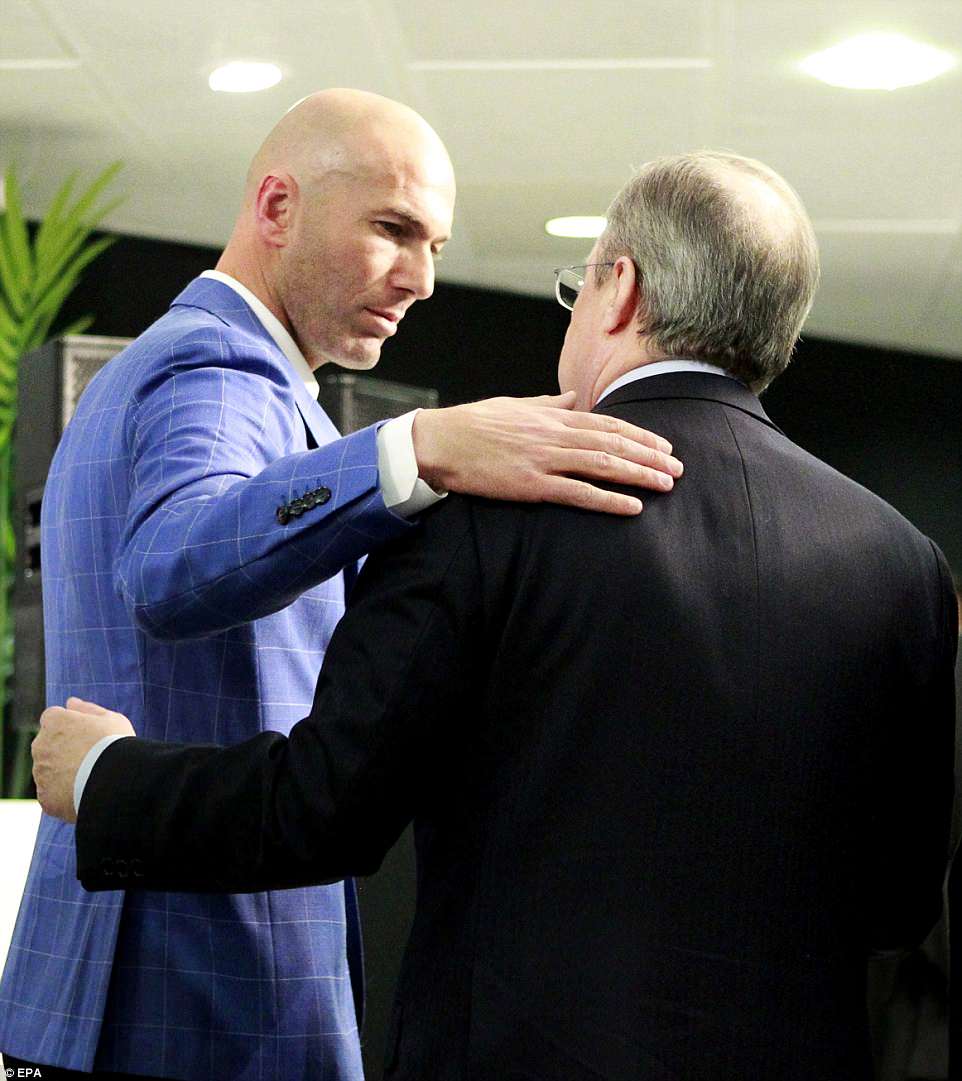 Appearing alongside Real president Florentino Perez, Zidane said: ‘I have taken the decision to not continue going into the next season. For me and for everybody, I think the moment to change has arrived. It was not an easy decision.’

Zidane told club president Florentino Perez of his plans on Wednesday as he believes the team needs a change.

‘I love this club, I love the president,’ he said. ‘He gave me the opportunity to come as a player and now manager and I am eternally grateful.

‘But we have to change.’

‘This is a beautiful moment as we have just won a third straight Champions League and I have now reflected and made this decision. Even the players need this change, I must thank them too.’

Zidane went on to talk about his best moments at the Bernbeu and described winning the league as ‘the top’ of his list.

‘The most beautiful moment was when the president brought me to play for this great club,’ he said. ‘If there’s one as a coach, it was winning La Liga. For me that was the top.

‘This year the worst was losing the game against Leganes in the second leg of the Copa del Rey. I won’t use the word but you know it.’ 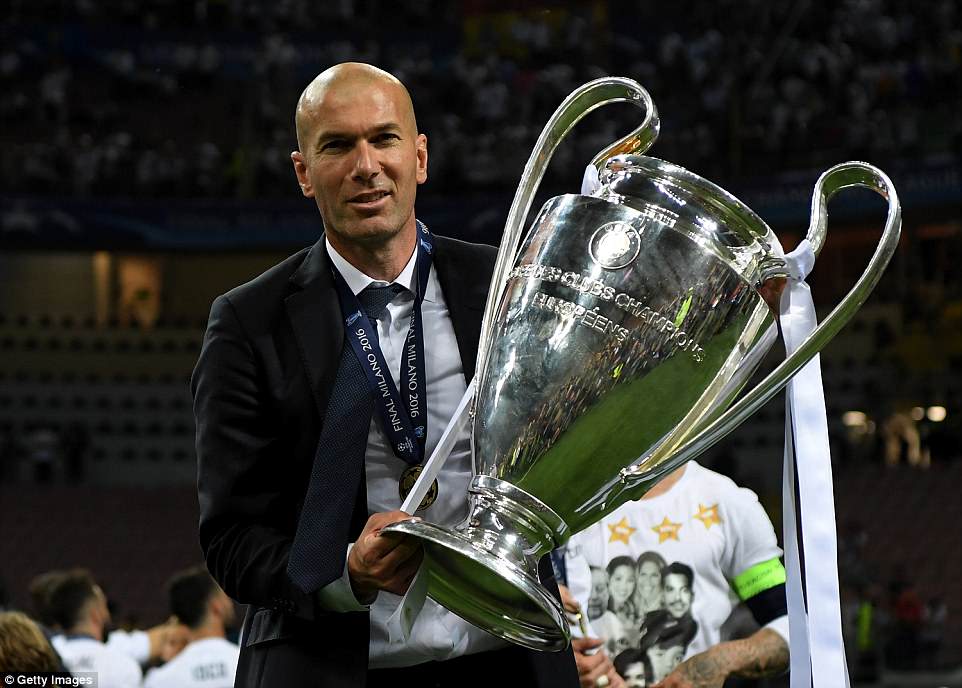 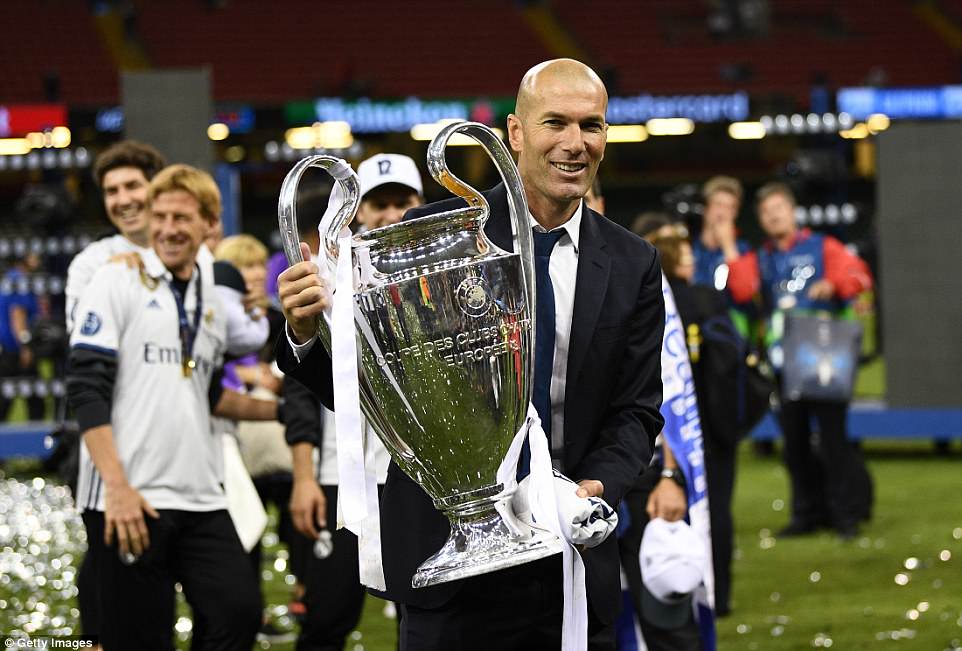 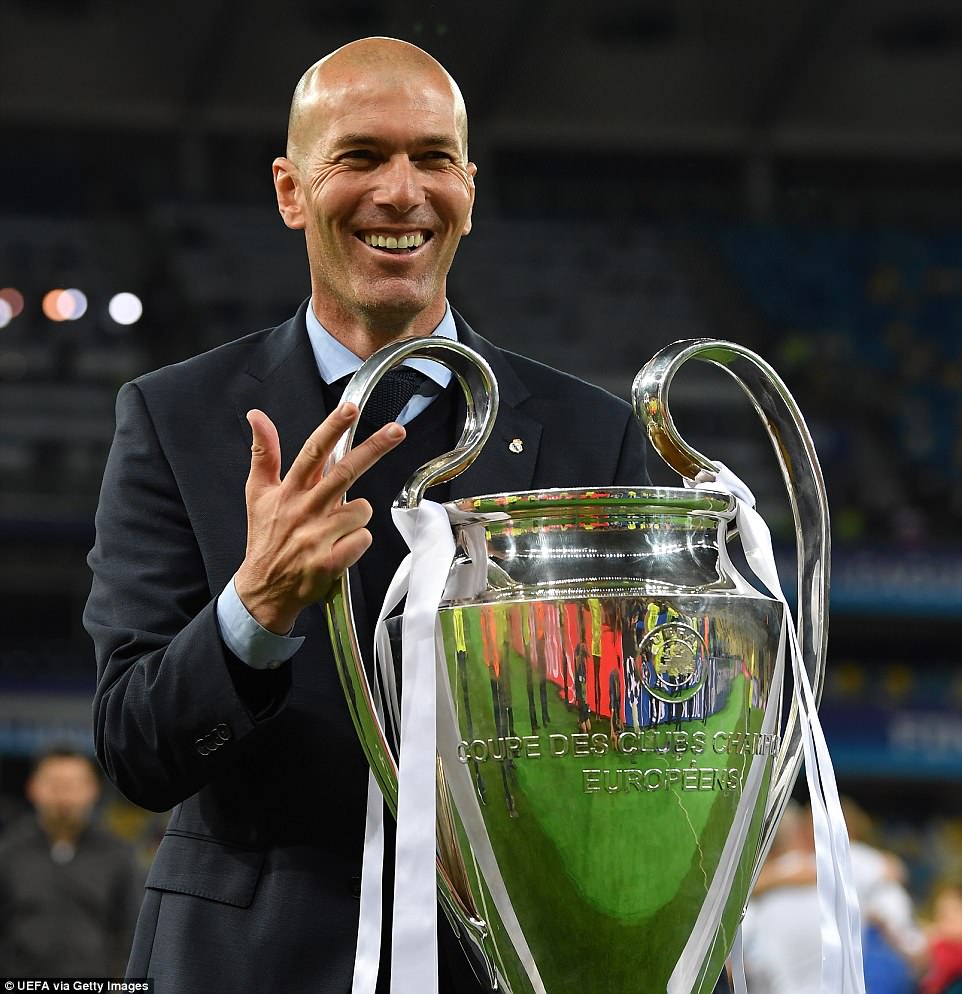 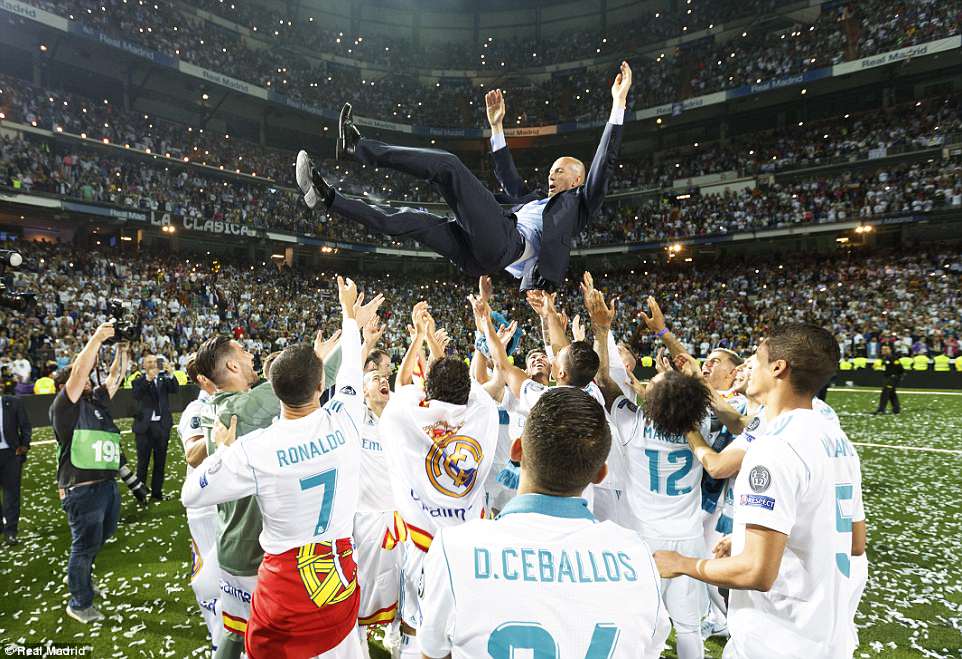 Perez said Zidane’s decision to leave was unexpected: ‘After winning the Champions League, the decision was unexpected,’ he said. ‘It is a sad day for me, the fans and the players.

‘But he knows I wanted him as a player and as a manager. I wanted him to stay forever and I wanted to convince him to stay. But I know it was his final decision. All I want to do is remind him that this club is his home and family.’

Perez continued: ‘I went to his house yesterday [Wednesday] to see if he was prepared. He told me that he was convinced he wanted to go.

‘I want to thank him for his commitment and passion to Real Madrid. His behaviour has always been an example for all and representative of Real. I don’t want this to be a goodbye but a “see you soon”. I have no doubt he will come back soon.’

Zidane insisted the club needed a change despite their continued success in Europe: ‘I think the players need a change but I should thank them because at the end of the day it’s them that fight out there and this is a club of very high expectations.

‘We always want more and more, I couldn’t ask for more from these players but now is the time for them to have a different voice in the changing room. The squad already knows. I’ve not talked to them all individually but they all know, by message, yes. I spoke with the captains and with Sergio Ramos.’

Zidane insisted that he wouldn’t be taking on another job following his decision to quit Real: ‘I’m not going to coach another team right now. I’m not looking for another team.’ 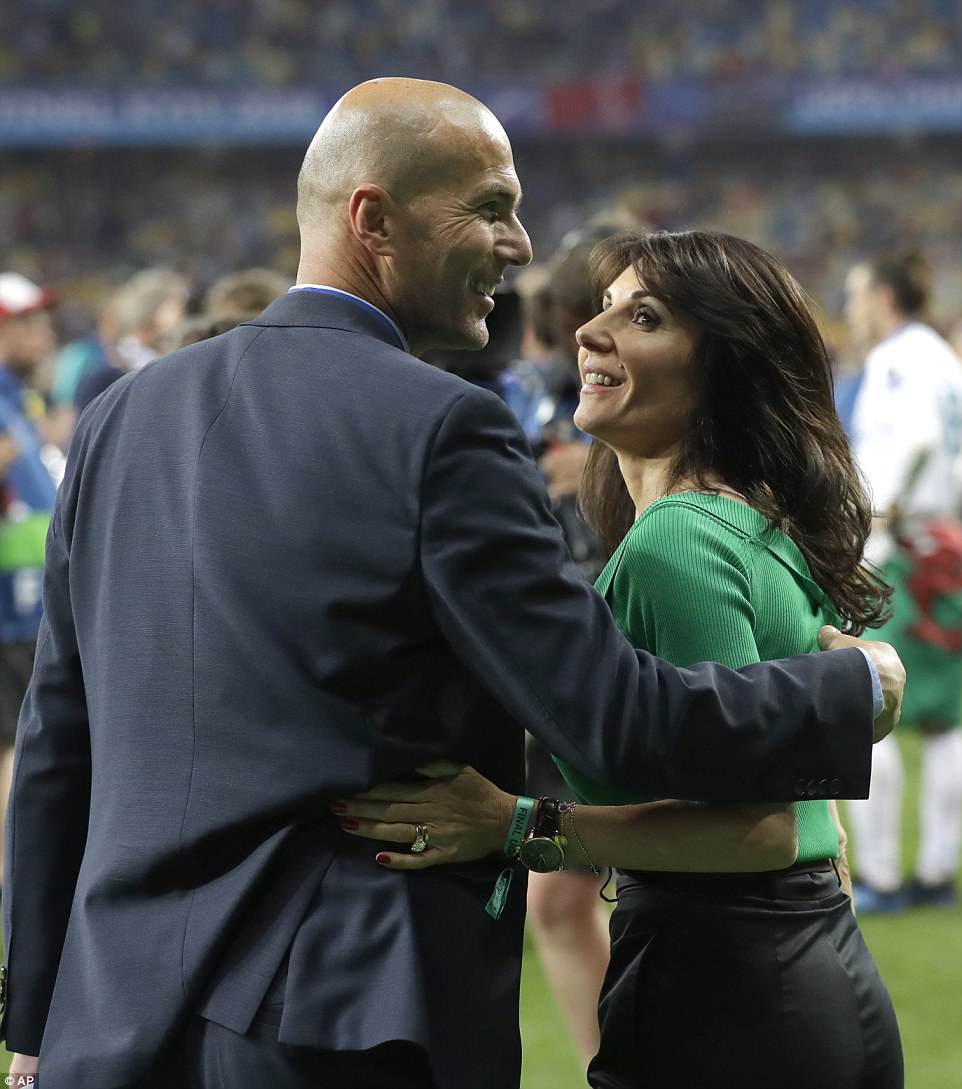 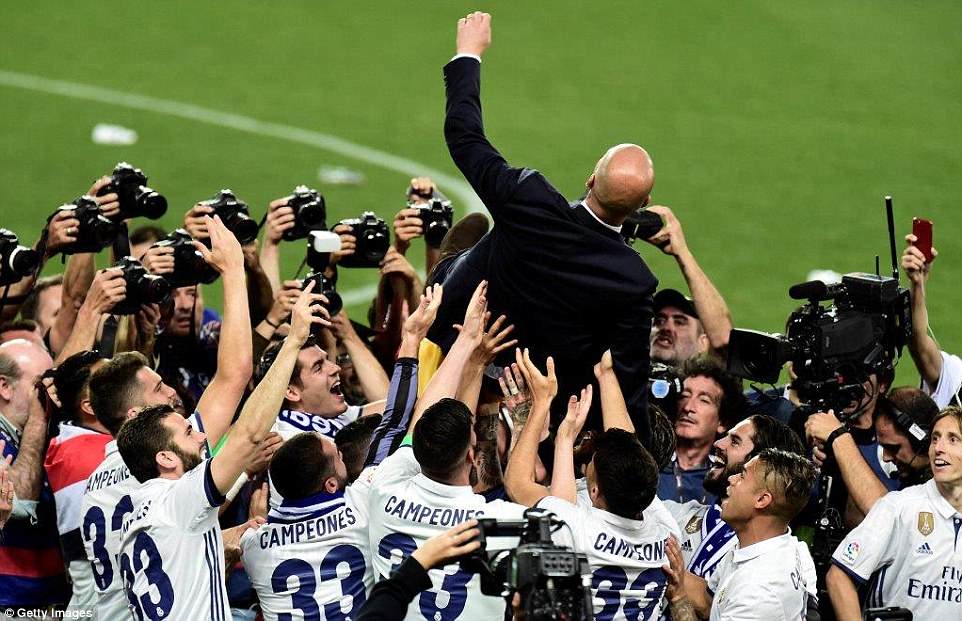 The quest to find a high-profile successor will now commence: Tottenham boss Mauricio Pochettino, former Arsenal manager Wenger and the Italian Maurizio Sarri, most recently of Napoli, have all been linked with the Bernabeu hotseat.

Wenger and Conte are the bookies favourites to replace Zidane at Real.

Zidane, the former Real, Juventus and Bordeaux midfielder, was understood to be under contract in Madrid until 2020.

Stepping up from managing the ‘Castilla’ B team, he replaced Rafa Benitez in January 2016 and although Real were runners-up to Barcelona at the end of the league campaign, he toasted European glory as city rivals Atletico Madrid were vanquished after a penalty shootout in Milan.

Zidane followed up his maiden Champions League crown as a coach with a La Liga title and in June 2017 his side delivered a more emphatic European Cup final triumph as his former employers Juve were humbled 4-1 in Cardiff. 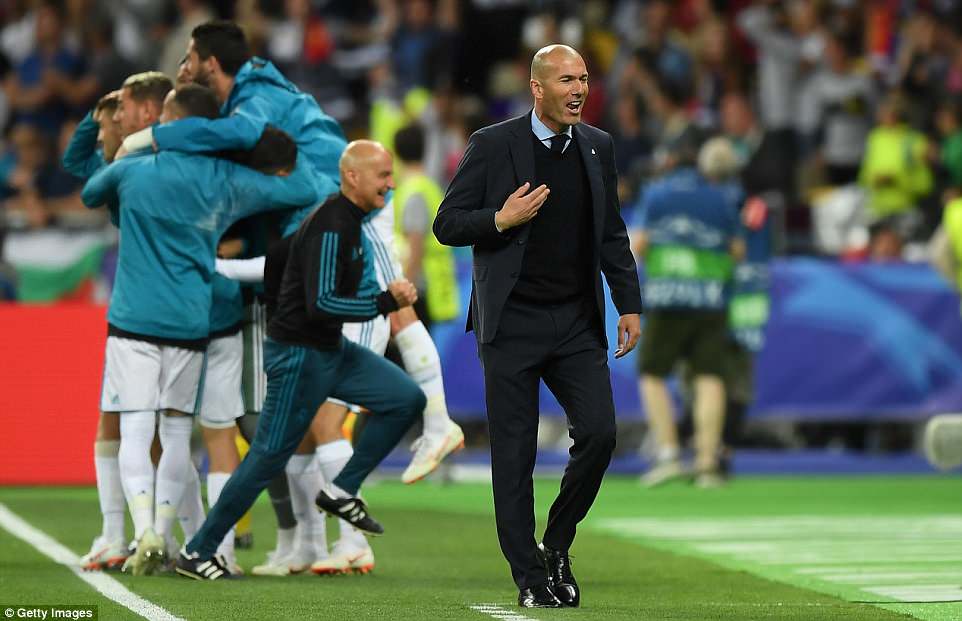 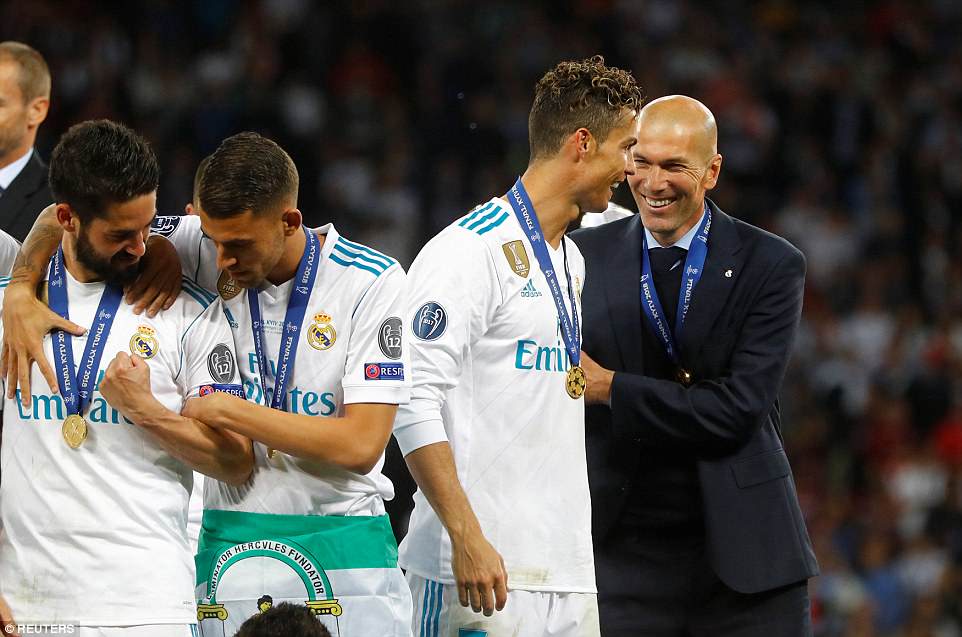 WHO WILL BE THE NEXT REAL MANAGER?

Zidane called a surprise press conference on Thursday afternoon where he revealed he has stepped down from his role as head coach after a two-and-a-half-year spell.

And Conte, whose future at Chelsea is far from certain, is in the running to take up the reins at the Santiago Bernabeu.

Former midfielder Guti, who played for the club between 1995 and 2010, is joint favourite with Conte at 4/1.

Guti is employed by the club as a youth coach but could be promoted to the senior team if president Florentino Perez decides to put his faith in him.

Arsene Wenger, who rejected overtures from Real Madrid during his time at Arsenal, is also a leading contender to replace his compatriot at 6/1.

Juventus coach Massimiliano Allegri and former Napoli boss Maurizio Sarri, who has been linked with Chelsea, are both priced at 8/1 with SkyBet.

Tottenham fans will be worried at seeing Mauricio Pochettino at just 10/1 despite the Argentine signing a new five-year deal.

Reports suggest his contract stipulates he can speak to Real Madrid or Paris Saint-Germain if they make a move to hire him.

Although Real lost only two of their first 15 league matches in the recently concluded Spanish championship, Ernesto Valverde’s Barca were able to run away with the league following their vital 3-0 El Clasico win at the Bernabeu in December.

Zidane did stabilise results and duly blazed a trail to Kiev in the continental competition, but reports of dissatisfaction with his approach to domestic matters – namely the handling of star forward Gareth Bale, who has publicly expressed his own unhappiness with a reduced role – meant for regular reports of a potential summer exit.

He had an incredible record with the club statistically speaking.

Zidane won 70 per cent of his league games as boss and has only lost four Champions League matches during his tenure.

In all competitions, Zidane just about matched his league record, having won 69 per cent of all the games he had been in charge of.