BISMARCK, N.D. (AP) – Interior Secretary Ryan Zinke faced protests and a heckler Wednesday as he delivered a message of government cooperation at a large energy industry conference in North Dakota.

Zinke told the crowd at the Williston Basin Petroleum Conference in Bismarck that government needs to be a better partner with the energy industry. His speech echoed one he gave at another major industry conference in Houston in March.

“We have to work with industry,” he told the crowd at the three-day oil expo that drew an estimated 2,500 people to the city just outside western North Dakota’s prolific Bakken oil patch. “Our regulation needs to improve innovation, best science, best practices, in a regulatory framework that should ensure greater safety, greater reliability and better environmental stewardship.”

Alex Hilzendeger, 19, of Bismarck, stood up about midway through Zinke’s speech and began shouting at him, accusing him of listening only to “fossil fuel billionaires and campaign donors” and asking why he doesn’t “stop methane waste.”

The Trump administration is trying to reverse rule a rule imposed under former President Barack Obama requiring energy companies to capture methane gas instead of burning it or wasting it at drilling sites on public lands. A federal judge in Wyoming in April halted the rule, but environmentalists have appealed.

Hilzendeger was removed by security but not arrested. He said outside the conference that he was not with a specific group but was just concerned that the Trump administration is too cozy with energy companies.

The Montana-based Western Values Project on Wednesday criticized Zinke’s appearance at the conference, saying “we’d all be better off if Secretary Zinke spent as much time defending public lands as he does glad-handing with the special interests who have filled his campaign coffers and profit off of our public lands.”

Zinke in his remarks briefly touched on criticism levied at the administration, joking that being interior secretary was harder than being a Navy SEAL, as he once was, because “when people shot at you as a SEAL, you could shoot back.”

Zinke contended that “nobody does it better than America” when it comes to producing energy in an environmentally sound way.

“It is better to produce energy here under reasonable regulation than watching it produced overseas with none,” he said. “If you don’t believe me … I’ll take you on a tour of Africa and the Middle East and I’ll show you how not to produce energy, (how) not to hold companies accountable.”

The project is going through a permitting process that is state-based, not federal, but Schafer said Zinke should still take a stance against Meridian Energy Group’s proposed Davis Refinery if he truly believes the energy industry can be a good corporate neighbor.

“Putting an oil refinery next to a national park is not being a good neighbor,” Schafer said.

Zinke told reporters during a tour of the park on Tuesday that he is gathering facts about the refinery project and “we’ll assess it when the facts become clear.” He did not commit to intervening. 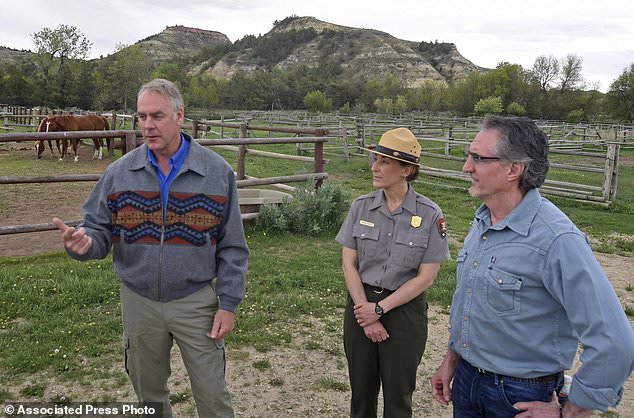 Secretary of the Interior Ryan Zinke, left, speaks at Peaceful Valley Ranch in Theodore Roosevelt National Park on Tuesday, May 22, 2018 while touring the area with park superintendent Wendy Ross, center, and North Dakota governor Doug Burgum, right. Peaceful Valley is near Medora and dates to 1885 and overlooks the Little Missouri River and Badlands of western North Dakota. (Tom Stromme/The Bismarck Tribune via AP) 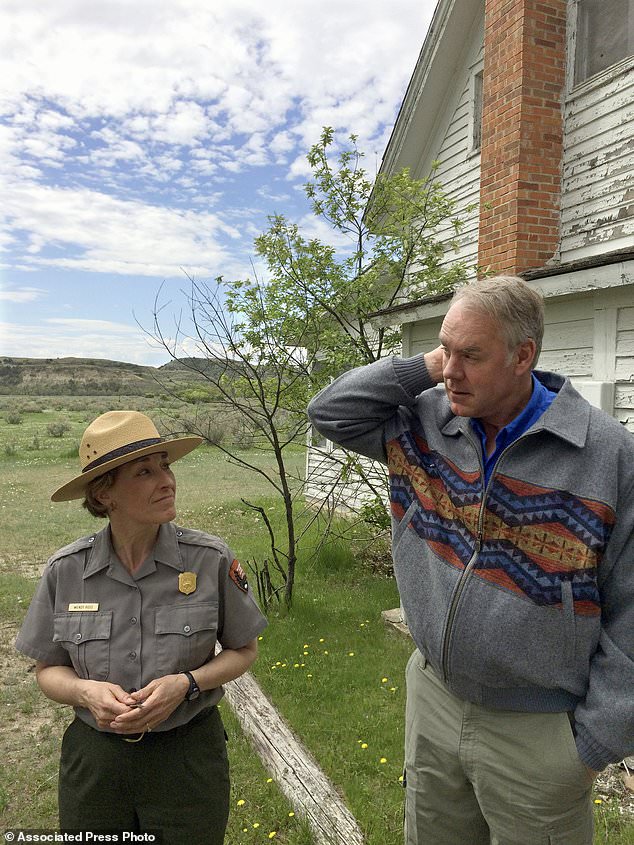 U.S. Interior Secretary Ryan Zinke, right, speaks with Theodore Roosevelt National Park Superintendent Wendy Ross during a visit to the park in western North Dakota on Tuesday, May 22, 2018. Zinke reiterated his support for addressing a maintenance backlog at national parks during a visit to the one named for the U.S. president known for being a champion of conservation. (AP Photo/Blake Nicholson)