Zoe Saldana has admitted she ‘never should’ve played Nina’ Simone in the 2016 biopic about the legendary singer, a role where she was criticized for wearing a prosthetic nose and darkening her skin.

In an interview with Pose creator Steven Canals, the actress who is of Dominican and Puerto Rican descent discussed how the Afro-Latinx community is marginalized and the struggles of acknowledging their identity via mixed heritage.

At one point during the nearly hour-long chat she got tearful about her controversial decision to take on the part in the motion picture directed by Cynthia Mort.

‘I should have never played Nina,’ she said. ‘I should have done everything in my power with the leverage that I had 10 years ago, which was a different leverage, but it was leverage nonetheless.

‘I should have done everything in my power to cast a black woman to play an exceptionally perfect black woman.’ 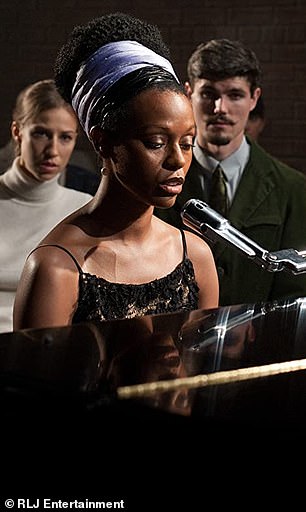 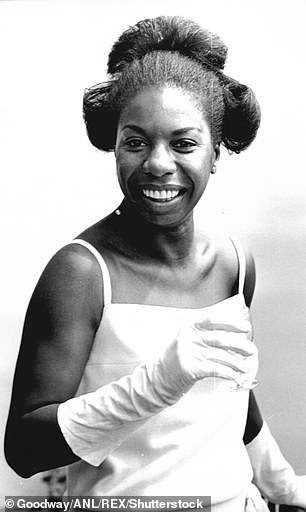 After she was cast, many fans pointed to Simone’s work as a civil rights activist and actively battling colorism because Saldana’s skin was darkened and she wore a prosthetic nose (left)

She took the Nina part amid conversation about how darker actresses struggle to land roles in Hollywood. Meanwhile Saldana had appeared in Avatar, Stark Trek and Guardians of the Galaxy.

However she didn’t delve into the topic of colorism when talking about her own part in the debate surrounding prejudices within the Black communities.

‘I thought back then that I had the permission [to play her] because I was a black woman,’ Saldana said.

‘And I am. But it was Nina Simone. And Nina had a life and she had a journey that should have been – and should be – honored to the most specific detail because she was a specifically detailed individual.’

‘With that said: I’m sorry. I’m so sorry. I know better today and I’m never going to do that again,’ Saldana said tearfully.

‘She’s one of our giants and someone else should step up. Somebody else should tell her story… I’m sorry, I’m so sorry because I love her music.’ 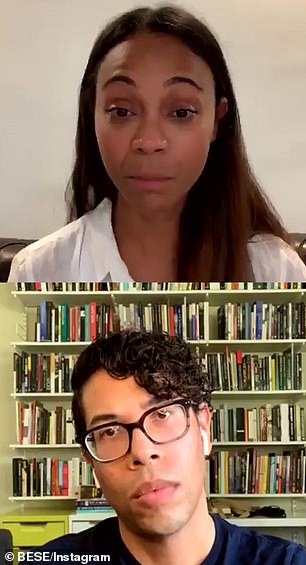 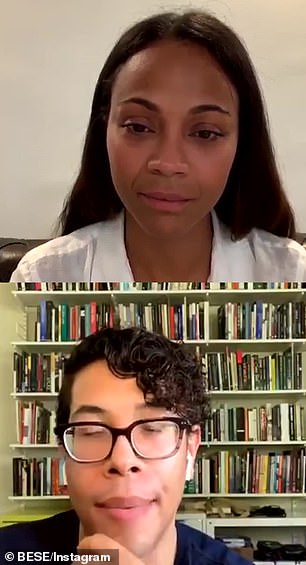 Leverage: ‘I should have never played Nina,’ she said. ‘I should have done everything in my power, with the leverage that I had 10 years ago — which was a different [amount of] leverage, but it was leverage nonetheless’ 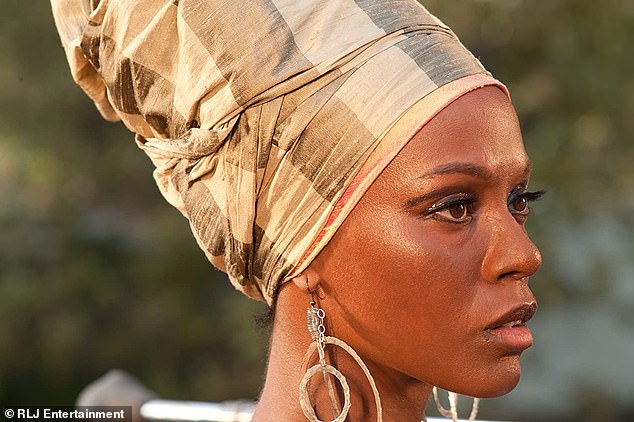 Along with criticism for Saldana’s casting, the movie also faced criticism from the jazz singer’s daughter Lisa Simone Kelly, who highly criticized the ‘inaccurate’ story 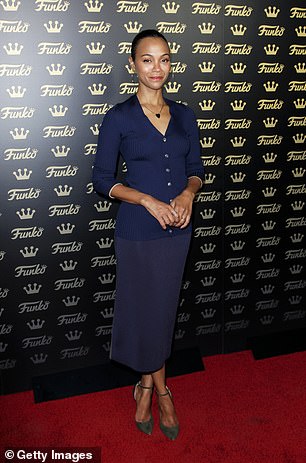 She took the Nina part amid conversations about how darker actresses struggle to land roles in Hollywood. Meanwhile Saldana had appeared in Avatar, Stark Trek and Guardians of the Galaxy

One of Simone’s songs ‘Four Women’ talks about the the difficulties darker skinned black women face compared to lighter skinned.

‘My skin is brown/My manner is tough/I’ll kill the first mother I see/My life has been too rough/I’m awfully bitter these days/Because my parents were slaves.’

In 2012 Simone’s daughter showed opposition to the casting of Saldana as the legend who died in 2003.

‘I love Zoe Saldana, we all love Zoe… From Avatar to Colombiana, I’ve seen those movies a few times.

‘But not every project is for everybody. And I know what my mother would think. I just don’t get it.’

Saldana previously defended her casting as Simone in multiple interviews, at the time taking issue was ‘not being black enough’ for the role, which she felt was the criticism.

‘Let me tell you, if Elizabeth Taylor can be Cleopatra, I can be Nina – I’m sorry,’ she told Latina magazine in 2013. ‘It doesn’t matter how much backlash I will get for it. I will honor and respect my black community because that’s who I am.’

Simone’s daughter told Time in 2016: ‘There are many superb actresses of color who could more adequately represent my mother and could bring her to the screen with the proper script, the proper team and a sense of wanting to bring the truth of my mother’s journey to the masses.’

In March 2016 when she tweeted a Nina Simone quote, the official account of the jazz singer responded: ‘Cool story but please take Nina’s name out your mouth. For the rest of your life.’ 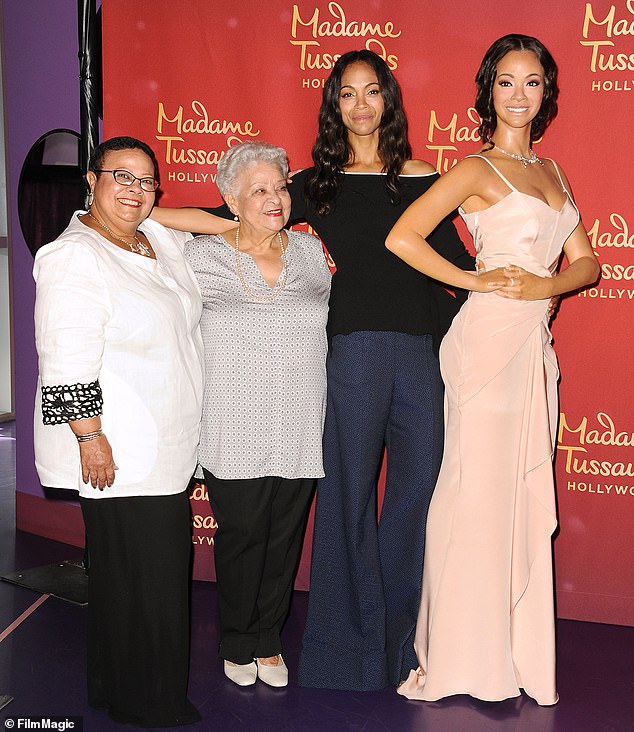 Saldana is of Dominican and Puerto Rican descent. She poses with her mother Asalia Nazario and grandmother at the unveiling of her wax figure at Madame Tussauds on April 7, 2017 in Hollywood 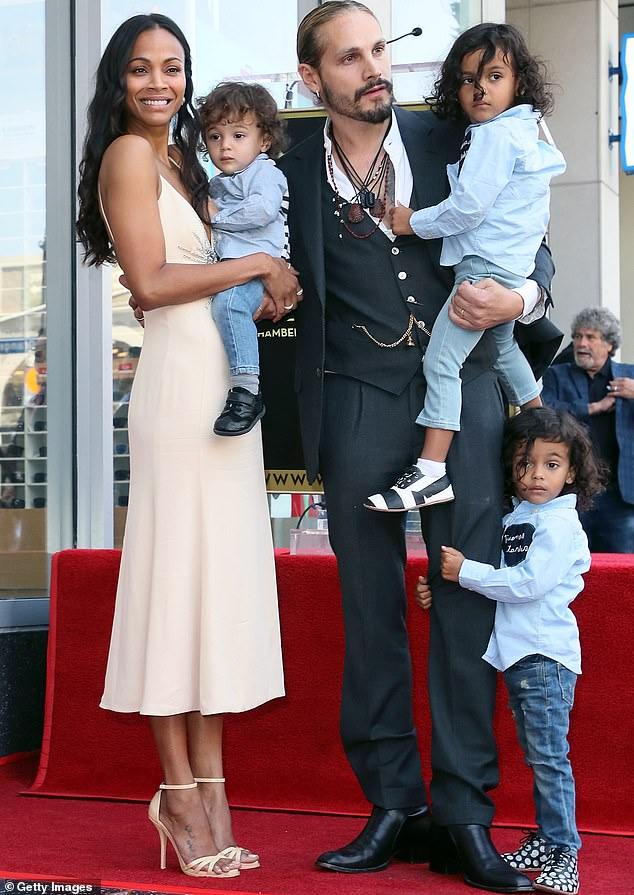 Defending herself in 2016, Saldana said: ‘I’m black the way I know how to be. You have no idea who I am. I am black. I’m raising black men.’ Saldana, Marco Perego and her children are pictured in May 2018

Then in a July 2016 interview with Allure said: ‘I’m black the way I know how to be. You have no idea who I am. I am black. I’m raising black men. Don’t you ever think you can look at me and address me with such disdain.’

She also said in the interview: ‘The script probably would still be lying around, going from office to office, agency to agency, and nobody would have done it. Female stories aren’t relevant enough, especially a black female story.

‘I made a choice. Do I continue passing on the script and hope that the “right” black person will do it, or do I say, “You know what? Whatever consequences this may bring about, my casting is nothing in comparison to the fact that this story must be told.”

‘The fact that we’re talking about her, that Nina Simone is trending? We f**king won. For so many years, nobody knew who the fuck she was. She is essential to our American history. As a woman first, and only then as everything else.’

‘It’s clear she brought her best to this project, but unfortunately she’s being attacked when she’s not responsible for any of the writing or the lies,’ Kelly said.