She grew up in front of the lens with millions of adoring teenage fans hanging on her every word, becoming one of the most famous faces on social media.

But YouTube star Zoe ‘Zoella’ Suggs is virtually unrecognisable as she showcases a new, edgy look in a glossy GLAMOUR shoot.

Speaking to the magazine the vlogger, who has an estimated £2.5million net worth, revealed she regularly attends therapy sessions and takes ‘digital detoxes’ as she lifted the lid on life in the public eye.

Zoella, who shot to fame with her YouTube channel nine years ago and now boasts some 17 million subscribers, says it is her fierce work ethic that’s enabled to achieve everything in her life – revealing she gets up at 6.30am every day and has a staggering 140 to-do lists on the go.

The 28-year-old now lives in a sprawling Brighton property with her boyfriend, fellow vlogger Alfie Deyes, having outgrown their former £1m five-bedroom home.

Superstar vlogger Zoe ‘Zoella’ Suggs is virtually unrecognisable as she showcases a new, edgier look in a glossy new GLAMOUR shoot which hist newsstands this week

But the starlet says her meteoric ascent to fame has not been without its pitfalls and she struggles to cope with the ‘negativity’ that comes with social media.

She revealed: ‘Over the years, I’ve grown a very thick skin, but I’d be lying if I said it wasn’t difficult.

‘There are definitely times where I’ve thought, “Wow, I don’t know if this is worth it”.

‘I’ve grown up a lot in the public eye. I’m a much stronger person. In situations where eight years ago I might’ve completely crumbled, I see things differently now.’

She also revealed she identifies as a feminist, saying: ‘Everyone wants women and men to be equal, and it’s important that women support and empower other women. Especially now – people are coming together to try to make a change, which is amazing.’

And the online star, who has spoken candidly about her anxiety in the past, also admitted she is prone to nervousness in situations that are ‘outside of her comfort zone’. 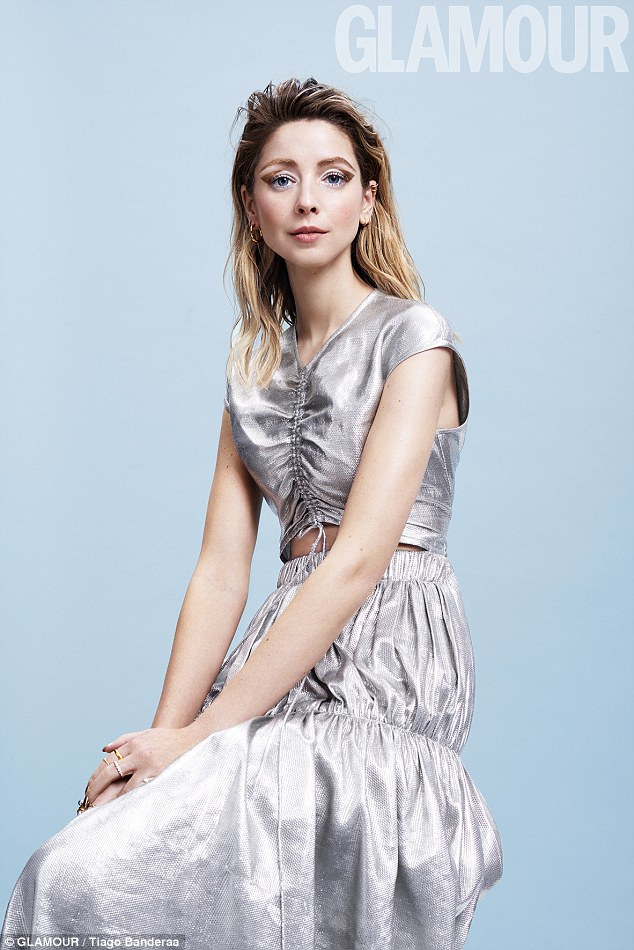 Speaking to the magazine, Zoella revealed: ‘I’ve grown up a lot in the public eye. I’m a much stronger person. In situations where eight years ago I might’ve completely crumbled, I see things differently now’

She now has weekly therapy sessions but admits it will take some time to ‘unravel’ the mental health issues she’s been battling since the age of 14.

Zoella, who makes a reported £50,000 a month, also refused to rule out live-streaming her marriage to Alfie if the pair ever tie the knot – but hinted that she would likely transform into a ‘mummy blogger’ when she becomes a parent.

The entrepreneur now runs a successful lifestyle empire including clothing, homeware and books – and even her own beauty brand stocked at Superdrug.

Zoella, whose first non-fiction book is set to be released in October 2018, also revealed what she believes is the reason behind her unprecedented success, saying: ‘These days people are into reality.

‘When you see normal people living their lives, there’s something really reassuring about that.

‘When you see an amazing mascara on a celebrity, you think, “I bet it’s really expensive and maybe she has a make-up artist, so would I be able to apply it like that?”