While many people were ringing in 2023 at a party, or in the comforts of their own home under their blankets, Zoey Deutch and best friend Nina Dobrev were soaking in some of the best Mother Nature has to offer in Antartica.

And on Thursday, the Everybody Wants Some!! star, 28, took to her Instagram page to share a slew of photos from their monumental trip that included her beau Jimmy Tatro, 30, as well as Dobrev’s, 34, partner Shaun White, 36.

The group, who toured the continent observing some of the wildlife, didn’t seem to fazed by the cold temperatures, which can fall to a brutal -70 degrees Fahrenheit during the winter.

During their adventure to the ice-covered continent, the two actresses took a helicopter ride, where they touched down on a heliport, amid all the ice chunks and glaciers in the water.

In one photo, Dobrev gave the thumbs up alongside Deutch who flashed a cool and confident look.

Both of them were bundled up in heavy jackets, layered clothing, and hats, as their long locks flowed down over their shoulders.

Deutch would throw in a shout out to her gal pal by writing, ‘Nina,’ along with a white heart emoji at the bottom of the photo. 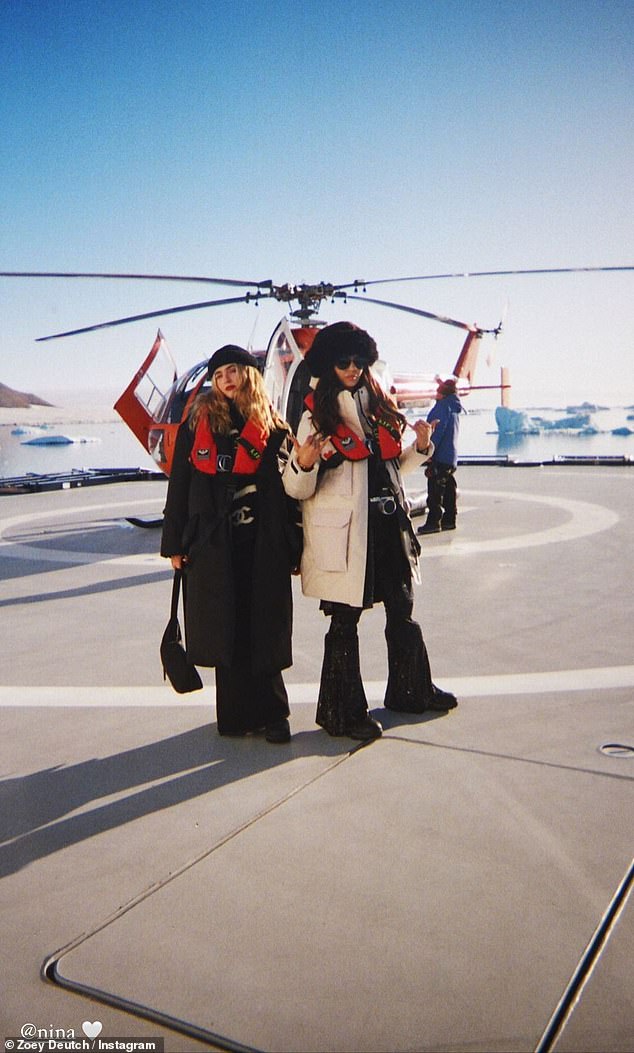 Touch down: During their adventure to the ice-covered continent, the two stars took a helicopter ride, where they touched down on a heliport, amid all the glaciers in the water 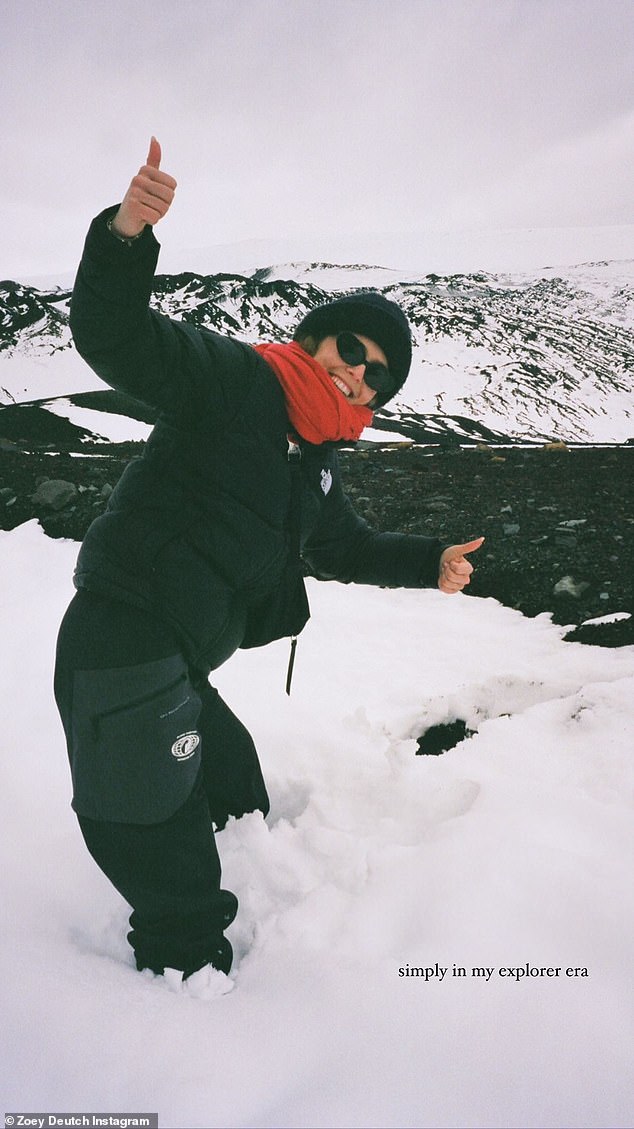 Winer wonderland: Deutch confessed she was ‘simply in my explorer era,’ in one photo showing her with snow up her knees and the snow-covered hills in the background

The Los Angeles Native proceeded to share a slew of images, which looked National Geographic worthy, that captioned many of the memorable moments they shared together.

One photo showed Deutch offering her own thumbs up while hiking along in knee-high snow, as she confessed to being ‘simply in my explorer era.’

There’s another three-shot image showing her hugging with the man in her life, Jimmy Tatro, while standing in front of the icy water and glaciers; flashing big beaming smile towards each other; and sharing a passionate kiss. 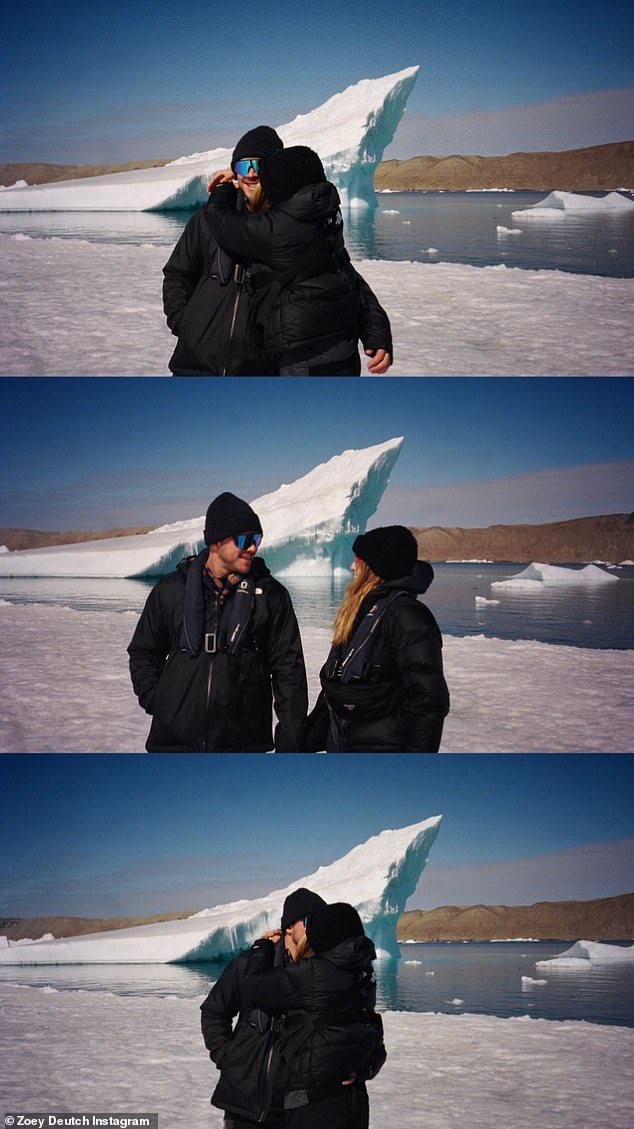 Emotional: Deutch and her beau Jimmy Tatro shared a hug and a kiss while posing in front of some beautiful ice chunks and glaciers 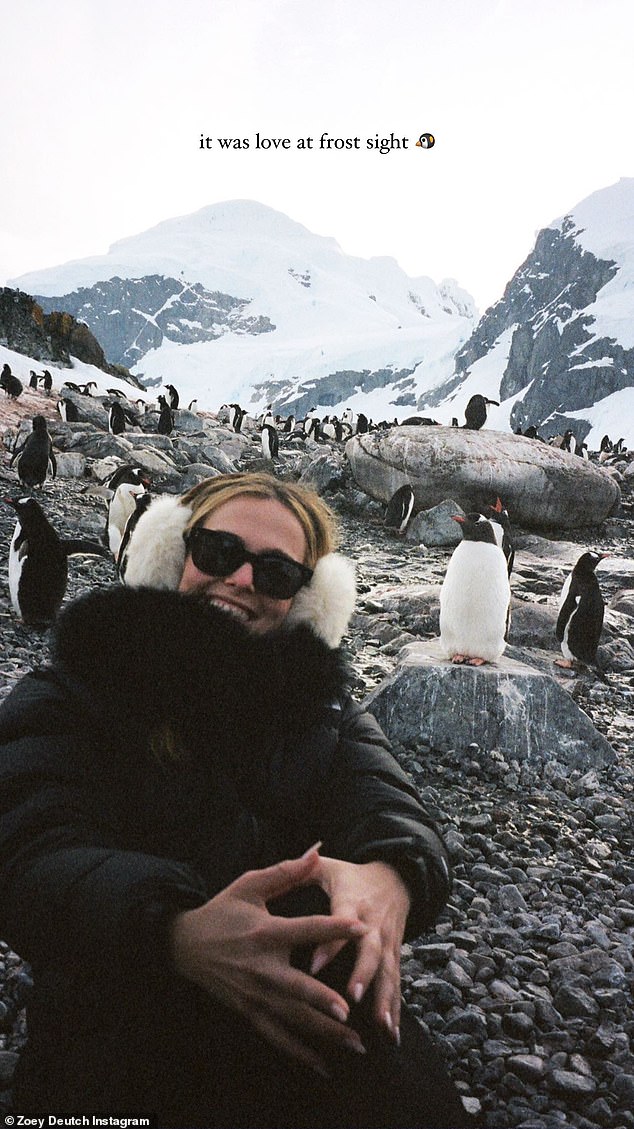 Making new friends: The Los Angeles native  confessed ‘it was love at frost sight’ when she posed in front of a slew of penguins along a rock area 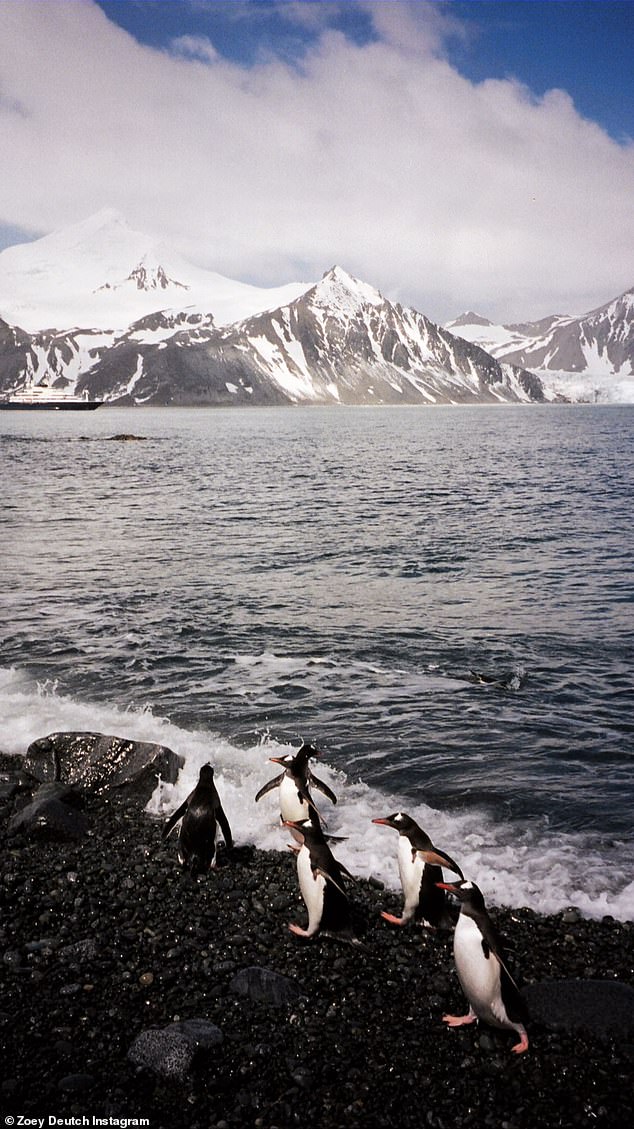 Amazing: The Everybody Wants Some!! posted a slew of photos of the wildlife in Antarctica, including these penguins playing along the shoreline 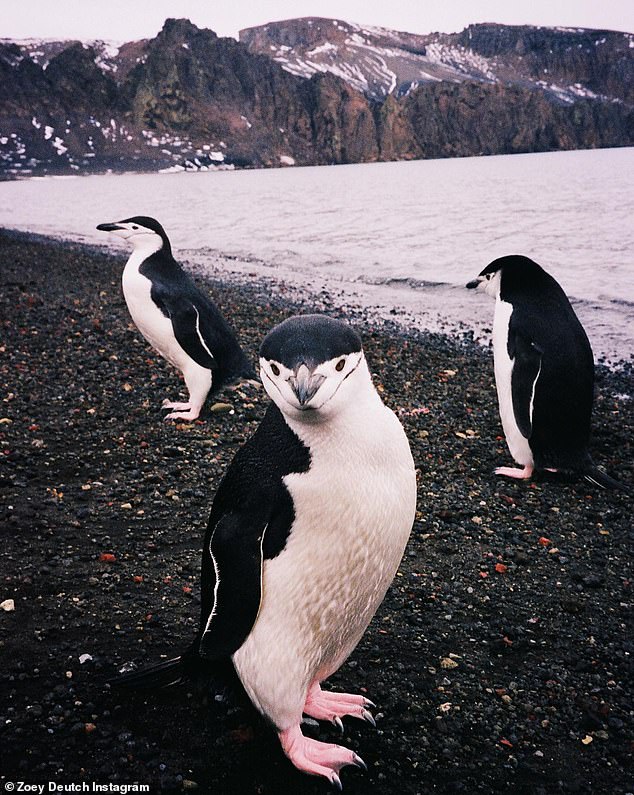 Curious animals: Some birds got up close and personal with Deutch

Worldwide, glaciers cover about 10% of the Earth’s land area; Antarctica accounts for about 85% of this total cover, according to Discovering Antarctica.

It turns out, Antarctica contains 90% of the world’s glacier ice, which is enough ice to raise world sea level by almost 60 metres if it were all to melt.

Deutch just couldn’t get enough of the wildlife, which included posing in front of a slew of penguins congregating on rocks.

‘It was love at frost sight,’  she joked, in a reference to the penguins that seemed to be interested in her presence, especially one in particular that was about 10 feet behind her. 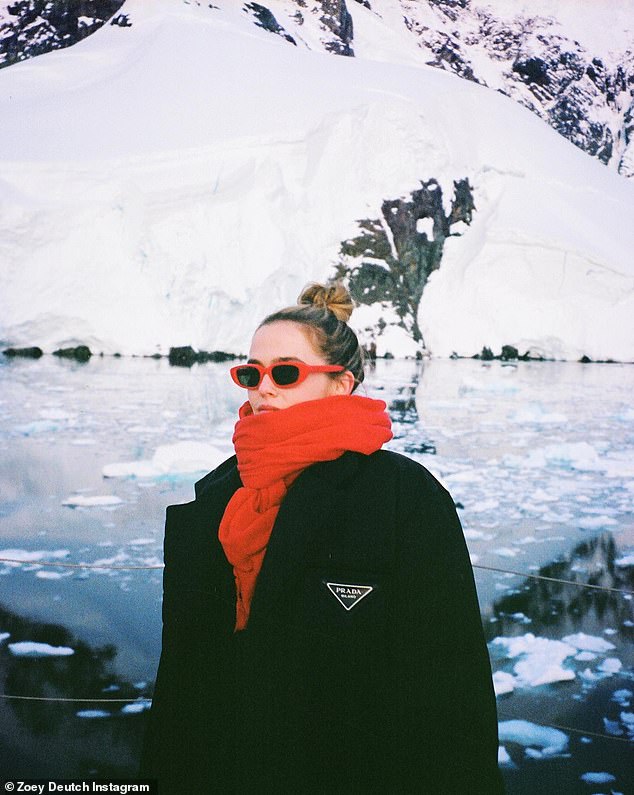 Keeping warm: The Los Angeles native bundled up while on the icy continent, which can get as cold as -70 degrees Fahrenheit in the winter 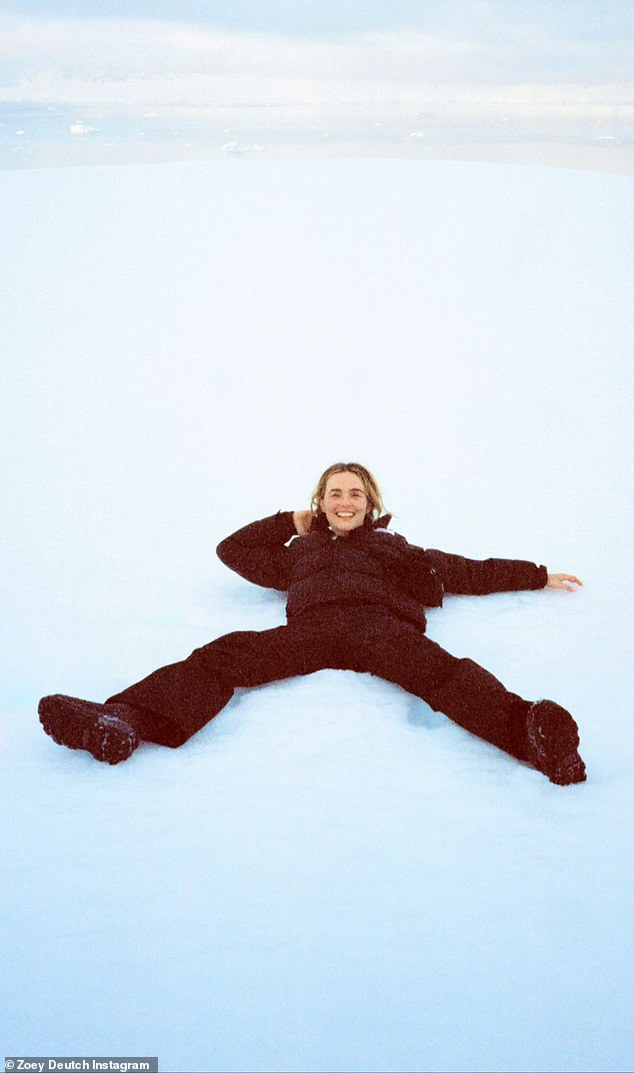 Snow bunny: Deutch made a few snow angels in the steep snow during the trip 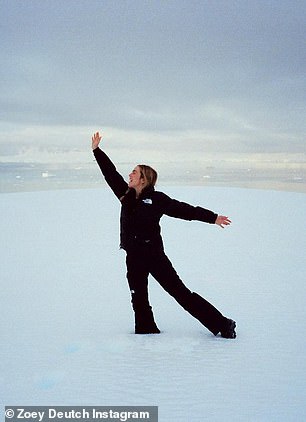 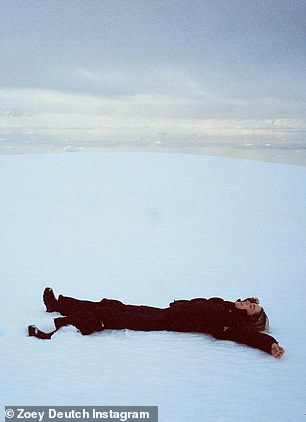 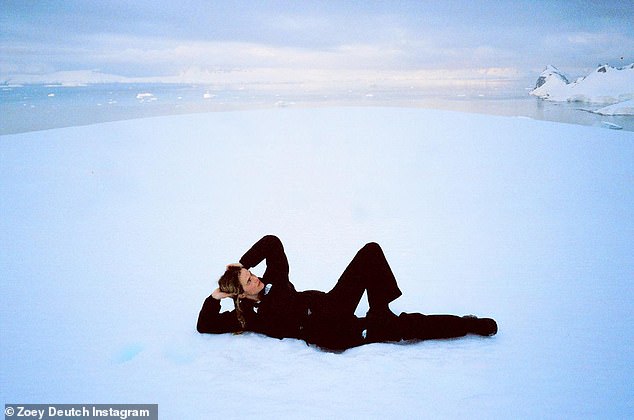 R&R: Deutch looked like she was ready for a cat nap while playing in the snow 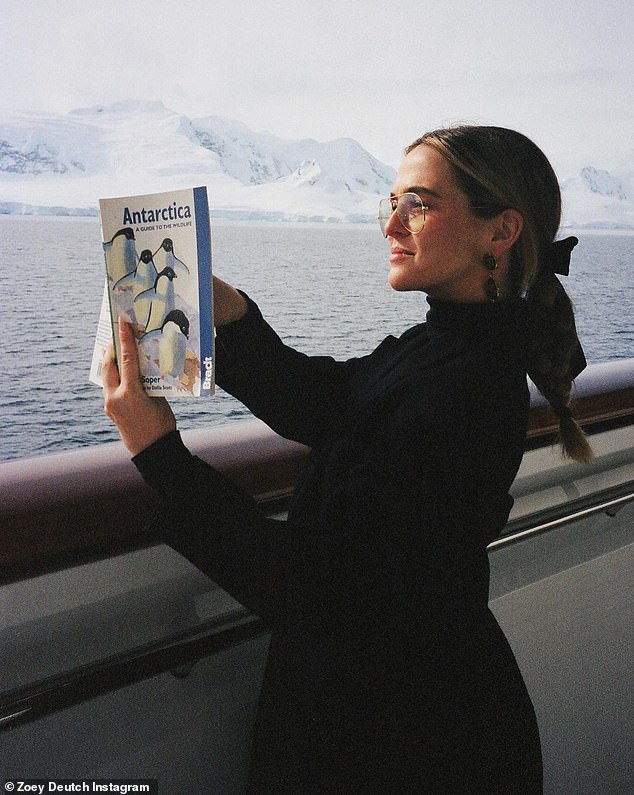 Soaking it in: The Politician star read up about Antarctica wile on a boat cruising along the chilly waters

Along with the penguins, there were also a series of images of seals and sea lions playing in the water and on the rocks at the shoreline.

While some of the animals were seen just as they were about to jump in the water, there were others seemingly on the hunt for food, and one or two taking a nap just off from the water.

There was no shortage of beautiful photos of the incredible ice shapes in the water and on land, in which the actress took advantage of by laying on the ground and posing for a series of snaps. 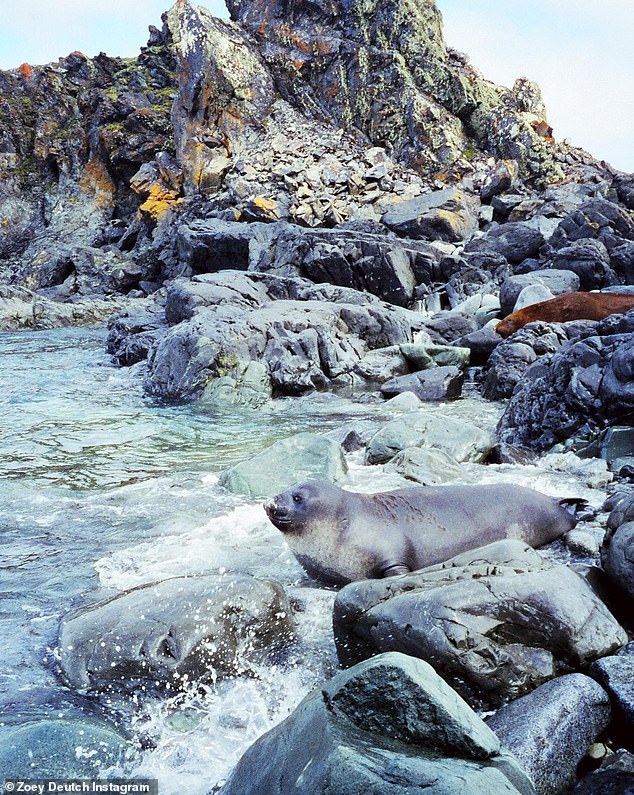 Water fun: There were groups of sea lions and seals who were enjoying the waters of Antarctica 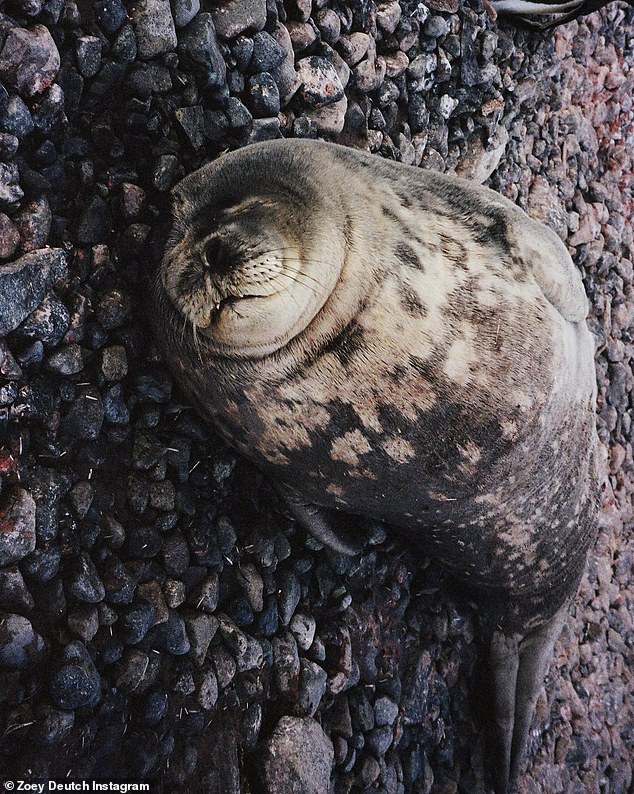 Nap time: The actress caught this guy taking a nap while laying on some rocks by the water 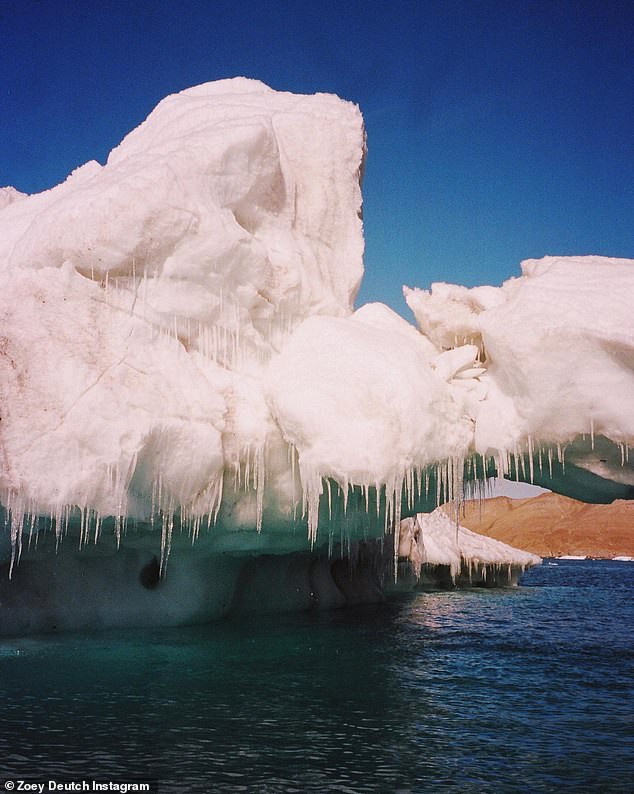 Quality imagery: There was a healthy dose of National geographic worthy photos 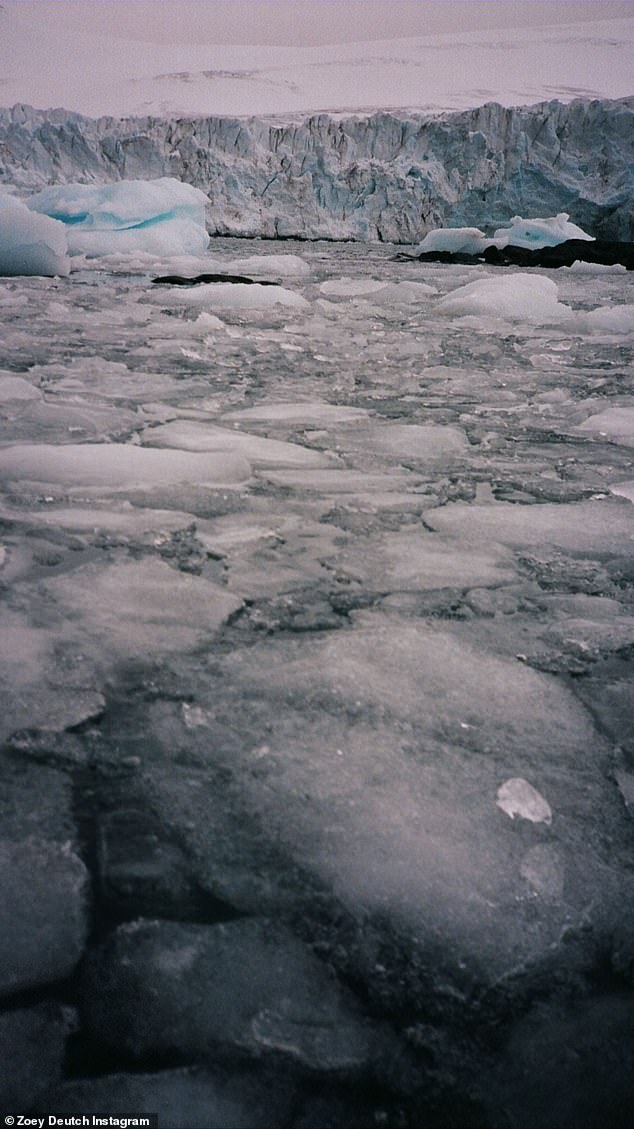 Worldwide, glaciers cover about 10% of the Earth’s land area; Antarctica accounts for about 85% of this total cover, according to Discovering Antarctica 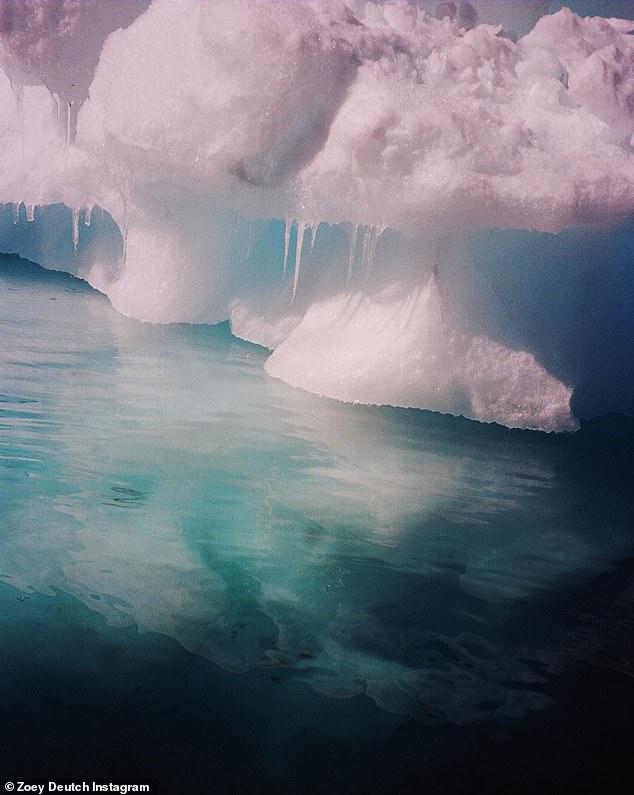 Sea of ice: Antarctica contains 90% of the world’s glacier ice, which is enough ice to raise world sea level by almost 60 metres if it were all to melt

The two ladies rang in 2023 together while on their trip, toasting each other with a couple of cocktails.

On New Year’s Day, the Canadian actress shared a series of three photos of herself striking a few poses while on a boat, cruising along the icy waters, dressed in a black form-fitting ensemble.

‘new year. new continent. Antarctica 2023,’ she wrote in the caption. 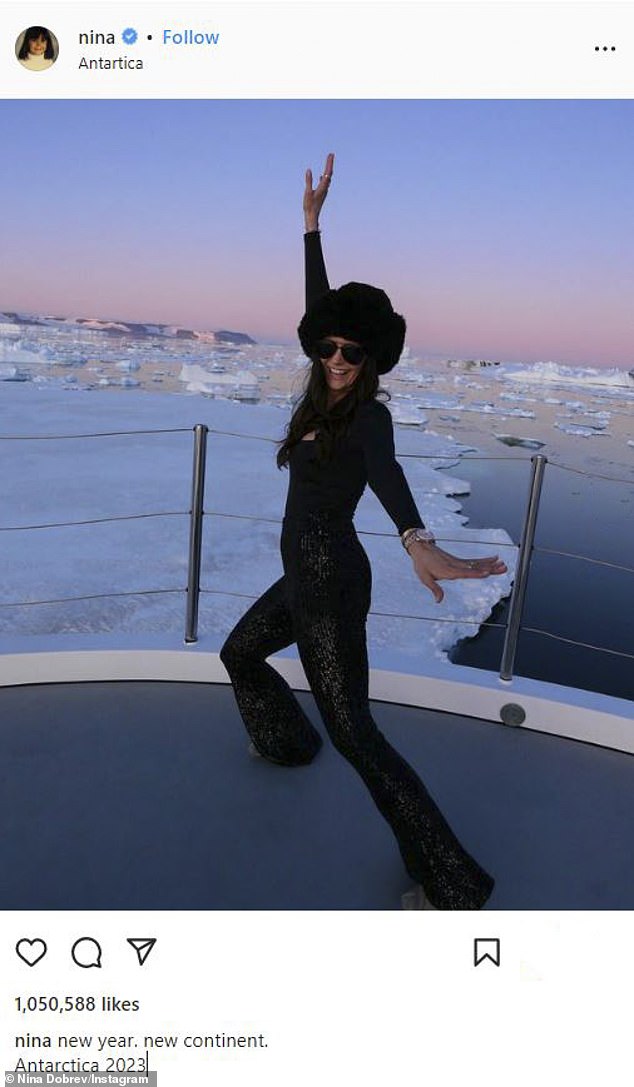 New Year’s Day: On New Year’s Day, the Canadian actress shared a series of photos of herself striking a few poses while on a boat, cruising along the icy waters 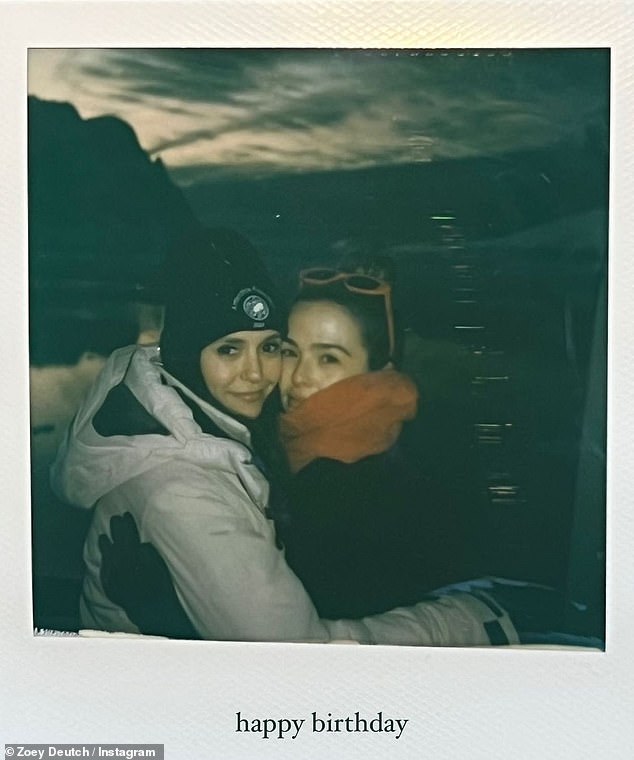 Birthday wishes: Deutch wished her friend a ‘happy birthday’ when she turned 34 on January 9 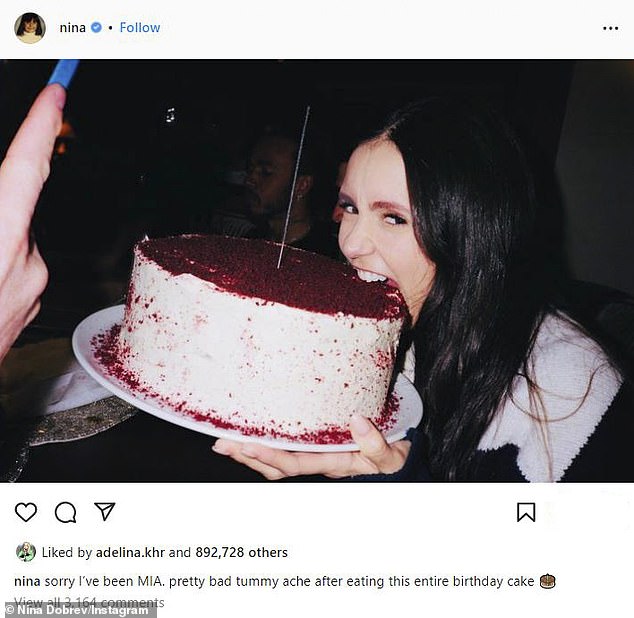 Tasty: Dobrev showed off her comedic touch by posting a photo of herself taking a big bite out of her birthday cake on to Instagram

Deutch ended up sharing one image of the two ladies snuggled up together during their trip to Antarctica when she wished Dobrev a ‘Happy Birthday’ when she turned 34 on Monday, January 9.

A few days after her special day had passed Dobrev took to her Instagram and posted a photo of herself taking a big bite out of her birthday cake.

‘Sorry I’ve been MIA. pretty bad tummy ache after eating this entire birthday cake,’ she shared in the post that came three days after her actual birthday 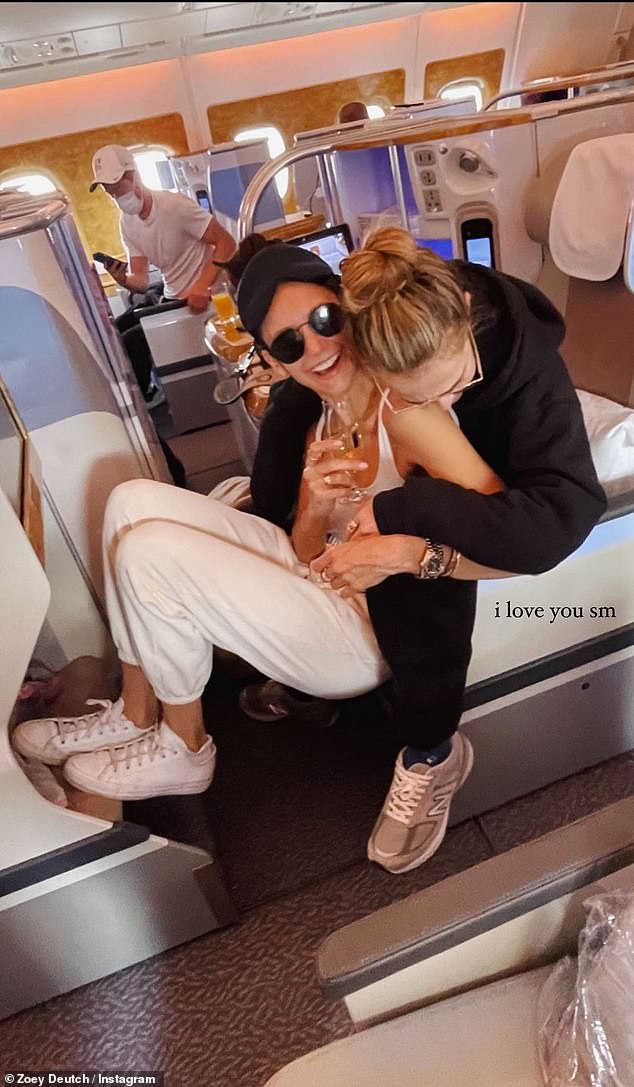 Adorable: Deutch confessed to her bestie ‘I love you sm (so much),’ along with a photo of the two ladies sharing a hug together