The new ‘miracle’ cleaning buy Aussie mums are obsessed with that leaves your home smelling ‘heavenly’: ‘I’ve been waiting for four years to buy this’

Australians are flocking to Woolworths to score a new ‘miracle’ cleaning buy from England before it sells out.

The Zoflora Multipurpose Disinfectant ($10) is a concentrated household grade disinfectant that comes in several scents including Linen Fresh and Midnight Blooms and is known for making homes smell ‘heavenly’.

‘I’ve been waiting for this for four years,’ said a mum on TikTok. ‘I think my heart did a little flip when I saw it on the shelves.’

‘Zoflora does not disappoint,’ she went on. ‘This linen fresh smell … my house smells like Crown Casino and Country Road had a baby. I’m so obsessed!’

The product is originally from the United Kingdom, and has been stocked all over the UK since 1922.

Woolworths is presently slowly rolling the product out all over Australia and in select New Zealand stores.

Hundreds commented on the mum’s TikTok, bewitched by her endearingly odd description of the product.

‘I’ve never seen or heard of this product,’ said one woman. ‘But the way you described the scent is amazing and I will be buying this immediately.’

‘Neither have I!’ replied another. ‘The thought of Crown Casino and Country Road having a baby is enough to make me buy it.’ 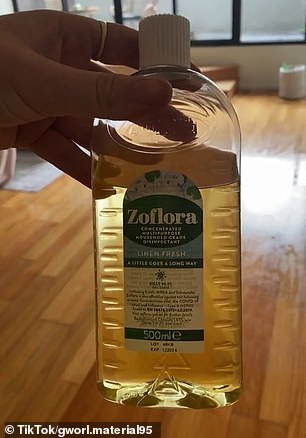 Zoflora’s three-in-one target system ensures Zoflora kills bacteria (including COVID-19 particles), eliminates odours, and has a lasting fragrance for up to twenty-four hours

Zoflora’s three-in-one target system ensures it kills bacteria (including COVID-19 particles), eliminates odours, and has a lasting fragrance for up to twenty-four hours.

Hence, many were enchanted by the product’s scent.

‘My house smells absolutely unreal after using this,’ wrote one woman. ‘I definitely don’t regret buying it.’

‘I love Midnight Blooms … nice smell of a garden in my apartment.’

Some warned of a potentially dangerous outcome of mixing in bleach.

‘Please don’t mix it with bleach,’ wrote one woman. ‘It becomes a deadly toxic chemical!’

‘Yes!’ Agreed another. ‘Never mix any chemicals together. I mix my Zoflora with hot water only – as recommended on the bottle.’