Alarming ‘zombie fires’ have been captured burning near the world’s coldest village despite temperatures being far below freezing.

Oymyakon, a village in Siberia in northeastern Russia, is believed to be the coldest human settlement on Earth and today registered a temperature of minus 76 F (minus 60 C) – just 7.7 C higher than the coldest temperature ever recorded in a permanently inhabited settlement.

But despite the unbelievably bitter temperatures, wildfires that were sparked this summer continue to burn even underneath deep snow, in a phenomenon known as ‘overwintering fire’ or ‘zombie fire’.

Non-stop plumes of smoke are seen billowing from underneath deep snow drifts, just two miles from Oymyakon and a neighbouring village, Khara Tumul.

Despite the fires being extinguished on the surface, the flames can continue to smoulder under the snow thanks to an abundance of peat and methane gas, meaning that when the snow melts in spring, the fire could immediately spread again. 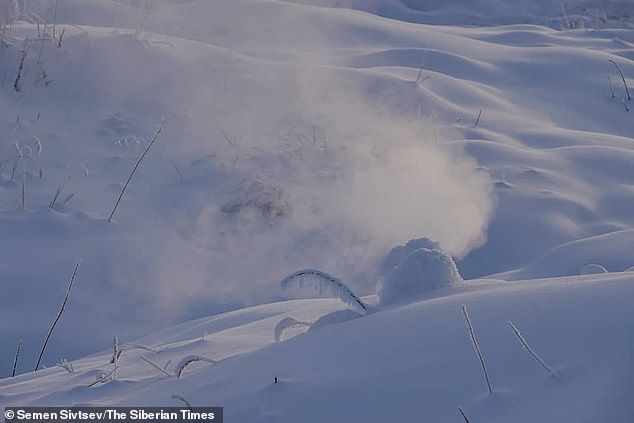 A ‘zombie fire’ is seen burning underneath a deep snow drift outside the world’s coldest village, Oymyakon, in Siberia, Russia. The fires are burning underground despite temperatures being at -60C 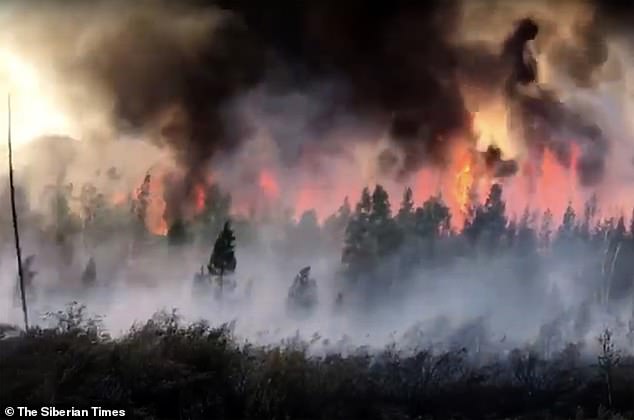 Siberia saw devastating wildfires in what was an uncharacteristically dry summer earlier this year, but in some places the fires have continued to burn through winter 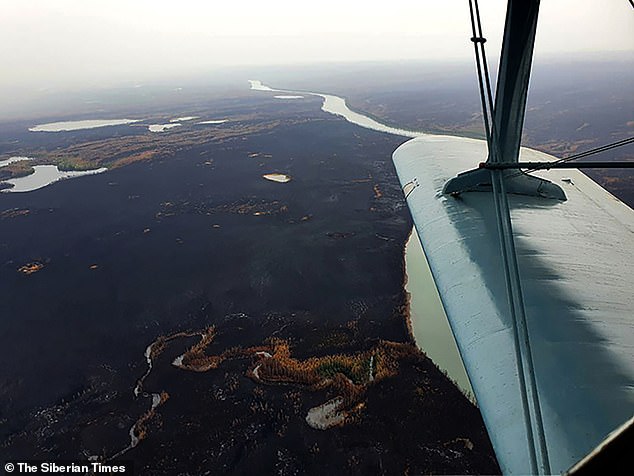 AN image taken from a plane shows the result of the devastating wildfires that swept across Yakutia, Siberia, Russia this summer. Huge swathes of rich grassland were completely destroyed, while some fires continue to smoulder underground even during winter

Zombie fires are a rare phenomenon that occur in countries with extremely cold climates like northern Canada, Alaska and Russia, and experts believe they are likely to occur more and more often as a result of climate change and wildfires.

As temperatures continue to climb, patches of the permafrost – layers of soil that remain below freezing all year round – begin to melt and release gas that has been trapped in the ice.

These patches of ground can be set alight by wildfires that occur in the spring and summer, but as temperatures fall during winter and snow beings to cover the ground, the abundance of gas that has been released can allow fires to continue burning under the surface. 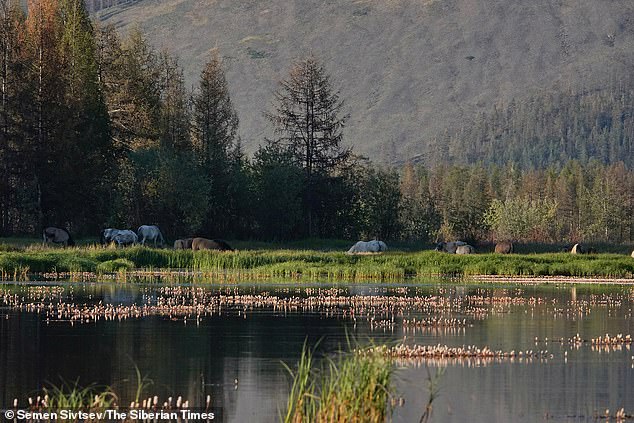 ‘[The fire] was filmed not far from Oymyakon, closer to the village of Khara Tumul,’ said local resident and photographer Semyon Sivtsev.

‘It was near (summer) grasslands – there were wildfires there in the summer.’

The winter-long fires are typically extinguished by the snow melting in spring, but this is not always the case and some zombie fires can continue to burn permanently.

‘Such zombie fires are not so rare,’ Sivtsev said.

‘I know even a case when such zombie peat fires were burning for several years in the area of Mundullakh, not far from Oymyakon.’

Sivtsev said the fire was eventually extinguished by a combination of snowmelt and heavy rains, and ultimately formed a lake.

‘A lake formed in this place four years ago as the peat burns down and is replaced by water.

‘This was also aided by the permafrost thawing and in several recent years we have had heavy rains in summer.

‘Only last summer was relatively dry.’ 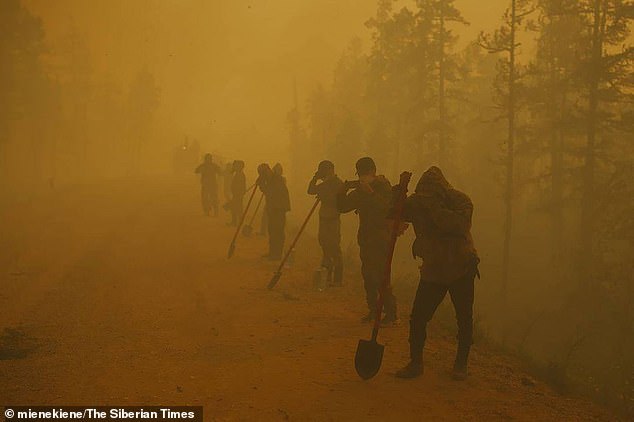 Workers shield their face from the smoke as they attempt to battle horrendous wildfires in Yakutia, Siberia, Russia this past summer 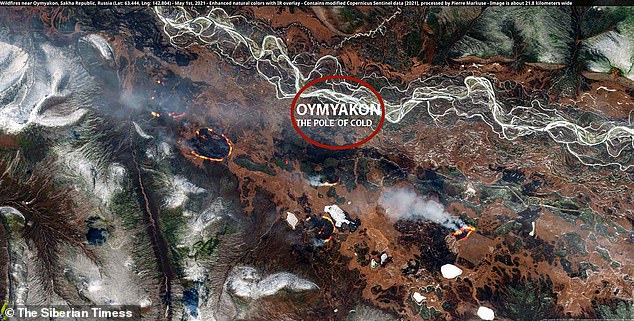 Satellite images taken of areas close to Oymyakon show fires raging as early as April this year, with snow still on the ground

An uncharacteristically dry period in Siberia this year led to raging wildfires which have burned throughout the year.

Satellite images taken of areas close to Oymyakon show fires raging as early as April this year, with snow still on the ground.

The latest footage of the zombie fire in Oymyakon comes after scientists from the EU’s Copernicus Atmosphere Monitoring Service revealed that this year’s wildfires collectively omitted more than double Germany’s annual CO2 emissions.

Wildfires emitted 1.76 billion tonnes of carbon globally in 2021, Copernicus said, with Siberia’s summer blazes among some of the world’s most ferocious this year.

Cows in the world’s coldest village wear fur or wool-lined bras when thermometers plunge in the Siberian winter.