The amount first-time buyers need to earn to get onto the first rung of the housing ladder in major town and cities has been revealed in new research.

An average first-time buyer needs a household income of £54,400 to secure a mortgage on their first property – but the picture varies dramatically across the country, the figures from Zoopla show.

This is nearly double the average annual wage in Britain, suggesting that many simply have to club together with a partner or relative to buy their first home.

The research also found that buying a first home is rapidly getting more expensive.

The national average salary needed to get on the housing ladder rose 9 per cent to £54,400

Potential first-time buyers typically need to earn at least nine per cent more to secure their first property than they did just three years ago.

As with all things property related the picture varies dramatically depending on which part of the country you’re in.

Liverpool registered the highest house price growth of all of the areas analysed despite being the most affordable market for first-time buyers to enter.

Leicester saw a massive 20 per cent increase in the level of income needed to buy a first home over the past three years, now standing at £38,000.

How does Zoopla work out the average income needed to buy a house?

To compile the list, the property website found the average loan-to-value and mortgage rate for first-time buyers in 20 towns and cities from banking trade body UK Finance to calculate annual mortgage repayments on a 30 year term.

It assumed that 30 per cent of net household income is spent on mortgage costs and the mortgage amount is capped at four times income, as is standard for most lenders.

It also assumed that buyers would put in a 15 per cent deposit in regional cities and 25 per cent in London, Oxford and Cambridge.

The larger deposits for high value cities allow for the impact of lenders’ loan to income limits.

It isn’t all bad news for first-time buyers, particularly those in the South East where house prices are highest.

The average household income needed to purchase in the three most expensive cities has fallen by an average five per cent since 2016.

This follows years of weak growth and small price falls in the capital, where prices are just now beginning to stabilise.

Cambridge and Oxford require the highest incomes of anywhere outside of London, however the income needed to purchase has also fallen in the university cities by five per cent and three per cent respectively.

Aberdeen registered a drop in the level of income required to buy of 12 per cent, the largest percentage decrease all the UK cities, as a result of sharp price decreases in the city since 2015.

Average deposit levels have also increased, and again the picture varies across the country.

Zoopla’s Richard Donnell said: ‘First-time buyers are an important group accounting for more than one in three sales.

‘Affordability remains attractive in many regional cities where house prices have not registered the gains seen in south eastern England.

‘We expect prices to continue to increase in cities where housing is in reach of those on average incomes.’

On a national level house price growth is slowing

The most recently available figures from the Office for National Statistics and HM Land Registry show that in April the average cost of a home stood at £229,000, which is £3,000 higher than at the same point a year ago.

Although house prices continue to grow, the rate at which they do is slowing on a national level.

The Office for National Statistics said: ‘Over the past three years, there has been a general slowdown in UK house price growth, driven mainly by a slowdown in the south and east of England.’ 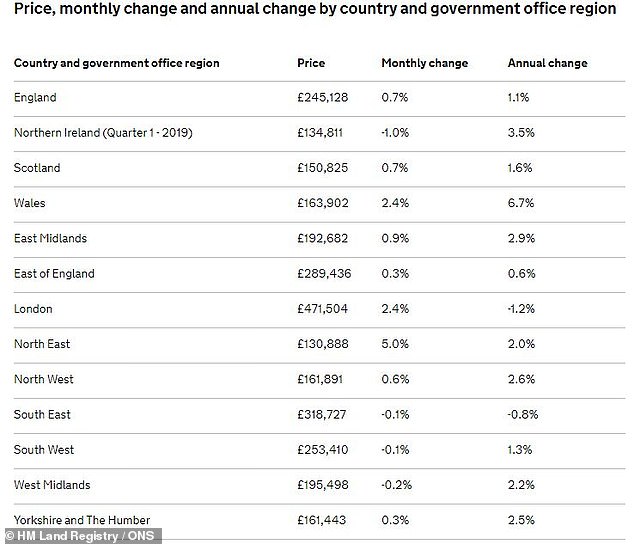 Regional property price shifts, according to figures from HM Land Registry and the ONS

London’s property market continues to struggle, with prices down by 1.2 per cent year-on-year in April.

This does mark an improvement on March, however, when prices fell 2.5 per cent compared with March 2018.

The North East continued to have the lowest average house price at £131,000, which means the average cost of a home in this region remains below 2007 levels.

The ONS report found that in the first-time buyer market, the average cost of a first home has risen by 0.7 per cent in the last month to £192,559.