She was the original Hollywood It Girl, famous for her nine marriages, self-parodying glamour and witty quips.

Now, almost four years after her death, Zsa Zsa Gabor is going on a final ‘farewell tour’ – as her flamboyant widower plans to take her ashes on a trip around Europe before finally laying her to rest in her native Hungary.

‘Zsa Zsa is in a beautiful gold urn which hasn’t left my side since her funeral in January 2017,’ Prince Frederic von Anhalt told The Mail on Sunday last night.

‘I sleep with it and she goes everywhere with me. If I had my way I would stay with her until my end but I’ve just turned 77 and none of us knows what will happen with this pandemic so I decided it’s time to take her home to Hungary – but not without first taking her on a tour of her favourite places.’

Von Anhalt said he intended to carry his wife’s gold urn around Europe in a Louis Vuitton designer dog carrier that she bought for her favourite pet.

‘She would carry her shih tzu Macho around it in. She loved that dog so I think it’s appropriate.

‘We’ll go on one final tour of London, Paris, Vienna and Geneva and then head to Budapest.’

Zsa Zsa died of a heart attack in December 2016 just two months shy of her 100th birthday. She is widely credited with inventing modern celebrity and being the first of the ‘famous-for-being-famous’ stars.

The actress, whose husbands included hotel heir Conrad Hilton, actor George Sanders and investment banker Herbert Hunter, poked fun at her notorious love life with quips including: ‘I am a marvellous housekeeper. Every time I leave a man, I keep his house.’

But even in death she is embroiled in controversy, with her former publicist Ed Lozzi criticising her widower’s plans. 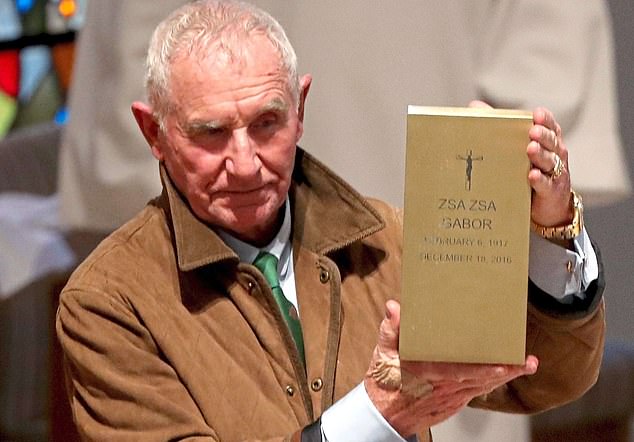 Her widower is pictured above with her ashes. Zsa Zsa’s ashes will be buried in Budapest’s national cemetery. There will be a granite headstone with her photograph on it – but no age

He claimed that Zsa Zsa should be laid to rest alongside her daughter Francesca and sister Eva in Hollywood’s Westwood Cemetery.

‘That’s what she would have wanted,’ he said. ‘Instead, she’s being driven around in the glove box of a Rolls-Royce, going wherever her phony Prince husband wants to take her.’

Von Anhalt, who admits to buying his royal title from an impoverished German aristocrat, hit back: ‘I was devoted to that woman through 30 years of marriage.

‘She loved to travel. She loved Europe. Every year we would go to her favourite places.

‘Her daughter and sister are buried in LA, and the other sister and mother are in Palm Springs. Zsa Zsa never liked sharing the billing. Her final wish was to go home to Hungary where she was always treated as a star.’

Von Anhalt had reportedly even asked Hungarian Prime Minister Viktor Orban for a state funeral for his late wife.

Zsa Zsa was born in Budapest in 1917 with the real first name Sari. She arrived in Hollywood with her mother, Jolie, and sisters, Eva and Magda, in 1941 to escape war in Europe.

She made more than 40 films, including Queen Of Outer Space, Won Ton Ton, the Dog Who Saved Hollywood, and Naked Gun 2½, but it was her wild private life that made her famous.

She was a regular on the talk show circuit, and in 1989, her notoriety grew when she was jailed for three days for slapping a Beverly Hills police officer who pulled over her car.

Her widower said she milked the incident for publicity. 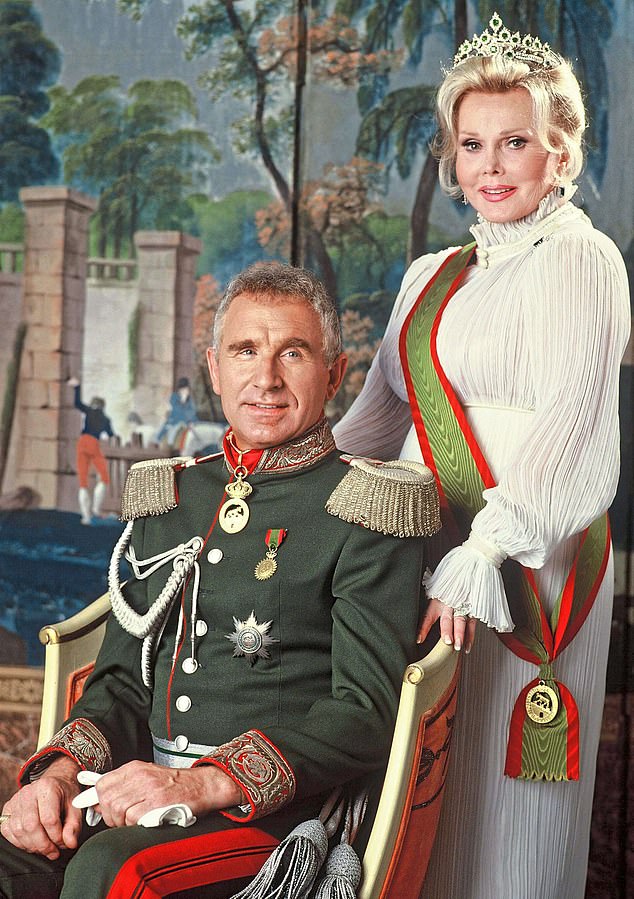 Extravagant: The star is pictured with Frederic von Anhalt in 1990. Von Anhalt had reportedly even asked Hungarian Prime Minister Viktor Orban for a state funeral for his late wife

‘The case should have lasted three days and her first lawyer wanted to settle but Zsa Zsa knew the power of scandal,’ he said.

‘That case went on for 14 days and made headlines around the world. She made millions from advertising and other work after that.

‘Anything people like the Kardashians do today, they learned from Zsa Zsa.’

Zsa Zsa’s ashes will be buried in Budapest’s national cemetery. There will be a granite headstone with her photograph on it – but no age.

‘After age 60 she demanded we stopped counting,’ Von Anhalt explained.

‘I’m going to put “20th Century icon” on there along with a picture of her star on the Hollywood Walk of Fame. It is what she would have wanted.’

I’m a marvellous housekeeper. Every time I leave a man, I keep his house.

My next marriage will be a small affair. Only the immediate press will be invited.

I never hated a man enough to give him his diamonds back. 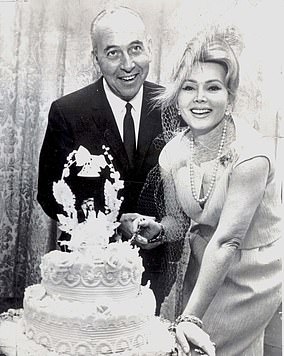 How many husbands have I had? You mean apart from my own?

A girl must marry for love – and keep on marrying until she finds it.

A man is incomplete until he has married. Then he’s finished.

I want a man who’s kind and understanding. Is that too much to ask of a millionaire?

I know nothing about sex, because I was always married.

My husband said it was him or the cat. I miss him sometimes.

Remember – the only place men want depth in their women is in her decolletage.

There’s nothing wrong with a woman encouraging a man’s advances – as long as they are in cash.

It’s never as easy to keep your own spouse happy as it is to make someone else’s spouse happy.