The Arizona Daily Star reported that Fisher Sand and Gravel had been chosen to build 42 miles of painted black fencing through southern Arizona.

The company’s CEO Tommy Fisher had made a direct pitch to Trump through various channels, including praising the administration on cable news, and cultivating relationships with people in the president’s orbit, including former White House adviser Steve Bannon and GOP Senate candidate Kris Kobach, according to The Washington Post. 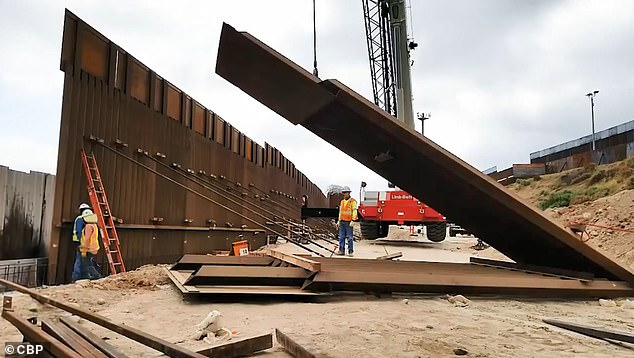 The portion of the border wall that Fisher Sun and Gravel will build will be along the Arizona-Mexico border that will be difficult to construct due to ‘remoteness, rugged terrain and logistical challenges’ 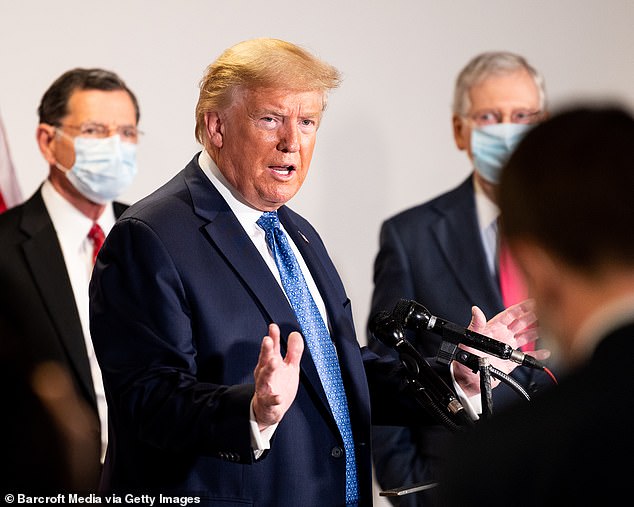 President Trump has continued to think about his border wall amid the coronavirus pandemic, adding to the price tag because he wants it painted black, to make it hotter and harder to climb

Fisher Sand and Gravel had previously been turned down for the work, but then won a $400 million border contract, which is under review by the Department of Defense’s inspector general.

The Washington Post confirmed Tuesday that the audit is ongoing.

Democratic lawmakers had raised concerns that the White House had improperly influenced the procurement process.

The new contract was not officially announced by the DOD nor Customs and Border Protection, further infuriating Congressional Democrats.

‘It speaks volumes to the administration’s lack of transparency that they didn’t announce this award – the largest ever – and we continue to learn about contracts to companies without a proven track record from the media,’ House Homeland Security Chairman Bennie Thompson said in a statement to The Post.

‘Given the coronavirus pandemic and the ongoing investigation into Fisher, the administration should pause construction and contracting decisions until the investigation has concluded favorably and it is safe to resume nonessential construction projects,’ Thompson added.

But Trump has continued to talk about the wall amid the coronavirus pandemic.

And in White House meetings, according to The Post’s reporting, he’s brought up Fisher, as he’s added $500 million to the wall’s pricetag in order to paint it black.

According to The Post’s estimates the paint job adds $1.2 million a mile to the overall price.

Trump has argued the darker color will be hot to the touch in the sun, making the wall harder to climb.

Last year, Fisher sued the Army Corps of Engineers in order to be added to the eligible firms to bid on wall contracts.

The Post reported that Sen. Kevin Cramer, who represents Fisher’s home state of North Dakota, spoke to the president about Fisher and held up a White House budget nominee as a way to get the Army Corps of Engineers to disclose information about the bidding process.

Fisher was eventually added to the list, and while the project has a $30 million a mile tab, one official told The Post that it was the cheapest bid the government received for that section of the U.S.-Mexico border.

One CBP official told The Post that the Arizona section will be ‘a challenge’ due to its ‘remoteness, rugged terrain and logistical challenges,’ including a section of the Santa Cruz River basin, where summer monsoon-like storms cause vicious flash flooding.