$1.8M stolen in minutes after couriers leave keys in van

A thief managed to drive off with almost $2 million after some clumsy cash couriers ended up leaving the keys to their van inside the vehicle while it was parked outside the bank.

Two ATM deliverymen were making a cash drop at the Citizens Trust Bank in Decatur, Georgia earlier this month.

The driver locked the doors to the vehicle but foolishly left the keys in the ignition and the engine still running.

Almost two million dollars in cash was stolen after couriers left the keys to their delivery truck and the engine running as they went inside this bank in Decatur, Georgia 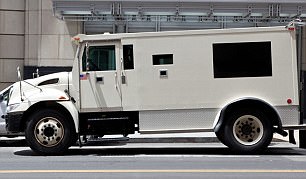 The couriers were inside the bank for between 10 and 15 minutes but by the time they went back outside, the cash and the van had vanished.

Two weeks on, federal and local officials are still looking for the thief

The theft took place early in the morning at about 6:45am while the two employees from ATM Response Inc. drove into the bank parking lot and went inside with an unspecified amount of money.

When they returned, all that was left was broken glass from where the thief managed to get inside.

CCTV footage shows a man in dark pants and a gray long-sleeve shirt and backpack walk up to the van and try to open the doors.

The vehicle was found later that same day in Decatur by the DeKalb County Police.

There suspect was of course long gone. and so far cops have not been able to track him down.