‘A natural epidural’: One in 100 women have a gene that raises their pain threshold and allows them to give birth without any anaesthetic, study shows

Around one in 100 women carry a gene that raises their pain threshold and allows them to give birth without any anaesthetic, a study has revealed.

The rare gene variant, called KCNG4, is believed to inhibit how pain is processed by the nervous system and acts as a ‘natural epidural’.

Researchers from the University of Cambridge found that it was present in women who had carried their first-born child to full term and did not request any pain relief during an uncomplicated vaginal delivery.

It remains unknown whether some men also have the pain-resistant genetic variant, as the study only looked at women during the severe stress from childbirth.

Around one per cent of women have much higher pain threshold than others due to the rare variety of a gene called KCNG4. University of Cambridge researchers studied women in labour to find the variant (stock)

Dr Ewan St. John Smith, senior co-author of the study from the university of Cambridge, explained: ‘The genetic variant that we found in women who feel less pain during childbirth leads to a “defect” in the formation of the switch on the nerve cells. In fact, this defect acts like a natural epidural.

‘It means it takes a much greater signal – in other words, stronger contractions during labour – to switch it on.

‘This makes it less likely that pain signals can reach the brain.’

A group of women at Addenbrooke’s Hospital, part of Cambridge University Hospitals NHS Foundation Trust were studied who did not request any pain relief during childbirth.

This level of pain tolerance, researchers state, is not the norm.

‘It is unusual for women to not request gas and air, or epidural for pain relief during labour, particularly when delivering for the first time,’ said Dr Michael Lee, joint first author.

Academics took these women and did various tests to gauge pain threshold, which included heat and pressure as well as having their hands plunged into icy water.

A group of women who did require pain relief during a similar birth also underwent these same tests.

Unsurprisingly, the researchers say the group who did not opt for pain relief in labour had a much higher pain threshold.

After finding a clear difference in how individuals coped with significant pain, the academics sought out an explanation. 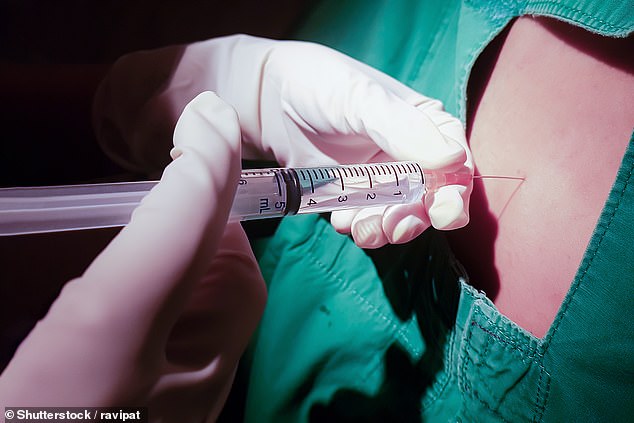 Dr St. John Smith, senior co-author, explained: ‘The genetic variant that we found in women who feel less pain during childbirth leads to a “defect” in the formation of the switch on the nerve cells. In fact, this defect acts like a natural epidural’

What is an epidural?

An epidural is an injection in your back to stop you feeling pain in part of your body.

Epidurals can be used:

Steroid medicine can also be given with an epidural injection, to treat pain in your back or leg that’s caused by sciatica or a slipped (prolapsed) disc.

They are regularly used during labour to reduce pain when giving birth naturally.

Genetic analysis of the women revealed a higher than normal prevalence of a gene variant called KCNG4.

This chunk of genetic material is integral in controlling how the human body propagates pain from one nerve to the other.

If women have a rare version of this gene, the protein that sends electrical signals through the body is numbed, resulting in a lessened experience of pain.

Dr Van Lu discovered the trend in the human women and a colleague from the Department of Pharmacology at Cambridge University, by Dr Ewan St. John Smith, tested it on mice.

His research confirmed the initial findings and discovered that the specific KCNG4 variant takes longer to activate a pain signal, raising the tolerance threshold.

Senior co-author Professor Frank Reimann says the team is hopeful the discovery of the specific variant could lead to new pain-management drugs.

‘This approach of studying individuals who show unexpected extremes of pain experience also may find wider application in other contexts, helping us understand how we experience pain and develop new drugs to treat it,’ said Professor David Menon, senior co-author.

The research was published in journal Cell Reports.