Combined harvesters: 10,000 farmers descend upon Berlin in their tractors to protest against country’s new restrictions on fertilizer and pesticides

Thousands of farmers descended on Berlin from the countryside with their tractors today, gathering at the capital’s landmark Brandenburg Gate and blocking traffic in protest against the German government’s agricultural policies.

About 10,000 farmers with 5,000 tractors drove into the city, with the first 1,800 heavy vehicles arriving from the surrounding state of Brandenburg before dawn.

The farmers claim new environmental limits being planned are overly restrictive and that the government is making it impossible for domestic agriculture to compete against imports, among other things. 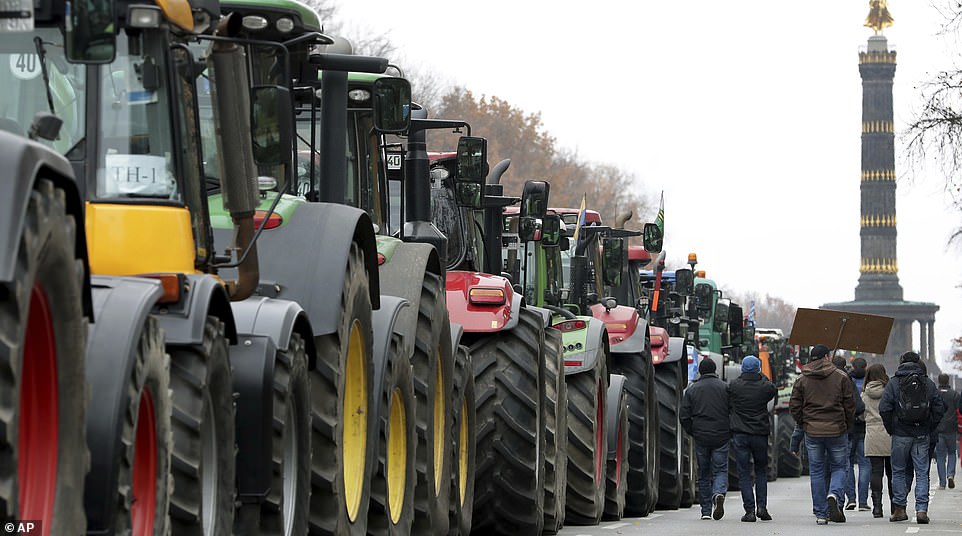 An estimated 10,000 farmers with 5,000 tractors parked their vehicles on the road between the Berlin university and the landmark Brandenburg Gate today (pictured) 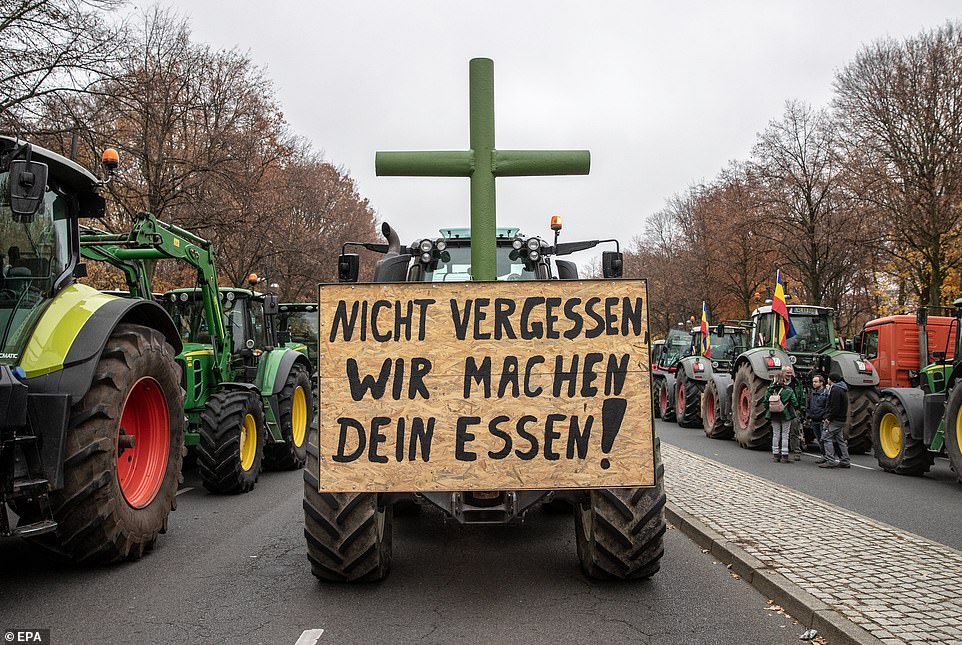 A placard reading ‘Don’t forget we make your food!’ has been painted on to the back of one of the tractors today. Police reported two accidents caused by cars trying to cross the convoy of tractors

‘7.5 billion people; 200 million can feed themselves as hunters and gatherers. The rest need farmers,’ read one banner, while others simply stated: ‘No farmers, no food’ and ‘we fill you up’.

The tractors gathered in the heart of the capital, blocking wide areas of the city with slow-moving convoys on the way in with a plan to cause more disruptions on their way out at rush hour.

Brandenburg police reported two accidents caused by cars trying to pass the lines of tractors on their way in to the city. 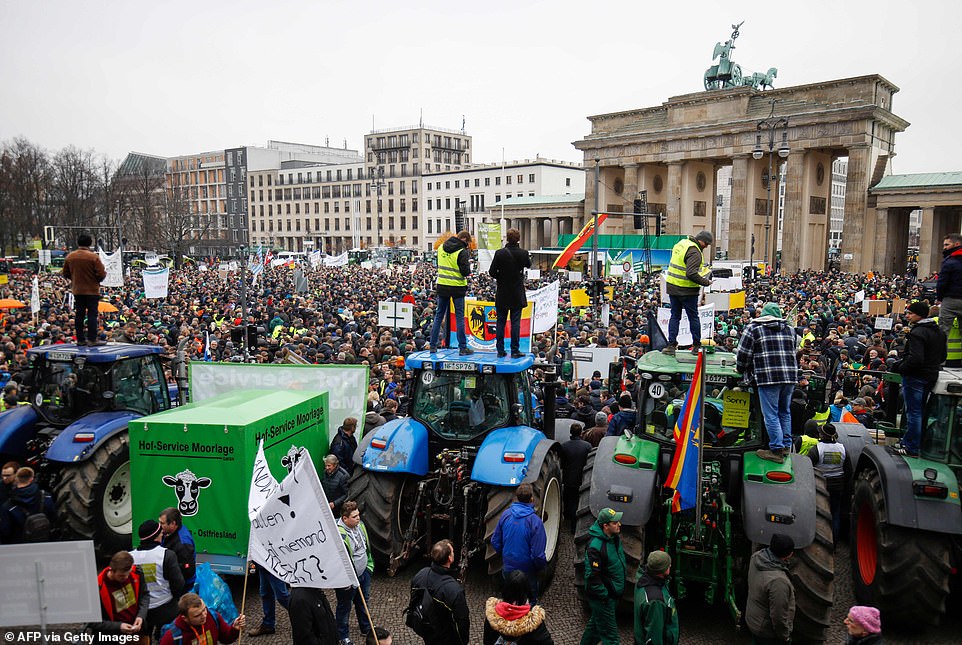 Farmers can be seen standing on top of their tractors in front of the Brandenburg Gate today. The protests are in response to proposals made in September by German Chancellor Angela Merkel’s cabinet 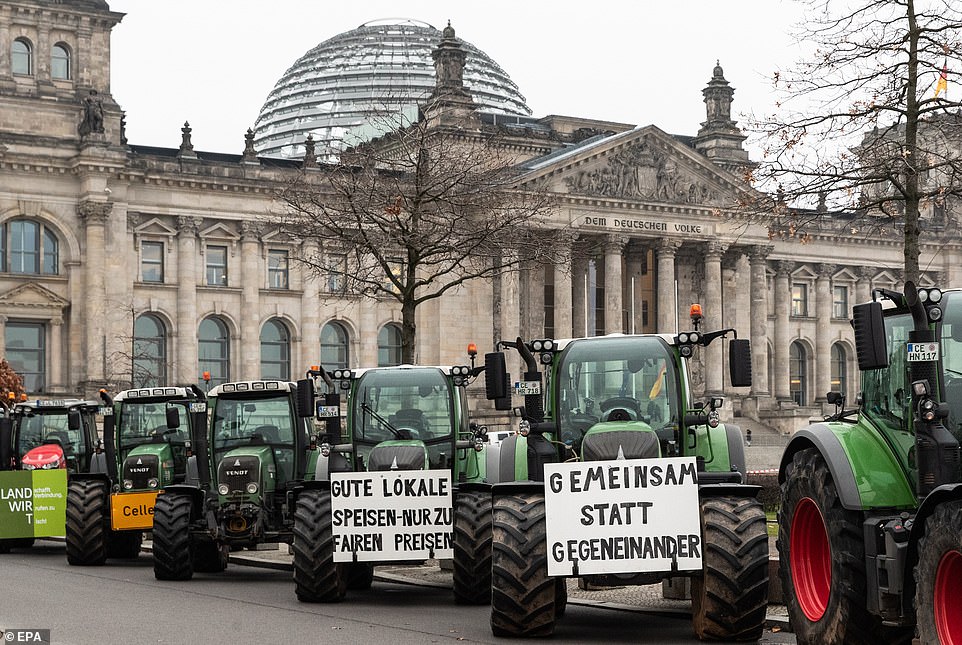 The parked tractors blocked wide areas of the city today before parking in front of the Brandenburg Gate. Others, pictured, parked in front of the Bundestag, the German parliament building. The front placard reads ‘together instead of against each other’ and the second from right reads ‘good local food – fair prices’ 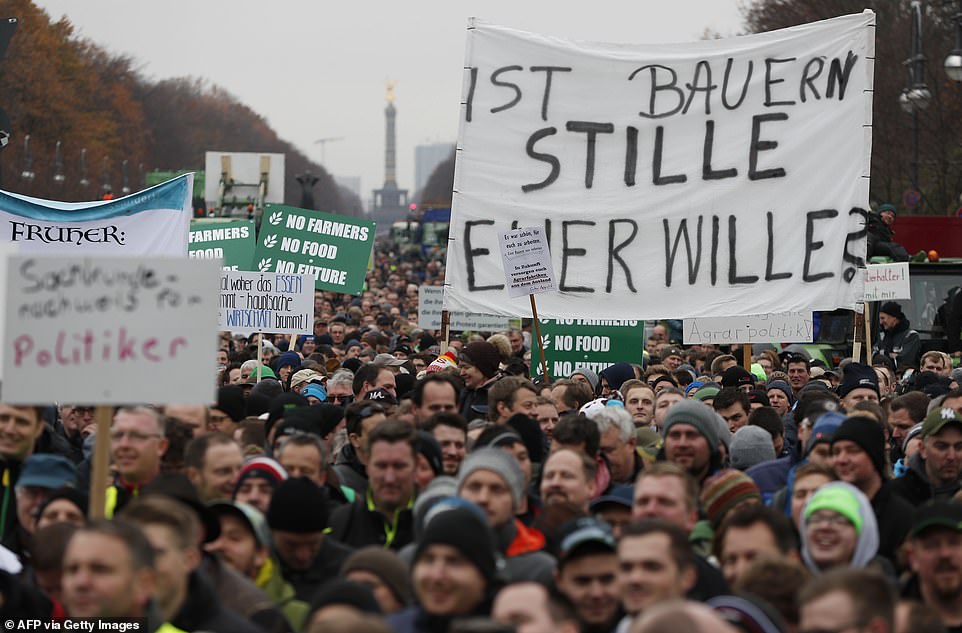 A banner can be seen held by protesters today reading ‘Is the silence of farmers your wish?’ The cabinet proposed restrictions on the use of pesticides and herbicides to protect insects

Chancellor Angela Merkel’s Cabinet in September decided on a series of proposals including tighter restrictions on the use of pesticides and herbicides to protect insects, and on fertilisers to protect groundwater.

The country’s environment minister, Svenja Schulze, said the government is willing to talk to farmers but insisted that they, too, need to play their part in protecting the environment.

‘Farmers need to be part of the solution,’ she told reporters in Berlin, citing the excessive levels of fertilizer in drinking water and the dramatic decline in insect numbers as issues that farmers should be concerned about. 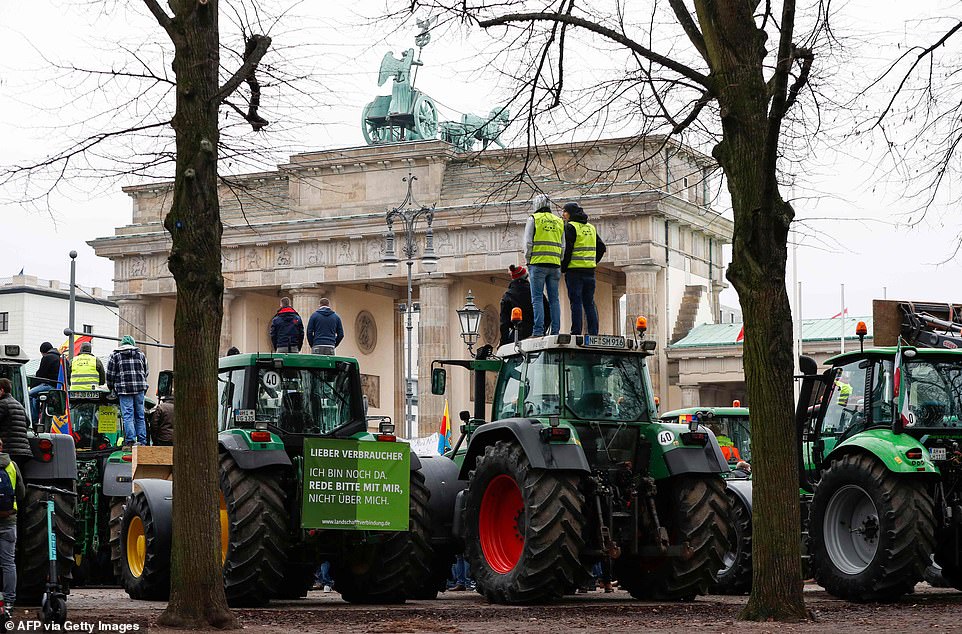 Farmers can be seen standing on top of their tractors in front of Brandernburg Gate today. The protesters stand against the government’s agricultural policy, which includes plans to phase out glyphosate pesticides and to implement more animal protection 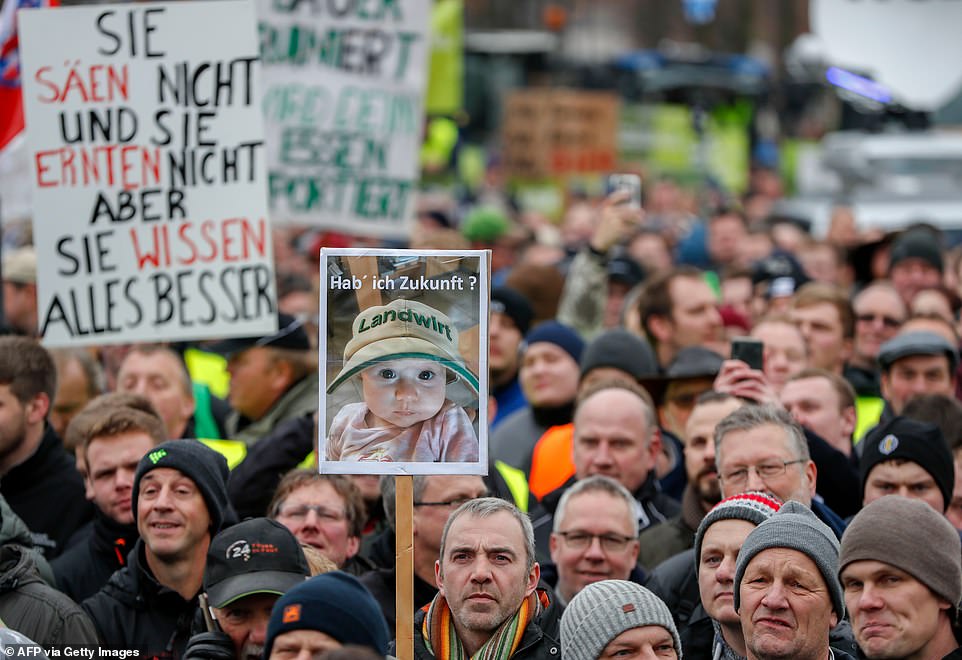 Farmers gather near Brandenburg Gate today with banners reading ‘They don’t sow and they don’t reap, but they know everything better’ 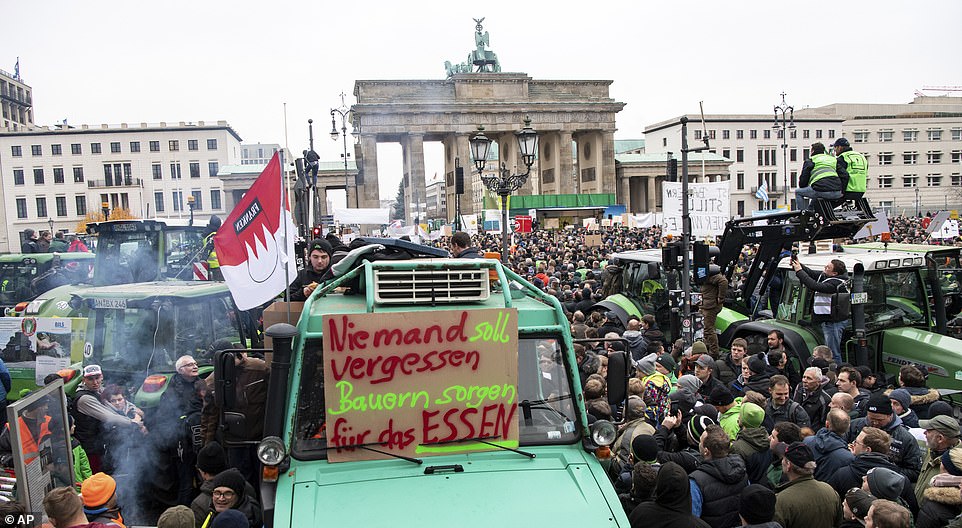 Germany’s environment minister, Svenja Schulze, said the government is open to discussions with the farmers (pictured during the protest today). She added that they still need to play their part in protecting the environment

Farmers’ leaders say the government should work with them and conservation groups to find ways to protect the environment while preserving the competitiveness of farms.

The environmental group Greenpeace criticized both sides, saying that Agriculture Minister Julia Kloeckner was trying to shift the burden onto consumers by saying they’ll have to get used to paying more for food, while the farmers needed to also help fight climate change and species extinction.

‘Farms need clear and reliable guidelines and targeted recommendations,’ said Greenpeace’s agricultural expert Stephanie Toewe. ‘Then they will also have the ability to operate so that the water, animals and climate are protected.’