A 111-year-old woman has become one of the oldest people in the world and the oldest in Chile to recover from the coronavirus after surviving an outbreak in her care home.

Juana Zúñiga, who lives in a care home in capital Santiago, was the oldest resident at the facility when she caught the virus alongside 25 others.

She had already been suffering from respiratory issues when she caught Covid-19, yet care home employees said she was not badly affected by the illness and ‘didn’t show symptoms’.

Juana Zúñiga, 111, (pictured) has become one of the oldest people in the world and the oldest in Chile to recover from the coronavirus after surviving an outbreak in her care home

‘She did not have any symptoms and very few bouts of fever, which was good,’ the director of the care home, María Paz Sordo said.

Zúñiga was separated from the other residents and placed in an isolation ward for 28 days. According to Sordo, ‘taking her out of her habitat was the most difficult thing.’

She officially recovered from the virus on May 10, making her the oldest person in Chile to do so.

Zúñiga has lived in the care home since 2014, following the death of her sister with whom she had lived.

She never married or had children, according to reports.

It comes after a 113-year-old woman, the oldest person living in Spain, become the oldest reported survivor of the coronavirus earlier this month. 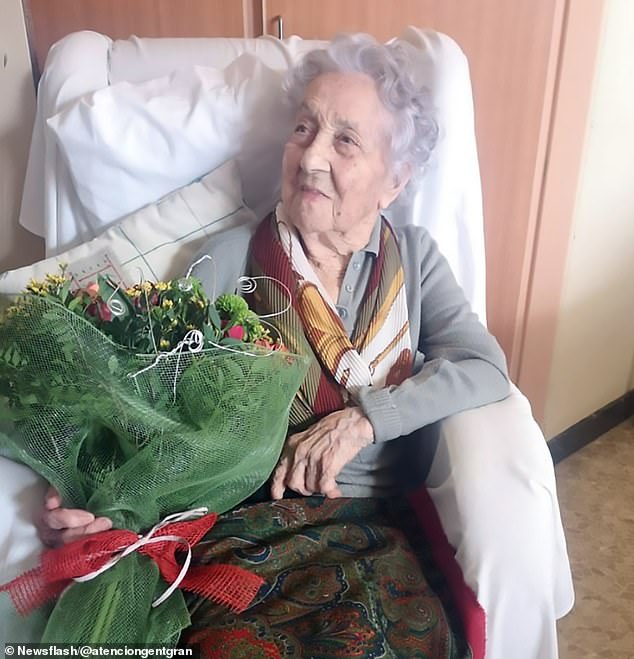 Maria Branyas, 113, is likely to be the world’s oldest person to have survived the coronavirus after catching it in April and later testing negative

Maria Branyas, a mother-of-three, survived COVID-19 whilst in the Santa Maria del Tura care home where she lives in the city of Olot, eastern Spain.

Branyas was originally born in San Fransisco in the United States on March 4, 1907 and lived through the Spanish flu pandemic that swept the world in 1918 and 1919, killing an estimated 50 million people.

Maria is considered the oldest person in Spain by the Gerontology Research Group, a global group of researchers in various fields which verifies and tracks supercentenarians – people who have reached the age of 110.