A single Latin dance workshop for instructors in South Korea is believed to have led to 112 cases of covid-19 after eight of the participants were found to be asymptomatic carriers of the virus.

Nearly 30 instructors from across South Korea were present at the fitness class in Cheonan, on February 15, where they trained together for four hours in ‘warm and moist’ conditions ripe for spreading the disease.

Eight of those instructors, from Cheonan and Daegu, were then tested covid-19 positive around a week later.

A medical worker wearing a protective mask and suit stands at a testing center for the coronavirus disease (COVID-19) in Seoul, South Korea, May 14, 2020

With mild or no symptoms some had continued to teach for a week following the workshop, leading to infections in twelve different fitness facilities in Cheonan.

More than 50 students were infected by their classes – all female with a median age of 42, ten of whom had pre-existing medical conditions – with 70 per cent of cases showing symptoms on average 3.5 days later and 30 per cent asymptomatic.

Investigating the cause of the outbreak surrounding the fitness classes a team at Dankook University Hospital wrote in the journal of Emerging Infectious Diseases: ‘By March 9, we identified 112 Covid-19 cases associated with fitness dance classes in 12 different sports facilities in Cheonan.

‘Half of the cases were the result of direct transmission from instructors to students, and some people went on to infect others outside of class. 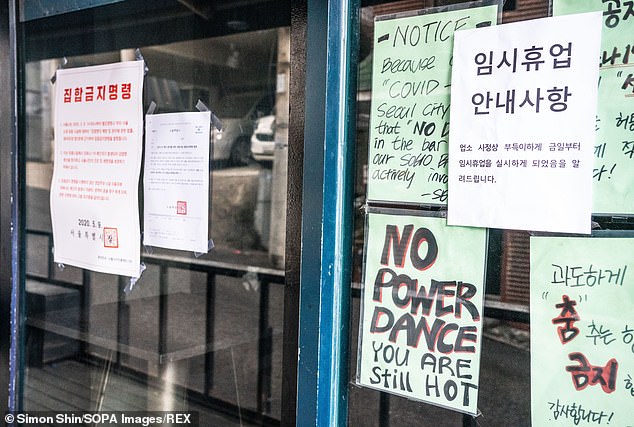 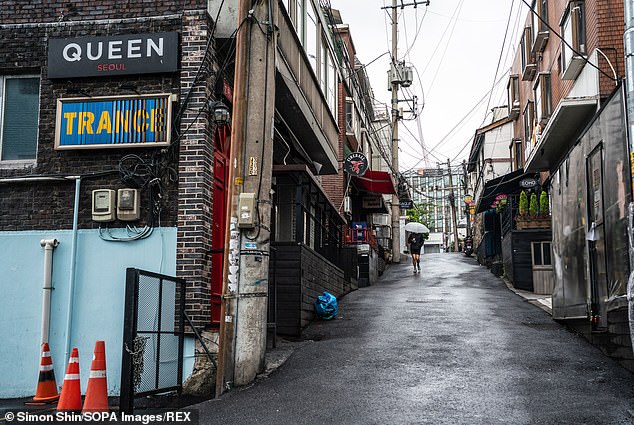 Authorities in the capital city of Seoul have also ordered more than 2,000 clubs and bars to close again after an outbreak of 100 coronavirus cases. Seoul, South Korea – 15 May 2020

‘The instructors and students met only during classes, which lasted for 50 minutes two times per week, and did not have contact outside of class. On average, students developed symptoms 3.5 days after participating in a fitness dance class.’

The team believes a total of 217 students had been exposed the virus in 12 different facilities, with ‘an attack rate of 26.3 per cent’ meaning around a third of those were infected.

Around half of the 112 cases came from direct infection of students by instructors in the dance classes, further infections came as those students returned home to loved ones and infected them.

No infections were found to have taken place in classes with fewer than five participants. 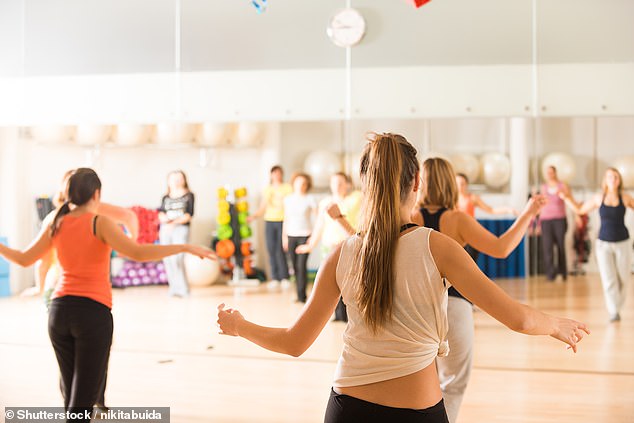 Experts believe it was the growing popularity of Latin music dance classes which often have densely packed rooms which helped spread the virus.

Sukbin Jang, a researcher at Dankook University Hospital wrote in the study: ‘Fitness dance classes set to Latin rhythms have gained popularity in South Korea because of the high aerobic intensity.’

One of the eight instructors taught Yoga and Pilates, none of her students caught the virus from her, leading researchers to hypothesize that ‘lower intensity’ classes do not cause the same transmission effects as the sweaty dance classes.