An amazing video shows a 12-year-old’s brilliant best man speech he put together for his mum and new stepdad on their wedding day.

Jake Milton was given six weeks’ notice to put a speech together for his mum Alysa and partner Tony’s big day in Wickford, Essex in September.

The confident schoolboy took on the challenge and spent weeks practising and looking up ideas on Google.

The sweet video, shared by Alysa on TikTok, shows Jake standing up in a blue suit as he gave the incredible speech in front of loved ones at the intimate wedding reception being held in his garden.

The youngster is initially introduced by 38-year-old Alysa who proudly hands over the mic to her son.

The schoolboy then proceeds to deliver his heartfelt congratulations to Alysa and Tony, 41, opening up the speech by saying: ‘First of all, I am Jake, if you didn’t already know that then you are probably at the wrong wedding.

‘When looking up how to write a best man speech it told me that I should be well prepared and start writing it two months prior.

‘I didn’t really get that chance seeing as they only got engaged about a week ago.

Alysa and Tony gave Jake six weeks’ notice to prepare his wedding speech. He was Tony’s best-man on the big day, pictured 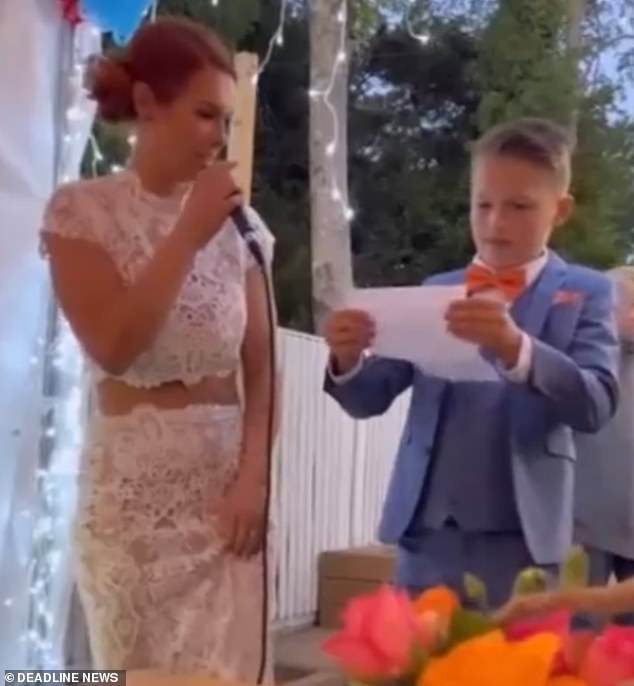 Jake Milton, 12, blew everyone away when he delivered a speech at his mother’s Alysa and step-father Tony’s wedding in September in Wickford, Essex 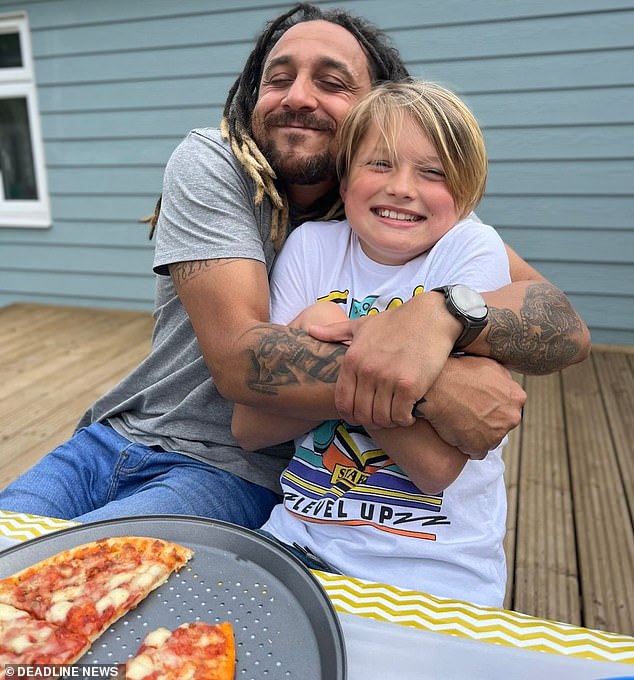 ‘Anyway, moving onto the actual speech. Tony, Tony, Tony, Tony I can’t imagine how my life would have turned out had Mum met someone else all those years ago – maybe Elon Musk or Jeff Bezos.

‘Just someone rich basically. For god’s sake Tony, why do you have to be a police officer?

‘With that being said, I don’t think Elon Musk or Jeff Bezos would wake up at six o’clock in the morning to watch a four hour long superhero film with me.

‘Nor would they let me watch Stephen King’s It when I was only seven, Tony, you’re such a terrible person.

‘I doubt Elon Musk would wake up his stepson in the morning by shooting him in the balls with a Nerf gun or waterboard him when he finally decides to see if he’s strong enough to defeat someone who is built like Dwayne ‘The Rock’ Johnson.

‘I don’t think that Jeff Bezos would have the skills to make a Halloween costume in ten minutes that was so bloody good that it made a four-year-old boy cry and caused the person in the care home window to have a heart attack.’

Family and friends are heard erupting into laughter at the speech as Jake continues: ‘Elon Musk would definitely not have spent three hours at the park teaching me how to use my size and strength in a football match resulting in me getting a yellow card in the first ten seconds of the next game. 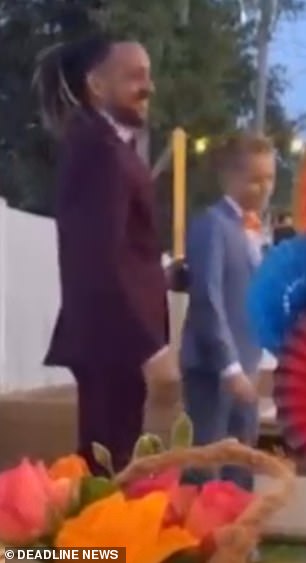 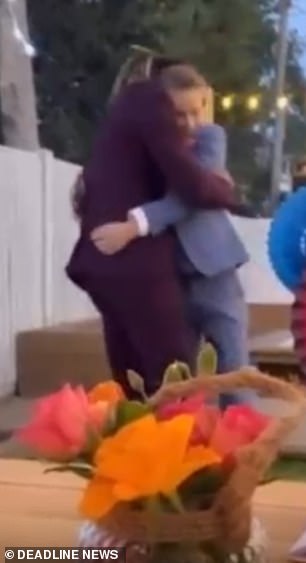 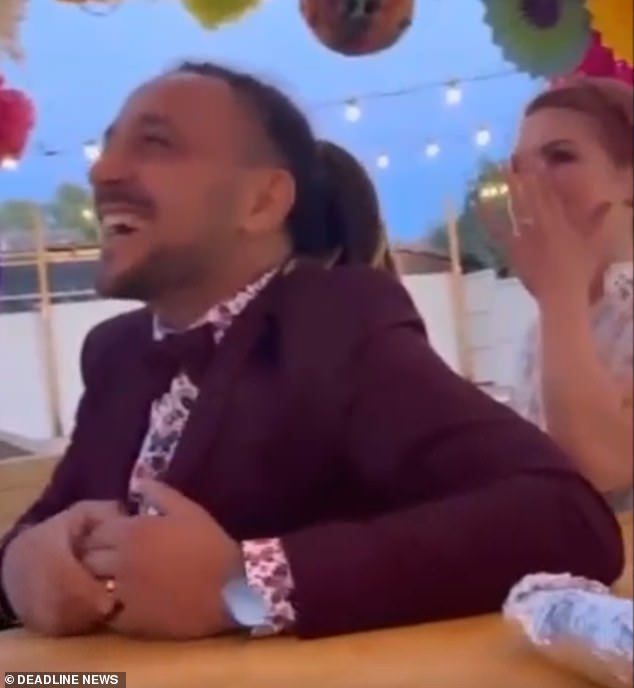 ‘If Elon Musk or Jeff Bezos were my stepdad I would have a king size bed with a television coming out the bottom of it.

‘Actually, come to think of it, I can’t drive. Nah, doesn’t matter, I’d have a chauffeur.

‘I would have a butler so I wouldn’t have to worry about getting moaned at for leaving my glasses and bowls on the side or having a messy room.

‘But in the end yeah, I would have all this stuff but I wouldn’t have Tony. And my mum would have a really ugly new husband. 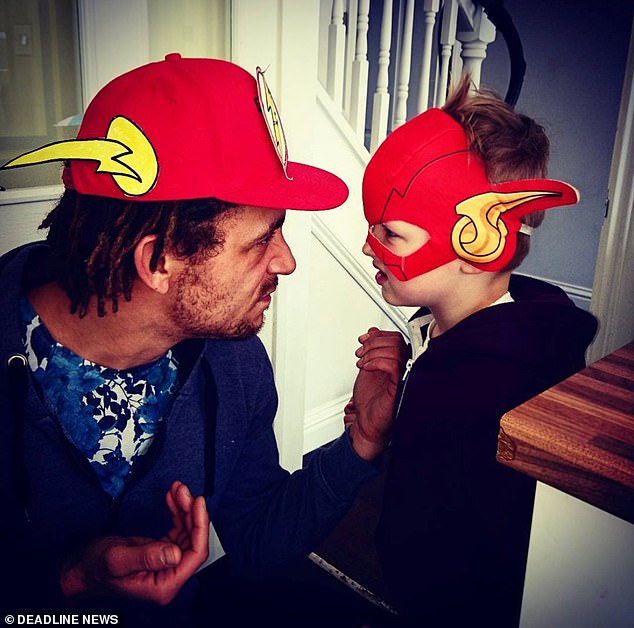 Tony and Jake went he was younger. Alysa revealed she and her husband have been together for eight year and that Jake has known him for most of his life 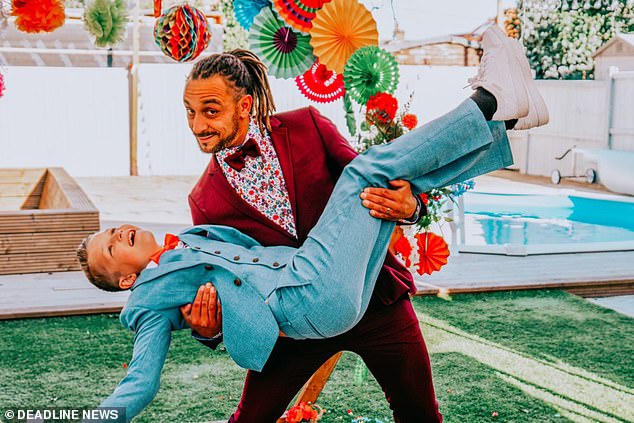 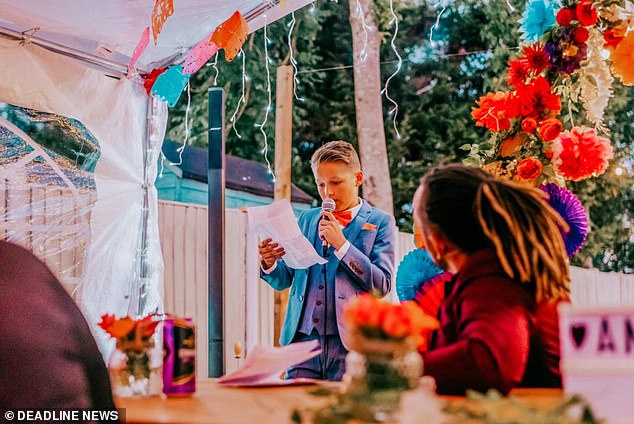 Alysa shared the touching speech on TikTok last month, where it has attracted over 1.1 million views and more than 126,000 likes from impressed viewers

‘So before I run out of suggestions from the best man speech website I would like to conclude by saying here’s to having an averagely paid, moderately handsome but infinitely better stepdad. PS love you Mummy.’

Alysa shared the touching speech on TikTok last month, where it has attracted over 1.1 million views and more than 126,000 likes from impressed viewers.

Thousands of social media users commented on the clip, praising the youngster for putting together such a funny and heartfelt speech.

One said: ‘This is the best best man speech I’ve ever heard, so cute.’ Another wrote: ‘This was the best, what an amazing young man.’

A third commented: ‘This is so cute.’ Another added: ‘Sounds like Jake and Tony are going to be keeping you on your toes.’

Speaking today, Alysa said: ‘We had an intimate family affair in our garden after we got married for the reception. 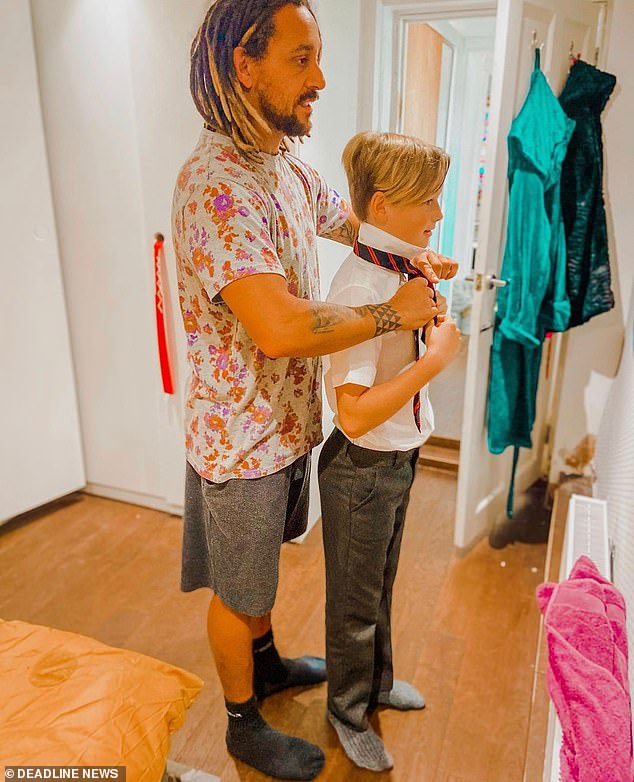 Tony is a present step-father for Jake and has even taught him how to tie a cravat, pictured, before the big day

‘We didn’t give Jake much notice as he only had six weeks but I said to him that I would love for him to give a speech so he began to Google best man speeches.

‘Tony and myself have been together for eight years so he’s known Jake for most of his life and they are like two peas in a pod.

‘They get up ridiculously early to watch movies together and run around with bowls on their head playing with Nerf guns.

‘They adore each other and I think that was clear in the speech.

‘He was great at the speech especially as he didn’t realise initially he would have to give one.

‘I wanted to get married this year as I had been in and out of hospital but I’m much better now and I wanted this year to be remembered for me as the year I got married.’

Aussie shopper sums up his experience in popular stores like Cotton On, Myer and Kookai in brutally honest video: ‘Change my mind I dare you’