13 arrested over plot to kidnap Gov. Gretchen Whitmer and incite a civil war

Thirteen men including seven from a right-wing militia known as Wolverine Watchmen have been arrested over two alleged plots to kidnap Michigan’s Democratic Governor Gretchen Whitmer and incite a ‘civil war’.

Six of the men were taken into custody in a raid on a house in suburban Detroit on Thursday morning. They have been named as Adam Fox, Barry Croft, Kaleb Franks, Daniel Harris, Brandon Caserta and 24-year-old Ty Garbin.

The FBI says they conspired to kidnap Whitmer at her family’s vacation home in Michigan.

Another seven men have been charged by Attorney General Dana Nessell for allegedly plotting to overthrow governments, attack the Michigan State Capitol and incite a ‘civil war’.

Those seven men are members of a militia known as Wolverine Watchmen, one of multiple known militia groups in Michigan.

On Thursday, Whitmer said she was shocked by the ‘depraved’ and ‘sick’ plot. She also blamed the men’s hatred on Trump, who she said had spent the last seven months ‘stoking division’. 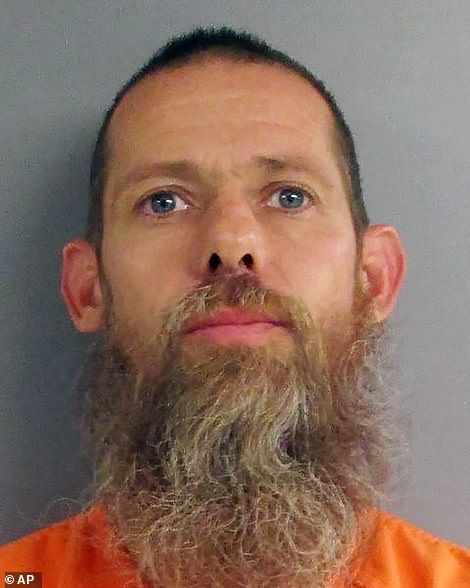 Joseph Morrison and Pete Musico, both 42, were arrested at Musico’s home in Munith and charged on Thursday 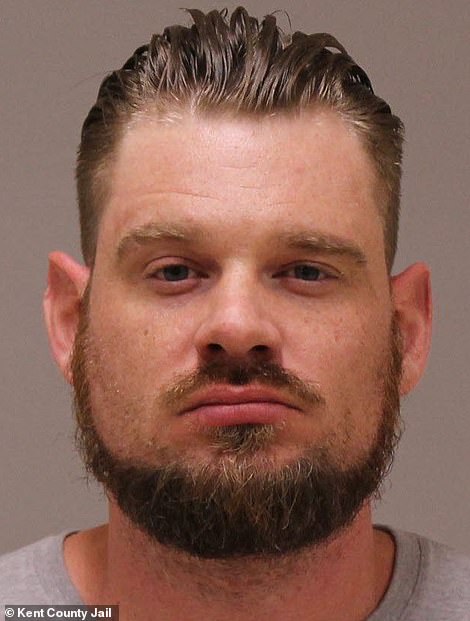 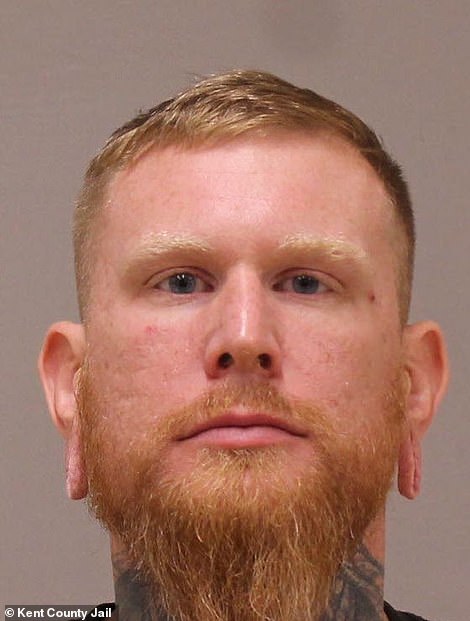 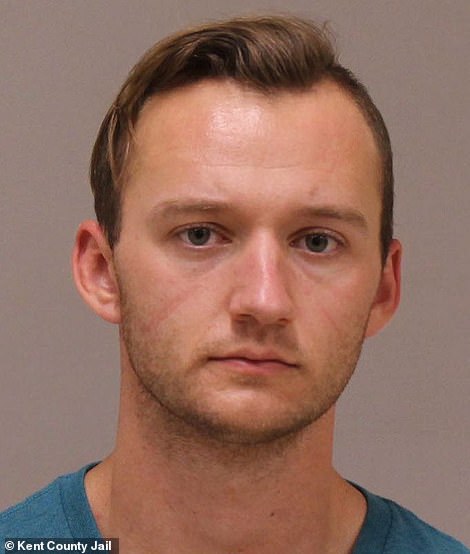 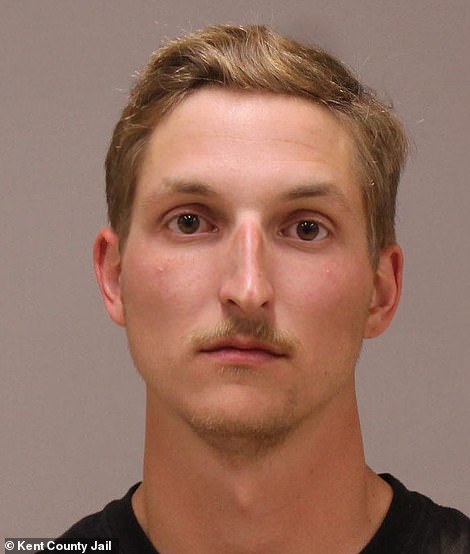 Kaleb Franks and Daniel Harris, another of the two men allegedly involved 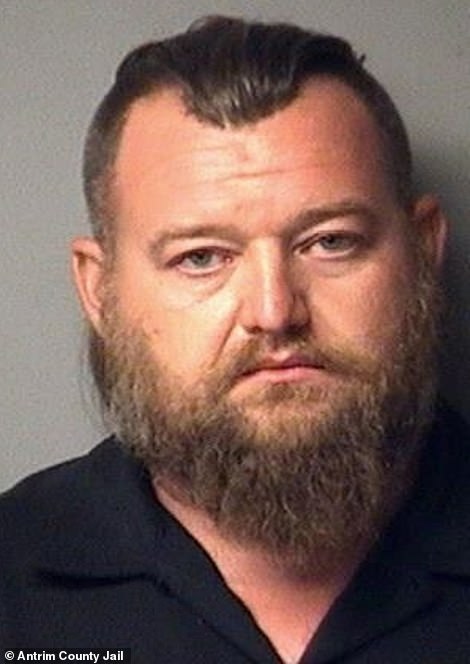 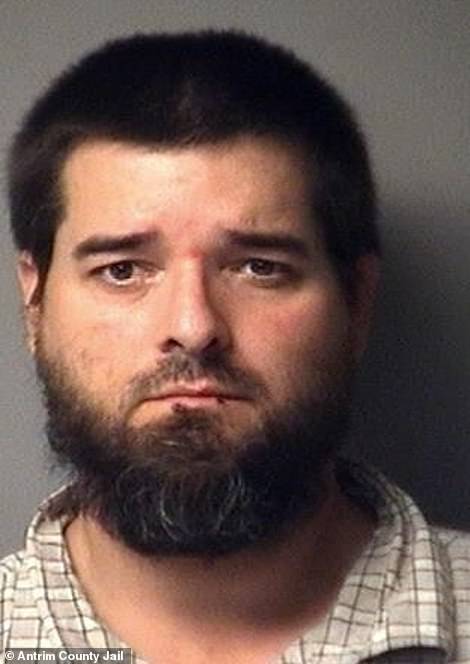 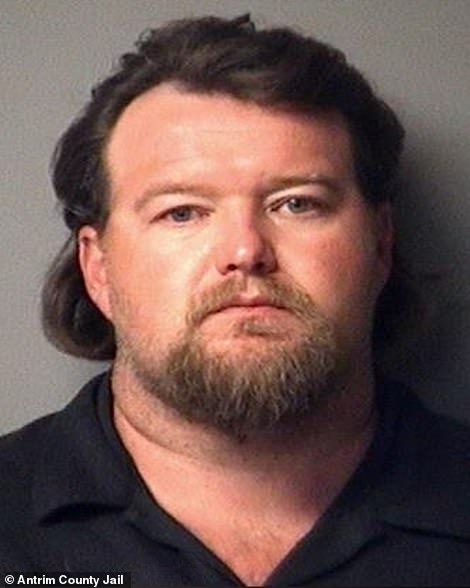 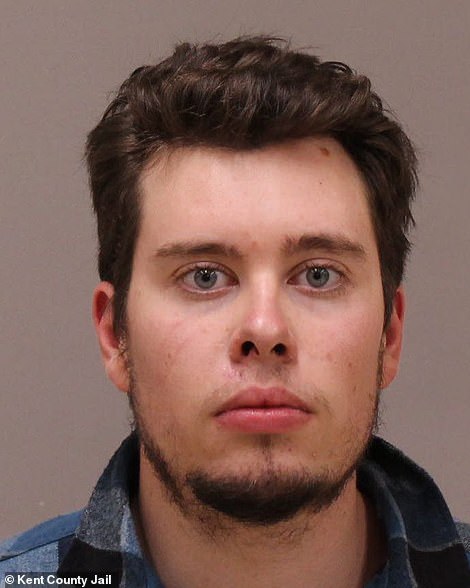 Michael Null, left, an alleged member of Wolverine Watchmen and Ty Garbin, right, who is also said to have been a member 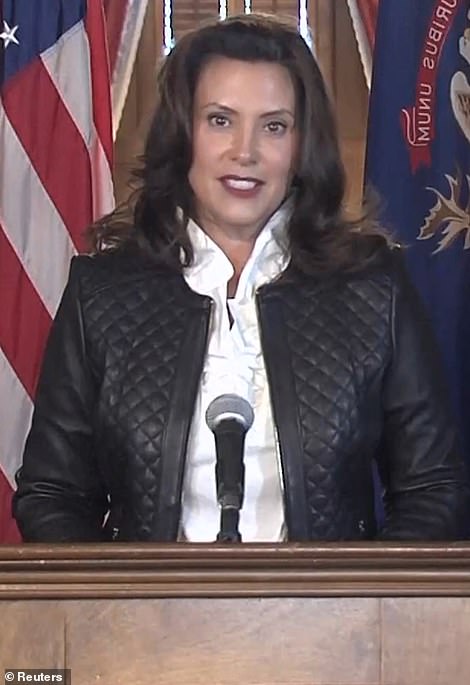 The men were all referred to as extremists on Thursday at a press conference where FBI agents and prosecutors shared details of the plot.

According to authorities, the first group of men started plotting in early June, carried out surveillance on her home and practiced shooting and combat drills. They also tried to build their own explosives, according to the FBI affidavit.

The FBI discovered the plot through an informant who is also part of a known militia that the men tried to recruit from as part of a wider effort to ‘take’ the state capitol with 200 people.

Fox and Croft were the ringleaders, according to the affidavit.

They ‘agreed to unite others in their cause’ to ‘overthrow’ multiple state governments that they believe are violating the US. Constitution’.

In one of the alleged meetings, he talked about kidnapping Whitmer as she made her way into her vacation home, and told one of the other men: ‘Grab the f***** Governor. Just grab the b***h’.’

The alleged plot began with a meeting where the men discussed forming their own ‘self-sufficient’ society in early June.

‘At one point, several members talked about state governments they believed were violating the US Constitution, including the government of Michigan and Governor Gretchen Whitmer,’ the FBI affidavit claimed.

The men then tried to recruit members of the Michigan militia group to help, the affidavit claims.

In one phone call that the FBI informant recorded on June 14, Fox said he needed 200 men to storm the Capitol building in Lansing and take hostages including the Governor.

He said they would ‘try the State Government for treason’ and that he would do all of this before the election.

On June 20, the men met at Fox’s store in Grand Rapids.

They held a meeting in the basement which was accessed through a trap door, hidden under a rug. Fox then made them all put their cell phones in a box which he took upstairs. The FBI informant was wearing a wire. 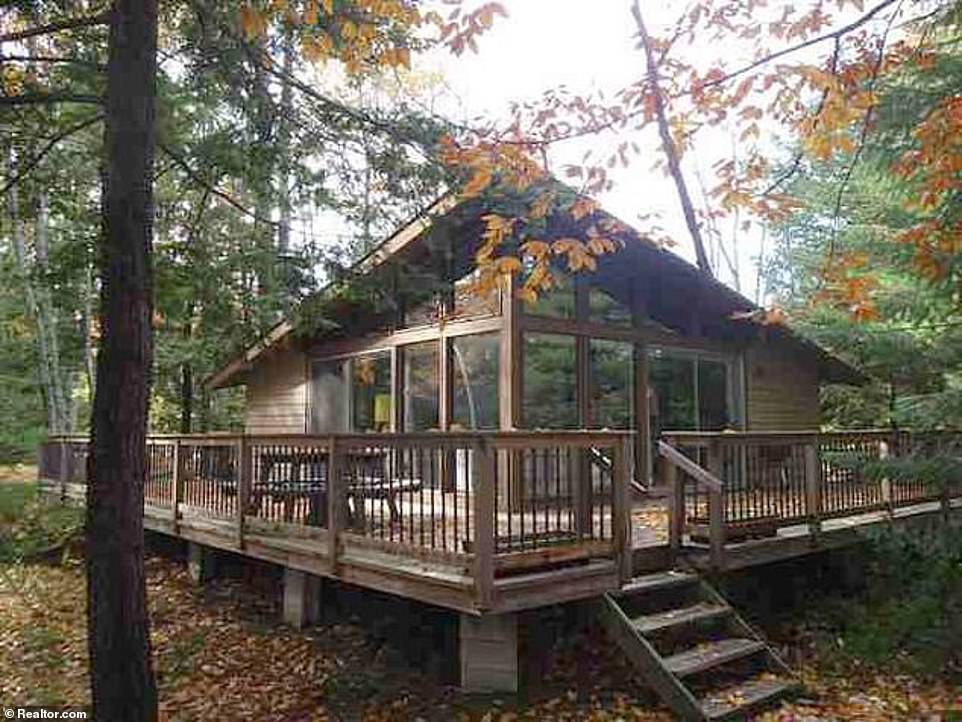 Whitmer and her husband’s vacation home in Michigan, where the group had carried out surveillance 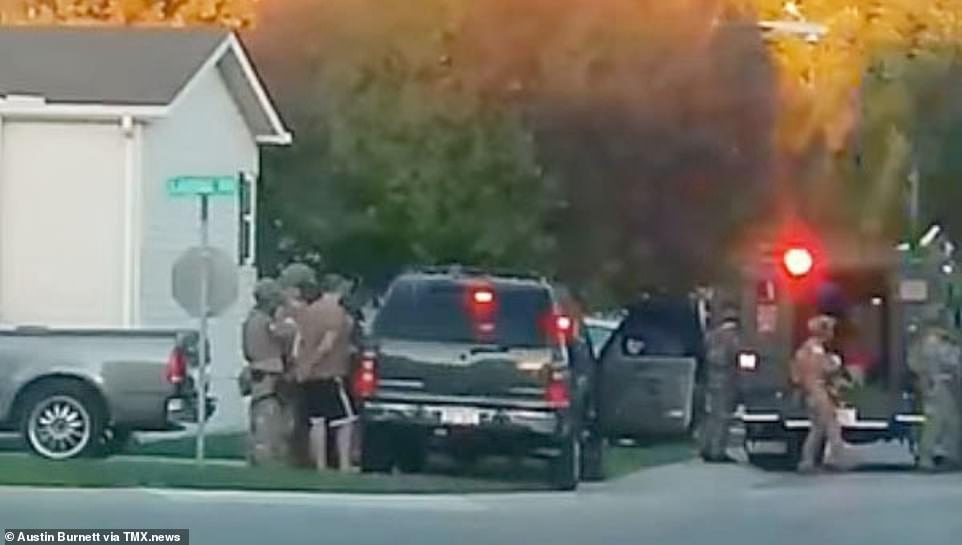 The FBI were seen raiding the property in Detroit on Thursday morning. FBI agents filed their affidavit hours later 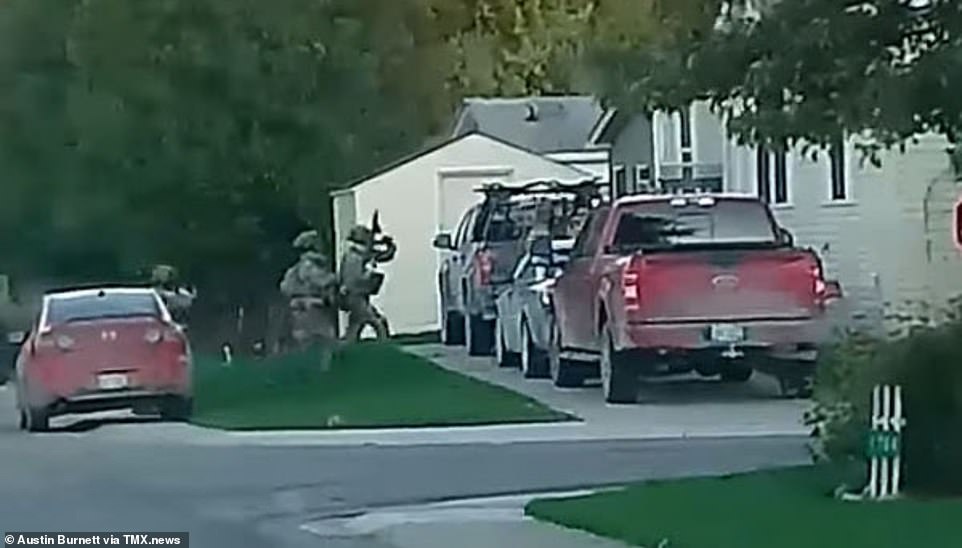 Six people were arrested in the early morning raid, that was the result of information an informant who is infiltrated in the militia gave the Feds 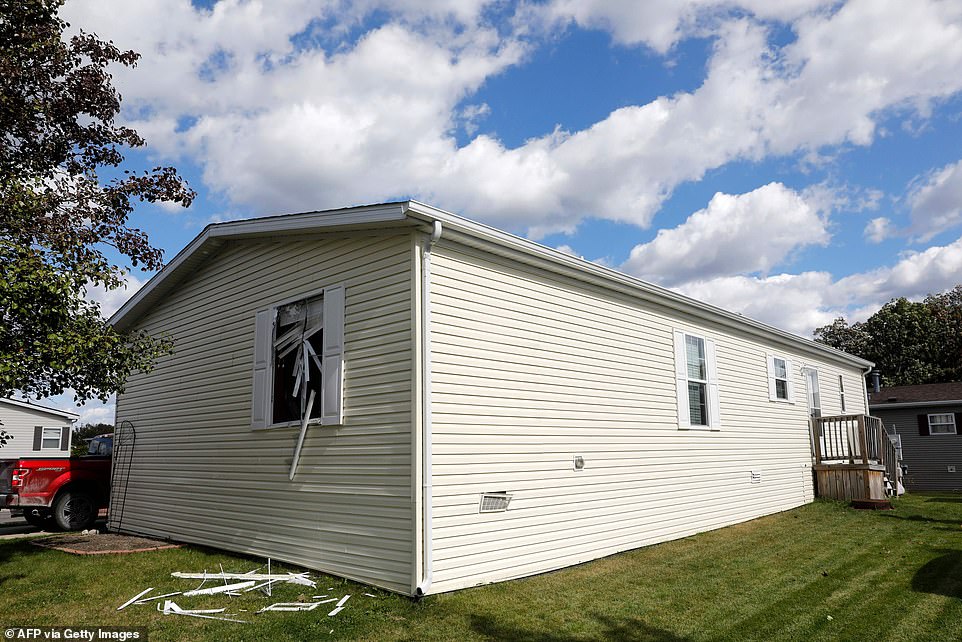 One of the homes that was raided in Hartland, on the outskirts of Detroit, on Thursday 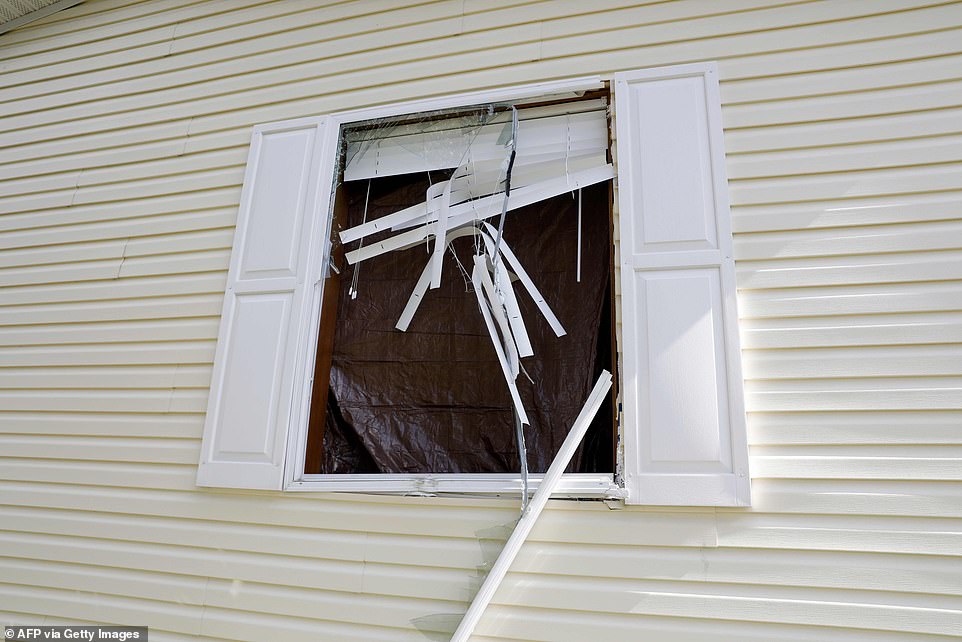 Broken windows at the home in Michigan on Thursday afternoon 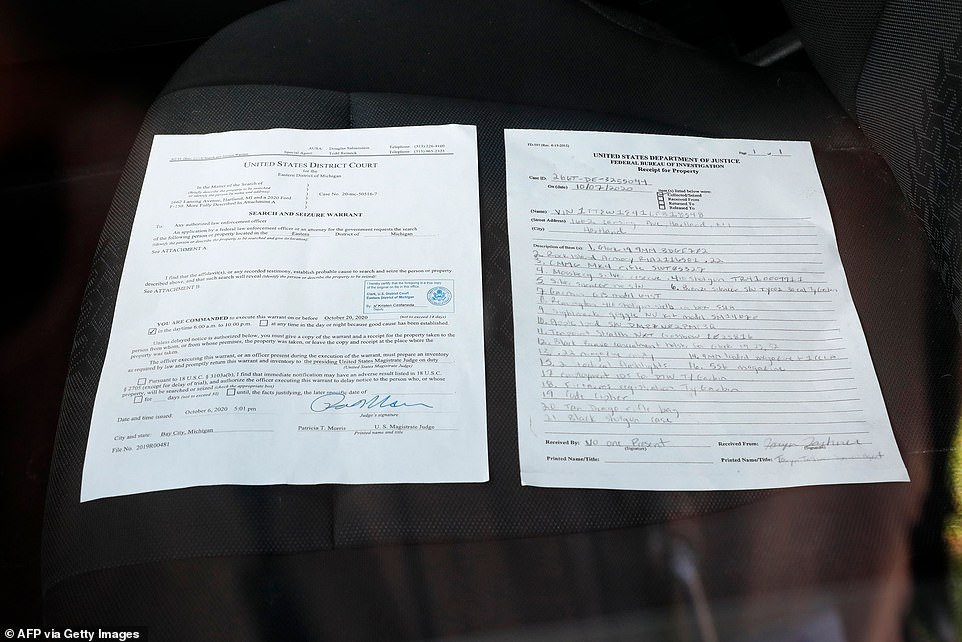 At that meeting, the men discussed using ‘Molotov cocktails’ to attack police and take the Capitol Building.

At her press conference on Thursday, Whitmer tried to pin some of the hatred for her on Trump.

‘This should be a moment for national unity when we all pull together as Americans to meet this challenge head on. Seeing the humanity in one another and doing our part to help get out country through this.

‘Instead, our head of state has spent the last 7 months denying science.

‘Just last week , the President of the United States stood before the American people and refused to condemn white supremacists and hate groups like these two militia groups.

“Stand back and stand by.”

‘When our leaders speak, their words matter. They carry weight. When our leaders meet with, encourage or fraternize with domestic terrorists, they legitimize their actions and are complicit.

On June 25, Fox live streamed a video on a closed Facebook group where he ranted about Whitmer, calling her a ‘tyrant b***h’.

He said: ‘I don’t know, boys, we gotta do something. You guys link with me on our other location system, give me some ideas of what we can do.’

On June 28, Fox, his girlfriend, Garbin, Franks and Caserta attended a training exercise in Munich, Michigan, at one of the Militia member’s houses.

Franks left afterwards. Fox, Garbin, Caserta and the informant remained. They were told to leave though if they did not want to participate in the attacks against the government and politicians.

Between July 10-12, the group attended a different training exercise in Wisconsin.

They practices shooting and combat drills and, according to the FBI, some of them tried to build  IEDs with ‘black powder, balloons, a fuse, and BB’s for shrapnel’.

‘They were faulty and didn’t detonate as planned but the attempted explosions were recorded on video.’

On July 18, some of the men met again in Ohio and discussed attacking a Michigan State Police facility. Garbin then discussed ‘shooting up’ Whitmer’s vacation home.

That day, he also said he did not want to go after the Capitol but was ‘cool’ with trying to kidnap her from her vacation home.

On July 27, Fox told the informant that their best chance of kidnapping Whitmer would be as she was arriving or leaving her vacation home or the Governor’s summer residence.

Later that day, on a group chat, he wrote: ‘OK, how’s everyone feeling about the kidnapping?’ None of the others replied.

The following day, he wrote on a Facebook group: ‘We about to be busy ladies and gentlemen…This is where the Patriot shows up. Sacrifices his time, money, blood sweat and tears… it starts now so get f*****g prepared!!!’

According to the FBI affidavit, the men planned to then move her to a secure location in Wisconsin, where they would put her on ‘trial’ but they did not have a location in mind, and planned to use a realtor to find the safe house.

On Thursday, Whitmer responded to the plot at a press conference where she appeared to blame the men’s antics on Donald Trump, one of her most vocal critics.

‘When I put my hand on the Bible and took the oath of office 22 months ago, I knew this job would be hard but I have to be honest, I never could have imagined anything like this,’ she said.

She called the men ‘sick and depraved’ and said now is a time for ‘unity’ and not ‘more division.’

The Democratic Presidential candidate, Joe Biden, also said Trump was to blame for the plot. 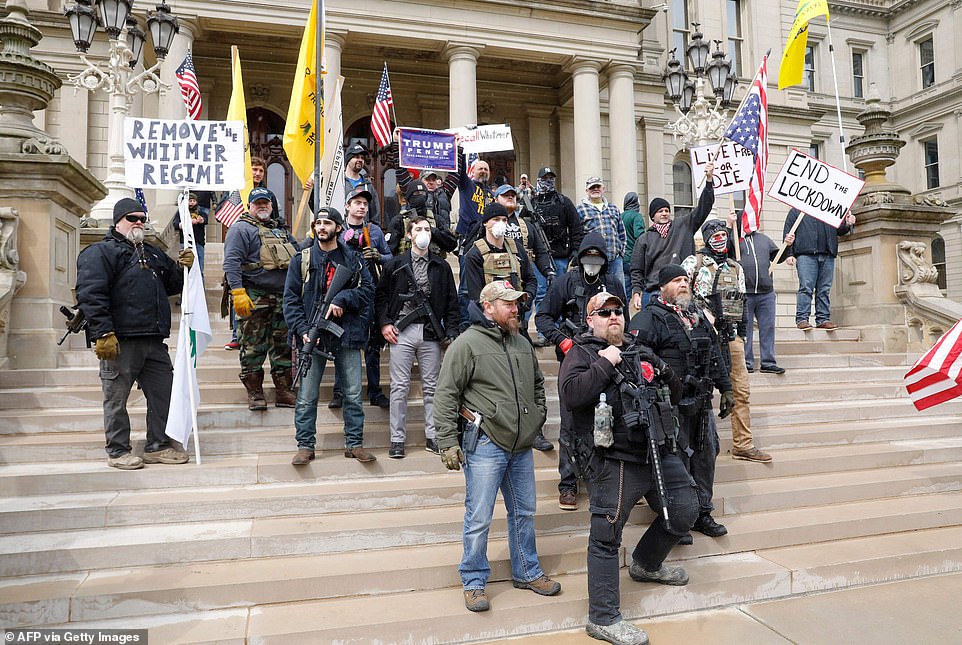 Whitmer was widely condemned in Michigan for enforcing a lockdown to stop the spread of COVID-19. Above, protesters on April 15 storming the state capitol with guns. The FBI says some of the men indicted were there

‘The words he utters matters,’ Biden said as he landed in Phoenix, Nevada to campaign with Kamala Harris and John McCain’s widow, Cindy.

Asked if he thought Trump’s ‘LIBERATE MICHIGAN’ tweet encouraged militias like this, he said ‘yes I do.’

‘Why won’t the president just say “stop. Stop, stop, stop” and we will pursue you if you don’t,’ the Democratic candidate added.

Whitmer was widely criticized for her tough lockdown rules in Michigan earlier this year.

There were widespread protests in the state by people who said they wanted the right to continue to work, including by some who stormed the state capitol with guns.

Her residence has received security updates in recent weeks.

On Thursday morning, three hours before the FBI announcement, Trump called Whitmer the ‘lockdown queen,’ having previously called her ‘that woman from Michigan.’

He told Fox Business News’ Maria Bartiromo: ‘I won Michigan, which hadn’t been won in decades and decades.

‘And we should win it again because I brought so much business there because she’s the lockup queen.

‘What she’s done to that, that place is horrible. She’s locked it up. She’s got people like living in prison. The courts just overturned her. They said what you’re doing is unconstitutional.’