More than 140,000 Mail on Sunday readers have demanded that the Government block any attempt to remove the statue of Sir Winston Churchill from outside the Houses of Parliament.

The extraordinary show of support comes after this newspaper urged Boris Johnson to make a public pledge that the monument would never be moved, after it was attacked by protesters.

The statue, which had been daubed with graffiti branding Churchill a ‘racist’, was boarded up with metal sheeting last week amid fears that it would be a target during demonstrations.

More than 140,000 Mail on Sunday readers have now signed a petition urging the Prime Minister to publicly guarantee that the Winston Churchill monument (pictured) will never be taken down

Petitions by Left-wing activists demanding its removal have received thousands of signatures online and there is also a petition targeting a Churchill mural in Croydon, South London. The Prime Minister condemned the move as ‘absurd’ and ‘shameful.’

And within 24 hours of our petition being launched last week, Mr Johnson promised to fight with ‘every breath in his body’ against its removal.

As of last night, an astonishing 135,431 readers had signed our online petition demanding the statue remain.

In addition, 8,427 letters of support from readers were hand-delivered to the gates of Downing Street by The Mail on Sunday.

Among the readers who put pen to paper was Zbigniew Szpedkowski, a 71-year-old who was among the first generation of Poles brought up in the UK after the war. He wrote that his parents ‘always felt indebted and grateful for the British people, led by Churchill, in going to war on behalf of the Polish nation when it was invaded by the Nazis.’ 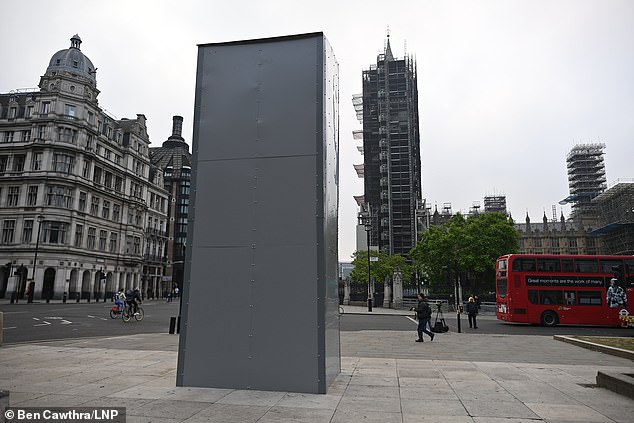 Churchill, who twice led the nation as Prime Minister, is considered a national hero and consistently tops polls to name the greatest-ever Briton. His Grade II listed bronze monument was installed in 1973 at the north-east corner of Parliament Square.

Thank you for signing The Mail on Sunday’s Save Churchill petition. The petition will be sent to Downing Street but your personal data will be held by DMGT in accordance with this ‘petition’ and will not otherwise be shared with any third parties. For more information on how we store and process data please visit our privacy policy here.