Multiple groups of lions at two separate zoos across the U.S. have tested positive for COVID-19, specifically the delta variant, the animal sanctuaries said on Monday.

Eleven African lions at Colorado’s Denver Zoo and four from Utah’s Hogle Zoo have been observed experiencing symptoms of the virus, including coughing, sneezing and acting lethargic.

The 11 lions at the Denver Zoo, all between the ages of 1 and 9 years old, were tested via nasal swabs at Colorado State University Veterinary Diagnostic Laboratory in Fort Collins, and confirmed positive by the United States Department of Agriculture’s National Veterinary Services Laboratories.

‘There have been a number of big cats to come down with COVID-19 at zoos throughout the country, including our two tigers, Yuri and Nikita,’ said Brian Aucone, Senior Vice President for Life Sciences for the Zoo, in a statement.

‘Fortunately, the vast majority have fully recovered, and the upside is that there’s an established knowledge base for us to draw from to help treat our animals.

‘We’ve been in touch with other zoos that have also recently managed COVID cases in their big cats to inform the care we’re providing.’

Multiple prides of lions at separate zoos across the U.S. have tested positive for the delta variant of COVID-19 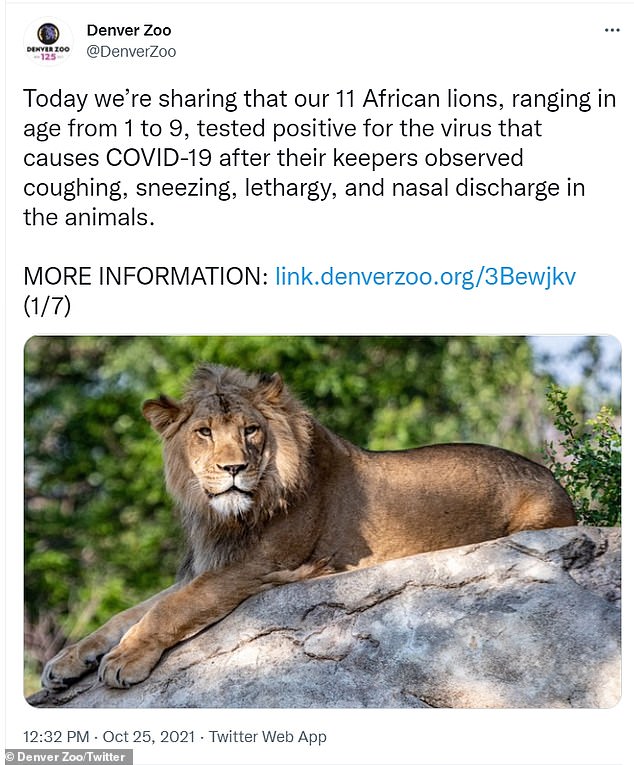 Eleven African lions at the Denver Zoo tested positive for the virus and were observed experiencing symptoms of the virus, including coughing, sneezing and acting lethargic 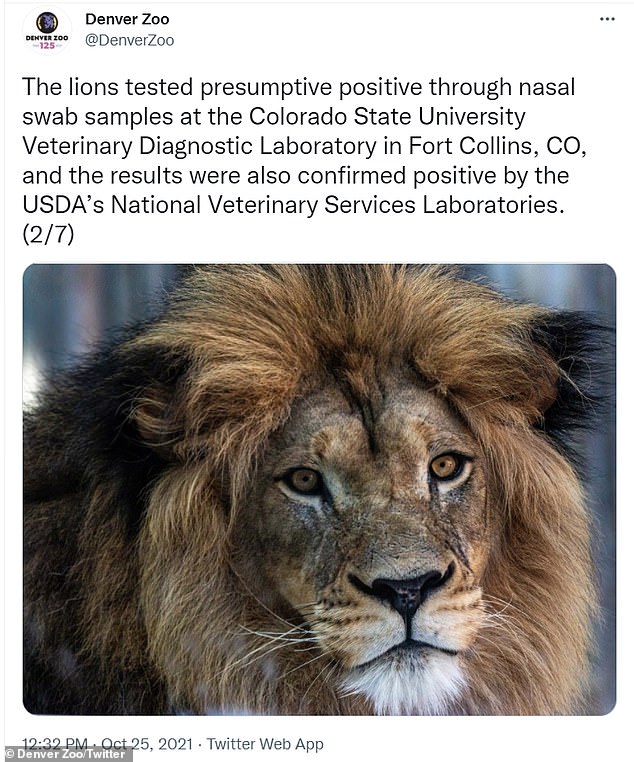 The 11 lions at Denver’s zoo are between the ages of 1 and 9, but most have recovered

All started showing symptoms after the zoo announced that Yuri and Nikita (part of the family group) tested positive, but ‘there is no indication that the two groups of positive cases are connected,’ the zoo added.

None of the lions have been vaccinated yet, the Denver zoo said, but they will be — along with the zoo’s tigers — once more doses of the animal-specific vaccine is available.

The zoo added it would watch and monitor the lions’ behavior and symptoms.

Utah’s Hogle Zoo is also dealing with a small outbreak of COVID-19 in its lion population, as four of the zoo’s five African lions have tested positive via a nasal swab.

Zoo officials said they did not know how the lions contracted the virus.

‘The health and safety of UHZ staff, animals and visitors continues to be our primary concern,’ Hogle Zoo wrote in a Facebook post.

‘Prior to these positive cases in the lions, UHZ established a stringent animal care COVID-19 safety plan. 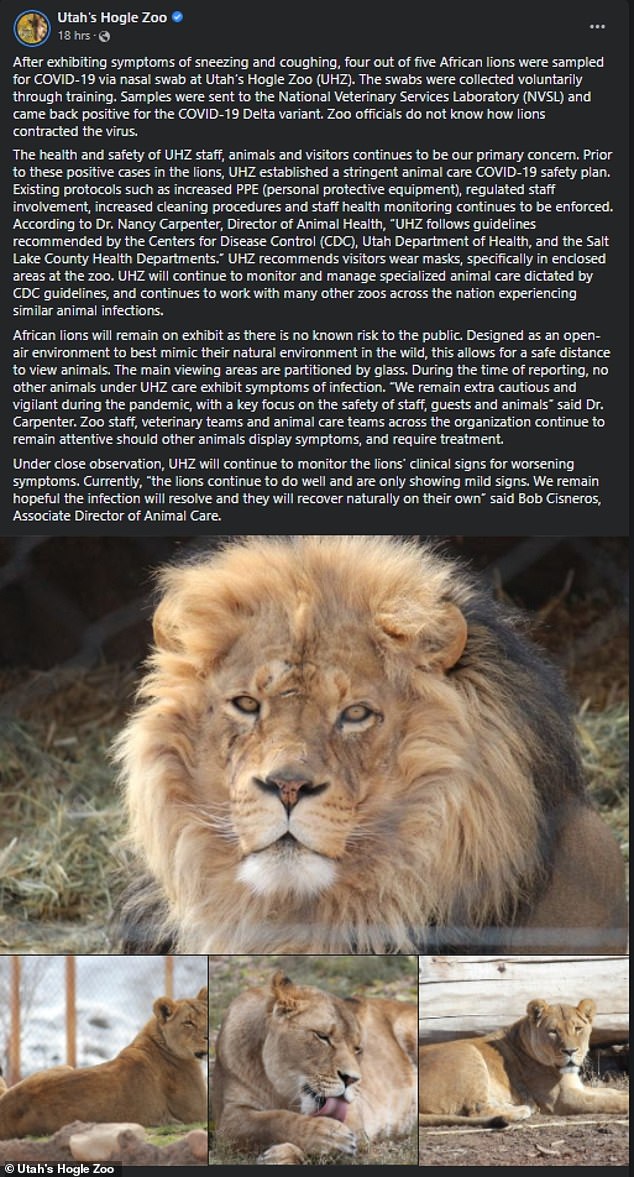 Four of the five lions at Utah’s Hogle Zoo tested positive via a nasal swab. The lions will continue to remain on exhibit for viewers, ‘as there is no known risk to the public,’ the zoo said

The lions will continue to remain on exhibit for viewers, ‘as there is no known risk to the public,’ the zoo added in the statement.

‘Designed as an open-air environment to best mimic their natural environment in the wild, this allows for a safe distance to view animals.’

The zoo said that no other animals under its care are exhibiting symptoms of infection, but they will remain vigilant about safety.

‘We remain extra cautious and vigilant during the pandemic, with a key focus on the safety of staff, guests and animals’ said Dr. Nancy Carpenter

The zoo said it will continue to monitor the lions’ for worsening symptoms, but presently, they ‘continue to do well and are only showing mild signs.’

‘We remain hopeful the infection will resolve and they will recover naturally on their own,’ said Bob Cisneros, Associate Director of Animal Care.

Cats appear to be ‘mildly susceptible’ to COVID-19, according to the Cornell University College of Veterinary Medicine.

However the severity of the disease that causes SARS-CoV-2 is unclear at this time.

In July, a study found that household cats are more susceptible to coronavirus infection than dogs.

There is no evidence that SARS-CoV-2 can be passed from cats to people, but the Centers for Disease Control and Prevention recommends that if a feline caretaker is diagnosed with COVID-19, they should quarantine themselves from people and animals.

Last week, a domestic shorthair cat in Michigan’s Ingham County became the first pet in the state to test positive for COVID-19.

The cat was sneezing a lot, but has since recovered.

Separately in July, the U.S. Department of Agriculture said that more than half of the white-tailed deer in Michigan were infected with COVID-19, sparking concerns of a large viral reservoir among wild animals.

ANIMALS AND THEIR IMPACT ON COVID-19

The exact source of Covid-19 is unknown, according to the CDC, ‘but we know that it originally came from an animal, likely a bat.’

At this time, there is no evidence that animals play a significant role in spreading the virus, the CDC added.

Studies suggest that while animals can develop virus antibodies, the risk of passing it to humans, or between other animals is very low.

‘We are still learning about this virus, but we know that it can spread from people to animals in some situations, especially during close contact,’ the CDC has warned.

‘People with suspected or confirmed COVID-19 should avoid contact with animals, including pets, livestock, and wildlife.’

There is a risk of animals, particularly domestic pets, becoming a ‘reservoir’ for the virus, allowing it to be spread back to humans even after it has been removed from human populations.