15-year-old singer baffles her YouTube fans after revealing that she wakes up to workout at 4:35 AM

A YouTuber teen who rises at the ungodly hour of 4:35 AM to squeeze in a workout has baffled her social media followers.

Caroline Manning, 15, hits the gym first thing with her mom before a day of school.

The Texas-based social media star, who has 760,000 followers on the platform thanks to her singing videos, shared an insight into a ‘typical’ morning.

No rest for the wicked: Caroline Manning, a 15-year-old YouTuber, revealed to fans in a video watched by 2.6 million people that she wakes up at 4:35 AM to exercise before school 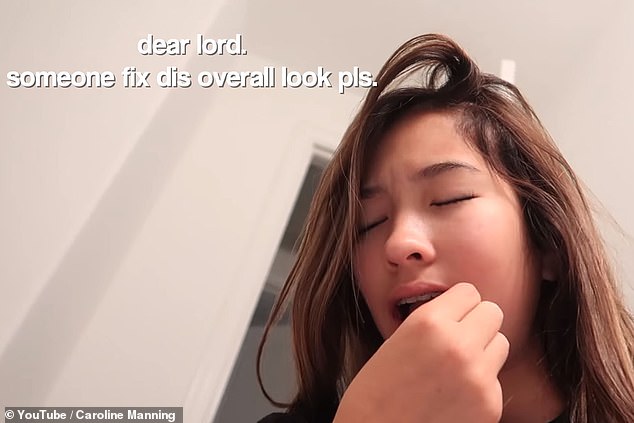 Tired: After snoozing for just five minutes, Caroline is up and ready to start her day by 4:35 AM 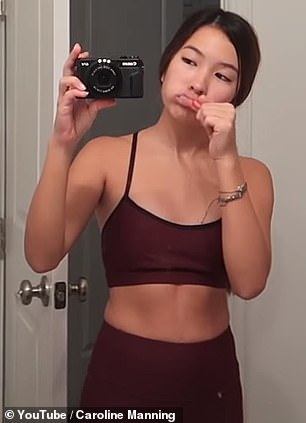 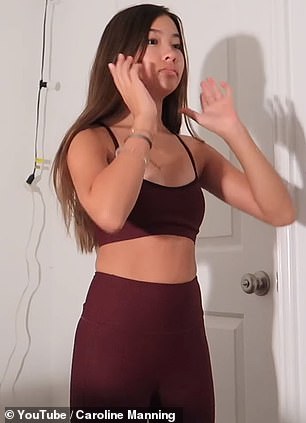 Getting ready: The Gen Z YouTuber vlogs her getting ready process, before leaving the house at 4.59 AM 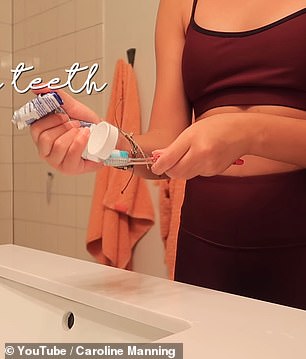 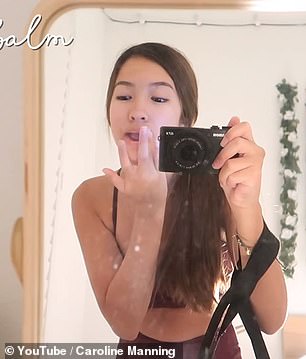 Prep: The teen washes her teeth, left, and applies Glossier lip balm, right, before heading out to the gym

With thousands of people commenting about the early rising time, Caroline said: ‘Some of y’all are probably wondering, like, why am I working out in the mornings if I do CrossFit and stuff?

‘My grades have not been very good. But I’m going to take a little break from it. I’m going to start trying harder on my grades, even though this last six weeks of school has been so hard for me.’

Caroline snoozes for a mere five minutes before getting ready in her matching maroon athleisure set, taking her Glossier lip balm, a resistance band and hydro flask with her as she heads out the door before the clock strikes 5 AM.

At the gym, she stretches and warms up on the treadmill before diving into her upper body-focused strength training routine – pausing only to let out a yawn.

Post-workout, she drives back home with her mom, who also worked out.

‘That was rough. I was tired,’ her mom says to the camera. 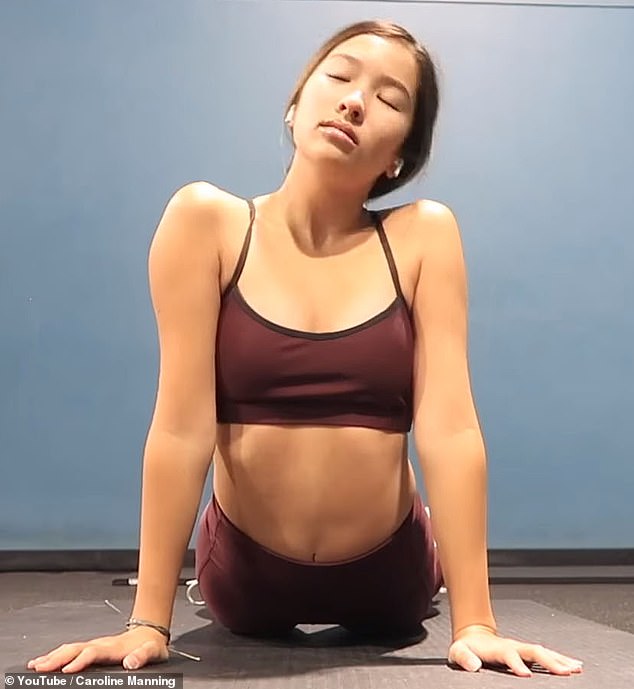 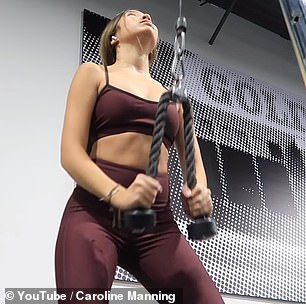 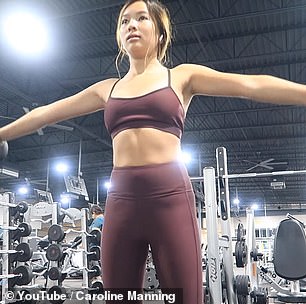 Grades: As her grades are suffering, Caroline said she might give her workout routine a break 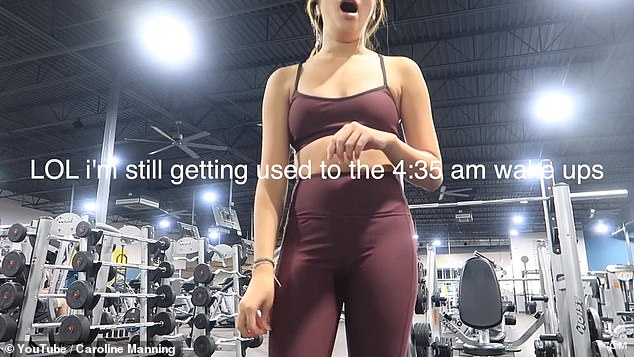 Yawn: The early wake up call hits towards the end of the workout, when Caroline can be seen yawning 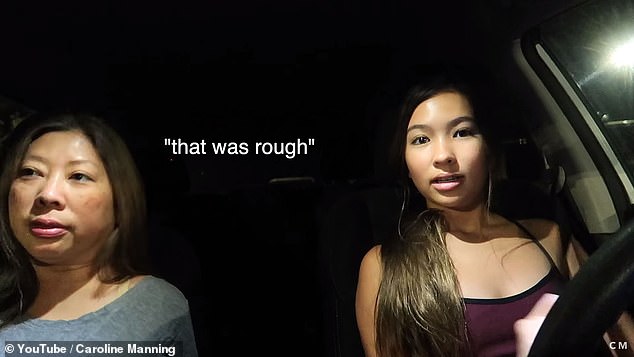 While she showers and carries out her extensive getting ready routine, her mom prepares her eggs, cinnamon waffles and raspberries.

Caroline noted that she’s lucky her mom makes her breakfast, as she wouldn’t have the time to do so herself.

All fed by 6.45am, she is setting up her Tripod ready to record a vlog while she does her minimal makeup.

Talking to the camera, she reveals that her secret to getting a full night’s sleep is to use Apple’s ScreenTime function to disable her social media apps from 7 PM – 7 AM.

Another one of her secrets? Making sure she hits the hay by the early hour of 7:45 PM.

In another YouTube video documenting her evening routine, Caroline revealed that she needs to get as much sleep as possible – with the aim of getting around nine hours of snooze time – and therefore has to make sure she is in bed and ready to sleep before 8 PM. 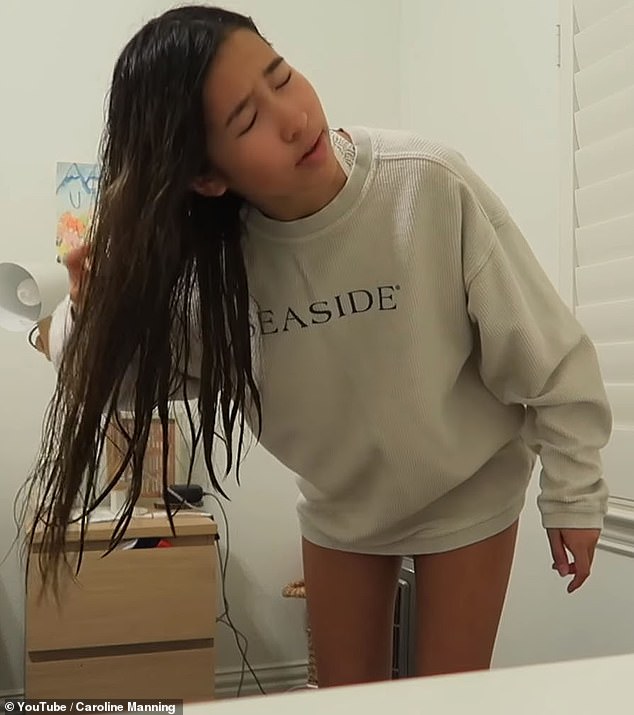 Getting ready: The Texas-based vlogger and singer was kept busy doing hair masks and recording a video all before 7 AM 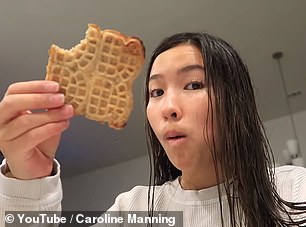 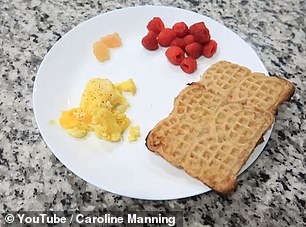 Breakfast: While the 15-year-old was getting ready, her mom made her a meal including cinnamon waffles 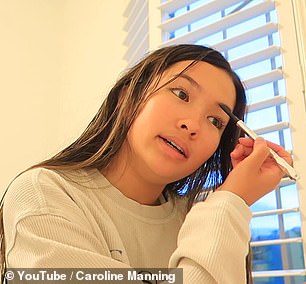 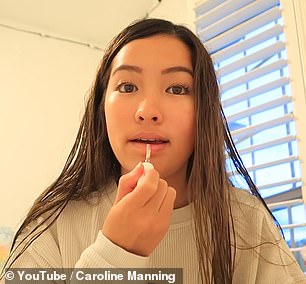 ‘If I’m going to wake up at 4:35 I need to be getting full hours,’ she shared. ‘It has been so nice, when I wake up I don’t check social media or anything.’

She added: ‘Working out every morning has me dead. My thighs hurt so bad but it’s worth it because in the long run, Imma be thicc and healthy.’

Commenters weighed in with thoughts about Caroline’s early AM call time.

‘I can’t be the only one who is like: I’m gonna do this too and try to wake up early. But then I wake up and I’m like screw this,’ said another.

‘The fact that she [wasn’t] the only one at the gym at 5 am,’ added one female user.

‘Girl be brushing her teeth twice before I even fall asleep,’ one person said, while another added: ‘She experiences a whole day, before I’m even able to stand up.’ 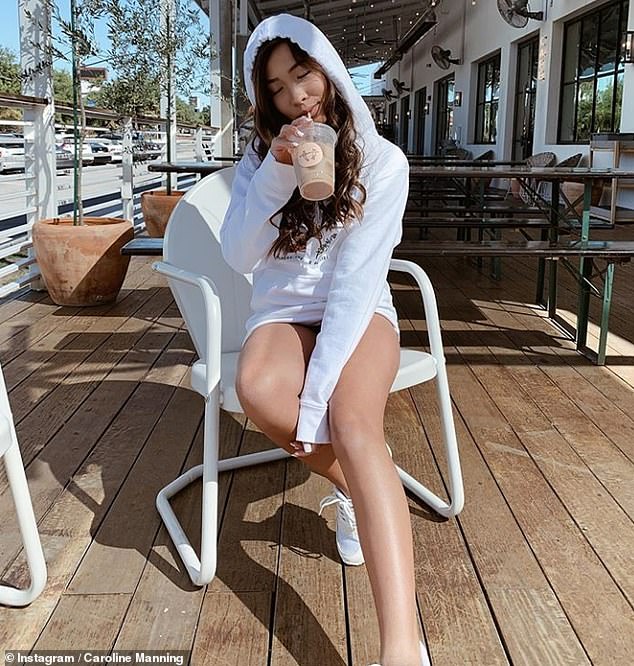 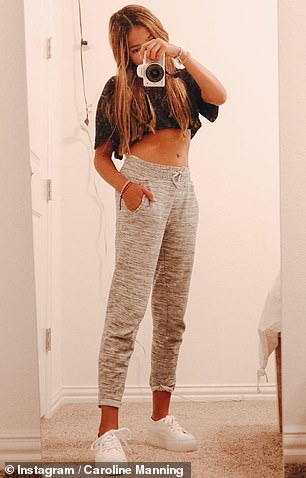 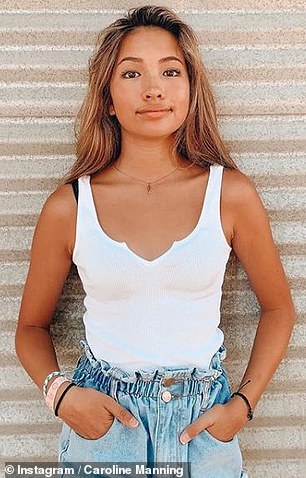 Early bird: Caroline revealed in another YouTube video that she tries to make sure she is in bed by 7:45 PM every night so she can get a full eight hours of sleep

A number of people compared their own morning activities to Caroline’s, noting that she makes them feel guilty about their own, more relaxed routines.

‘Imagine not waking up 15 minutes before you have to leave for school,’ one person joked.

But not everyone was down with the pre-dawn routine.

One woman wrote: ‘Just an announcement, if you’re in high school, really it’s not necessary to wake up before dawn to exercise.

‘Just get your rest go to school and do some activity or sport after school or even work, but really don’t stress yourself out to wake up so early when you’re still in high school and it’s not really necessary, just stay active throughout the day.’

Baffled: Social media commenters couldn’t fathom the idea of getting up at 4:35 AM to work out before school