More than 40 million new claims for unemployment benefits have been filed in the past two months when the coronavirus started paralyzing the US economy.

It is the 10th straight week that new claims have been above 2 million, figures released by the Labor Department on Thursday show.

While claims have declined steadily since hitting a record 6.867 million in late March, they have not registered below 2 million since then.

The weekly jobless claims report, the most timely data on the economy’s health, is being watched to assess how quickly the economy rebounds after businesses shuttered in mid-March to control the spread of COVID-19 and almost ground the country to a halt.

The unemployment toll caused by COVID-19 layoffs continues to rise with another 2.1 million American filing new jobless benefit claims last week. It is the 10th straight week that new claims have been above 2 million, figures released by the Labor Department on Thursday show 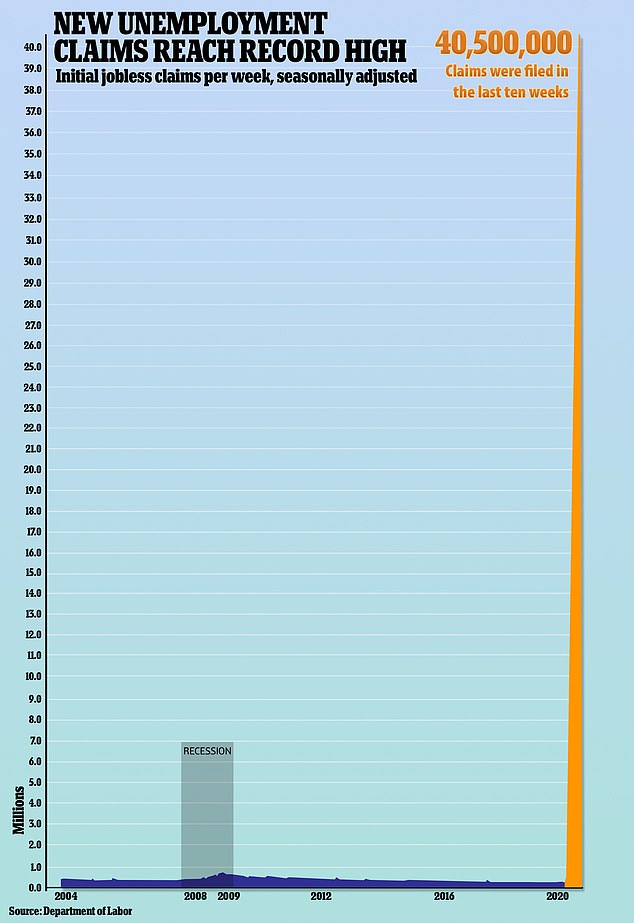 The number of claims – stuck at an astonishingly high level even as non-essential businesses are starting to reopen – suggest it could take a while for the economy to dig out of the coronavirus-induced slump despite signs from the housing market and manufacturing that the downturn was close to bottoming.

Economists fear a second wave of private sector layoffs and job cuts by state and local governments whose budgets have been crushed contributed to last week’s unemployment claims.

‘I am concerned that we are seeing a second round of private sector layoffs that, coupled with a rising number of public sector cut backs is driving up the number of people unemployed,’ said Joel Naroff, chief economist at Naroff Economics in Holland, Pennsylvania.

‘If that is the case, given the pace of reopening, we could be in for an extended period of extraordinary high unemployment. And that means the recovery will be slower and will take a lot longer.’

The second wave of layoffs could grow bigger with Boeing announcing on Wednesday it was eliminating more than 12,000 US jobs and also disclosing it planned ‘several thousand remaining layoffs’ in the next few months.

California, Washington, New York and Florida saw the biggest increases in new claims, according to the latest Labor Department report.

In California, where claims increased by 31,764, layoffs were most prominent in the service industry.

Layoffs in insurance, educational services and public administration industries were most common in Washington state where claims rose by 29,288.

The majority of layoffs in New York, which saw its claims increase by 24,543, were felt in the transportation and warehousing, educational services, and information industries.

The job cuts reflect an economy that was seized by the worst downturn since the Great Depression after the virus forced the widespread shutdown of businesses.

The economy is thought to be shrinking in the April-June quarter at an annual rate approaching 40 percent. That would be, by far, the worst quarterly contraction on record.

Economists cautioned the 40 million figure does not represent the number of jobs lost due to the pandemic, citing technical difficulties and procedures at state unemployment offices.

The focus, instead, should be on the number of people still receiving unemployment benefits. These so-called continuing claims could shed light on the effectiveness of the government’s Paycheck Protection Program.

The PPP, part of a historic fiscal package worth nearly $3 trillion, offered businesses loans that could be partially forgiven if they were used for employee salaries.

Continuing claims, which are reported with a one-week lag, likely increased to a record 25.750 million in the week ending May 16 from 25.073 million in the prior week, according to the Reuters survey. This data will cover the period during which the government surveyed households for May’s unemployment rate.

Based on the forecast, continuing claims increased roughly by 7.7 million between the April and May survey periods, suggesting a surge in the unemployment rate from last month’s post-World War Two record of 14.7 percent.

‘Now is a good time to think how many of those people who lost their jobs are going to get them back, my sense is 25 percent will not and that’s what gives us the double digit unemployment rate well into 2021,’ said Joe Brusuelas, chief economist at RSM in New York.

‘The bankruptcies of small and medium enterprises will result in a much higher rate of permanent layoffs.’