200 lobsters, American wine and cheese: all the details on Bidens’ state dinner for France

Two hundred live lobsters arrived at the White House on Tuesday. Tomorrow night they will be dinner.

The crustaceans from Maine will be the main course in Thursday’s state dinner, which is starring some of the best cuisine America has to offer, including three-award winning cheeses and wines from Napa Valley.

Yes President Emmanuel Macron of France will be toasted with sparking wine (not champagne – which is only from the Champagne region of France) when President Joe Biden hosts the first state dinner of his administration.

Macron began his trip with a undiplomatic shot at the American president. A reporter for Agence France-Presse heard the French president complain that Biden’s industrial subsidies are ‘super aggressive’ against French competitors.

‘This is super aggressive for our business people,’ he was heard telling members of Congress and business leaders at a lunch on Wednesday. He was referring to Biden’s Inflation Reduction Act, which will give billions to US-based manufacturers.

It may be one of the many issues Macron brings up on Thursday, when he arrives at the White House for his one-on-one meeting with Biden. The two leaders will also host a joint press conference before sitting down with their spouses to clink glasses to the Franco-American relationship. 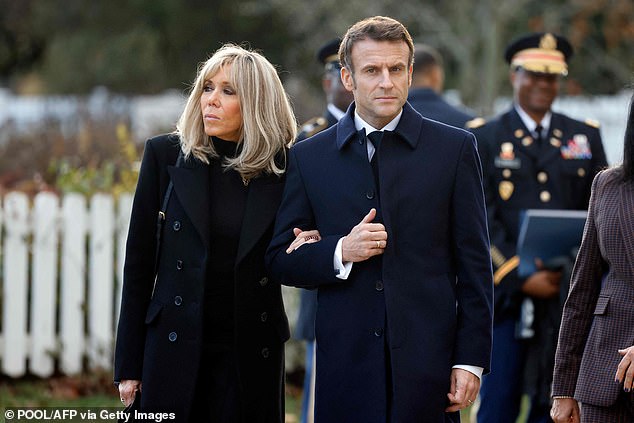 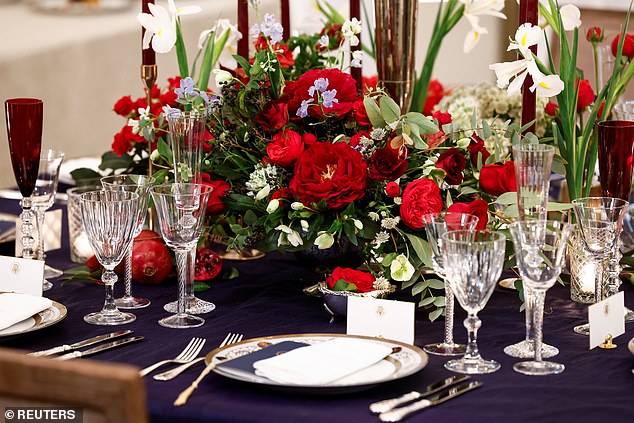 The table settings are a nod to the colors in the French and American flags – red, white and blue 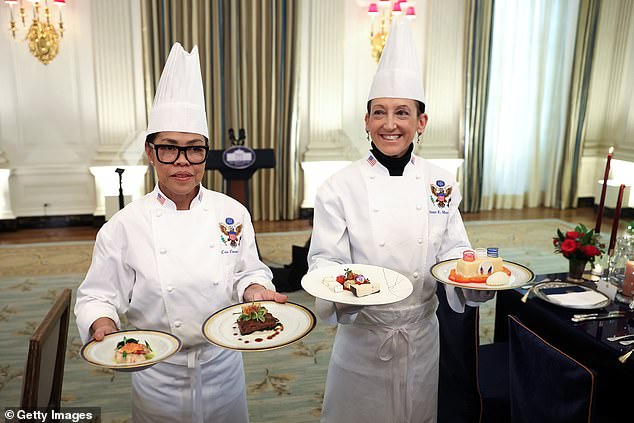 After the day’s work comes the night’s glamour.

More than 300 guests in sweeping gowns and tuxedos will descend upon the White House for an evening of music, toasts and amore.

Guests will walk through a snow-covered forest in the White House’s East Wing, which is decorated for Christmas, and gather under a glass pavilion on the South Lawn for the dinner.

Chandeliers that will hang above them; candles will light the night sky; and images fleurs de lis, stained-glass roses and irises will be flashed on the pavilion walls.

It will be heated too.

‘The design of this dinner was inspired by the shared colors of our flags – red, white, and blue – and our common values: liberty and democracy, equality and fellowship. These form the bedrock upon which our enduring friendship was built,’ she said.

The White House staff had outside help from Fête, an event planning and design production firm out of New York led by founder Jung Lee.

At the sit-down dinner, the tables will be covered in blue table clothes. Arrangements of red and white flowers, sprinkled with red candles, will form the centerpieces.

The flower arrangements feature France’s national flower, the iris, and American Beauty roses. There will also be piano roses to honor President Macron’s love of the piano.

The gold and white plates that guests will dine off of are rented. Typically state dinners use official White House china from one of the previous administrations but those place settings are not allowed outside the White House. Because the dinner is taking place out on the South Lawn, the china settings can’t be used.

In addition to the lobster, caviar, triple cooked butter potatoes, beef and squash raviolo are on the menu.

American wine is being served – all picked by the first lady.

‘We want to honor everything that is beautifully American,’ she noted.

‘The first thing that we consider is the season and next thing is the preferences of the guests because we want to honor the things that they like,’ she said. ‘Everything is very well thought of and very thoughtfully made, and it so happens that the White House garden had the squashes ready for us so what you see in the raviolo came from the garden.’

‘Then, in the very front, we’ve placed the flags of the United States and France on the outer part of the cake,’ she said as she displayed her work.

The Statue of Liberty will be the backdrop for the President Biden’s toast and is featured in the menu programs, which have navy covers with the gold seal of the United States.

A graphic rendering of the Statue of Liberty is on translucent paper on the first and last pages of the menu.

The statue was a gift from the people of France.

‘This State Dinner will not only reflect the shared colors, history, and values of the United States and France, it also shows the warmth and heart of our First Lady and this White House,’ said Elizondo.

Guests will be feted by Grammy-winner musician Jon Batiste, accompanied by his father, Michael Batiste, and ‘The President’s Own’ United States Marine Band, and the Army and Air Force Strolling Strings.

Batiste is a New Orleans native. The Macrons will visit that city on Friday for several cultural programs. 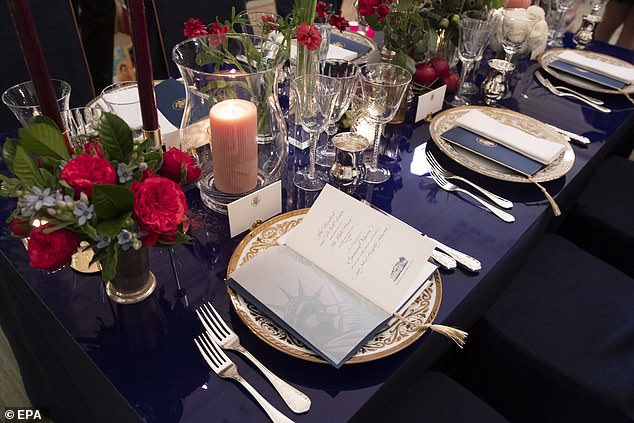 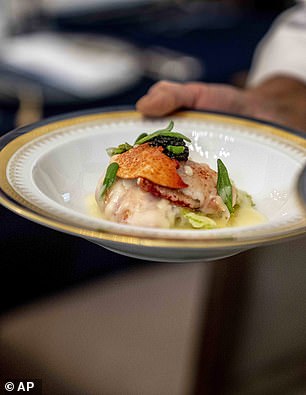 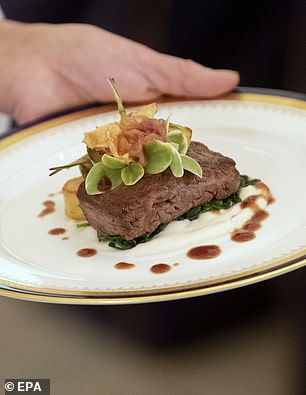 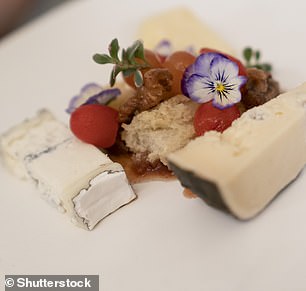 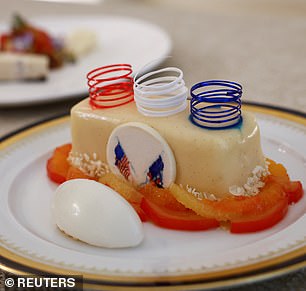 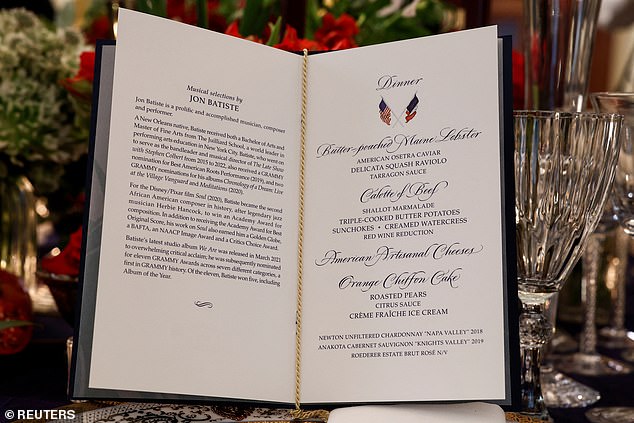 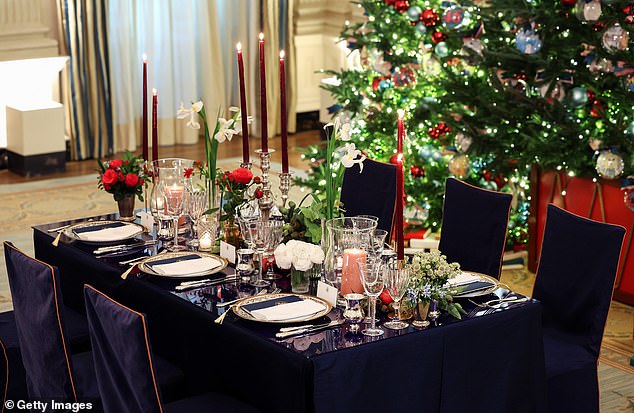 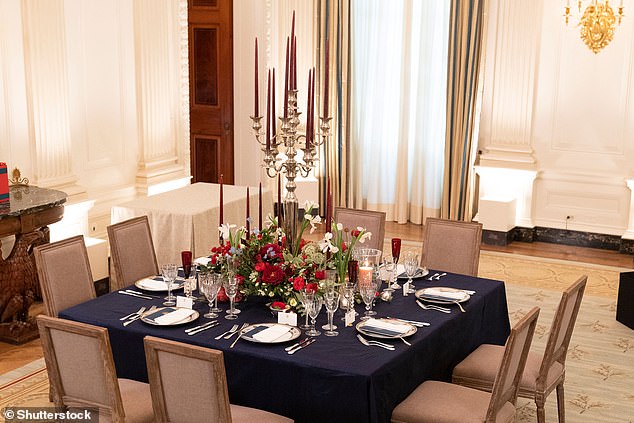 The guest list practically a state secret but is expected to be released the night of the dinner.

It is the hottest ticket in town as lawmakers, Democratic donors and longtime friends of the Bidens want to attend.

Elizondo said many parts of the government were involved in deciding who got the coveted invitation.

‘Many offices have been involved in and, you know, we’re trying to sort of bring in all the many supporters and, and friends of the President, the First Lady for their first state dinner,’ he said.

The cost of the dinner hasn’t been announced. It’s paid for by the State Department since it’s an official state occasion.

But an event like a state visit involves many stake-holders, including the White House, State Department, protocol office, and the military.

The Bidens’ first state dinner is happening nearly two years into his term – by comparison Barack Obama had six at this point of his. But the COVID pandemic delayed the normal pageantry that comes with a visit by a foreign leader.

Biden and Macron’s relationship got off to a rocky start. At one point, Macron briefly recalled France’s ambassador to the United States  after the White House announced a deal to sell nuclear submarines to Australia, undermining a French contract.

But the relationship has mended and Macron has been one of Biden’s staunchest allies in the response to Russia’s invasion of the Ukraine. 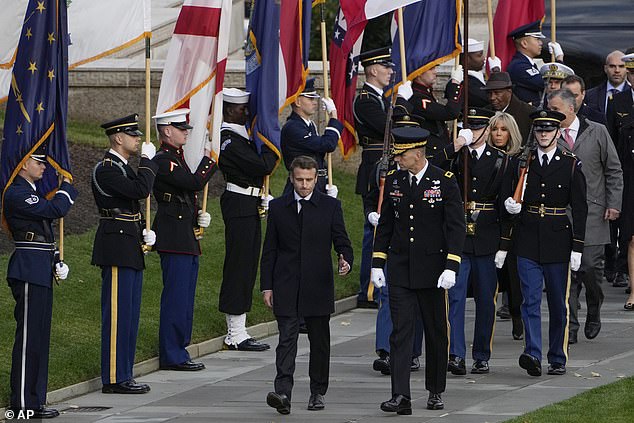 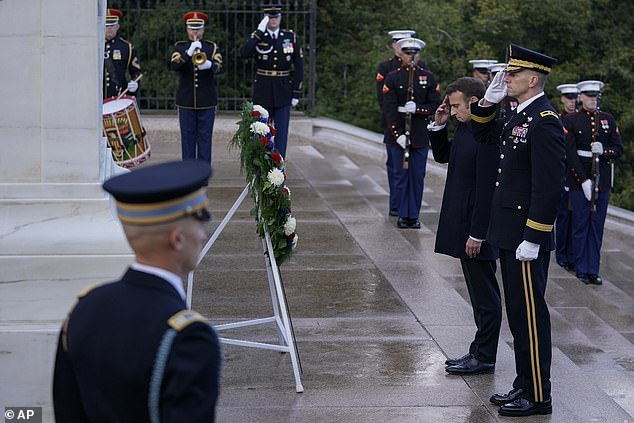 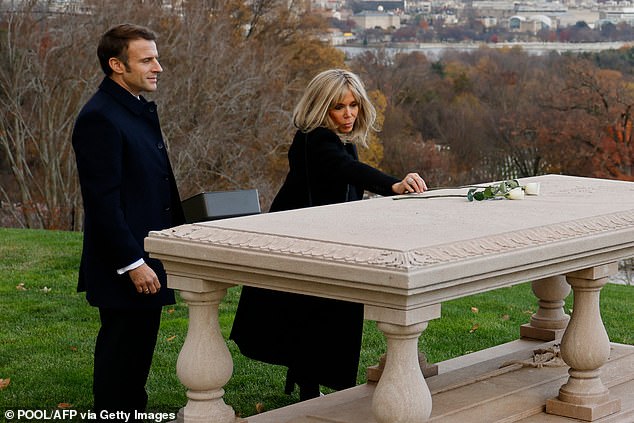 Ukraine will top the agenda when the two men meet in the Oval Office on Thursday. Their conversation also is expected to include discussion of Iran’s nuclear program and China’s increasing aggressiveness.

And, of course, Macron is expected to bring up his case against American subsidies.

Macron earlier this month said the subsidies could upend the ‘level playing field’ on trade with the EU.

The French president and his wife arrived Tuesday night. Macron visited NASA headquarters with Vice President Kamala Harris on Wednesday. He and Brigitte Macron also visited Arlington National Cemetery, where he laid a wreath at the Tomb of the Unknown Soldier.

White House spokesman John Kirby said President Biden chose France for his first state visit because it’s a testament to his foreign policy philosophy – that the United States’ strength is in its alliances.

‘Our alliance is something that no other nation in the world can match — the network of American alliances. France is our oldest one,’ he said at Monday’s White House press briefing.