Banquet frozen in time: 2,000-year-old tomb with a mural depicting a naked servant carrying a jug of wine at a feast is discovered in Italy

A painted tomb with a 2,000-year-old drawing of a banquet ‘frozen in time’ has been uncovered in Italy.

Archaeologists found the ornately-decorated burial site in Cumae, a ruined city in modern Italy which was among the first ancient Greek settlements in western Europe.

Researchers have been working at the site since 2001 but all the tombs they had found so far had been painted all red or white.

In June this year they found the more decorative tomb with the wall paintings, which appeared to have been raided during the 19th century.

A painted tomb with a 2,000-year-old drawing of a banquet has been uncovered in Italy where archaeologists found the ornately-decorated burial site in Cumae, a ruined ancient city

What was the settlement of Cumae?

Cumae is regarded as the first settlement started by the ancient Greeks in modern Italy.

It lies around 15 miles west of Naples, southern Italy.

Historians believe the city was first founded in the 8th century BC.

The ancient city of Cumae was twice the size of its more famous neighbour Pompeii, researchers said.

In archaeological digs since 2001 researchers have found hundreds of ancient sepulchres.

They recovered remains and traces of funerary furnishings, which archaeologists have used to date the tombs to the second century BC.

The people buried in the chamber – which now stands empty – must have had a ‘high social status’, experts believe.

A naked servant carrying a jug of wine and a vase is one of the most prominent drawings on the 2,000-year-old wall.

Much of the rest of the painting has faded away but it is believed that other guests at the banquet were depicted on the tomb’s remaining walls.

In a bid to preserve the fresco archaeologists removed it from the Italian site along with fragments on the ground.

They then re-assembled the décor ‘like a puzzle’, according to the the French National Centre for Scientific Research.

A statement from the centre said: ‘In addition to the excellent state of conservation of the remaining plaster and pigments, such a décor in a tomb built in that period is rare.

‘Its ‘unfashionable’ subject matter was in vogue one or two centuries earlier. This discovery is also an opportunity to trace artistic activity over time at the site.’

A Greek sanctuary, roads and a necropolis have previously been found in the area, around 15 miles west of Naples. 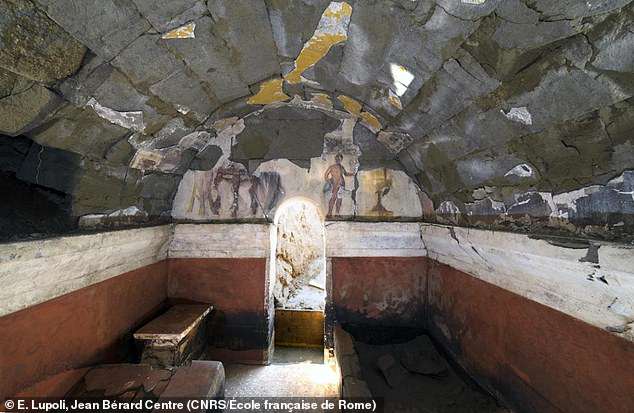 In June this year archaeologists found the decorative tomb with the wall paintings, which appeared to have been raided during the 19th century. They used funerary furnishings to date the tombs to the second century BC 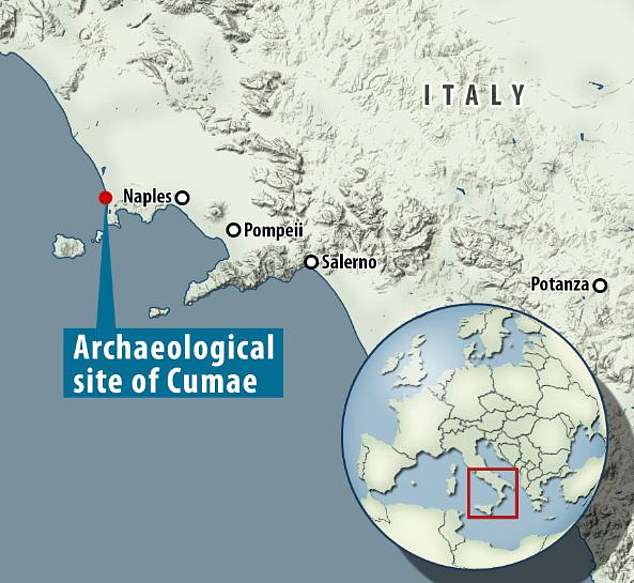