She performed with pal Selena Gomez in Los Angeles on Saturday for her latest stop on her Reputation World Tour.

And less than 24 hours later, Taylor Swift jetted to Las Vegas for the Billboard Music Awards at the MGM Grand Garden Arena.

The singer, who flashed her legs in a pale pink and silver textured gown, was joined on the carpet by the equally dazzling Jennifer Lopez and Ciara.

Star power: The singer was joined on the carpet by the equally dazzling Jennifer Lopez and Ciara

Actress Jenna Dewan debuted her shorter hair at this year’s awards show; the 37-year-old actress, who split with husband Channing Tatum in April paired her new look with a strapless leather and silver embellished mini dress.

Demi Lovato flashed her cleavage in a plunging cheetah printed dress with sky-high heels and slicked back tresses; the 25-year-old singer added large hoop earrings for a pop of sparkle

Chantel Jeffries chose a skintight see-through jumpsuit with a plunging neckline, revealing her cleavage and sideboob.

The 24-year-old DJ flaunted her pert derriere in the sheer ensemble, which had an intricate design. 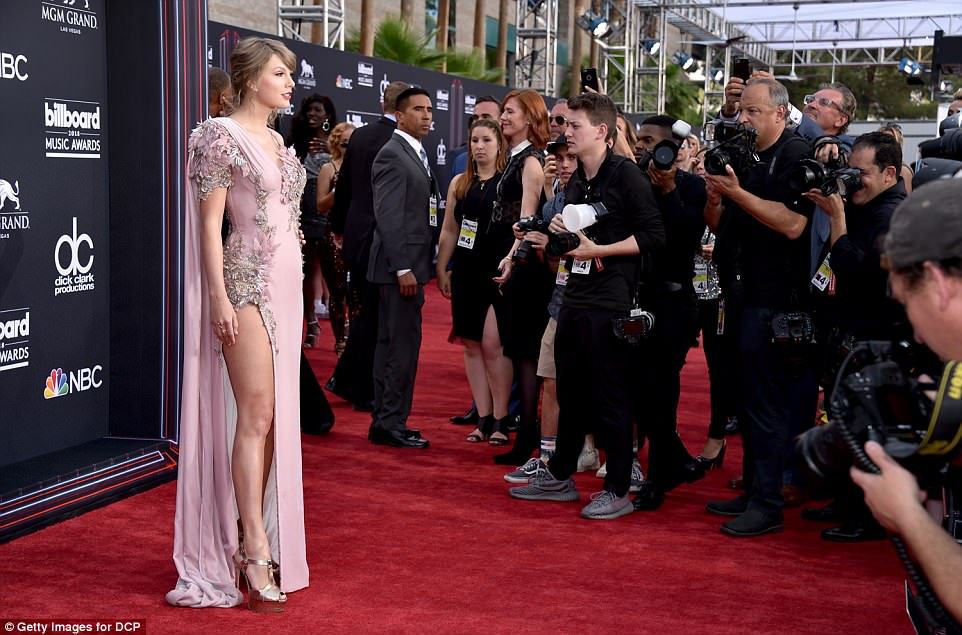 What a beauty: The 28-year-old songstress showed off her toned pins in the glamorous gown She looks incredible: Taylor wore her hair back while painting her pout a red hue Edgy: The 37-year-old actress, who split with husband Channing Tatum in April, flaunted her figure in a leather silver embellished mini dress with matching heels 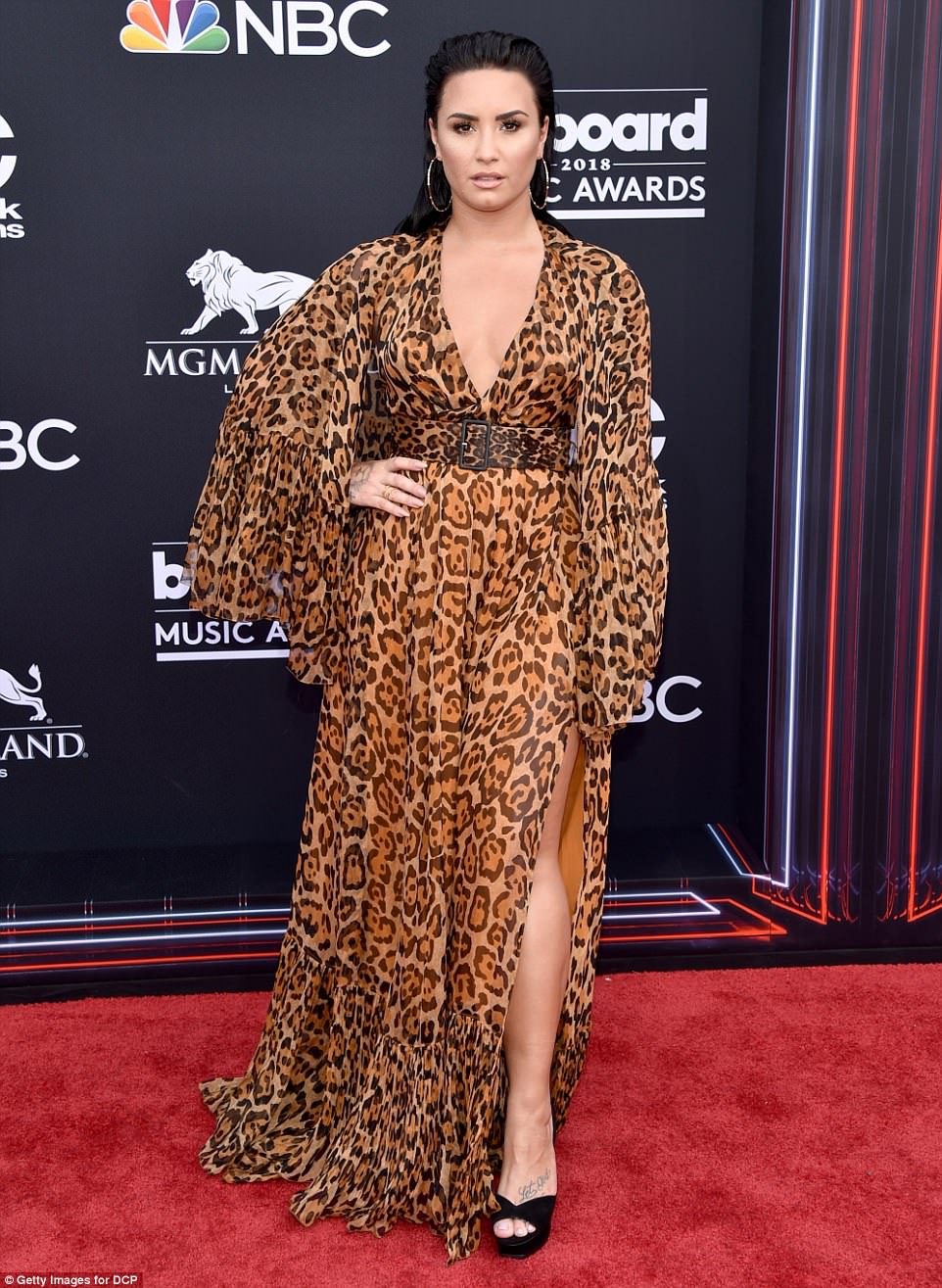 Pretty in pattern: Demi Lovato flashed her cleavage in a plunging cheetah printed dress with sky-high heels and slicked back tresses; the 25-year-old singer added large hoop earrings for a pop of sparkle

Fringe appeal: Kesha, 31, chose a nude and silver dress, adding a floral patterned shawl and cowboy boots; she finished off her look with a large hat and wavy treses

Bebe Rexha donned a velvet high-neck gown with a three-dimensional pleated lace detail along her sleeves and behind her neck; she wore her platinum locks in a top knot with gold and black smoky eye makeup.

Ed Sheeran, Kendrick Lamar and Bruno Mars lead the way in the nominations for the 2018 Billboard Music Awards on Sunday night, with each receiving 15 nods.

All three are up for Best Artist and will compete with Drake, who has nine nominations, and Taylor Swift, who has five.

British singer-songwriter Sheeran has also been nominated for Top Male Artist, Top Touring Artist and Top Hot 100 Artist. He faces stiff competition for all of these awards from Bruno Mars, who won in all six of his categories at the Grammy Awards in January. 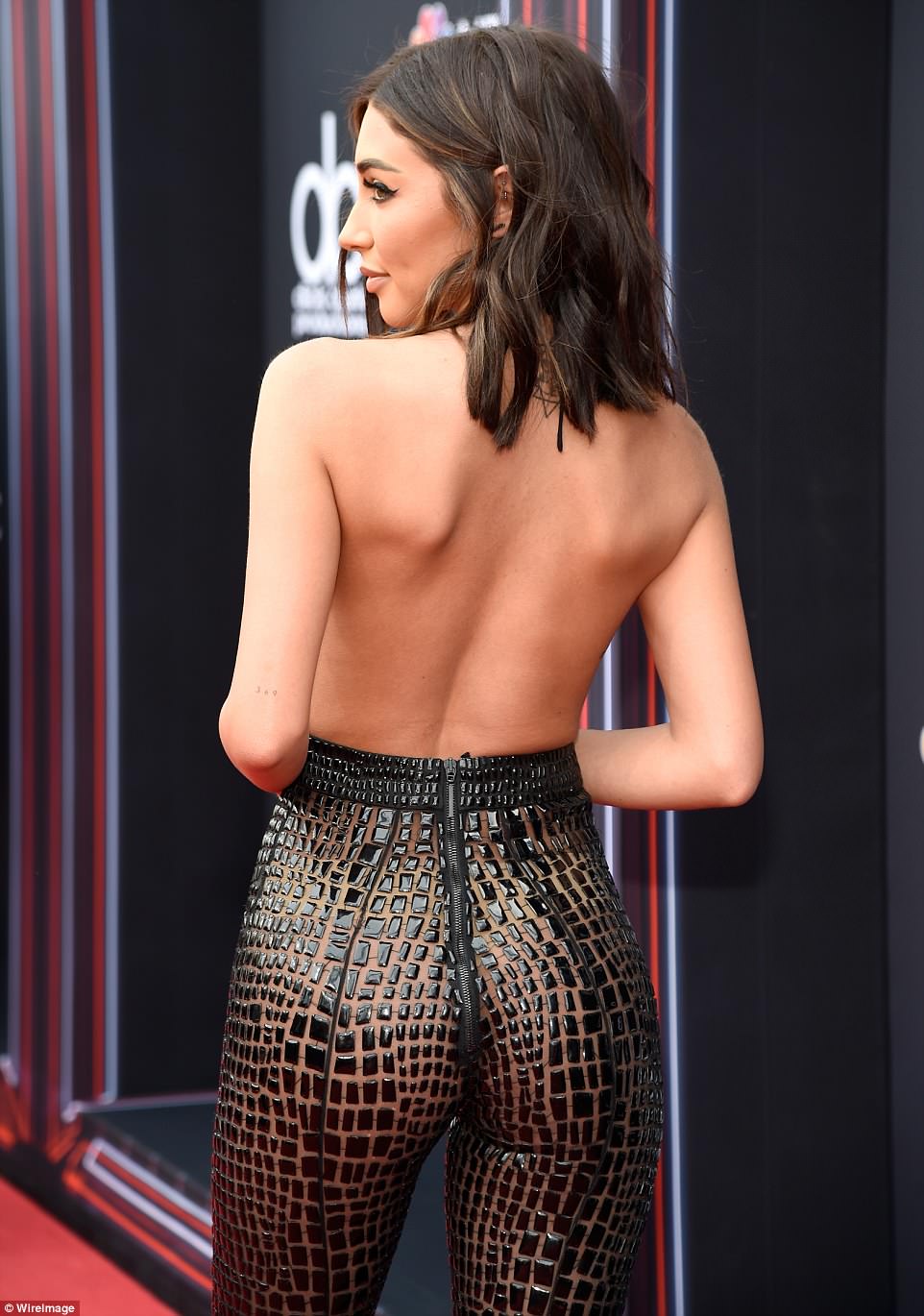 Not shy: The 24-year-old DJ flaunted her pert derriere in the sheer ensemble, which had an intricate design

Ready for her close up: Erika Jayne sported a black frock with bright satin blue heels 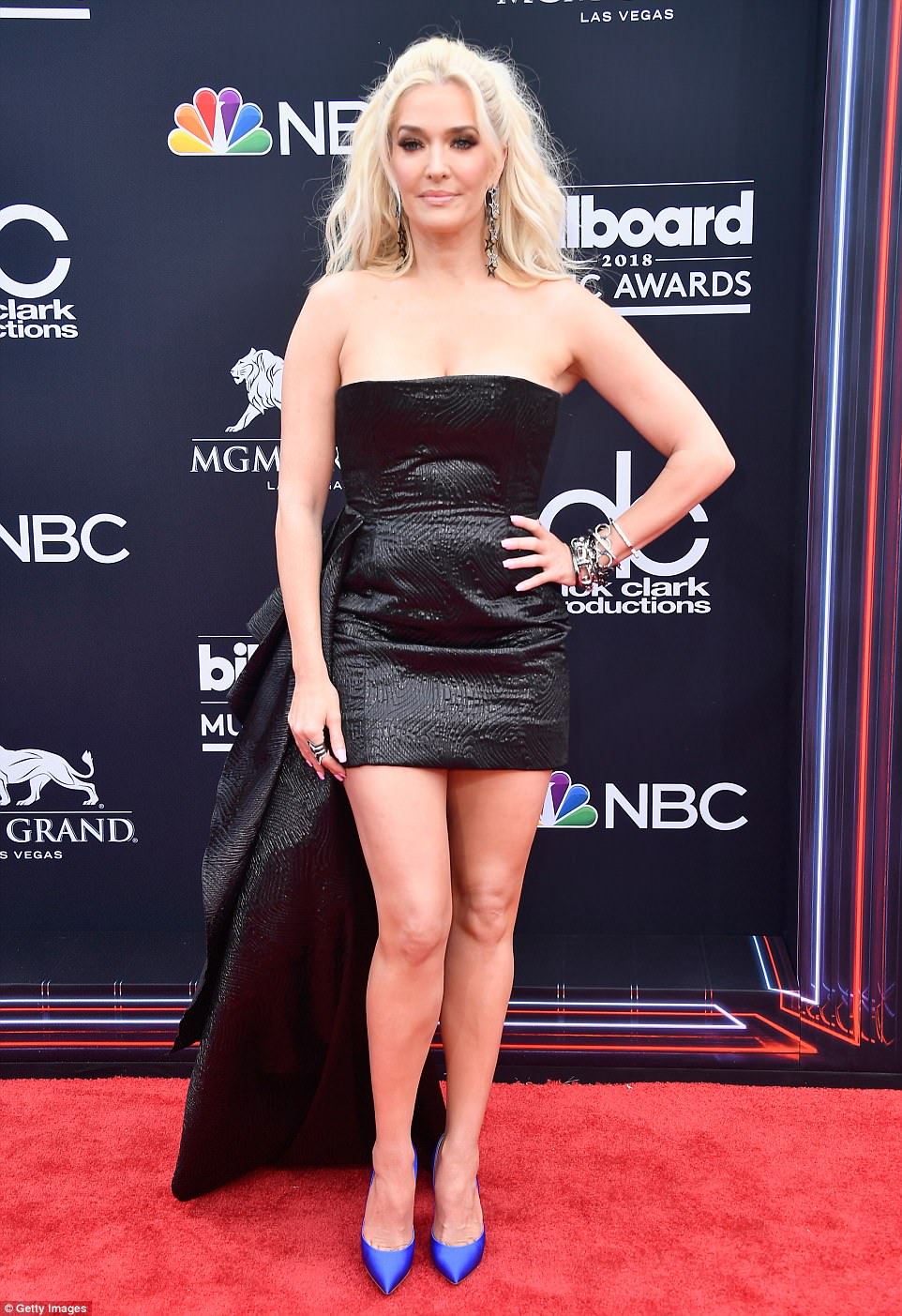 Effortless: The 46-year-old singer arrived to the annual show rocking a cleavage-revealing black gown, which also highlighted her toned legs 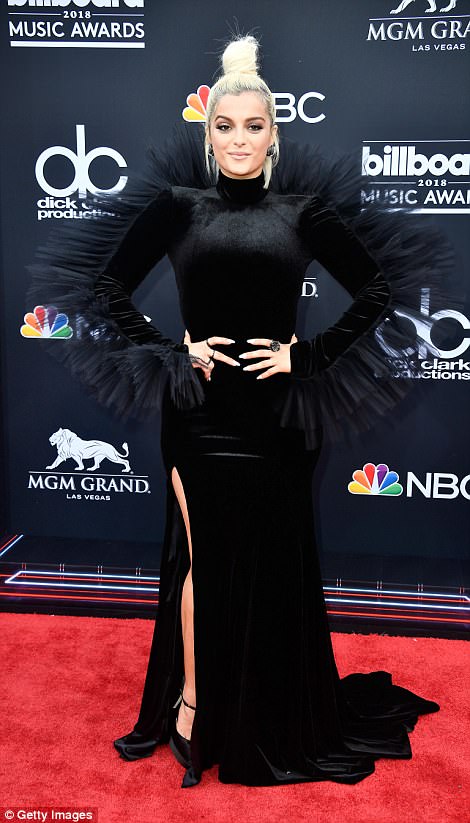 What a statement: Bebe Rexha (L) donned a velvet high-neck gown with a three-dimensional pleated lace detail along her sleeves and behind her neck; Tyra Banks (R) chose a similar dress – although it had a low-cut neckline with a shorter hemline 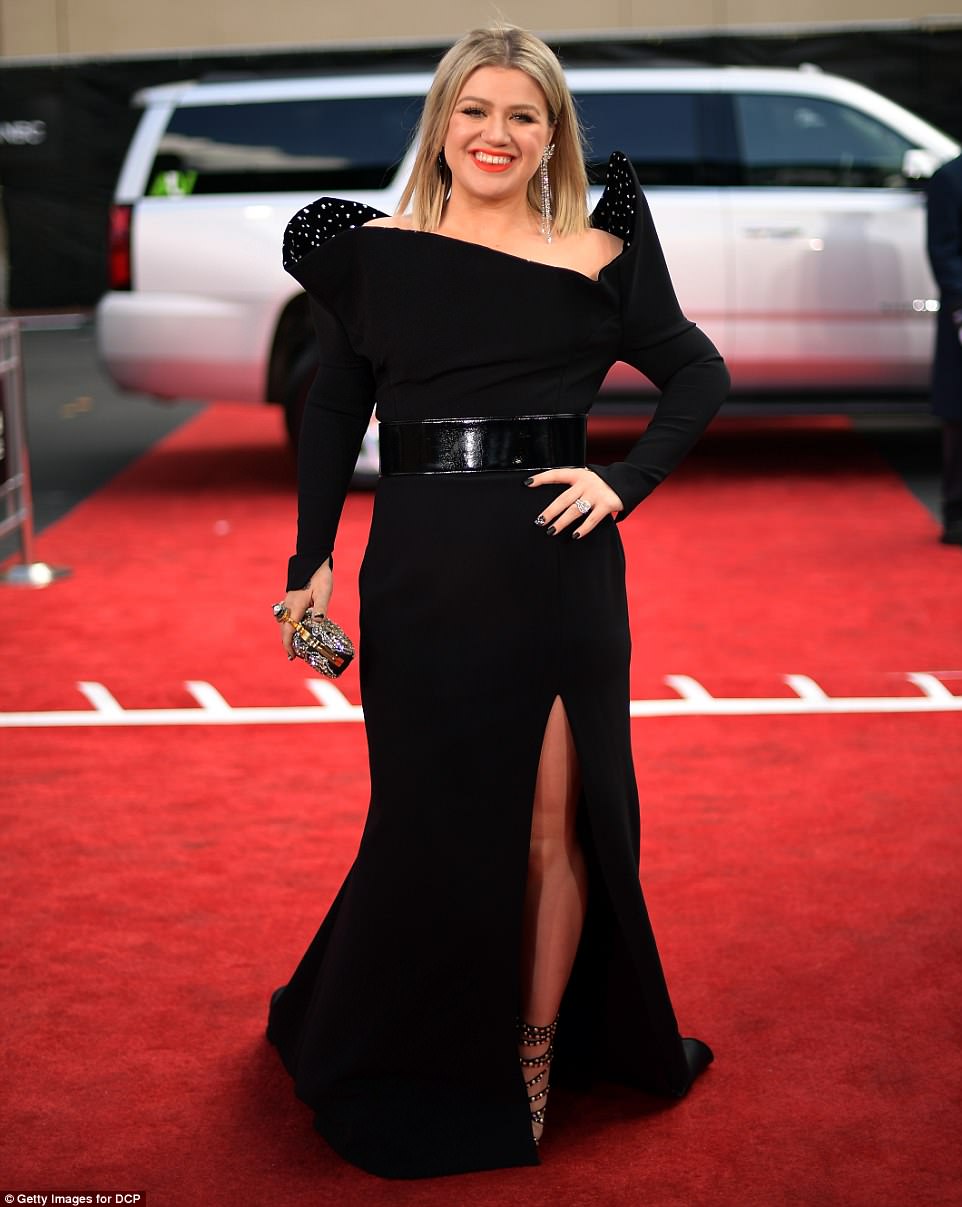 Christina Aguilera, who will release her latest album Liberation on June 8, chose a pinstriped frock with a long train and a matching belt; the look was styled slightly off her shoulders 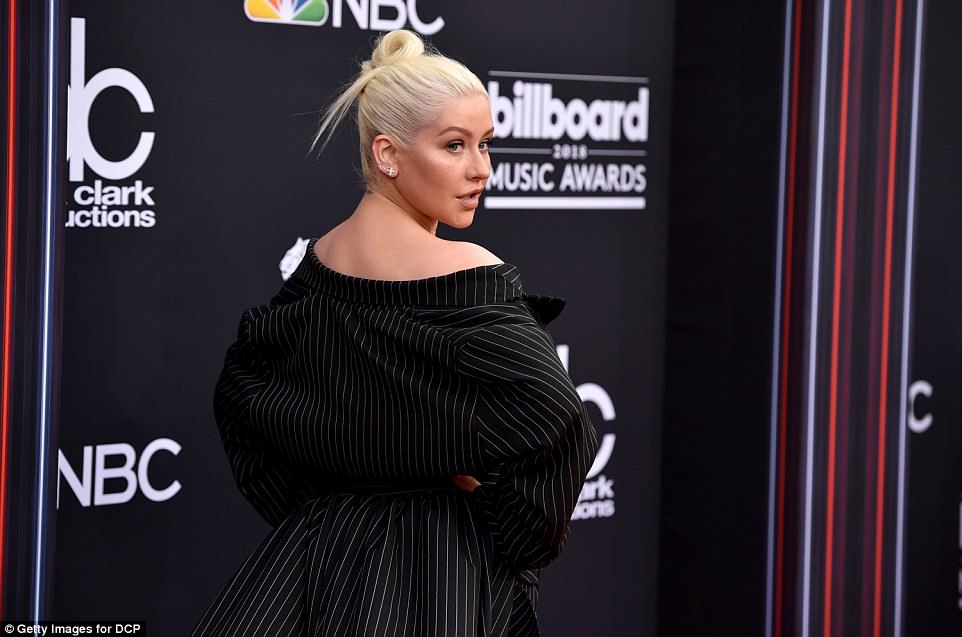 What an arrival: The singer, 37, styled her blonde hair in a bun, opting for minimal makeup 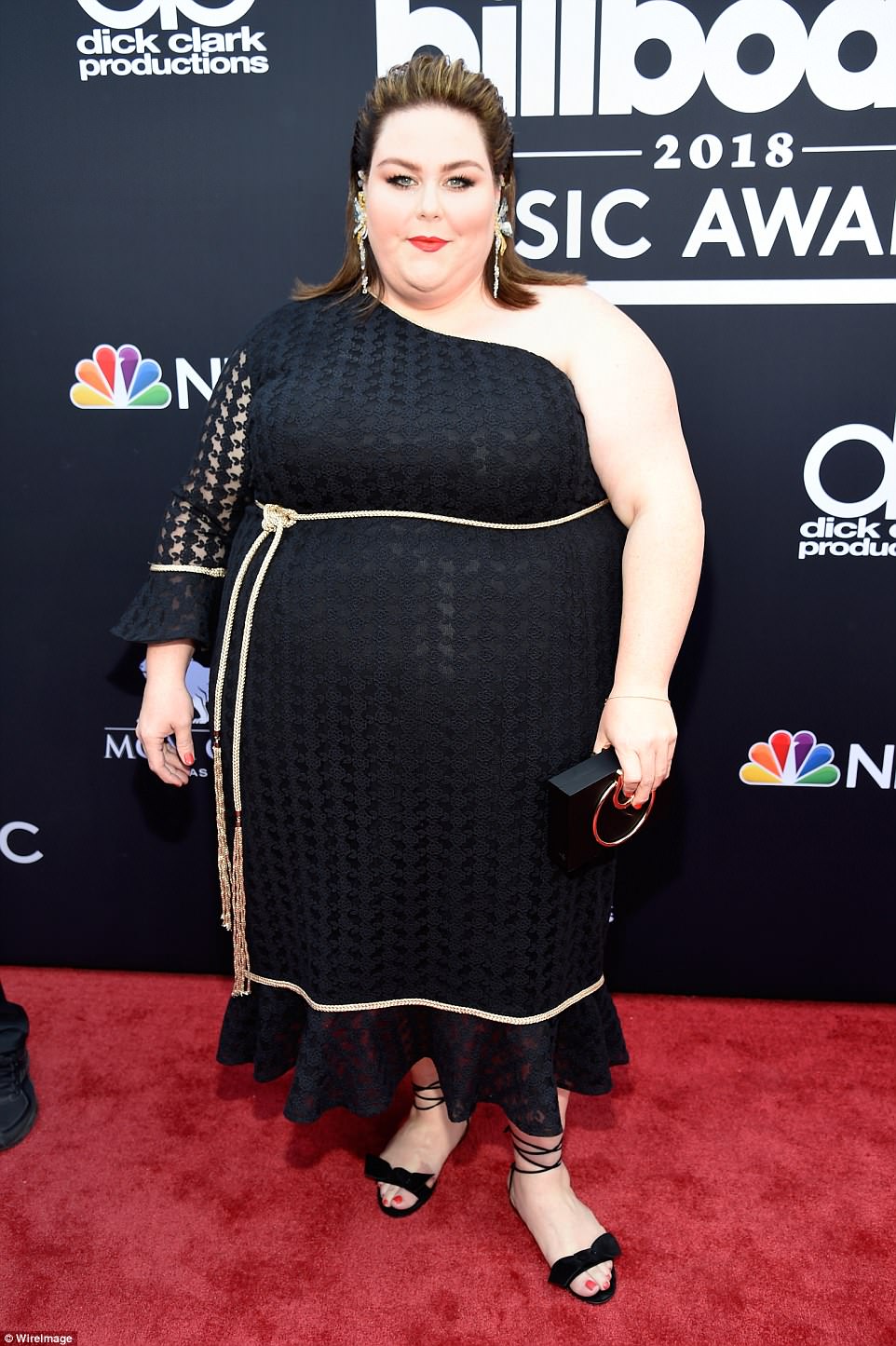 Sultry: This Is Us star Chrissy Metz chose a gold and black one-shoulder gown with red lipstick and matching nail polish

Fresh from becoming the first rapper to be awarded the Pulitzer Prize for Music for his album Damn, Kendrick Lamar’s fourth studio album is in the running for Top Selling Album, Top Rap Album and Top Billboard 200 Album.

Beyonce has been left off the list for Top Female Artist, which will be contested by Camila Cabello, Cardi B, Halsey, Demi Lovato and Swift. However, the Coachella headliner does face a showdown with SZA and Rihanna for Top R&B Artist.

Shades of purple: Singer Dua Lipa chose a ruched bow detailed frock while actress Alyson Stoner dobbed trousers and an open blazer with no top beneath

Bright: Maren Morris chose a red and pink dress with a heart shaped torso and an open back; she wore her ombre locks in waves

Elsewhere, Irish rock band U2’s live performances were rewarded with nods for Top Touring Artist and Top Rock Tour. They must overcome Guns N’ Roses, who have wowed crowds around the world with a reunited line-up of singer Axl Rose, guitarist Slash and bassist Duff McKagan.

As was previously announced, Janet Jackson will be presented with this year’s Icon Award. 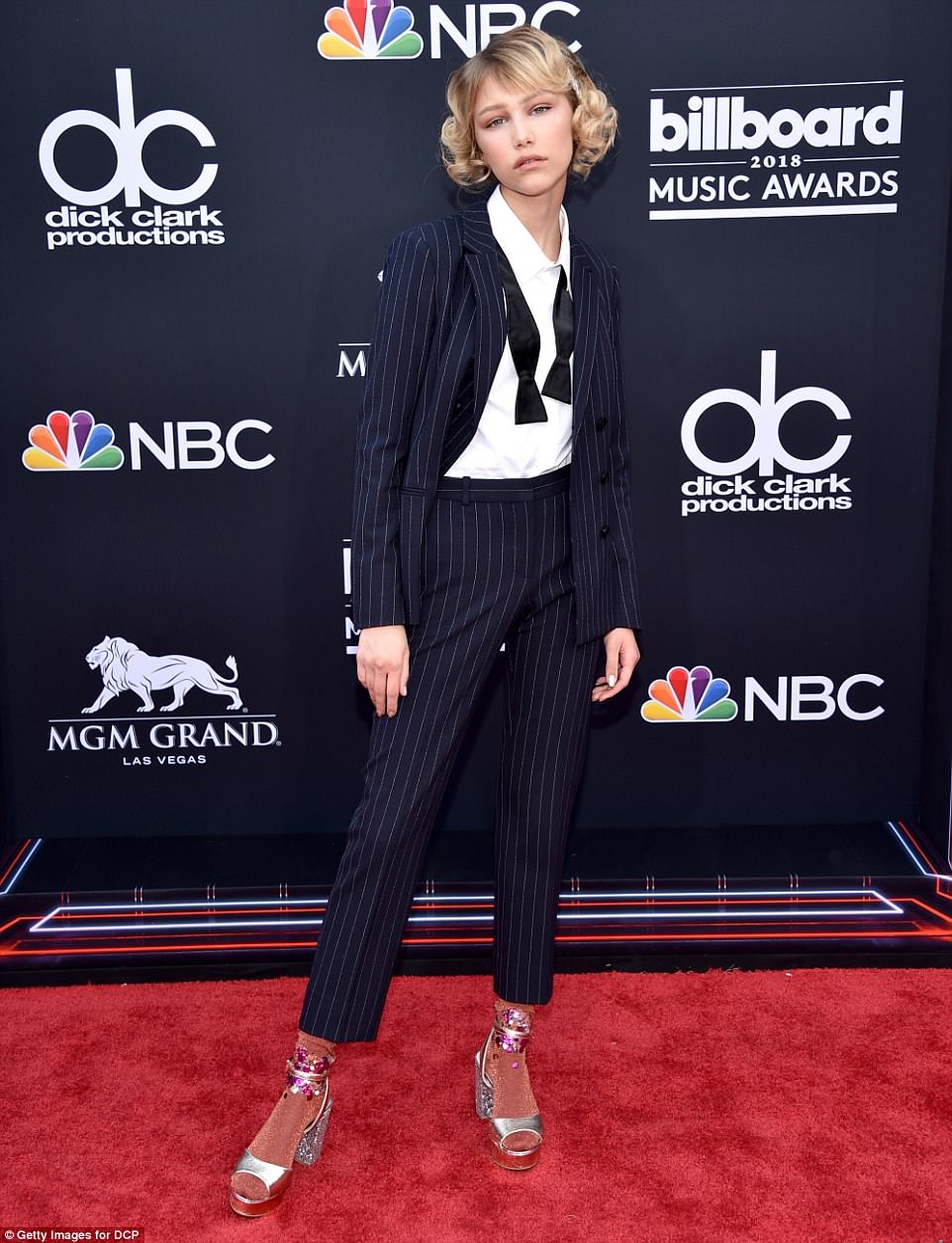 Elegant: Julia Michaels chose a pleated sheer look with a full skirt; the white colored frock was made of lace Quite an eyeful: Normani, who became a household name as part of Fifth Harmony, donned a sheer lace gown, which revealed her black underwear beneath 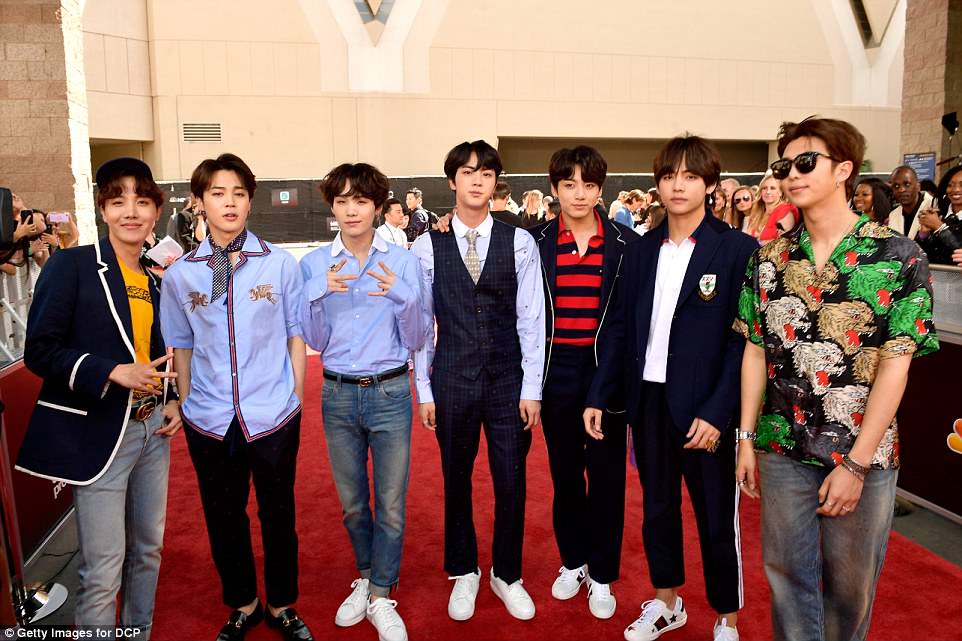 Pop stars: The hit South Korean boy band BTS was on hand as well; they are set to perform at this year’s Billboard awards 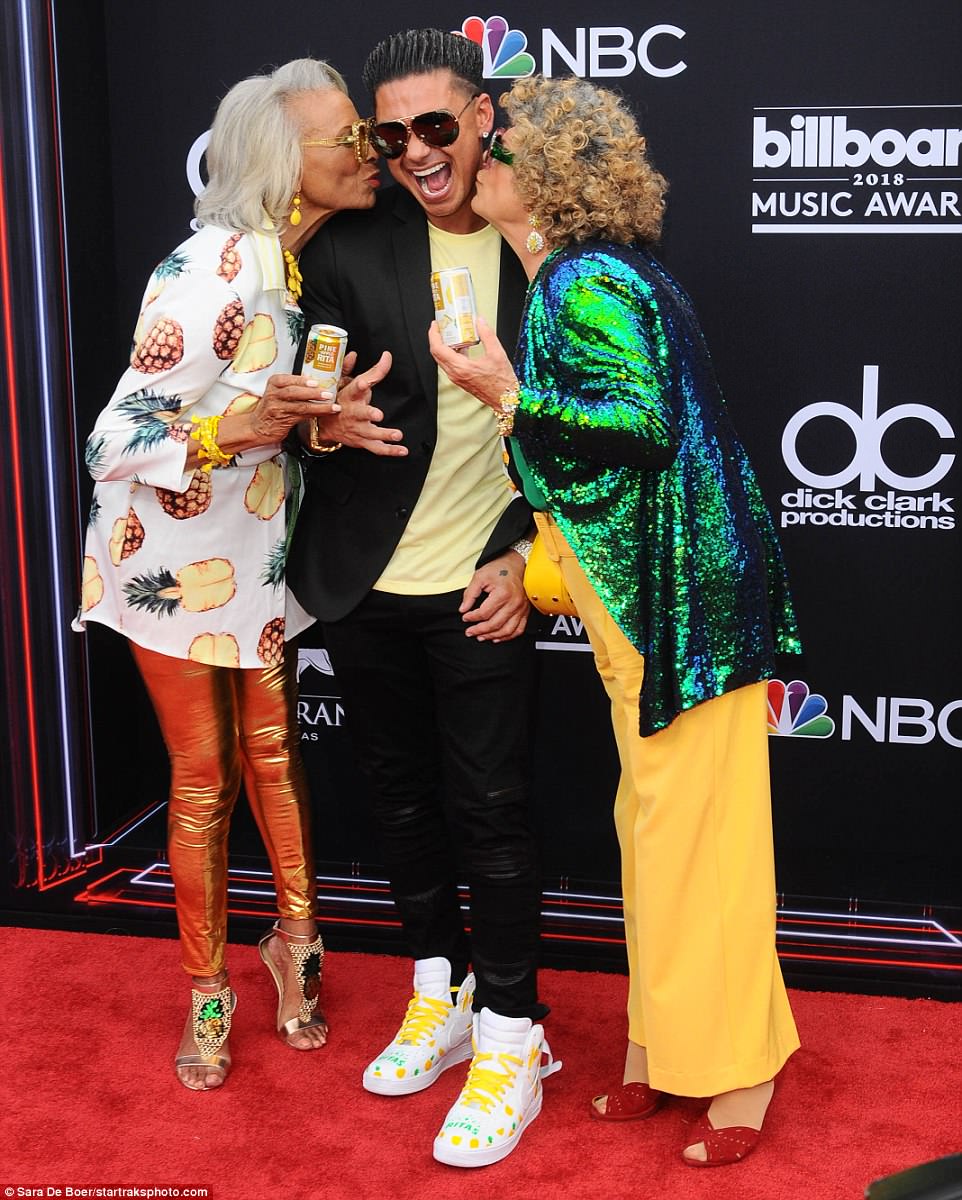 Interesting: Pauly D donned a bold look while posing with his coordinating guests Janet will join the likes of Neil Diamond, Stevie Wonder, Price, Jennifer Lopez, Celine Dion, and Cher as previous recipients of the honour.

The Nasty hitmaker will also sing at the bash for what will be her first televised performance in nine years.

Meanwhile Kelly Clarkson is hosting the night’s ceremony, and also performing during the show at the MGM Grand in Las Vegas.

Other performances include Demi Lovato’s duet with Christina Aguilera.

The Tell Me You Love Me singer and Beautiful hitmaker have confirmed they are to give their new single Fall In Line – which features on Christina’s new LP Liberation – its live debut. 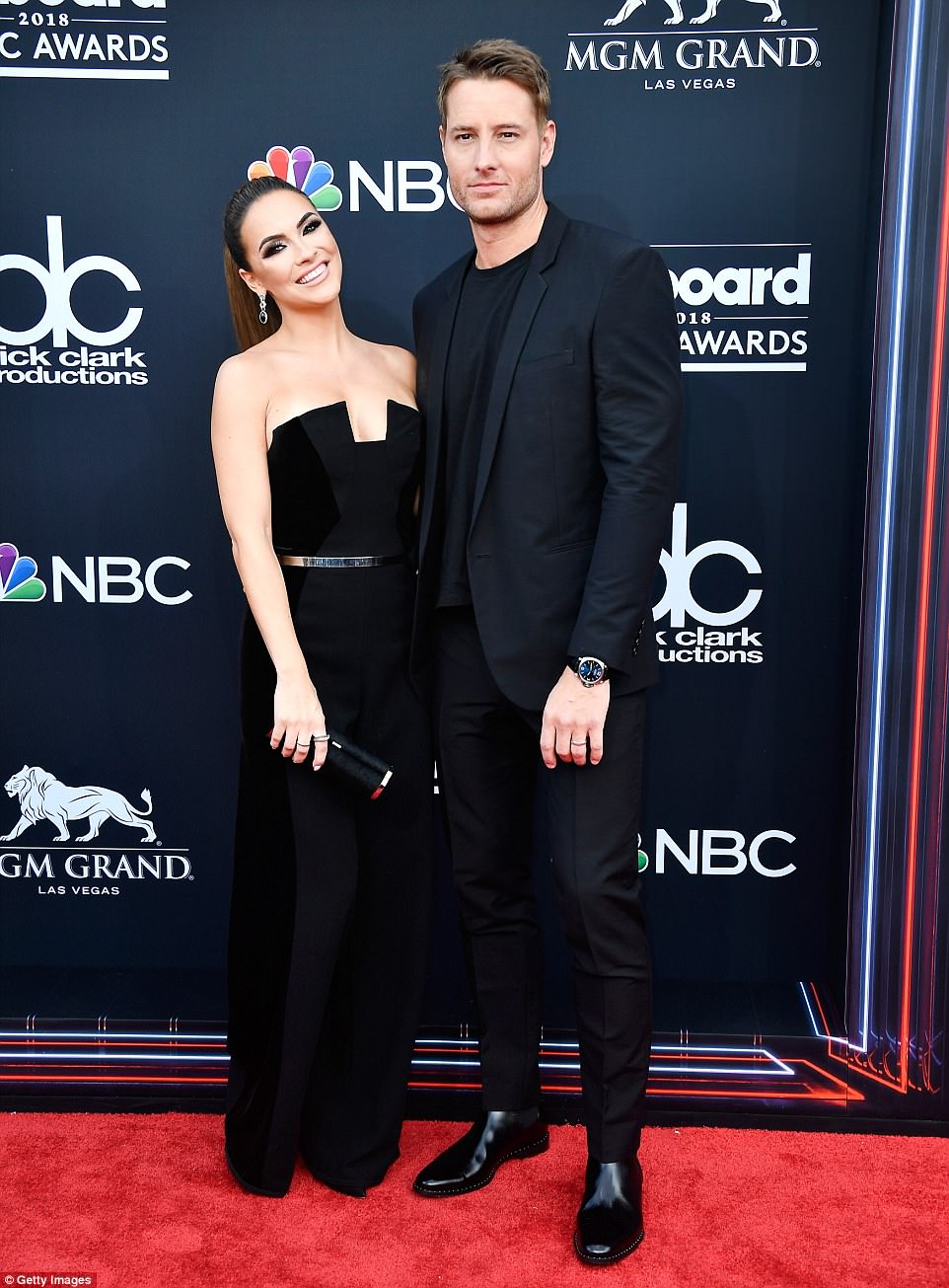 Coordinated: This Is Us actor Justin Hartley dressed in all black for the event, as did his gorgeous wife Chrishell; they tied the knot last fall 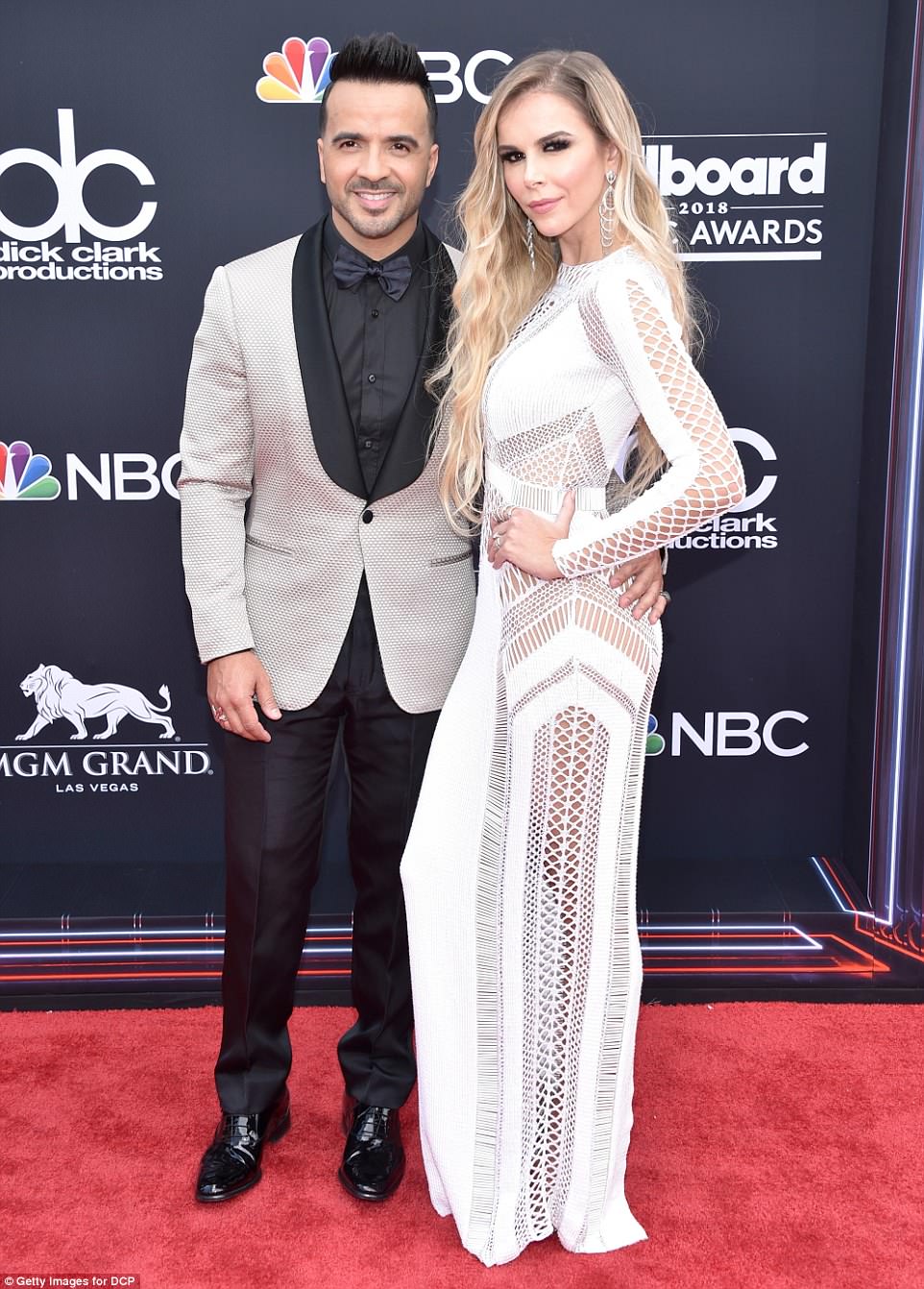 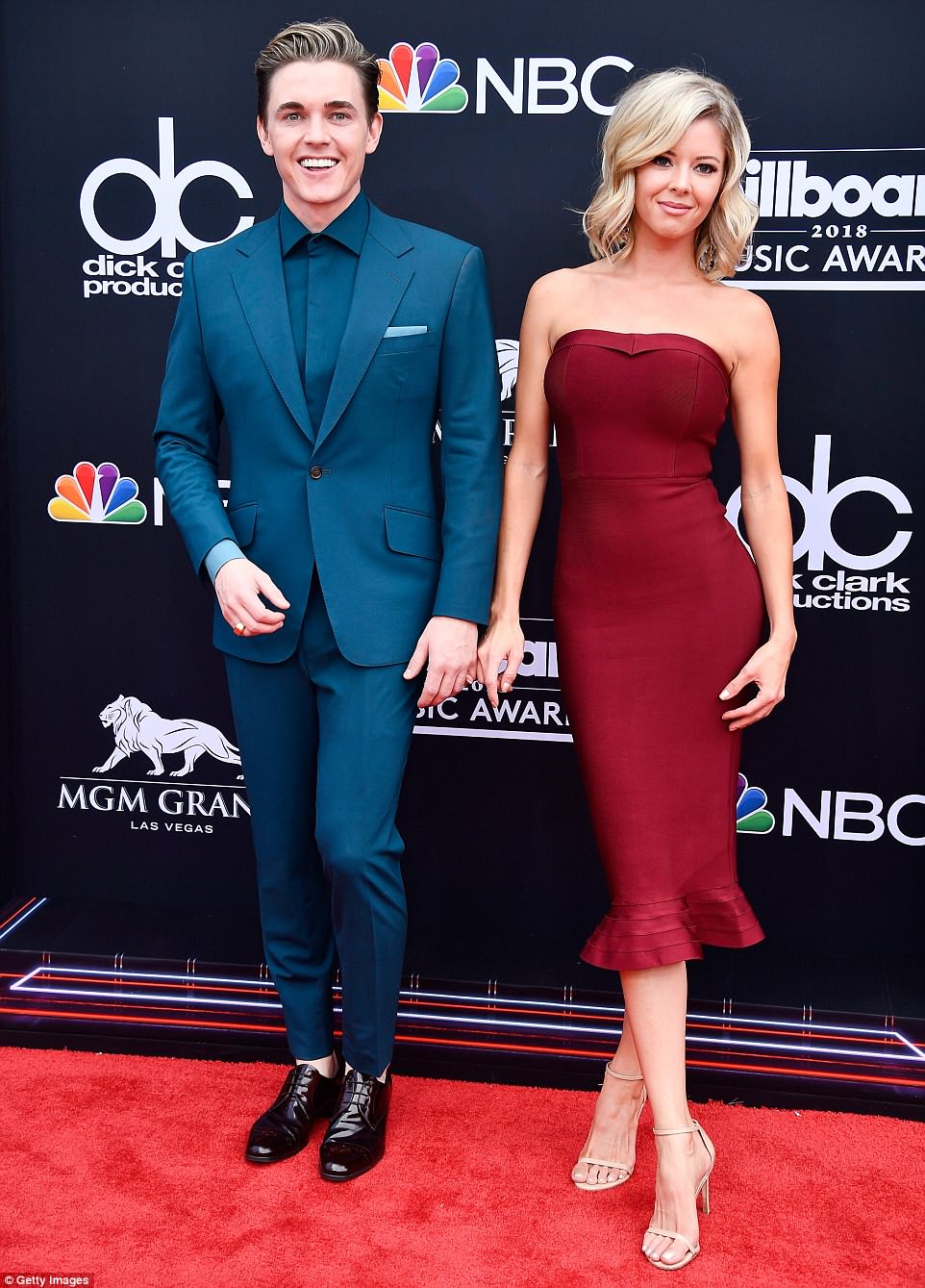 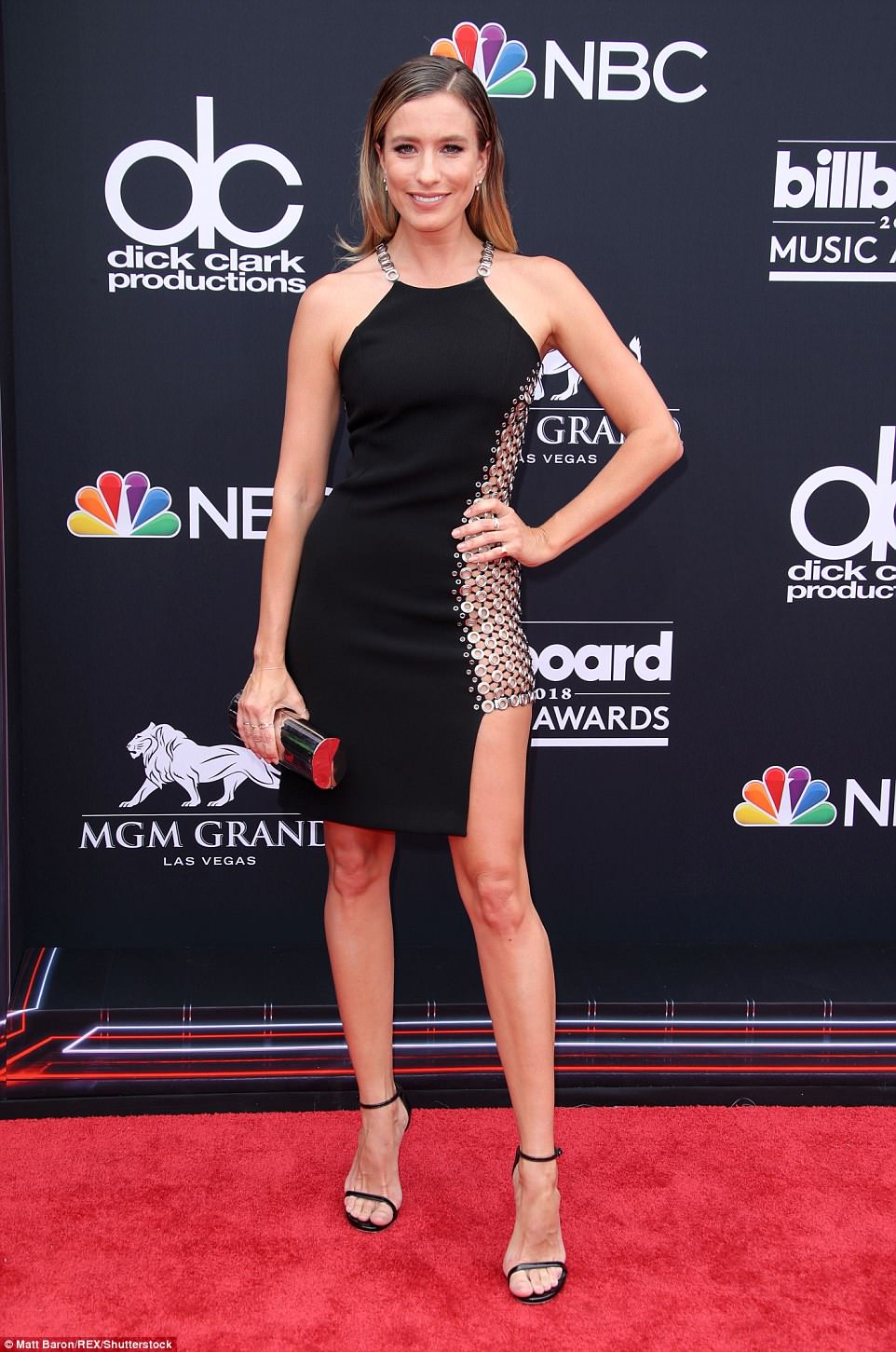 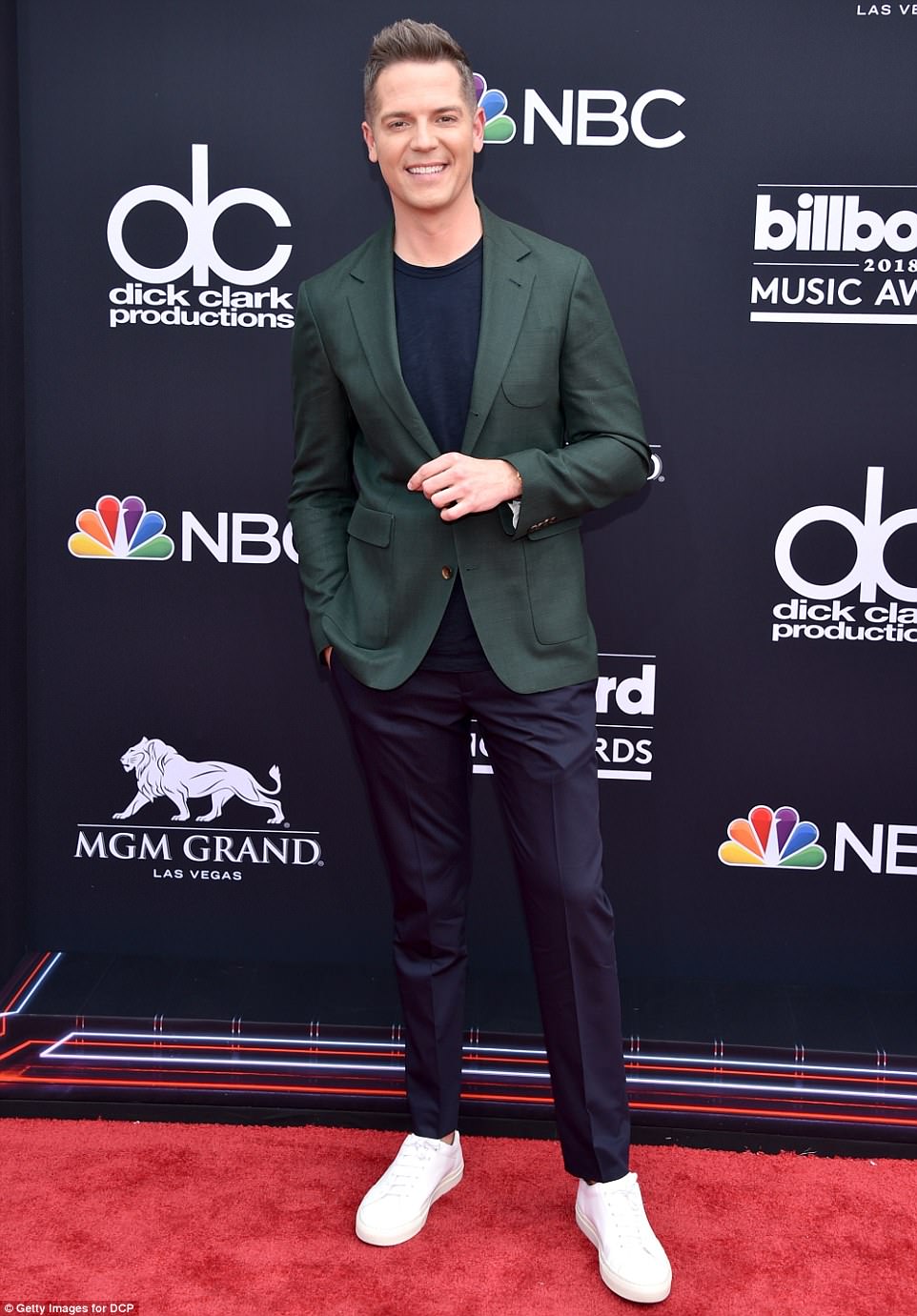 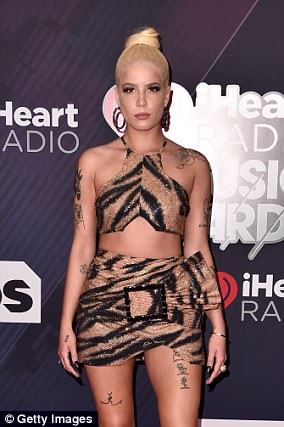 Ed Sheeran, ‘Shape Of You’ Ed Sheeran is nominated for ÷ (Divide)

Chris Stapleton, From A Room: Volume 1