Europe had its warmest year on record in 2020, according to worrying findings from the European Union’s climate change monitor.

Data from Copernicus Climate Change Service (C3S) provides another stark warning for humanity regarding climate change, as temperatures have shot up in the last half-decade.

Winter and autumn 2020 were the highest on record for Europe, C3S also revealed.

Europe had its warmest year on record in 2020. Image shows average surface air temperature anomaly for 2020 relative to the 1981–2010 reference period (in °C)

C3S said it was especially warm over northeastern Europe in the winter, with an impact on snow cover and sea ice.

2020 also saw the largest number of hours of sunshine in Europe since satellite records began in 1983.

The European Commission-backed C3S published its European State of the Climate 2020 on Thursday, which also includes data for the Arctic and the globe as a whole.

‘Analysing the interplay of variables like temperature, sea ice, precipitation, river discharge or soil moisture underlines the importance of monitoring all parts of our climate system, to understand changing climate trends, with traceability back to the original data. 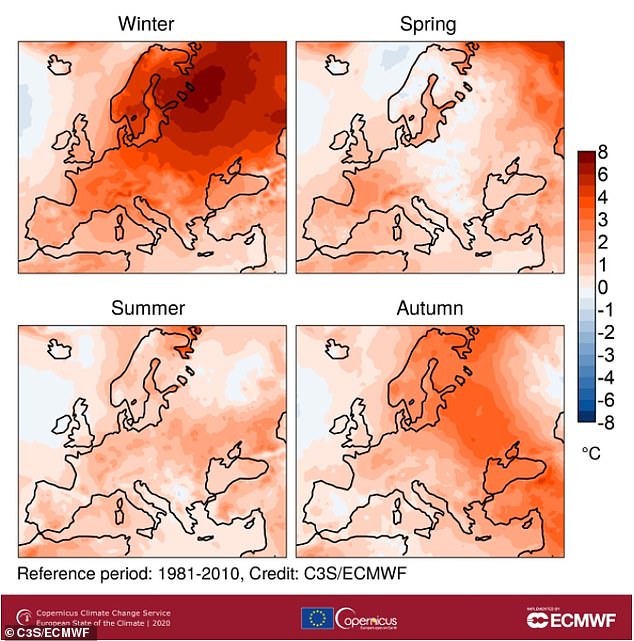 ‘It is more important than ever that we use the available information to act, to mitigate and adapt to climate change and accelerate our efforts to reduce future risks.’

C3S did admit that the 2020 heatwaves in Europe were not as intense or long-lived as in recent years.

However, during summer, episodes of very high temperatures occurred on a regional level and led to new temperature records, such as in Scandinavia in June and in western Europe in August.

For Europe as a whole, most days saw above-average temperatures relative to the 1981–2010 reference period, and they were consistently well above average during the beginning and end of the year.

The beginning of spring experienced large daily deviations, whereas the end of spring saw many days close to or below average.

Daily temperatures during summer were generally above average, except during July, when the daily temperature was below average for parts of the month.

Daily average European surface air temperature for 2020. The 2020 daily averages are shown as anomalies (above average in cyan, below average in orange) superimposed on the average for the 1981–2010 reference period (in black)

The last six years have also been the warmest six on record – corroborating a recent report from the World Meteorological Organization.

Global indicators show that the latest five-year average temperatures are the highest on record – at 2.1°F (1.2°C) above the pre-Industrial Revolution (1850-1900) average, C3S found.

The largest above-average annual temperatures occurred in northern Siberia and adjacent parts of the Arctic, where temperatures reached 10.8°F (6°C) above average.

The equatorial Pacific had below average temperatures associated with La Niña conditions that emerged in the second half of the year.

La Niña – the large-scale cooling of the ocean surface temperatures in the central and eastern equatorial Pacific Ocean – leads to variations in global weather.

And concentrations of carbon dioxide (CO2) and methane (CH4) – both of which are greenhouse gases – continued to rise in 2020 globally and are at their highest annual levels since at least 2003 when satellite observations began.

While the early part of the year was colder than average over large parts of the Arctic, summer and autumn made up for this, according to C3S – both seasons had the highest temperatures on record. 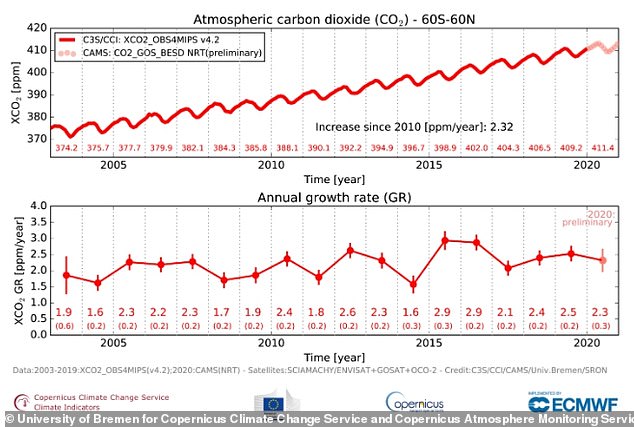 2020 was one of three warmest years on RECORD: WMO

2020 was one of three warmest years on record, according to a new report, despite La Niña – the large-scale cooling of the ocean surface temperatures in the Pacific.

The six years since 2015 have been the warmest on record, while the period 2011 to 2020 was the warmest decade on record, WMO said in its State of the Global Climate 2020 report, published today.

Statistically, 2020 was just behind 2016 and just ahead of 2019 in terms of global temperatures, putting it within the top three.

But a WMO spokesperson told MailOnline that the difference between the three is so small that it falls within the margin of error.

Read more: 2020 was one of three warmest years on record, study says