Twenty eight tonnes of Nazi gold worth more than £1billion may have been traced to the grounds of a palace in Poland after the location was mentioned in an SS diary.

The stash of gold bars, jewellery and coins is believed to be sitting 200ft down at the bottom of a destroyed well shaft in the grounds of the Hochberg Palace, near the city of Wroclaw.

Researchers from the Polish-German Silesian Bridge Foundation, who claim to have acquired the diary last year from a masonic lodge, say the treasure was buried in the final days of the Second World War along with the corpses of several witnesses.

Researchers in Poland claim that a diary written by an SS officer who helped hide Nazi treasure at the end of the Second World War has revealed one stash is hidden at the bottom of a destroyed well in the grounds of a palace (pictured, the diary page in question)

The treasure is said to include deposits from the Reichsbank in what was then the German city of Breslau but is now Wroclaw.

It is also said to include valuables from wealthy locals who handed them over to SS soldiers in the region for safekeeping as the Red Army advanced in 1945.

If the claim is true, then the treasure could be worth as much as £1.25billion at today’s prices.

Roman Furmaniak, head of the foundation which traced the location, said he is going public with the findings in an attempt to pressure the government into investigating.

He presented the diary – which he claims has been authenticated in Germany – to the Polish Ministry of Culture last year, but they have yet to verify it.

Planning and financing the dig without first getting permission from the government is proving difficult.

However, the foundation says they have been given the go-head by the palace’s current owners – who have set up a perimeter fence and CCTV security. 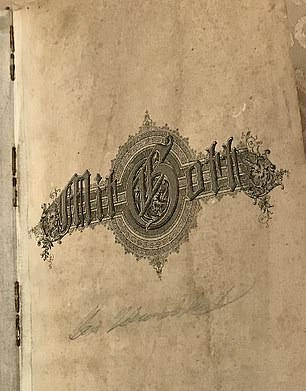 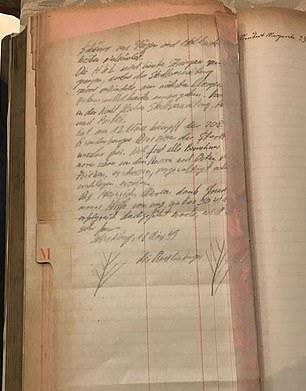 The 75-year-old diary page, which starts by giving soldiers ID numbers 453 and 219, says: ‘Many thanks to Mr Grundmann. We met in the palace of the Hochberg family.

‘Dr Grundmann and his people had already prepared in the grounds of the palace a deep well.

‘The following was placed at the bottom in crates: jewellery, coins and ingots, many of them were damaged, they had traces of gunfire. 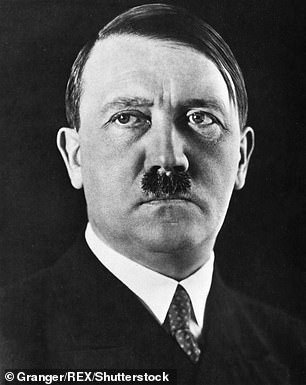 The diary is allegedly written by Egon Ollenhauer, and officer who helped hide Nazi treasures at Hitler’s behest

‘After we finished everything, the well was blown up, filled in and covered.

‘Mr Grundmann is a very good organiser. After the delivery of these 28 tonnes, the field gendarmes were sent away, their whereabouts ‘May God watch over them’ is unknown.

‘Sealing, covering and securing the site was achieved by an explosion, which was planned in the park according to Dr Grundmann’s plan and sketch.

‘Unfortunately, I only have the stamp left. After we came under fire and took a direct hit we lost everything.’

Gunther Grundmann was the heritage conservator for the Germans in Lower Silesia before and during the war.

In 1942, fearful of Allied air raids, he was given the task of cataloguing the vast art holdings of Reich museums, institutions and also private collections.

By mid-1944, he had hidden the items on his list in around 74 places in Lower Silesia.

Mr Furmaniak said: ‘Based on instructions I received from the Quedlinburgers, I believe I have located the well in the grounds of the palace.’ 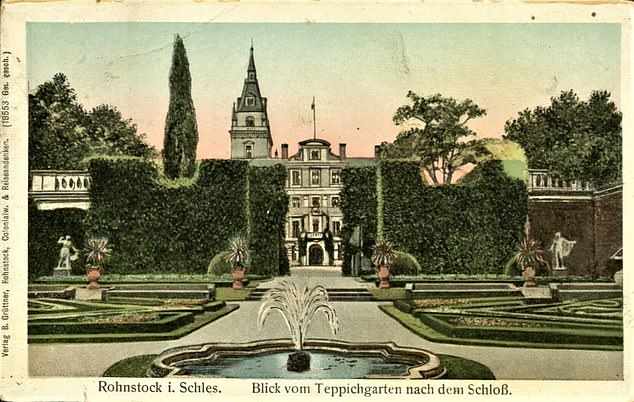 The well is believed to be located in the grounds of the Hochberg Palace (pictured), around the location of the fountain shown in this photo 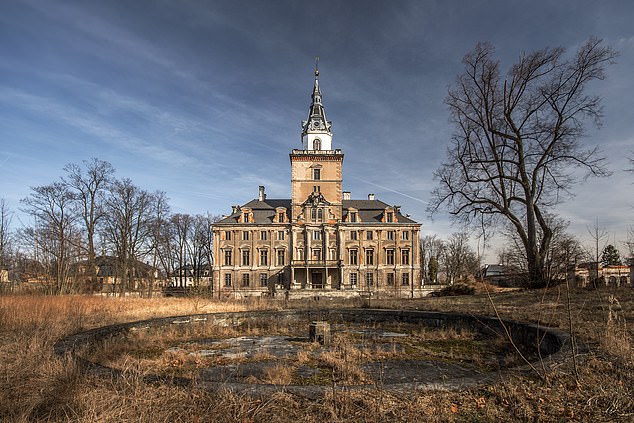 He believes the treasure at Hochberg Palace is one of 11 that are hidden across southern Poland, parts of the Czech Republic and eastern Germany.

One cache is said to contain 47 works of art thought to have been stolen from collections in France, including paintings by Botticelli, Rubens, Cezanne, Carravagio, Monet, Dürer, Raffael and Rembrandt.

And another stash is said to contain religious objects stolen from around the world in an attempt to find evidence for Hitler’s racist ideology.

Furmaniak claims the diary was written by SS officer Egon Ollenhauer, who provided a link between SS officers hiding the treasure and wealthy SS members and their families who owned the valuables.

The dairy is reputed to claim that Hitler ordered 260 trucks laden with valuables to be hidden away in the Silesia region as the tide of the Second World War turned against him.

According to Furmaniak the diary was held for decades by a 1,100-year-old masonic lodge in Saxony-Anhalt before being handed over to Silesian Bridge 10 years ago.

He said details could only be released last year after those connected to the events in the diary had died.