3 Steps to Planning a Vietnamese Funeral 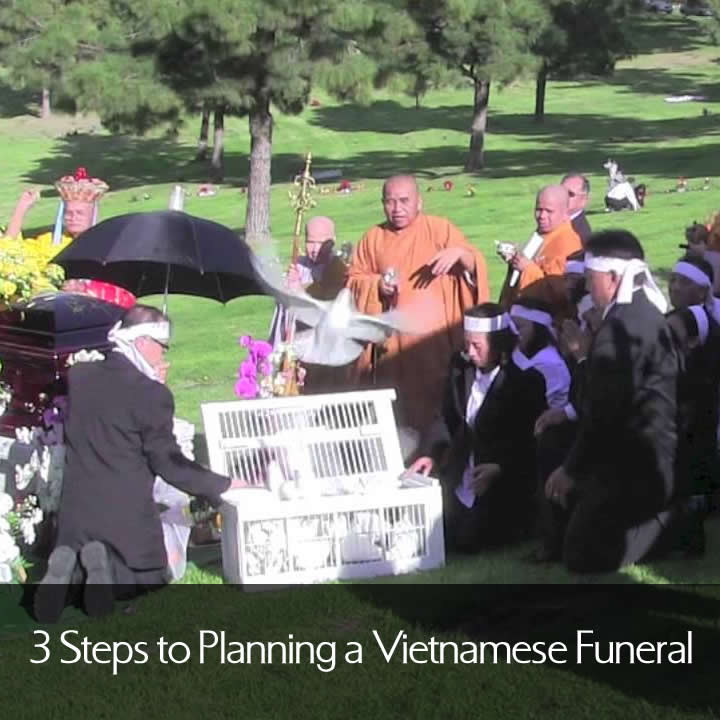 The first stage of a Vietnamese funeral involves cleaning the dead body and placing it inside the coffin. This stage is also known as Nhap Quan which means entering the casket. The body of the deceased is cleaned using alcohol and water and is dressed in clean clothes. All the family members of the deceased needs to wear white clothes made from thin gauze. These are worn over regular clothes and signified mourning for the dead. Black and white flags are hung around the house to indicate that someone has passed away recently. If the deceased is a Buddhist, an egg and a bowl of rice are placed on top of the coffin; if he/she is a Christian, a card of death is placed on the casket.

The second stage is the mourning phase where family, friends, and relatives come to share their grief for the dead. All the guests gather around the coffin which is placed at the center of the house. Everyone prays for the salvation of the deceased person’s soul. The relatives and friends console the family members. This stage may take a few hours to complete depending on the number of guests coming to visit the house. Visitors usually wear black as a sign of mourning. They bring flowers, incense sticks, or sometimes an envelope containing money that can cover the funeral cost.

The third stage is when one of the family members thanks all the guests for coming. As the mourning phase is over, everyone is invited to go to the cemetery with the family to attend the last rites. Vietnamese dead bodies can either be buried or burned depending on the tradition that the respective family follows. But before any of that happens, the coffin is placed on a rice field, and the eldest child needs to walk back from the coffin and roll on the ground. It is a mark of grief for their parent’s death.

Planning a Vietnamese funeral in other countries

The modern Vietnamese funerals in other countries, like Australia, are simpler. They don’t involve cleaning the body with alcohol and water. The preparation of the body only includes covering it with a new dress instead of following the traditional rituals. Usually, there’s a long procession that leads to the cemetery including the family members, relatives, and friends. But in countries other than Vietnam like the Australia or Canada, the procession is not so elaborately planned as there may not be as many relatives as the deceased’s home town.

The mourning period after a Vietnamese funeral usually lasts from 3 months to 3 years, but in other countries, there’s only a 49-day mourning period. Mourners need to wear a small black cloth on their chest or arm. Family members of the deceased can also arrange for a death anniversary to remember and honour the one who has left this world and moved on to a better one.