At least 41 people have been killed after a train smashed into a truck and derailed inside a tunnel in Taiwan.

Some 70 passengers remain trapped inside the mangled carriages, while another 40 have been rushed to hospital, after the train crashed outside the city of Hualien on Friday.

The express train was packed with around 350 people, many of whom were standing, as it carried tourists who were heading home at the start of the long weekend.

The train clattered into a flatbed truck which officials believe had slid down onto the tracks from a nearby construction site after it was ‘improperly parked’.

Images of the crash scene show train carriages ripped apart and crumpled against the sides of the tunnel, preventing rescuers from reaching passengers. 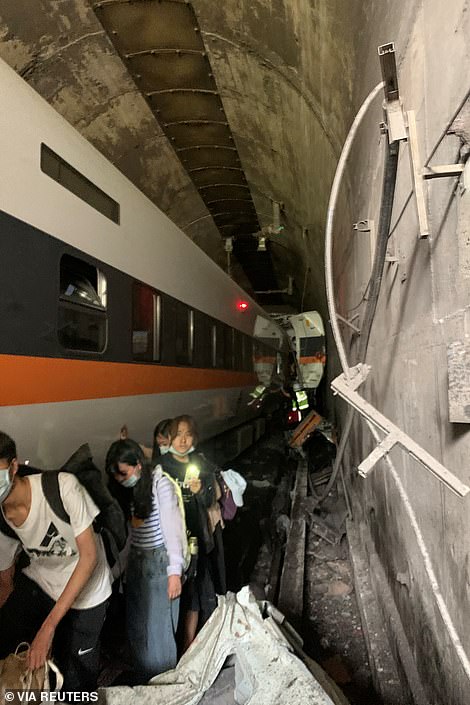 The train, an express travelling from Taipei to Taitung carrying many tourists and people heading home at the start of a long weekend, came off the rails north of Hualien in eastern Taiwan (pictured: a crumpled carriage, left, and people fleeing the wreckage, right) 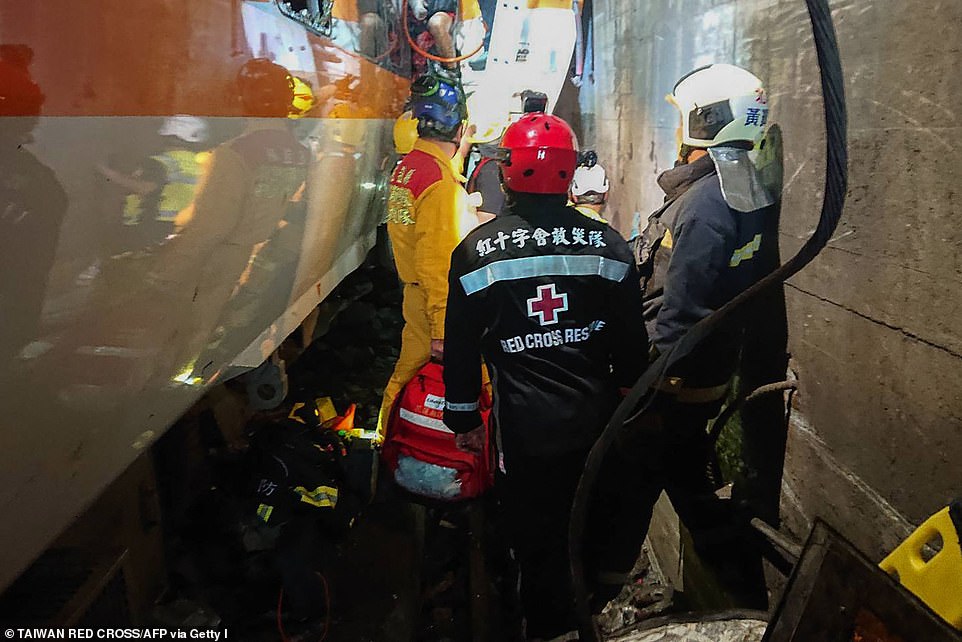 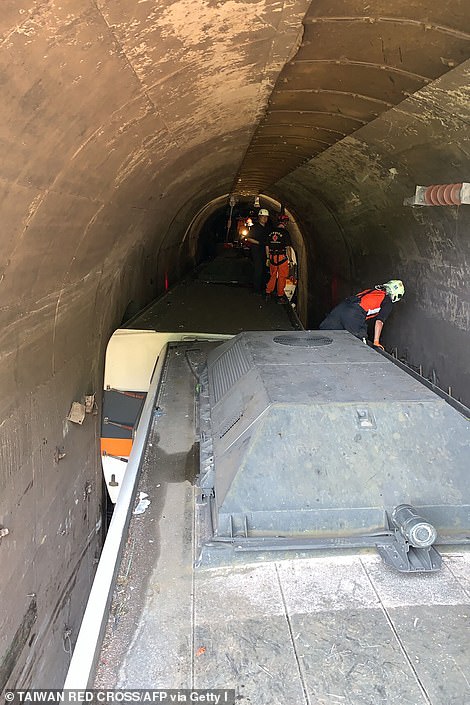 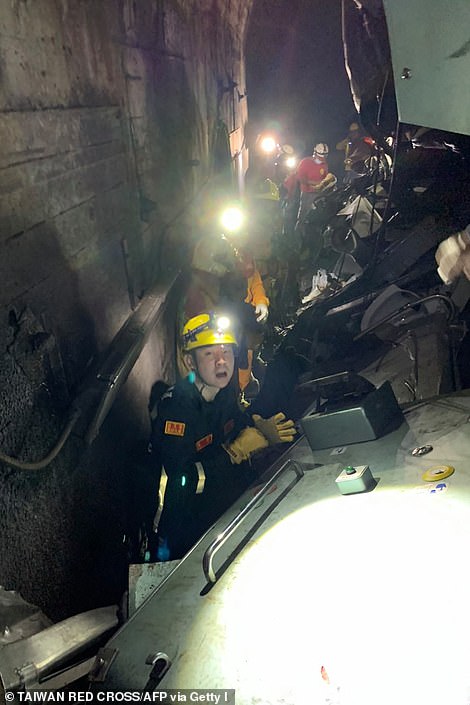 Members of the Taiwanese Red Cross are seen climbing on top of the train, left, while others with head torches on are seen beside a derailed carriage, right 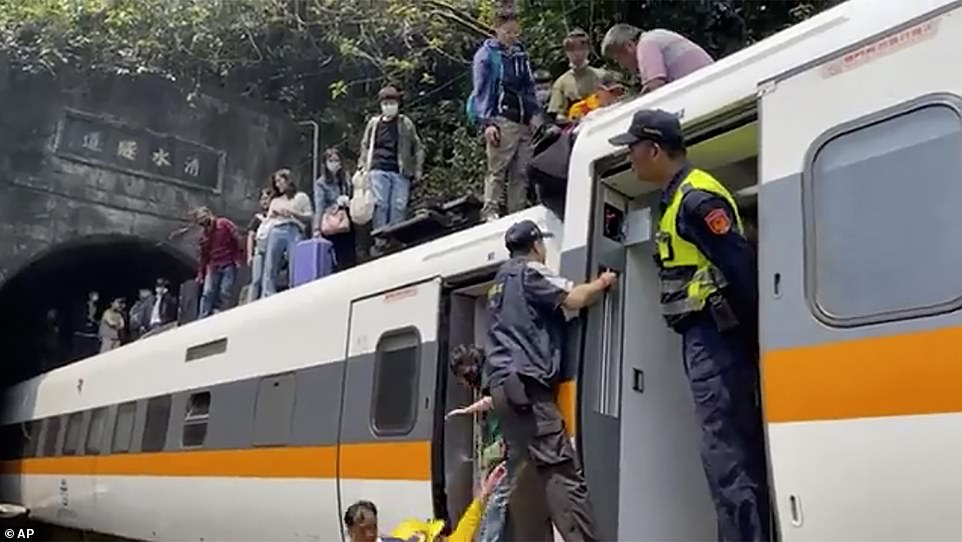 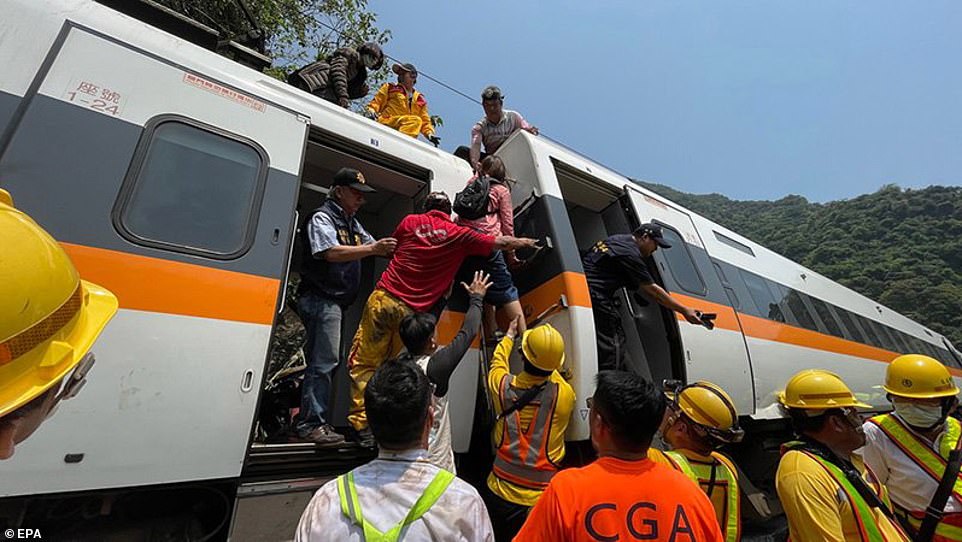 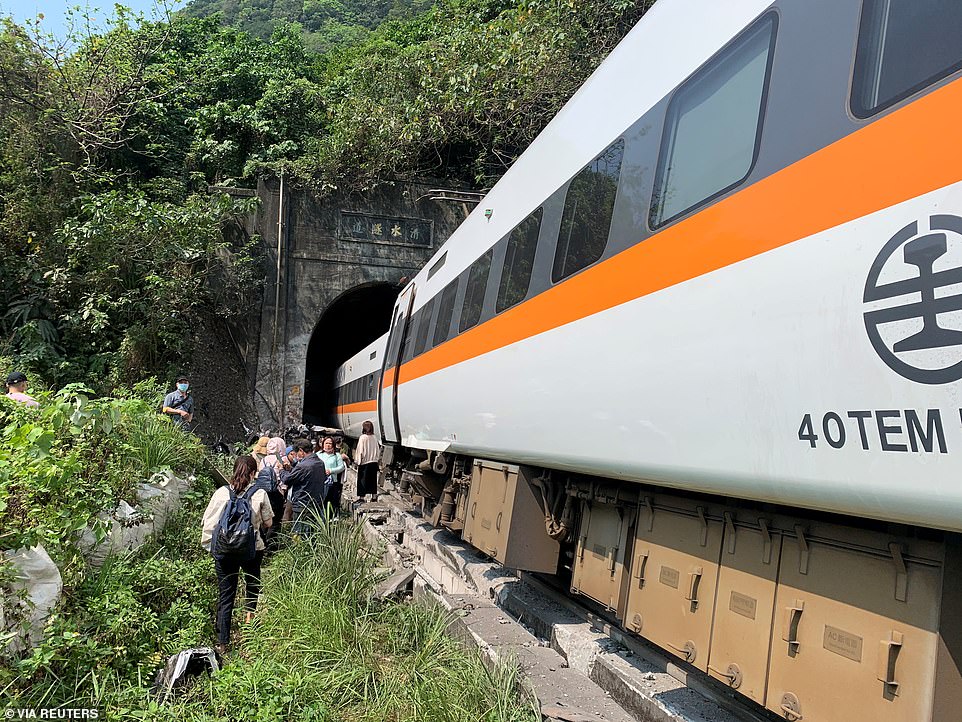 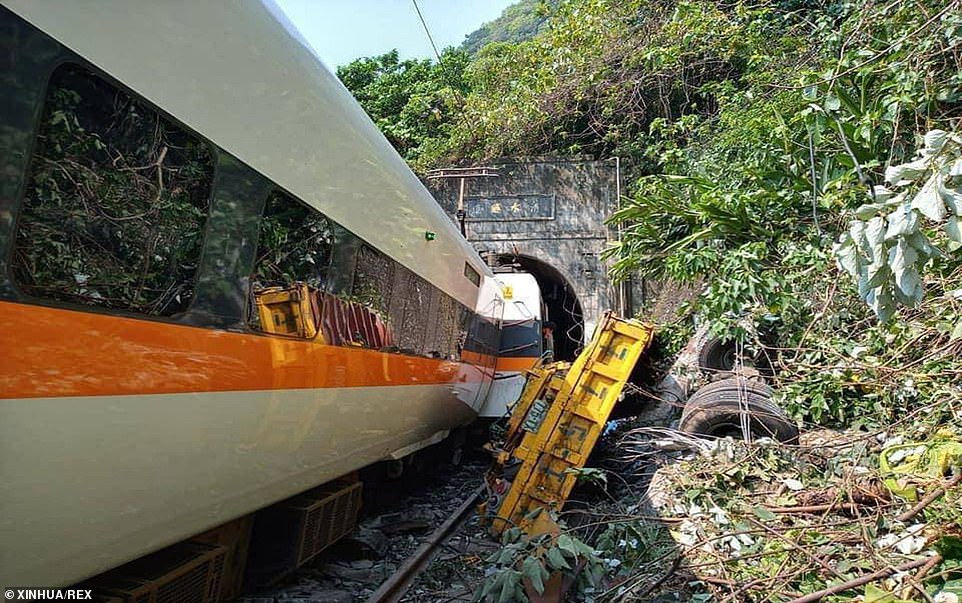 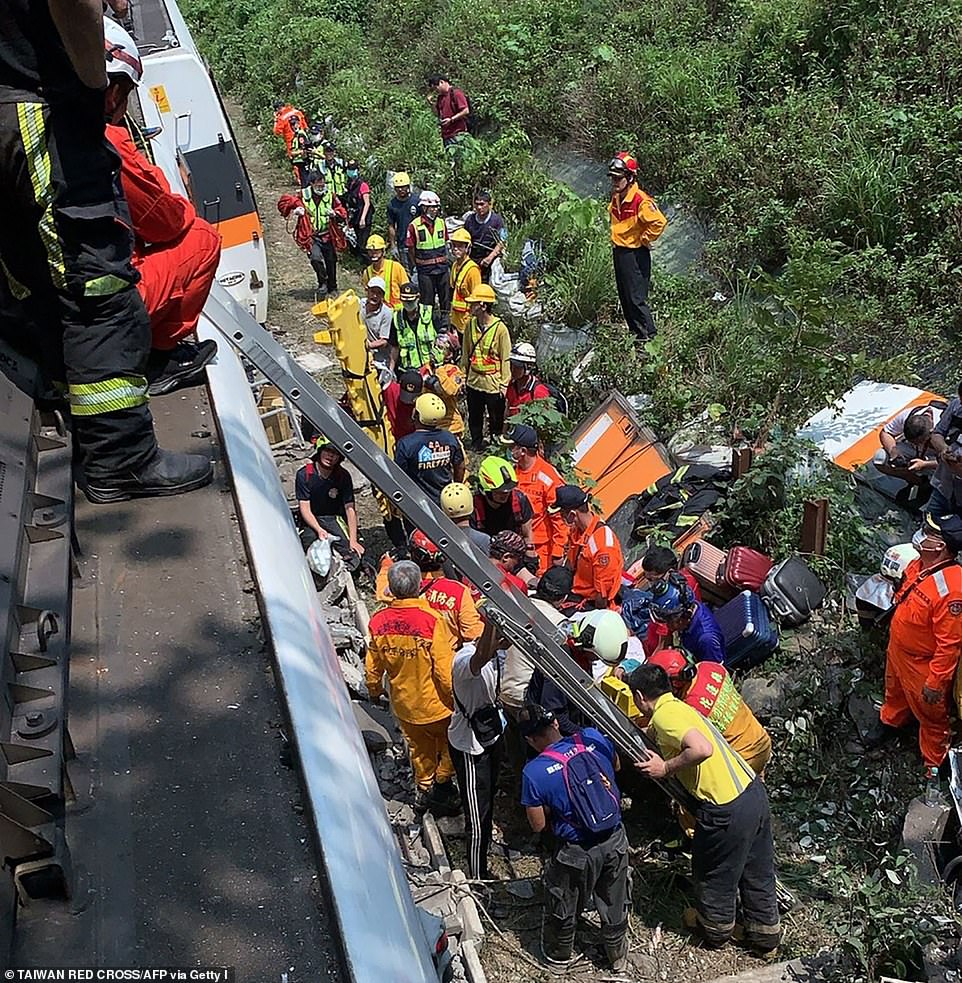 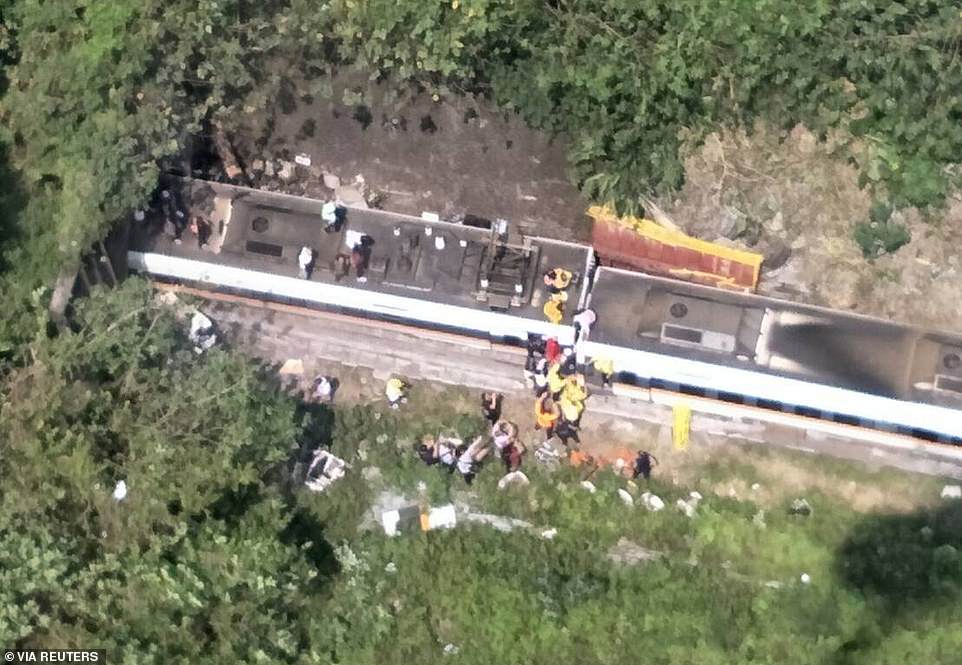 Aerial footage shows people escaping from the train, using the roof to clamber out of the tunnel

Many people who were standing for the journey were thrown about when it crashed.

Between 80 to 100 people were evacuated from the first four carriages of the train, while carriages five to eight have ‘deformed’ and are hard to gain access to, the fire department said.

‘Is everyone out in carriage four?’ a lady is heard shouting from inside the tunnel, in footage provided by the fire department.

The official Central News Agency said a truck that was ‘not parked properly’ was suspected of sliding into the path of the train from a nearby construction site.

Pictures from the scene showed the back of a yellow flatbed truck on its side next to the train.

‘Our train crashed into a truck,’ one man said in a video aired on Taiwanese television, showing pictures of the wreckage. ‘The truck came falling down.’

People further back in the train were able to walk away from the crash comparatively unscathed.

One injured passengers was seen being stretchered out of the train with her head and neck in a brace.

People further back in the train were able to walk away from the crash comparatively unscathed. 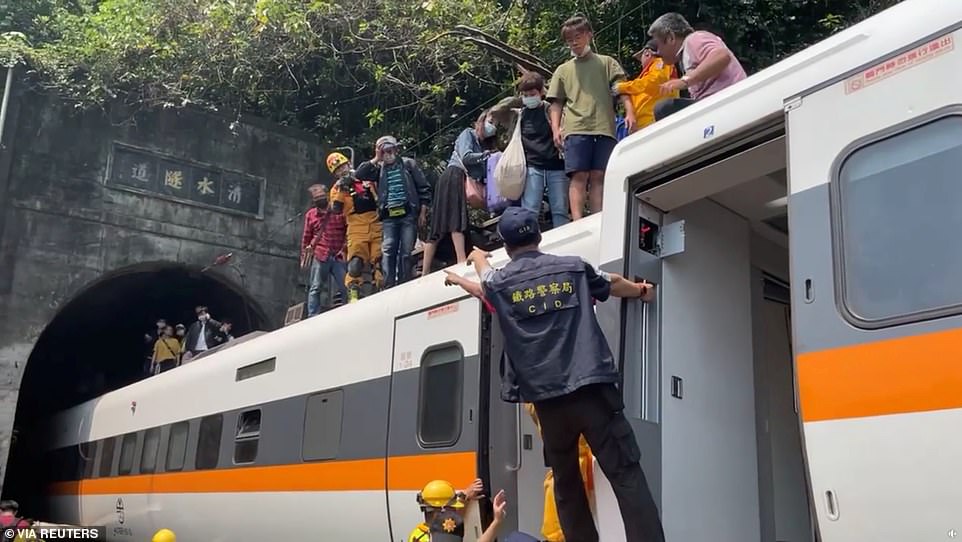 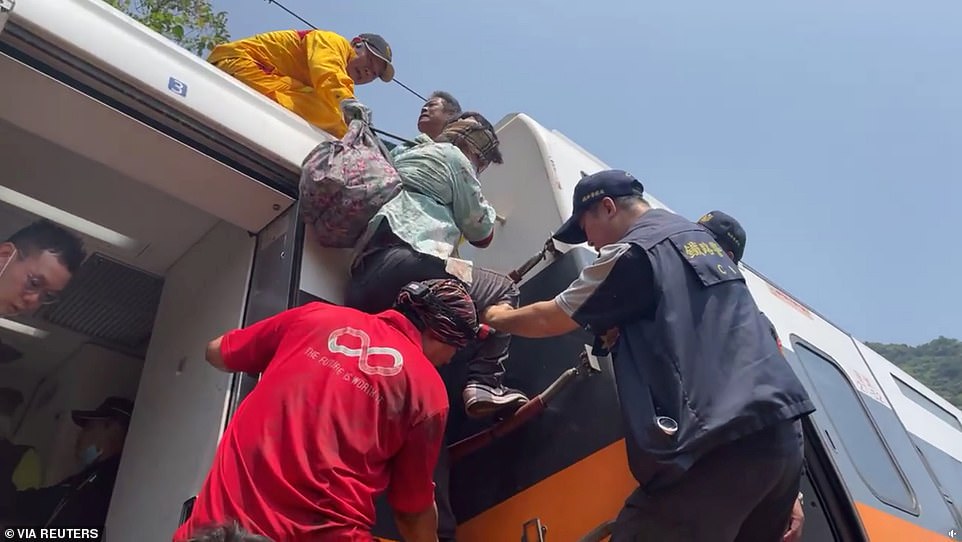 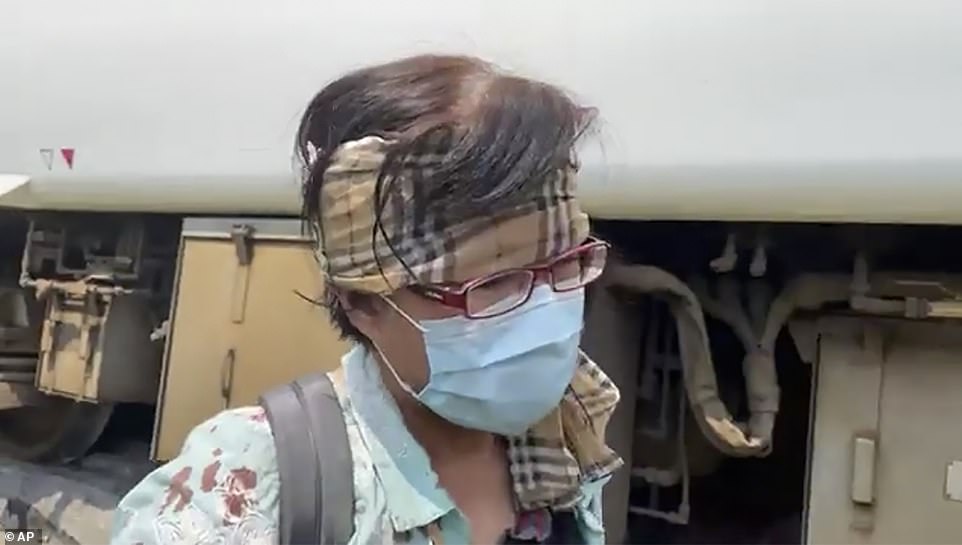 Many of these more fortunate passengers were seen walking out of the tunnel over the roof of the train.

‘It felt like there was a sudden violent jolt and I found myself falling to the floor,’ an unidentified female survivor told local media, saying she suffered a cut to her head.

‘We broke the window to climb to the roof of the train to get out,’ she added.

The eight-car train was travelling from Taipei to the southeastern city of Taitung.

The accident occurred at the start of the busy annual Tomb Sweeping Festival, a long holiday weekend when Taiwan’s roads and railways are usually packed.

During the festival, people return to ancestral villages to tidy up the graves of their relatives and make offerings.

With the help of multiple tunnels and bridges, it winds its way through towering mountains and dramatic gorges before entering the picturesque Huadong Valley.

The last major train derailment in Taiwan was in 2018 and left 18 people dead at the southern end of the same line. 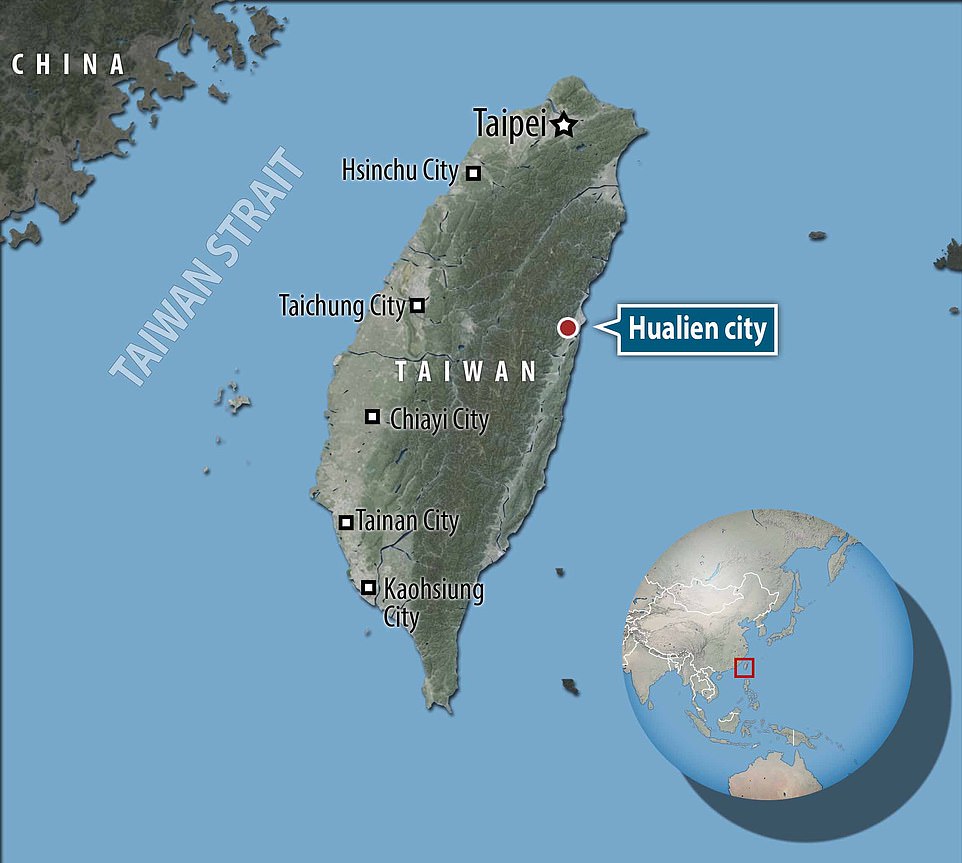 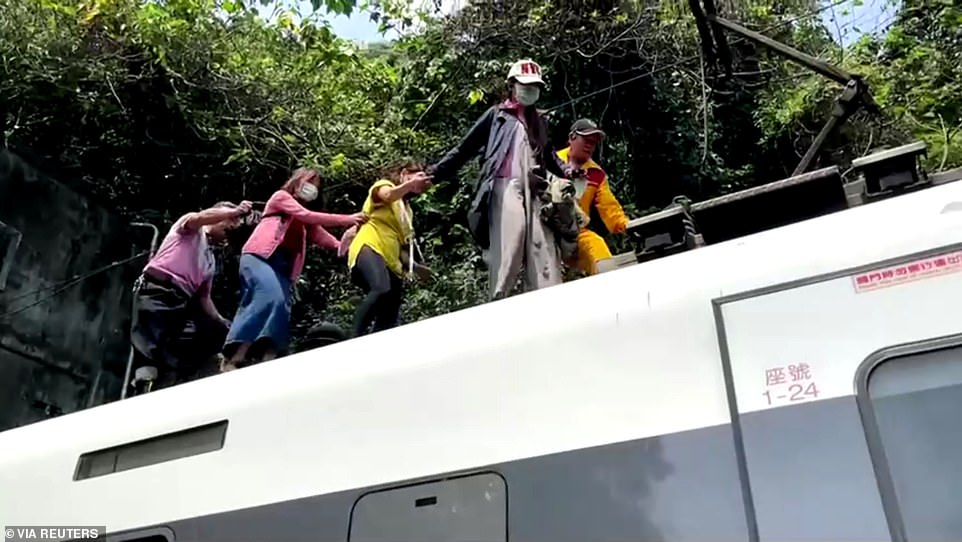 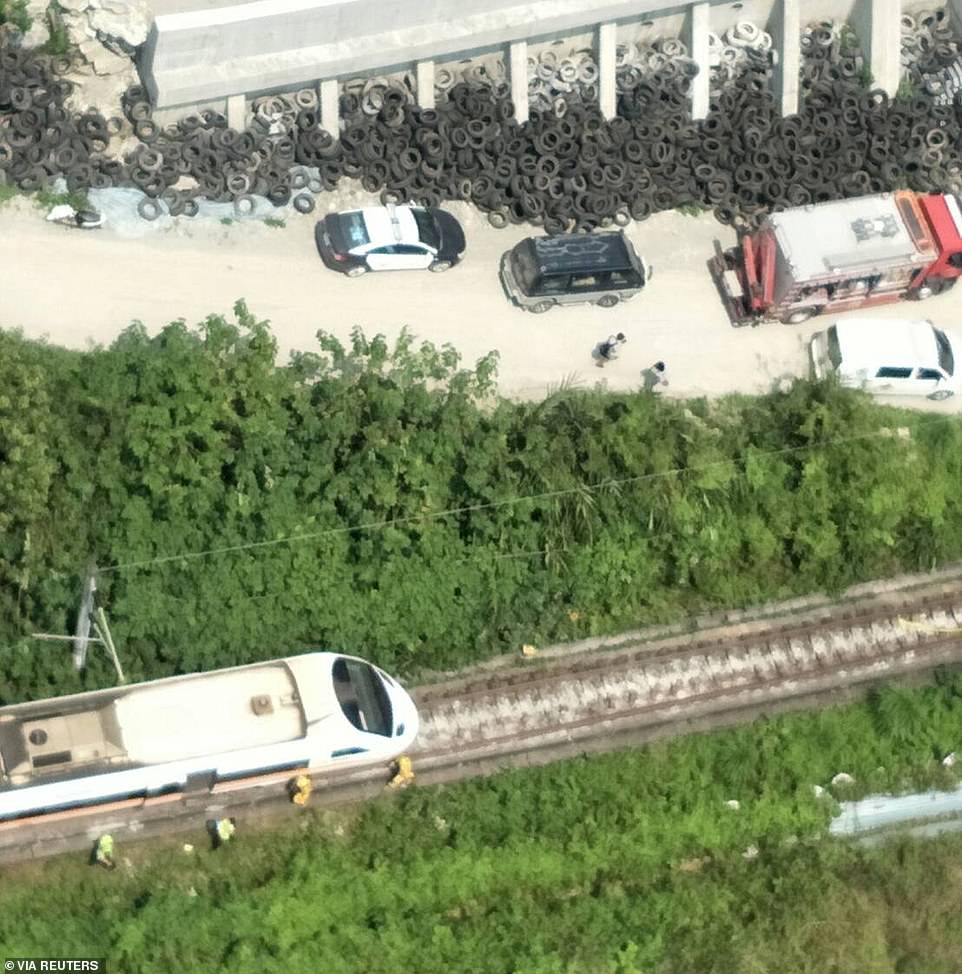 The driver of the eight-carriage train was later charged with negligent homicide. More than 200 of the 366 people on board were also injured.

That crash was the island’s worst since 1991, when 30 passengers were killed and 112 injured after two trains collided in Miaoli.

Thirty were also killed in 1981 after a truck collided with a passenger train at a level crossing and sent coaches over a bridge in Hsinchu.

And in 2003, 17 died and 156 were injured after a train on the Alishan mountain railway plunged into a chasm at the side of the track.