This is the horrifying scene left behind after Syrian regime forces hit a bunker in eastern Ghouta with Napalm overnight, burning at least 37 civilians to death.

Rebel group Failaq al-Rahman, which controls the town, said around 125 people, mostly women and children, were inside the shelter when the bomb exploded just before midnight when a ceasefire was supposed to take effect.

At least 37 people were burned to death after an underground shelter in the town of Abrin, in Eastern Ghouta, was hit with Naplam by regime forces overnight, according to observer groups and witnesses 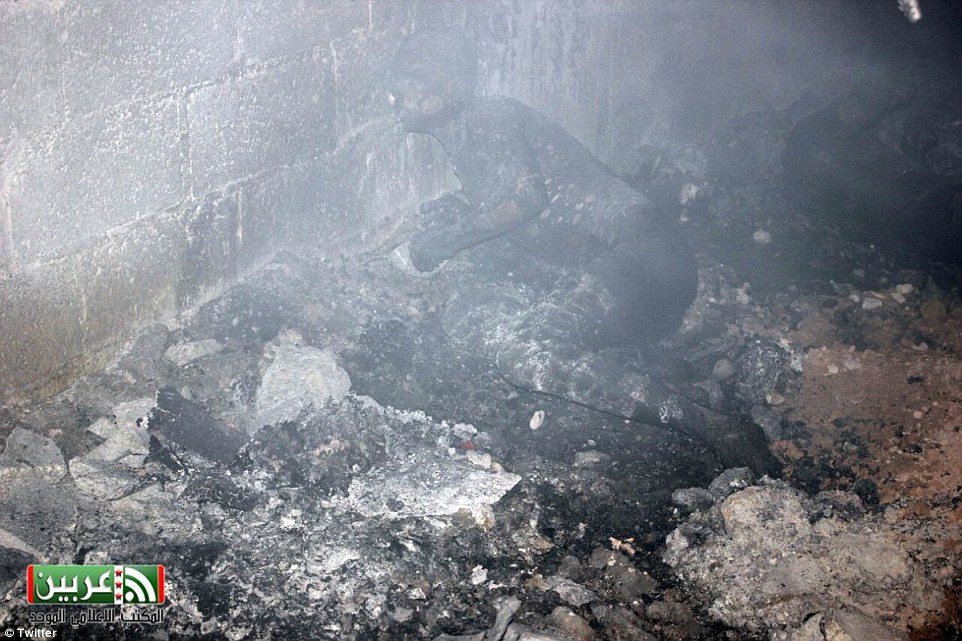 Failaq al-Rahman, the rebel group in control of Arbin, said around 125 people – mostly women and children – were in the shelter at the time the bomb struck, and they expect the death toll to rise. Above is an image being circulated on social media, purporting to show the scene in the bunker after the attack 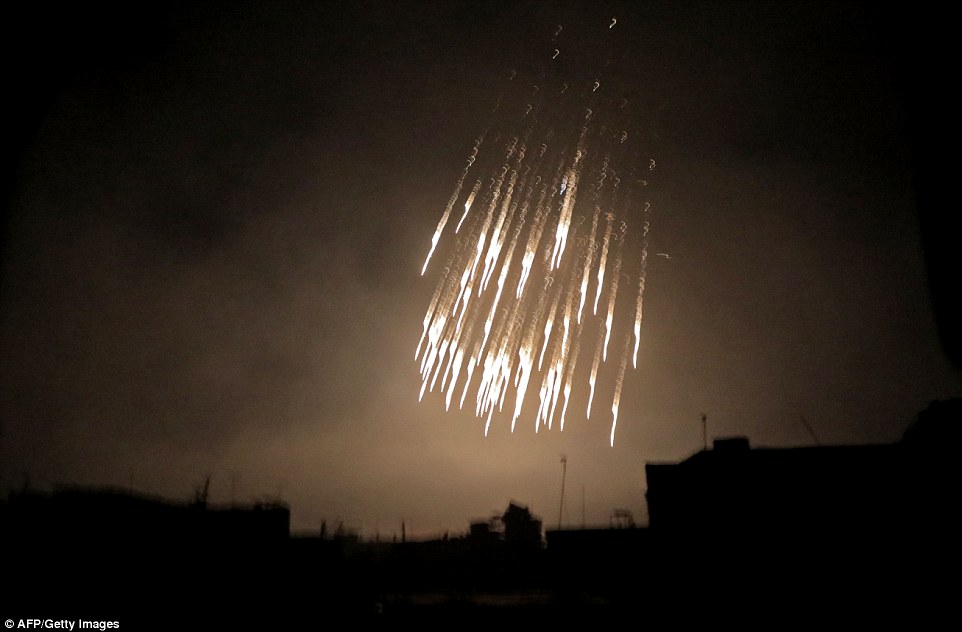 Syrian government forces also dropped bombs containing what appeared to be white phosphorus, a banned weapon, over the rebel-held town of Douma overnight on Thursday 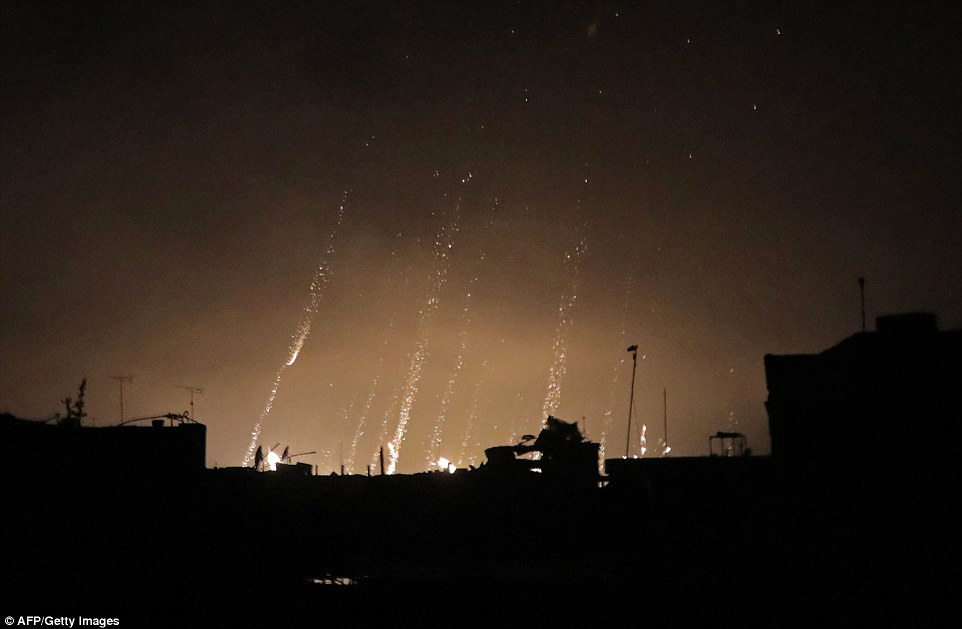 Douma, which is controlled by the Jaish al-Islam group, is one of just two rebel enclaves left in the Eastern Ghouta region. A third, around the town of Harasta, was emptied of fighters overnight 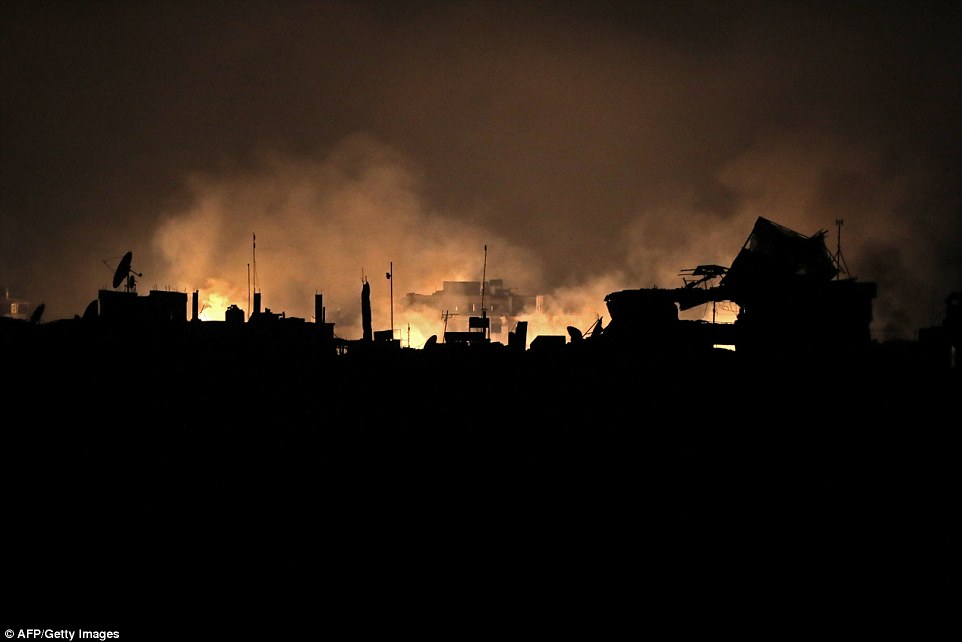 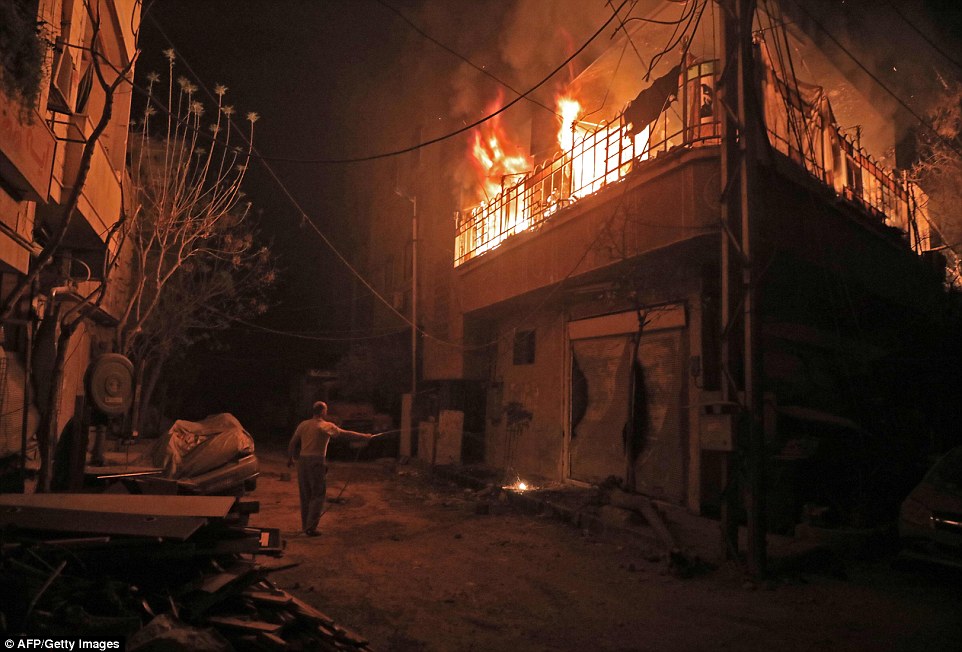 A man tries to extinguish flames after a building was set alight in Douma overnight. It is unclear if there were any casualties in the raids, which happened in the early hours of Friday

Izzet Muslimani, an activist in the town, told Al Jazeera: ‘Those who were injured are still being treated for first and second degree burns. With the lack of emergency services, we are expecting the death toll to rise.’

There were conflicting reports over who was responsible. The Britain-based Syrian Observatory for Human Rights attributed the attack to Russia, though the country vehemently denies carrying out any attack in Ghouta.

Activists on the ground said the Syrian air force was responsible for the atrocity. The use of Napalm in warfare is effectively banned under international weapons treaties.

Rebels in Arbin had earlier said they were hoping to be allowed to evacuate the city under a ceasefire, the term of which had been provisionally agreed, though it never materialised. Negotiations were continuing on Friday.

Elsewhere rebels were allowed to evacuate the town of Harasta, with up to 400 fighters and their families taken out of the enclave on government buses bound for Idlib province.

This follows a pattern which the Syrian government and its Russian allies have used elsewhere in the conflict: lay siege to an area, bombard it, launch a ground assault and finally offer passage out to rebels who agree to leave. 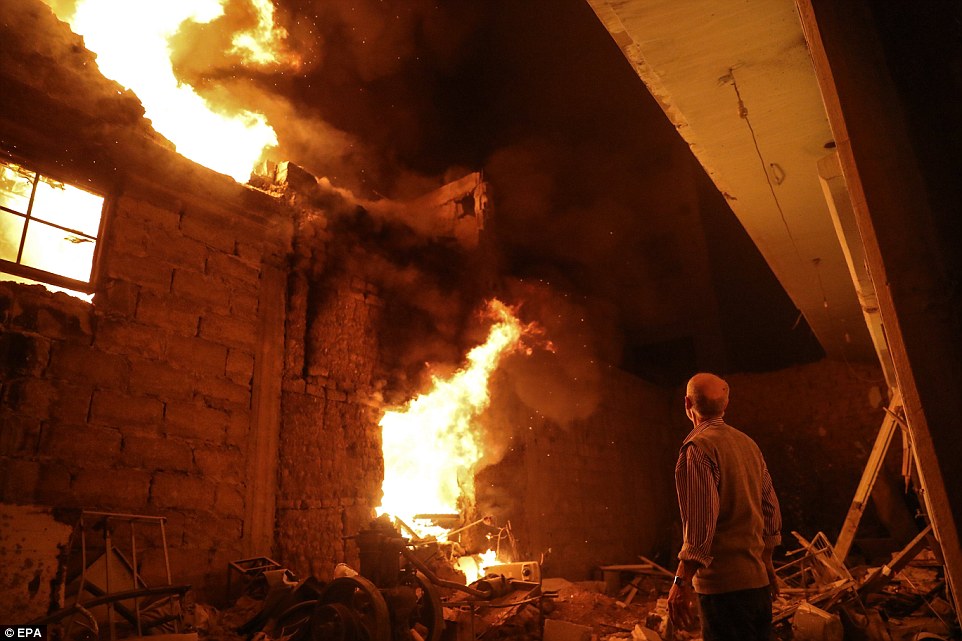 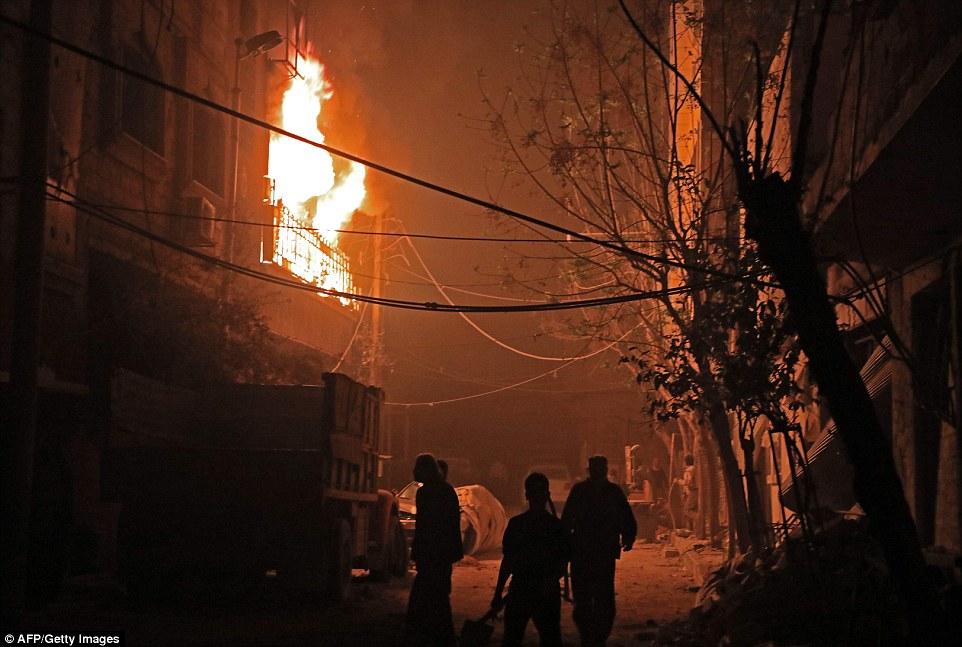 Ghouta has been under siege for the best part of five years but attacks on the region drastically escalated in February as the government pushed to retake the region (pictured, a fire burns in Douma) 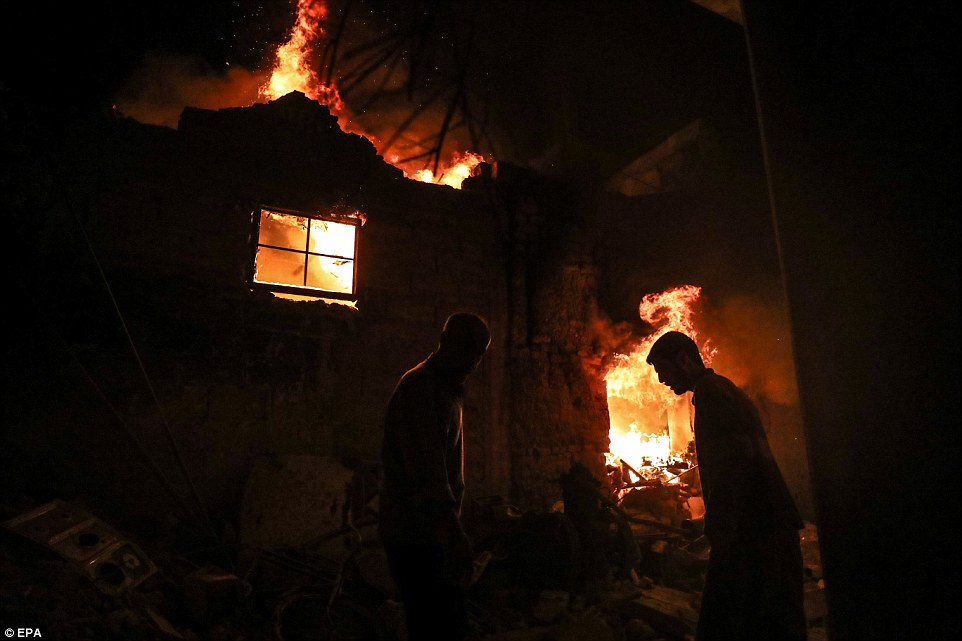 The Syrian government and its Russian allies are using a tactic they have repeated throughout the war to recapture Ghouta – lay siege, bombard, send in ground troops, then offer evacuation to any rebels left (pictured, fires burn in Douma) Bashar al-Assad and Russia have been accused of indiscriminately using weapons against both civilians and rebels which has seen some 1,500 innocents killed in Ghouta in the last month, according to observer groups 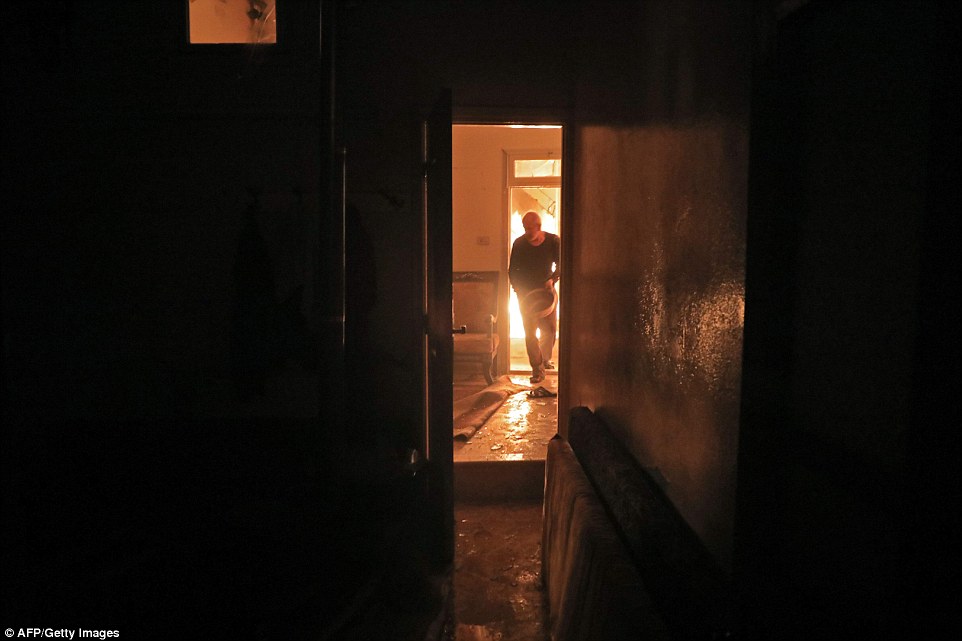 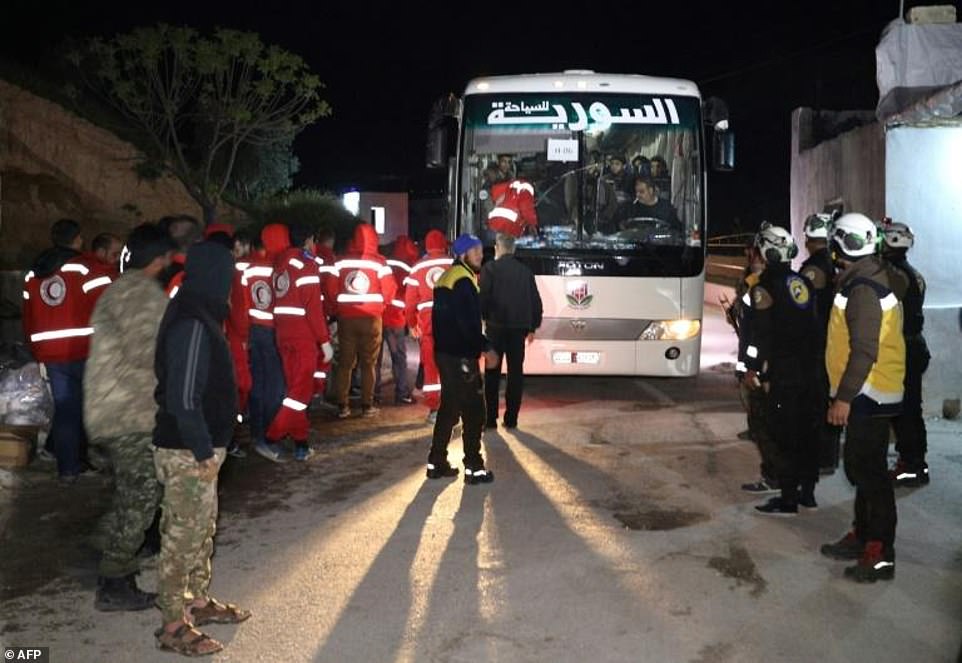 Up to 400 rebel fighters and their families were allowed to flee the town of Harasta overnight on government buses, effectively bringing the rebel stronghold under Assad’s control

Meanwhile in a third and final rebel enclave in the town of Douma, bombs containing what appeared to be white phosphorous, another banned weapon, rained down on the city overnight.

Videos and pictures from the ground showed dozens of fires burning around the city in hellish scenes.

If the evacuation of Arbin is successful, that would leave only the town of Douma still under rebel control.

Pro-regime forces launched a blistering air and ground offensive on the Eastern Ghouta region on February 18.

The assault has retaken 80 per cent of the enclave, the Syrian Observatory For Human Rights says, and what remains is within mortar range of Damscus, allowing for constant bombardment.

The one-month offensive on Eastern Ghouta has killed more than 1,500 civilians, the Observatory says, and caused tens of thousands to flee into government-held areas.

More than 350,000 people have been killed in the Syrian conflict since it broke out in 2011 with the brutal repression of anti-government protests.