Some 375,000 Britons say they are still suffering from ‘Long Covid’ a year after fighting off the infection, according to the largest study of its kind.

And a million people reported experiencing symptoms including chronic fatigue, muscle pain and shortness of breath at least a month after catching the virus.

The Office for National Statistics survey also found almost two thirds of those who had the condition said it was limiting their day-to-day activities.

Middle-aged women and people living in the most deprived areas or working in health and social care were most likely to suffer from the condition.

Fatigue was the most common symptom reported, followed by shortness of breath, muscle aches and difficulty concentrating.

MPs today urged the Government to fix the ‘postcode lottery of care’ for sufferers of Long Covid, after an investigation found some were waiting more than 100 days for treatment.

The ONS survey estimated the prevalence of the condition across the country after questioning more than 300,000 people.

Long Covid is an umbrella term encompassing symptoms that persist more than four weeks after a first suspected Covid episode that are not explained by other factors.

The number of Britons suffering long Covid symptoms for more than a year has quadrupled in a month, according to the Office for National Statistics 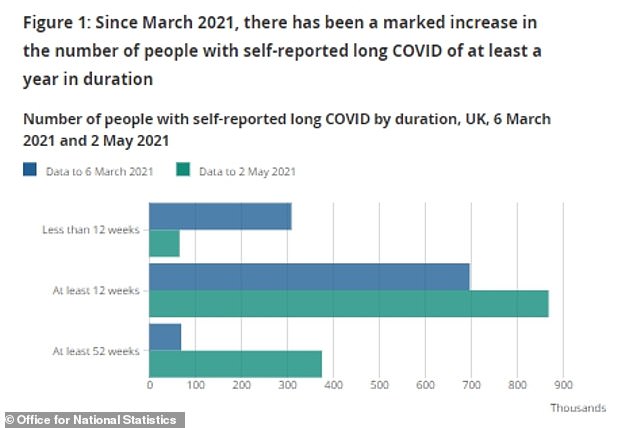 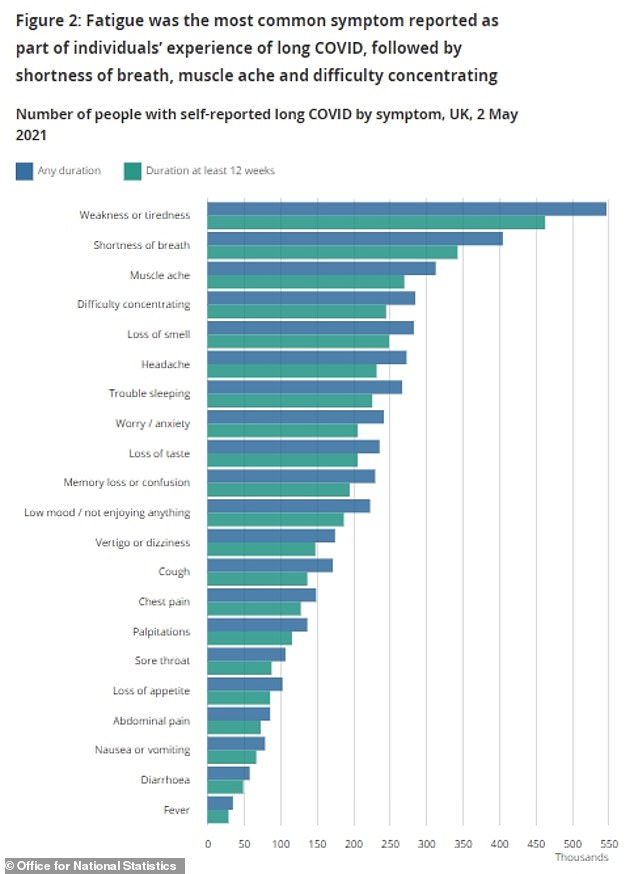 Fatigue was the most common persistent symptom, followed by shortness of breath, muscle aches and difficulty concentrating

WHAT ARE THE LONG-TERM SYMPTOMS OF COVID-19?

The ONS study asked 300,000 Britons if they had any lingering symptoms of the virus.

Their figures are then used to estimate the prevalence of the condition across the whole country.

But they warn errors could creep into the data because it relies on self-reporting, with participants not asked to provide evidence they have the condition.

There is no official definition of long Covid, with the condition instead diagnosed through a multitude of symptoms that persist after someone has fought off the virus.

The chair of the All-Party Parliamentary Group on Coronavirus, Layla Moran, said: ‘These figures should serve as a wake up call to ministers that they must urgently fix the postcode lottery of case facing those with long Covid.

‘Hundreds of thousands of people around the country are struggling with the debilitating impact of this condition yet are still not receiving the care they need.

‘Our research has found that long Covid patients are waiting over 100 days for treatment, while in some areas the clinics promised by the government have been delayed.

‘The government must take steps to alleviate the suffering faced by those with this cruel disease, and factor in the risks posed by long Covid as restrictions are eased.’

An investigation by the group published last month found while some long Covid patients are being seen in four days, others have to wait longer than 100.

They also revealed several clinics for sufferers that were promised by ministers were still not up and running three months after they were announced.

Several NHS trusts blamed the delays on financial and operational pressures, but two said they had no plans to open them.

This was despite Matt Hancock insisting the Government was doing ‘everything we can’ to support long Covid patients.

The APPG sent Freedom of Information requests to trusts across the country to establish how quickly long Covid patients were being seen, and whether clinics promised were up and running. 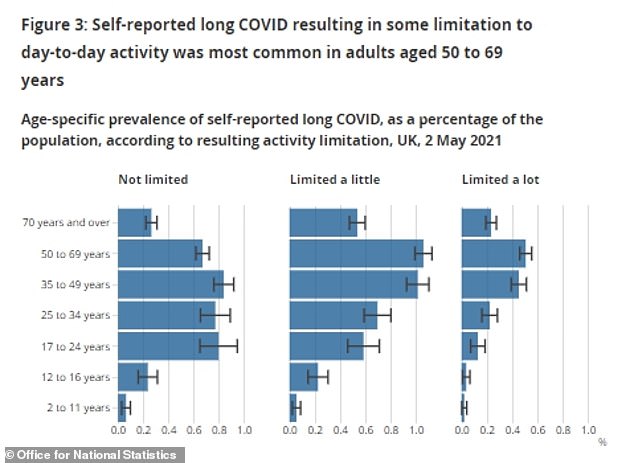 Almost two thirds of those who had long Covid said its symptoms were limiting their daily activities, while 195,000 said they were limited a lot

The head of analysis and life events at the ONS, Julie Stanborough, said: ‘Self-reported long Covid was most common in people aged 35 to 69 years, women, those living in the most deprived areas, and those living with an existing disability or heart condition.

‘Our analysis also shows that health and social care workers had a higher prevalence of self-reported long Covid than those working in other sectors, but this was largely driven by the risk of initial infection and other socio-demographic factors such as age, sex and location.’

The Health Secretary said in April he was ‘determined’ to improve care for Britons suffering the ‘lasting and debilitating’ impacts of Covid.

Estimates suggest long Covid strikes up to one in ten infected people, leaving them battling fatigue and brain fog for months.

NHS England has put aside more than £20million to treat the condition and set up a network of 72 sites across the nation to assist patients complaining of symptoms.