Vegetarian steaks and chicken produced by a 3D printer are on the menu in Barcelona thanks to the efforts of an Italian scientist – but he admits more work is needed to make them look tasty on the plate.

Giuseppe Scionti, a researcher from Milan, has developed the meat-free food using protein powder from rice or peas and components of seaweed.

Using CAD software Mr Scionti designed a programme to turn the food products, which are inserted into a machine using a syringe, into a long micro-filament which is then shaped into a steak.

The product, which begins life as a ‘straw-coloured paste’, is said to have a similar texture to genuine steaks and is designed to combat the environmental effect of meat production.

A piece of real chicken (left) and the 3D-printed chicken, which Italian scientist Giuseppe Scionti has described as a ‘fibrous plant-based’ meat substitute 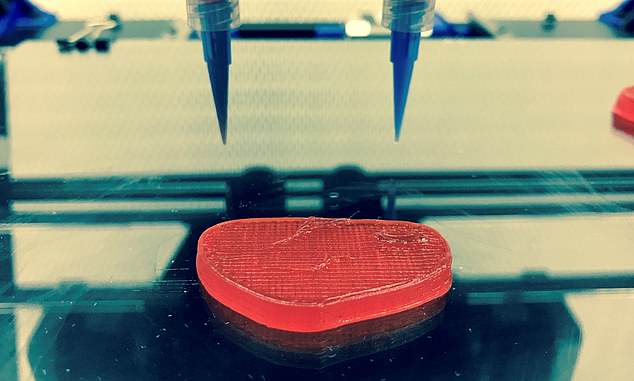 Using CAD software Mr Scionti designed a programme to turn the food products, which are inserted into a machine using a syringe, into a micro-filament which is then shaped into a steak

HOW DOES THE FAKE MEAT COMPARE TO REAL CUTS?

The scientist’s 3D-printed steak apparently has a similar texture to genuine steak (file photo below).

It has been compared to tofu although it is said to be ‘more fibrous than soft’.

One chef said the meat substitute cooks ‘really well’ without burning or sticking to the pan.

She said of the steak: ‘What’s this supposed to replace? Chicken?’

Mr Scionti admits that more work is needed to make the meats look tasty on a plate.

The machine can produce almost a quarter of a pound of raw vegetarian steak in 30 to 50 minutes.

Mr Scionti has also developed a chicken substitute, using the 3D printer to create what he calls a ‘fibrous plant-based chicken’.

The Italian researcher developed his 3D printing machine at the Polytechnic University of Catalonia in Barcelona, Spain.

Mr Scionti said he had already approached restaurant owners about selling his vegetarian food to customers.

The scientist told MailOnline: ‘We ate them with multiple journalists, and they thought that the plant-based prototypes possessed a animal meat-like texture.

‘The taste of the first prototypes is good, but it does’t mimic the taste of animal meat, yet.

‘However, that does not worry me, because the technologies to imitate the taste of animal meat have already been developed in the last years, while the main challenge for me was to obtain the animal meat-like consistency and texture, which was not invented yet. 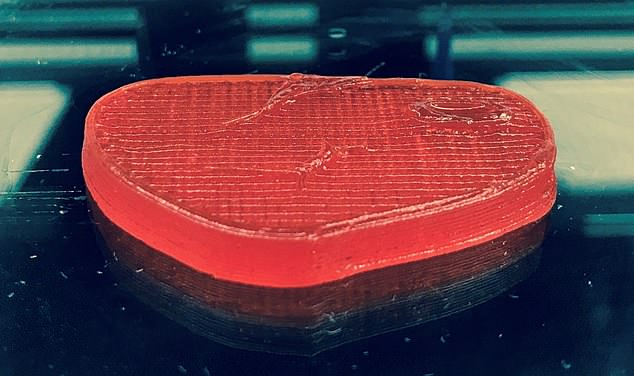 Pictured: One of the raw steaks printed by Mr Scionti’s invention. The Barcelona-based scientist said the steak needed more work to look like a regular item on a restaurant menu 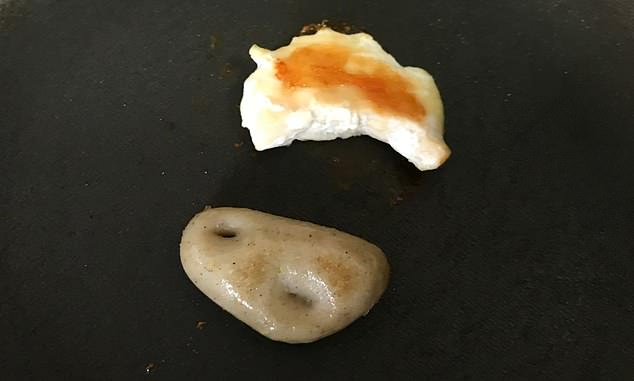 Mr Scionti has also developed a chicken substitute, using the 3D printer to create what he calls a ‘fibrous plant-based chicken’ (pictured bottom, with a piece of real chicken top)

‘There is a great demand for hamburgers in the US, but in the Mediterranean area we usually prefer to eat a piece of actual fibrous meat, and not just products derived from minced meat.’

The ingredients were ‘all natural, plant-based, non-GMO, and approved for food use anywhere in the world,’ he said.

He said he was aiming to reach the point where he could produce almost a quarter of a pound of plant-based meat in five to 10 minutes at a cost of less than 50 cents.

Mr Scionti said: We are getting closer to reaching Churchill’s prediction in 1931, who said that “we shall escape the absurdity of growing a whole chicken in order to eat the breast or wing by growing these parts separately under a suitable medium”.’

The objective was to reduce greenhouse gas emissions from livestock, which represent 14.5 per cent of the total greenhouse emissions caused by man, he said.

He said the steak needed more work to look like a regular item on a restaurant menu.

‘Its appearance can be improved with an investment of time and new prototypes, since this aspect is very important from the consumer’s point of view,’ he told Spanish newspaper El Pais.

He said the cost and time it currently takes to produce the steaks’ would fall when he started making them on a larger scale.

A cook at the university said: ‘They cook really well. They don’t burn or stick to the pan.’ 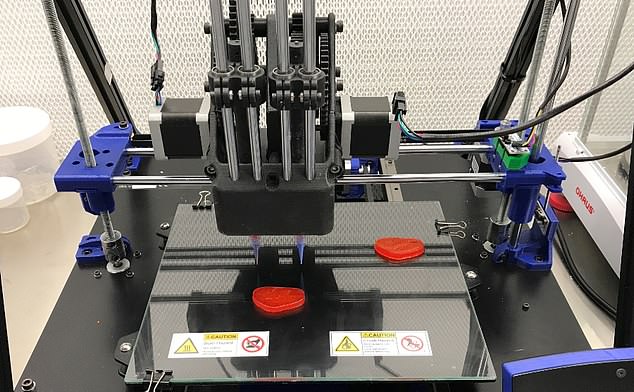 The Italian researcher developed his 3D printing machine (pictured) to make vegetarian chicken and steak at the Polytechnic University of Catalonia in Barcelona, Spain 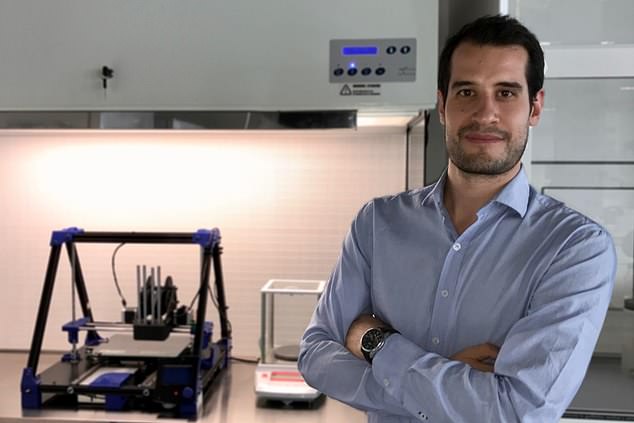 Giuseppe Scionti (pictured) said he had already approached restaurant owners about selling his vegetarian food to customers. One chef said it cooked well without sticking or burning