4,000 British jobs are put at threat as US imposes tariff

One of Northern Ireland’s largest employers faces paying a huge tariff on its exports of planes to the US after losing the first stage of an international trade dispute.

Aerospace manufacturer Bombardier employs more than 4,000 at its Belfast factories and is due to begin delivering an order for up to 125 new jets to Atlanta-based Delta Airlines next year.

But Bombardier, a Canadian-owned multinational, suffered a major blow on Tuesday night after a preliminary finding from the US Department of Commerce imposed an intermediary tariff of 219.63%.

Rival Boeing claimed it received unfair state subsidies from the UK and Canada, allowing the sale of airliners at below cost prices in the US. 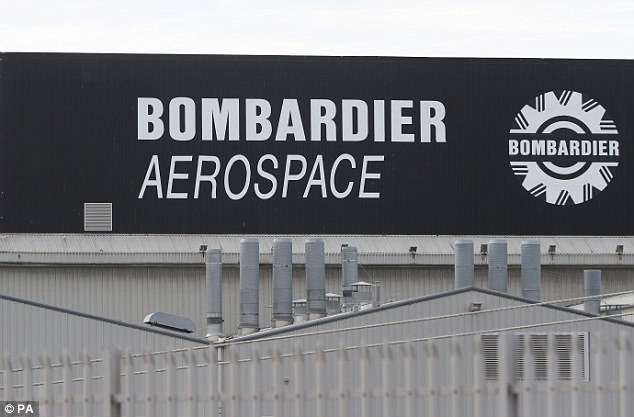 US secretary of commerce Wilbur Ross said: ‘The US values its relationships with Canada, but even our closest allies must play by the rules.

‘The subsidisation of goods by foreign governments is something that the Trump Administration takes very seriously, and we will continue to evaluate and verify the accuracy of this preliminary determination.’

The final ruling on the pricing policy of Bombardier’s new C-Series is made by official agencies across the Atlantic is expected to take place in February, trade unionists have said.

Bombardier supports hundreds of other jobs through its suppliers and has been a major employer in Northern Ireland for almost 30 years.

The operation’s immediate future was secured after Bombardier signed a 5.6 billion US dollar deal last year to provide its new aircraft to Delta Airlines.

Unions said this could now potentially be jeopardised.

Jimmy Kelly, Unite Regional Secretary, said: ‘The decision taken by the US department of commerce was not unexpected – unfortunately it is unlikely to be overturned by president Trump whose protectionist tendencies are well-known.

‘The threat of punitive tariffs on the C-Series will cast a shadow over Bombardier’s future unless the company can source alternative and substantial sales outside the US market.’

The Department of Commerce’s enforcement and compliance unit is responsible for vigorously enforcing US trade laws and does so through an impartial, transparent process that abides by international rules and is based solely on factual evidence, its statement said.

It added: ‘Imports from companies that receive unfair subsidies from their governments in the form of grants, loans, equity infusions, tax breaks and production inputs are subject to ‘countervailing duties’ aimed at directly countering those subsidies.’

The C-Series wings are made in Belfast, employing at least 800 people directly, and Prime Minister Theresa May has lobbied President Donald Trump over the importance of preserving the posts.

The British Government has urged both sides to negotiate a deal.

Mrs May was pressed to raise the issue by Democratic Unionist Party leader Arlene Foster, whose 10 MPs are propping up her minority administration in the House of Commons and are expected to play a crucial role during upcoming Brexit business in Parliament.

Mrs Foster said: ‘This is a very disappointing determination, but it is not the end of the process and there are further steps that will follow.

‘The C-Series is a hugely innovative aircraft that is vital to Bombardier’s operations in Belfast. It is this innovation that sets the C-Series apart and it is not in direct competition with Boeing.’

The alleged unfair subsidy arose after Northern Ireland’s power sharing administration and the UK Government pledged to invest almost £135 million in the establishment of the C-Series manufacturing site in Belfast. 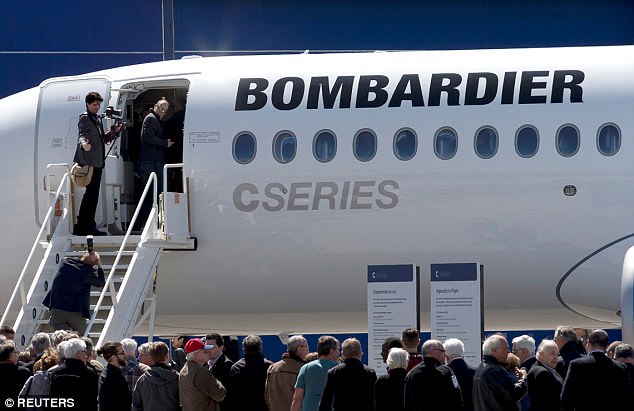 A preliminary finding from the US Department of Commerce imposed an intermediary tariff of 219.63% 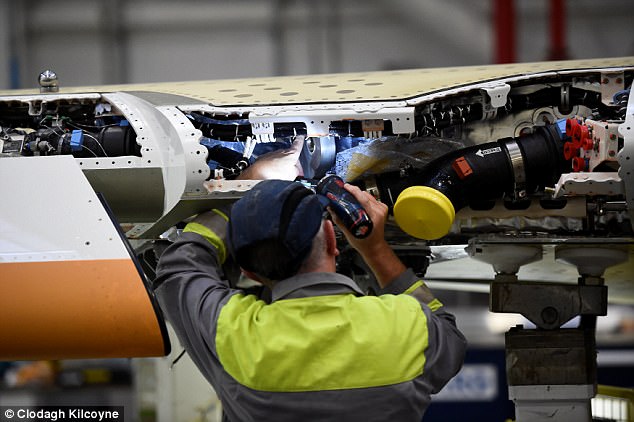 A man works on C Series aeroplane wing in the Bombardier factory in Belfast, Northern Ireland, on Tuesday

The programme also received one billion US dollars from the Canadian provincial government in Quebec in 2015 when its fortunes appeared to be ailing.

Boeing’s complaint said it was seeking a ‘level playing field’ for global competitors, but Bombardier accused its rival of hypocrisy.

The C-Series is a single-aisle, mid-range aircraft which will provide competition for the Boeing 737.

Delta is taking the smaller CS100 model of the plane.

He said another 9,400 supply chain jobs could be wiped out in Northern Ireland on top of those directly employed at the plant.

He added: ‘That’s 14,000 people in Northern Ireland now in jeopardy – and GMB is fighting tirelessly to save our members’ livelihoods.

‘The Prime Minister went running to Northern Ireland and the DUP when her job security was threatened.

‘Workers in Northern Ireland and beyond are now looking to the Prime Minister to intervene swiftly on the international stage to protect their jobs.’

A Government spokeswoman said: ‘This is a disappointing interim statement but only the first step in the process. A

‘s the Prime Minister said last week, we will continue to strongly defend UK interests in support of Bombardier at the very highest level because an adverse outcome risks jobs and livelihoods among the 4,200 skilled workers in Belfast.

‘Boeing’s position in this case is unjustified and frankly not what we would expect of a long-term partner to the UK – as well as damaging the wider global aerospace industry.

‘We will continue to work closely with the Canadian government to encourage all parties to reach a credible resolution as quickly as possible.’