Surrender: Aaron Eason has handed himself in to the FBI

A fourth member of a white supremacist group has been arrested for allegedly inciting violence at California protests and at last year’s deadly riot in Charlottesville.

The FBI said in a Tweet on Sunday that 38-year-old Aaron Eason handed himself in.

Prosecutors say the group’s leader and two other members were arrested last week.

All four are charged with traveling to incite or participate in riots.

Group leader Robert Rundo, 28, was arrested last Sunday at Los Angeles International Airport after returning to the US from Mexico. He appeared in federal court Wednesday, where a judge denied bail.

Two other members of the group, Robert Boman, 25, and Tyler Laube, 22, were arrested Wednesday morning.

A federal complaint alleges they took actions with the ‘intent to incite, organize, promote, encourage, participate in, or carry on riots’ last year in Charlottesville – where one woman was killed – and in the California cities of Huntington Beach, Berkeley and San Bernardino. 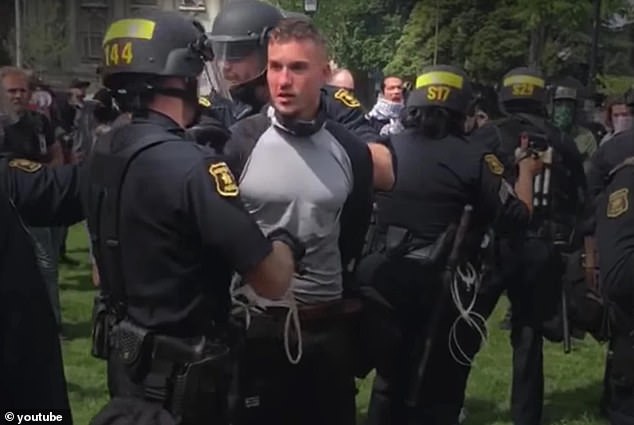 Robert Rundo, 28, leader of the Rise Above Movement, was arrested Sunday at LAX, pictured being detained in Berkeley, California in 2017

Prosecutors have described the Rise Above Movement as a militant white supremacist group that espouses anti-Semitic and other racist views and meets regularly to train in boxing and other fighting techniques.

According to the Anti-Defamation League, Rise Above Movement members believe they are fighting against a ‘modern world’ corrupted by the ‘destructive cultural influences’ of liberals, Jews, Muslims and non-white immigrants.

Members refer to themselves as the mixed martial arts club of the ‘alt-right’ fringe movement, a loose mix of neo-Nazis, white nationalists and other far-right extremists.

‘They very much operate like a street-fighting club,’ Oren Segal, director of the ADL’s Center on Extremism, said earlier this month. The group has roots in the racist skinhead movement in Southern California, Segal said.

The latest arrests come just weeks after the indictments of four other California members of RAM for allegedly inciting the Virginia riot. 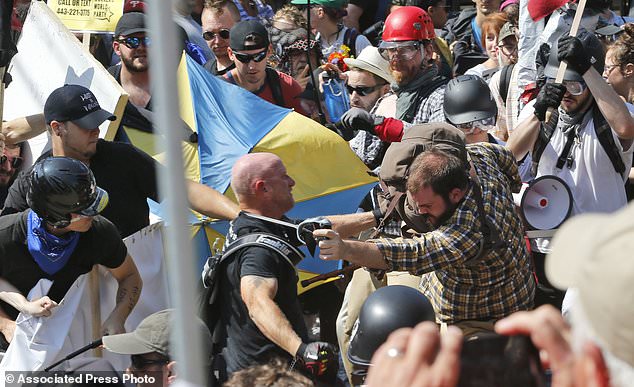 The leader of a Southern California white supremacist group and three other members were arrested weeks after indictments of other group members for allegedly inciting the riot last year in Charlottesville, pictured

In August 2017, they made their way to the ‘Unite the Right’ rally in Charlottesville with their hands taped, ‘ready to do street battle,’ U.S. Attorney Thomas Cullen said at a news conference announcing the charges earlier this month.

Hundreds of white nationalists descended on Charlottesville in part to protest the planned removal of a statue of Confederate Gen. Robert E. Lee.

Clashes erupted August 11 as a crowd of white nationalists marching through the University of Virginia campus carrying torches and chanting racist slogans encountered a small group of counter-protesters.

The next day, more violence broke out between counter-protesters and attendees of the ‘Unite the Right’ rally, which was believed to be the largest gathering of white nationalists in at least a decade.

Street fighting exploded before the scheduled event could begin and went on for nearly an hour in view of police until authorities forced the crowd to disperse.

After authorities forced the rally to disband August 12, Heather Heyer, 32, was killed when a car plowed into a crowd of counter-protesters.

The death toll rose to three when a state police helicopter that had been monitoring the event crashed, killing two troopers. 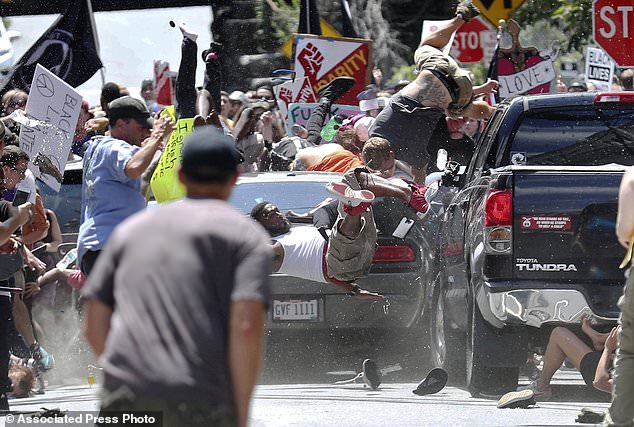 One woman, Heather Heyer, was killed when a car plowed into a group of protesters demonstrating against a white nationalist rally in Charlottesville, Virginia, last year