50 reasons you should stick around in Sydney

Most holidays to Australia start in Sydney, where the famous harbour and Opera House are show-stoppers.

But there’s so much more to the cultural capital.

Here are 50 tips on how to make the most of one of the finest cities on Earth.

Hair-raising climbing tours of Sydney Harbour Bridge cost from £145 with a safety briefing included (bridgeclimb.com). But if you just want to see great views – and get your bearings – ascend one of the support pylons for £8.20. pylonlookout.com.au

Afterwards, go for a drink in the heart of Sydney, where settlers first stepped foot in 1788. The Glenmore pub is situated up a small hill in the Rocks neighbourhood. Most tourists stick to the waterfront, so it’s quieter here – and perfect for an afternoon tipple. theglenmore.com.au

Feel jet-lag evaporate at Bradfield Park, next to Sydney Harbour Bridge on the north bank – it’s fantastic for a quiet picnic with views of the Opera House. 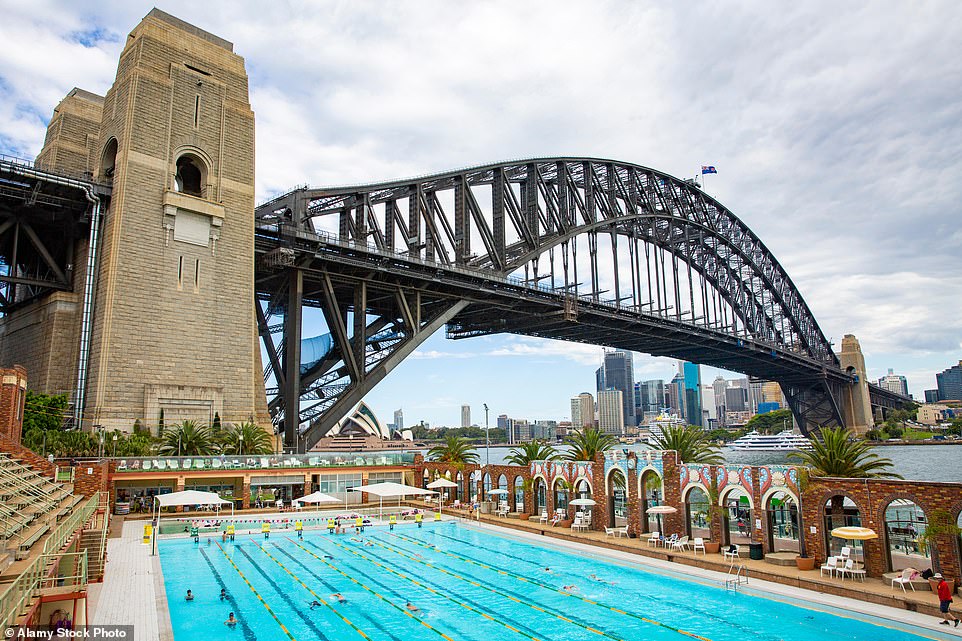 How about a city swim? Next to Bradfield Park is North Sydney Olympic Pool, which has 50-metre open-air lanes and old-fashioned locker rooms. Entry £4.50. northsydney.nsw.gov.au

The Museum of Contemporary Art in the Rocks – not far from the Glenmore pub – has free exhibitions with a focus on new Australian works, plus a great little gift shop. mca.com.au

Is the Art Gallery of New South Wales home to the most important art collection in Australia? More than 33,000 works are here – and they’re free to see. Plus there are the beautiful Royal Botanic Gardens next door. artgallery.nsw.gov.au

The architecture inside the Sydney Opera House. Don’t forget to have a drink or a meal at the Opera Bar

The State Theatre on Market Street in the Central Business District is home to the Sydney Film Festival and is a glittery, golden treat. Book ahead. statetheatre.com.au 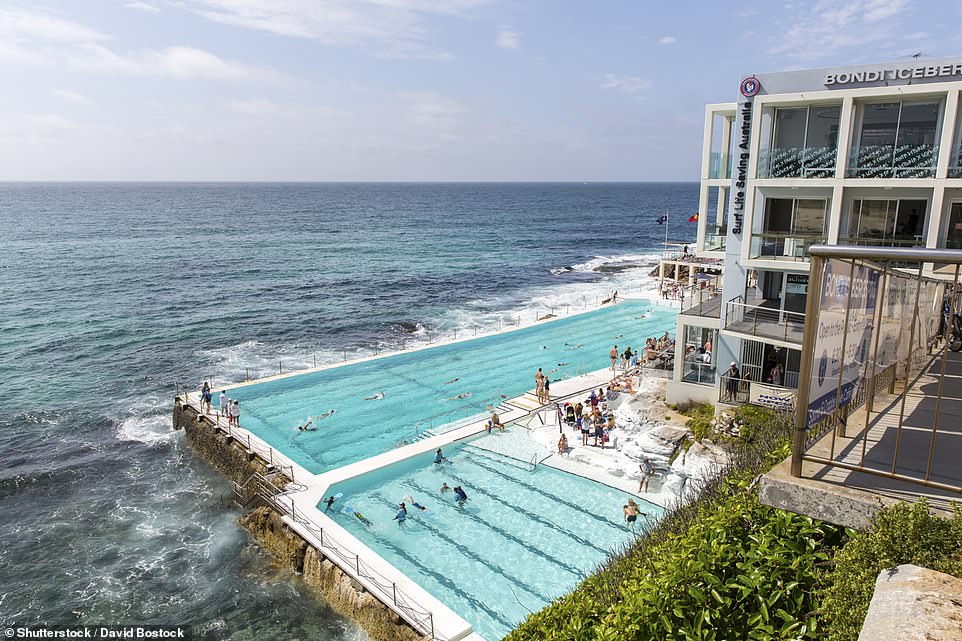 It’s £4.40 to go to the Icebergs pools by Bondi Beach (above) but free to swim at the quieter Bronte Baths, just one-and-a-half miles away

The city has more than 40 seawater pools. It’s £4.40 to go to the Icebergs pools by Bondi Beach but free to swim at the quieter Bronte Baths, just one-and-a-half miles away.

Make like a Sydneysider and buy a tube of factor-50 suncream produced by Cancer Council Australia, widely available (£8.15).

Wall murals on the southern end of Bondi Beach are like an open-air gallery with Aboriginal works.

Bondi to Coogee beach is about a four-mile walk and passes the sandy cove at Bronte Beach, where there are free outdoor gas barbecues.

Get an Opal card (which works like London’s Oyster card) for cheaper travel on ferries, buses, trams, trains and metro. transportnsw.info 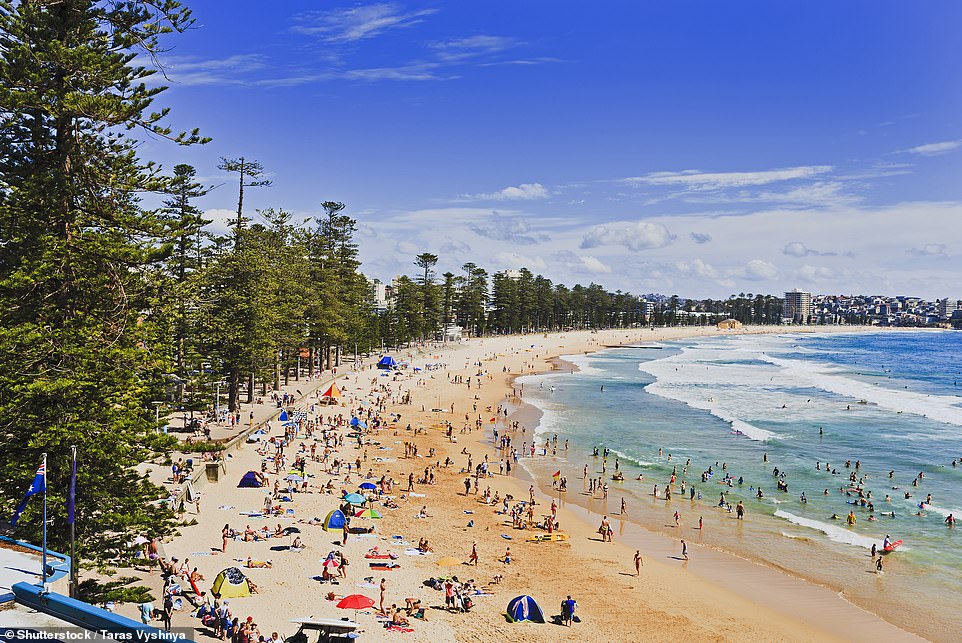 For great surfing, catch the 30-minute ferry from Circular Quay to Manly Beach. It costs £5.20

The city is swarming with Ubers. Sydney is brilliant for both Ubers and regular taxis for easy sightseeing.

Let your hair down at Frankie’s pizzeria, a lively music venue just off Circular Quay. frankiespizzabytheslice.com

The Baxter Inn serves whisky cocktails in a dimly lit basement on Clarence Street. Open till 1am Monday-Saturday. thebaxterinn.com

Foodies rave about the crocodile and emu pizzas at the Australian Hotel pub/restaurant in the Rocks; £12.60. australianheritagehotel.com

24. Learn to shuck an oyster

Tours of Sydney Fish Market in the Pyrmont district – where 55 tons of seafood are sold each day – start at 6.40am on weekdays, last just under two hours and cost £24. sydneyfishmarket.com.au 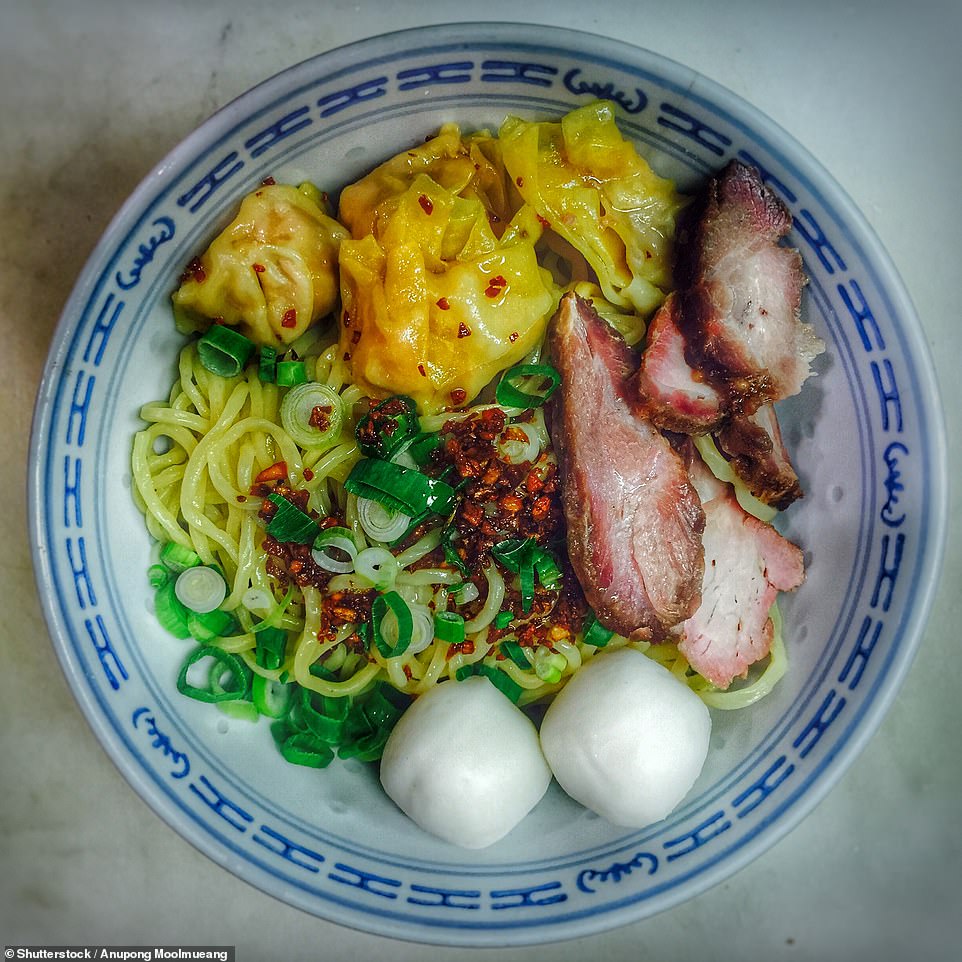 Eastern promise: An impressive variety of Asian specialities is available in the Chinatown diners

Still peckish? Nearby Chinatown is where ten dumplings are to be had for £6. Try the Chinese Noodle Restaurant on Quay Street.

The western suburb of Cabramatta is home to a Vietnamese community – and excellent Vietnamese restaurants (naturally).

Foodies make a beeline for Marrickville Organic Markets on Sundays, where there are also clothing stalls. marketsandfairs.com.au

Check out cutting-edge art at the White Rabbit Gallery on Balfour Street in Chippendale then the futuristic apartments in Central Park.

Around the corner from Central Park, Spice Alley is a warren of Vietnamese, Thai, Malaysian and Singaporean food. Wok-fried Singaporean chilli chicken with rice is £8.70. spicealley.com.au

33. Hang out with hipsters 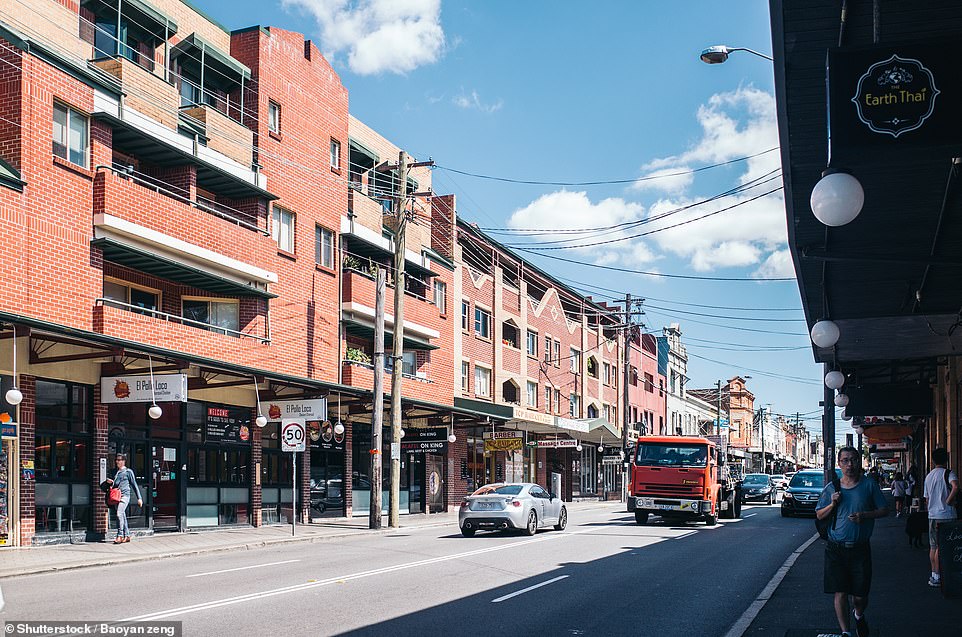 Hang out with hipsters in Newtown, a bohemian suburb with vintage clothes shops, cafes and rooftop bars

Young Henrys in Newtown, a cool microbrewery that opened in 2012, produces ales, ciders and lagers on Wilford Street. younghenrys.com

Lentil As Anything, also in Newtown, gets the thumbs-up from vegetarians and vegans. Pay as you can policy; £7 is a guide price. lentilasanything.com/newtown

Wendy’s Secret Garden, an oasis with ancient trees and hidden terraces, has views of Sydney Harbour from Lavender Bay. Wendy Whiteley began transforming the garden as therapy after her artist husband died in 1992. Free entry. wendyssecretgarden.org.au

Enjoy an espresso, a glass of wine or excellent poached eggs on toast (£5) at the little cafe of Berkelouw bookshop in the Paddington neighbourhood. A Sydney literary institution with rare second-hand books. berkelouw.com.au

Around the corner, Cuckoo Callay offers super-sized breakfasts including ‘Return of the MacDaddy’ croissants with macaroni cheese, bacon and poached eggs for £11. cuckoo-callay.com.au

The nearby Little Albion guesthouse has vibrant, retro rooms inspired by the 1920s and 1970s in the heart of Surry Hills; from £111 B&B. i-escape.com 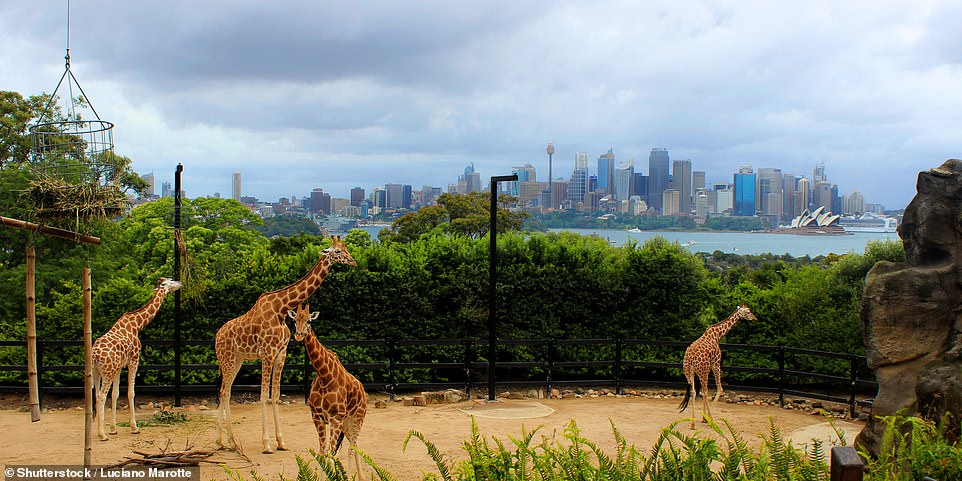 Wild: Taronga Zoo offers ‘Roar and Snore’ packages in a luxury tent with views of Sydney Harbour and the lion enclosure

Taronga Zoo offers ‘Roar and Snore’ packages in a luxury tent with views of Sydney Harbour and the lion enclosure. From £618 a night for a family of four. taronga.org.au

Pablo’s Vice is a lovely little cafe on Crown Street in Darlinghurst – close to Surry Hills – with an open window into a sunken room where some of Sydney’s best coffee is brewed each morning.

Palm Beach is where soap opera Home And Away is filmed. See Alf’s Bait Shop and the Summer Bay Diner from the series. 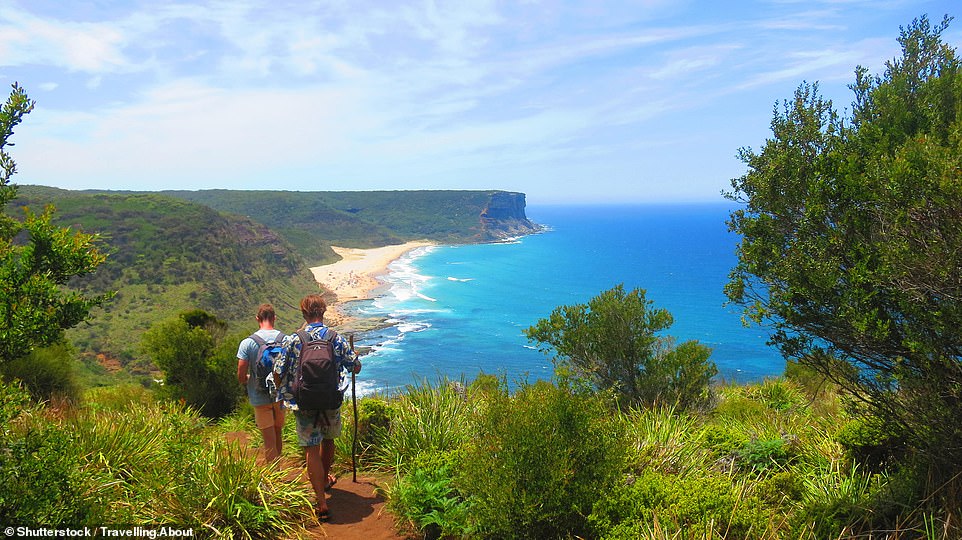 Explore: A breathtaking view of Garie Beach in the Royal National Park

Head to Royal National Park for a seven-mile walk through the bush, taking in magnificent Garie Beach, waterfalls, rocky outcrops and swimming and picnic spots. nationalparks.nsw.gov.au

The Monster Skate Park is a complex of ramps for skateboarders and BMX bike riders in Sydney Olympic Park.

Join Sydneysiders for a morning run in the Royal Botanic Gardens.

It’s a five- to seven-hour drive south-west to the Thredbo and Perisher ski resorts. Plan it right and it’s possible to ski and surf from Sydney in a single day. thredbo.com.au, perisher.com.au 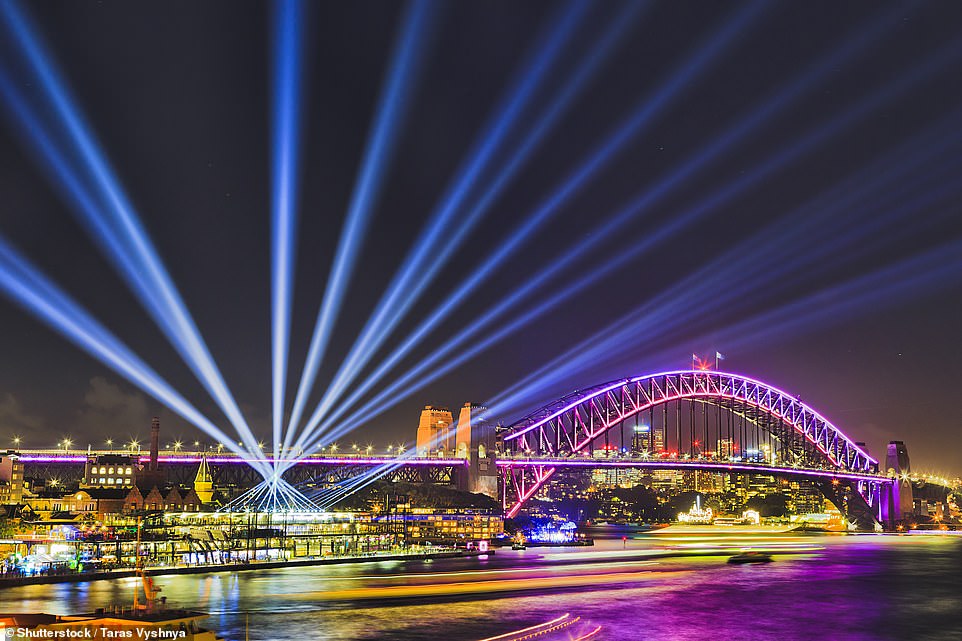 Vivid Sydney is an annual May- to-June light show when the Sydney Opera House is a blaze of artily choreographed lights each night, with many other bright displays in the downtown area. There are accompanying cultural talks, workshops and music gigs. vividsydney.com

T. D. Isacke was a guest of Destination NSW (destinationnsw.com.au) and Vivid Sydney (vividsydney.com). This is the city’s annual May-to-June light show with accompanying cultural talks, workshops and music gigs. Emirates (emirates.com) has return flights from Gatwick to Sydney via Dubai from £630 this month.