At least three people have been killed in a huge earthquake in Bali.

Chrissy Teigen live tweeted the disaster as she is currently vacationing in Bali with her singer husband John Legend, 39, and their two children Luna, two and Miles, two months.

The model and prolific tweeter, 32, jumped on social media as a magnitude 7.0 earthquake rocked Lombok and aftershocks shook the holiday home she is staying in sparking a tsunami warning.

Chrissy told her 10.6million followers the island was experiencing aftershocks after the initial tremor and she walked outside naked holding her newborn son. Aftershocks of a 7.0 magnitude caused destruction on the tourist island of Bali, where walls and motorcycles were floored at this mall in Indonesia 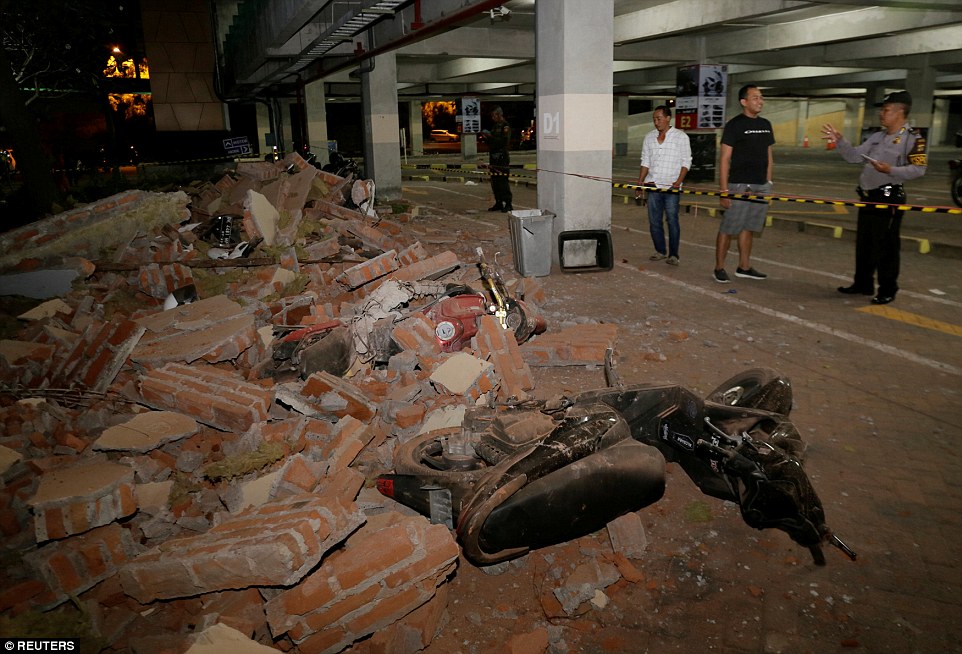 A policeman examines debris that fell and crushed parked motorbikes following a strong earthquake at a shopping center in Kuta, Bali, on Sunday 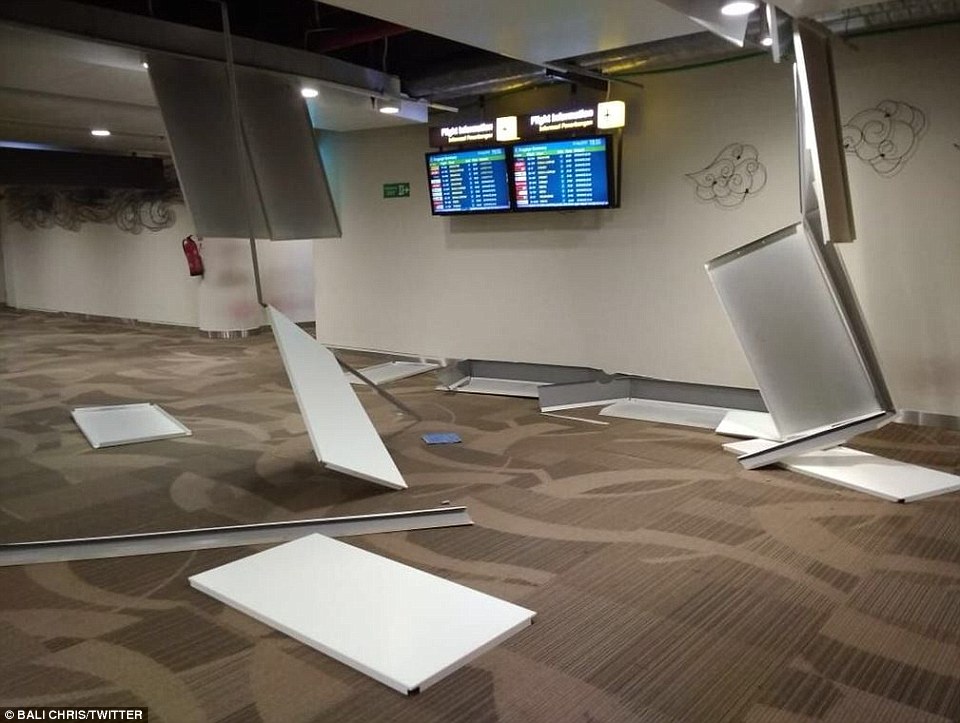 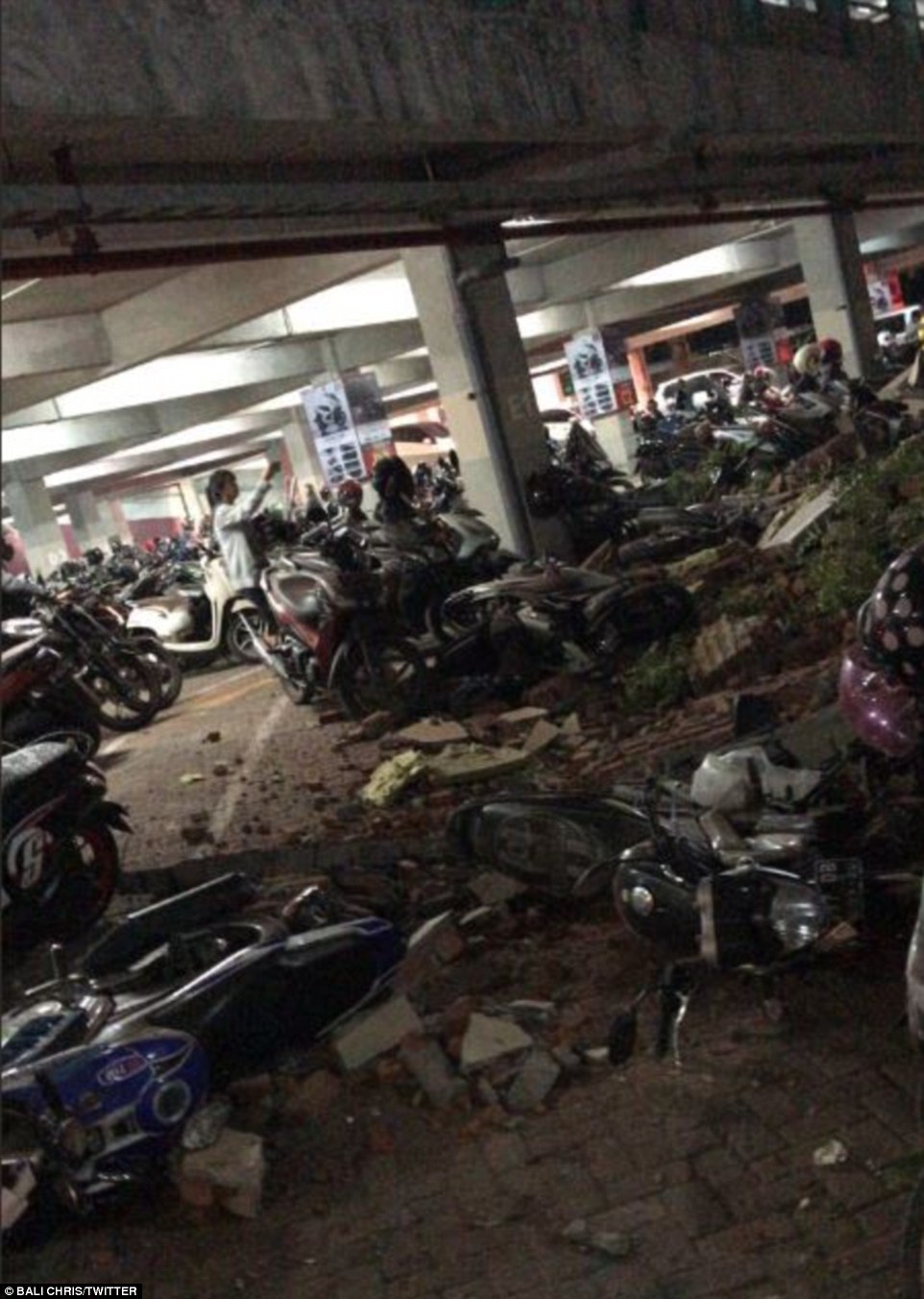 Another shot of a carpark which was reduced to rubble by the powerful 7.0-magnitude earthquake 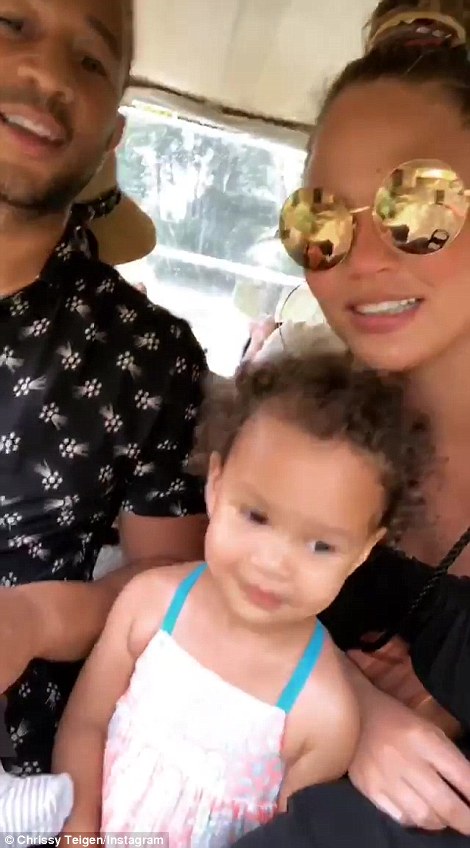 Her series of tweets read: ‘Bali. Trembling. So long.

‘Oh man. We are on stilts. It felt like a ride. 15 solid seconds of “hooooooly s**t this is happening.

‘I’m either still trembling or these little quakes won’t stop IM TRYING TO BE NORMAL HERE.

‘Great a news story just talked about my crotch tweet in the middle of earthquake tweets I gotta delete it, that can’t be how I go down.

‘Another one, small but please stop, Earth.’

The tremors in Lombok come a week after a powerful 6.4-magnitude earthquake struck the popular Indonesian tourist destination, killing 14 people and injuring at least 162.

The quake sent people running in panic from homes and hotels in the early morning.

There was two more strong secondary quakes and more than 60 aftershocks.

Over an hour later the tsunami warning was lifted. 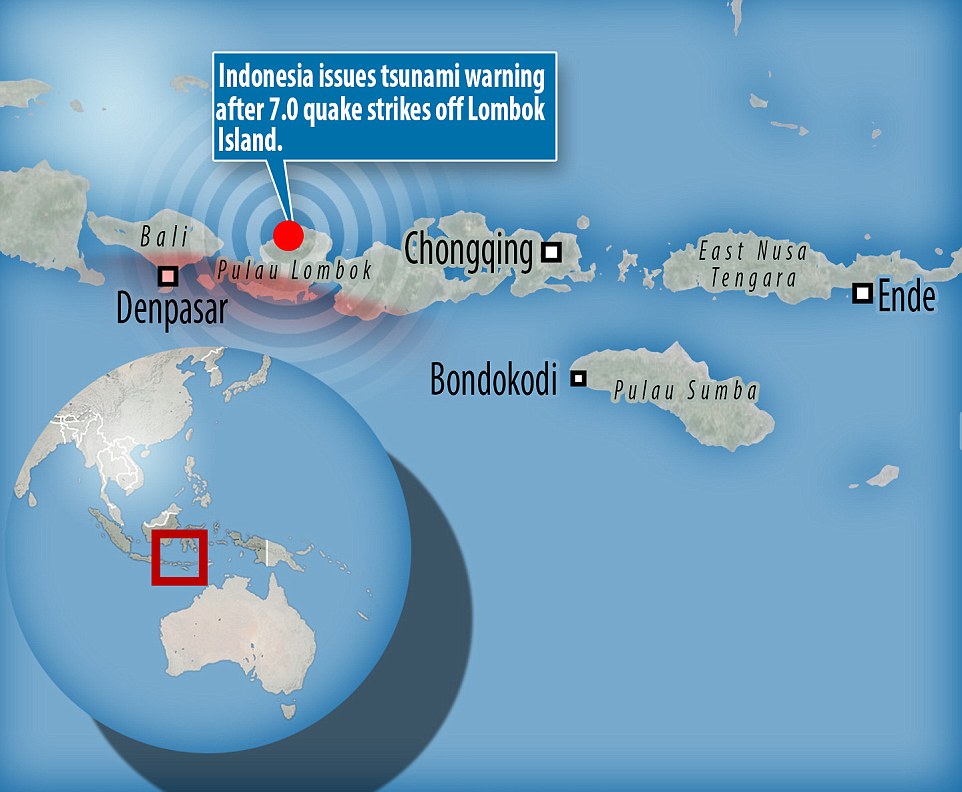 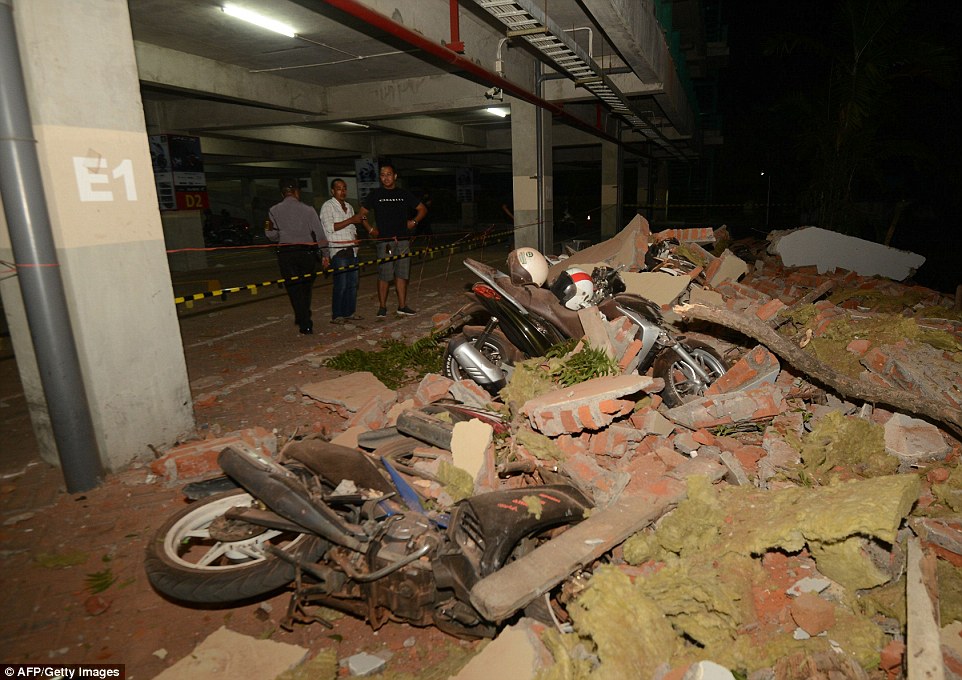 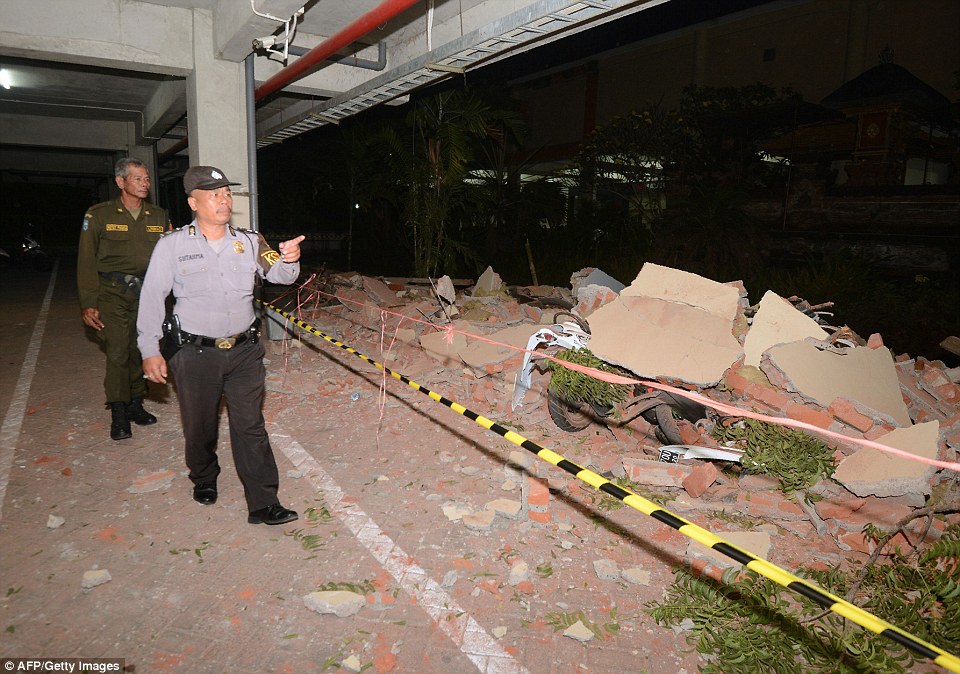 The quake sent people running in panic from homes and hotels in the early morning. A policeman gestures as he walks next to damaged bikes and debris at a mall in Bali’s capital Denpasar 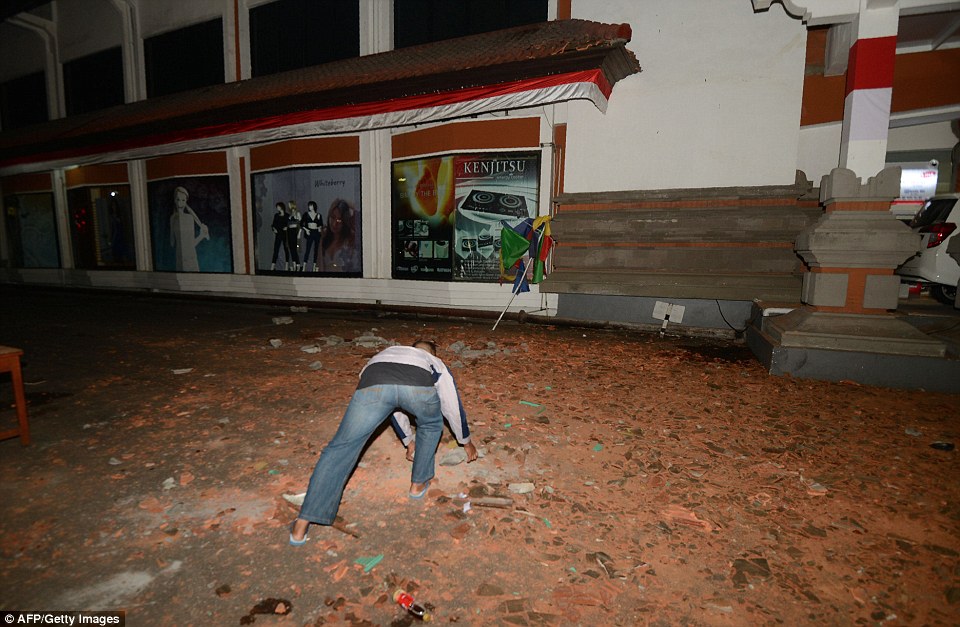 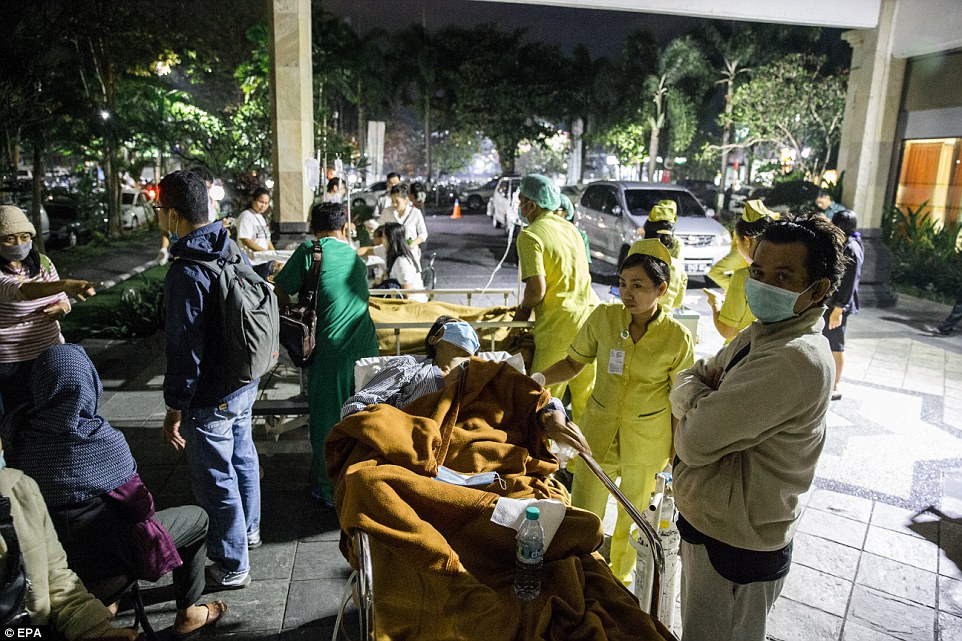 Hospital patients are moved outside of the hospital building after an earthquake was felt in Denpasar, Bali 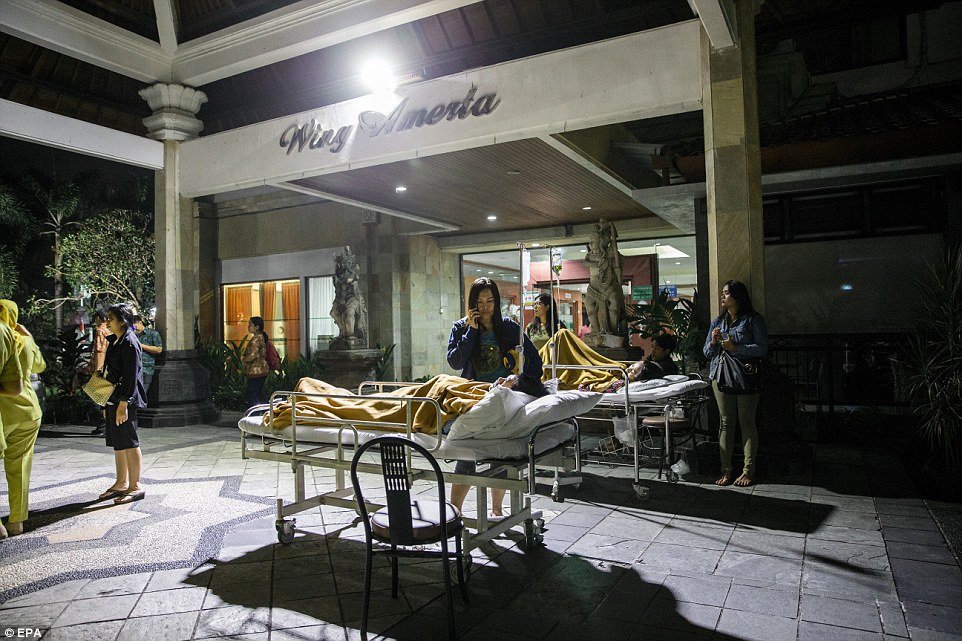 Quake aftermath: A hospital patient is moved outside of the hospital building after an earthquake was felt in Denpasar

Twitter user @Bali_chris  shared images of heavy damaged caused on the island of Bali: ‘Strongest quake we’ve felt in the 13 years. Much stronger than the last one in Lombok that we felt in Bali.’

It was a very different experience for a young couple from the UK who told Mirror who got engaged just five minutes before the quake struck.

Cally Charles, 23, said her partner Ashley Knight had popped the question on a beach and were in the lift heading back up to their hotel.

‘It was the scariest moment of my life,’ she said.

‘Five minutes before the earthquake my boyfriend proposed on the beach! He’s one of a kind he made the earth move for me!’

Another holidaymaker Natasha Millheim said: ‘My partner and I are in Ubud and we were standing outside by the pool of our hotel when everything started shaking,’ she said.

‘We could hear locals screaming and everyone in our lodge ran out. The pool water was gushing out and the ground was shaking tremendously.

‘Once it stopped our hotel host returned and explained he was at the grocery where everyone was screaming and running out.’ 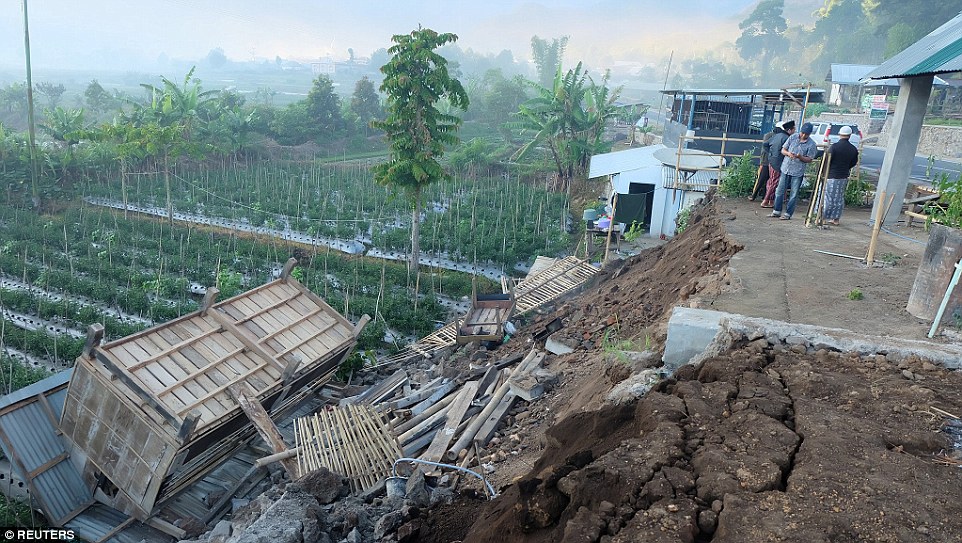 Lombok has been hit by a 7.0 magnitude earthquake prompting a tsunami warning. Pictured: Damage caused by last week’s quake which killed 14 people on the Indonesian island on July 29