Getting a good night’s sleep is the holy grail for anyone who struggles to nod off or spends hours tossing and turning.

Now shoppers are claiming that a silk sleep mask that costs just £7.50 in the UK and $9.99 in the US has completely transformed bedtime, with many saying they now fall asleep instantly.

The Alaska Bear natural silk sleep mask and blindfold has more than 7,000 five star reviews on Amazon with shoppers hailing it as the best product of its kind for its ability to completely block out light.

The China-based manufacturers say its success is all down to being made from 100 per cent breathable mulberry silk on both sides.

‘The breathable, natural fibres of hypoallergenic silk allows healthy oxygen in while keeping dry air out,’ they claim.

The Alaska Bear sleep mask, made from 100 per cent mulberry silk, has been hailed as a miracle product by shoppers thanks to its ability to block out light

Meanwhile, an easy-to-adjust headband ‘won’t tangle hair or snag pillow like contoured masks that use Velcro’ and the plastic adjuster stays at the back of the head rather than the temples, which can be uncomfortable for those who sleep on their sides.

One shopper said they had bought it as a last resort to cure their chronic insomnia before seeking professional help and they’re now sleeping a lot better.

Another said they previously couldn’t sleep without blackout curtains, but now they nod off in minutes and enjoy better quality rest.

Many customers also noted that it works a treat even when they try to catch forty winks during daylight hours.

Napping during the day is no problem, and it’s also comforting when you have a headache

It’s not quite cured this woman’s chronic insomnia, but she’s certainly sleeping much better – and it cost a lot less than professional help

The products has received more than 7,000 five star reviews on Amazon

Earlier this year insomniacs were praising yet another ‘miracle’ product – this time taking the form of a body lotion.

Shoppers and Reddit users have raved about the power of an £8 ‘miracle’ body lotion from Lush that they claim has helped them combat insomnia.

The Sleepy lotion was originally created last year as a limited-edition holiday exclusive but it was so popular that it’s been brought back as a permanent product in store. 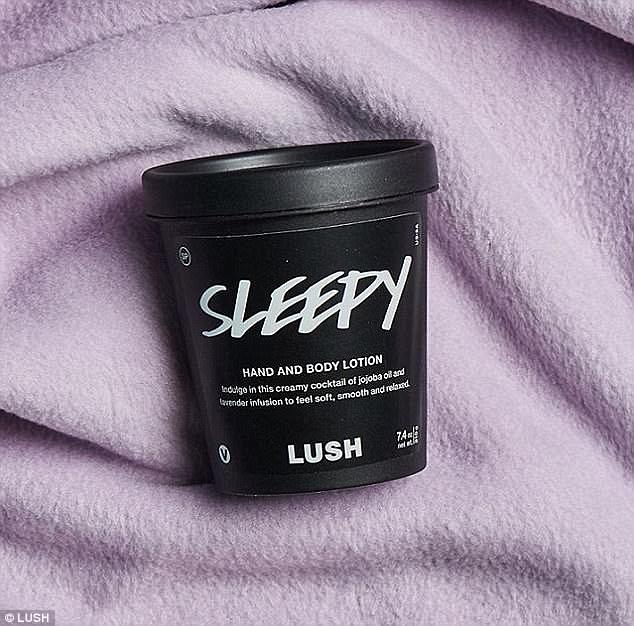 Lush’s Sleepy lotion, which costs £7.95, was brought back from a limited edition product after shoppers raved about how good it was at helping them nod off

Fans took to the brand’s review section on its website, as well as Reddit, in their droves to comment on the power of the lavender flower and sweet tonka absolute-infused lotion.

Taking to the internet, one user revealed: ‘I sleep so much better with this body lotion. It’s so moisturising and has an amazing smell. Definitely my new favourite!’.

Another claimed it helped calm her nerves, too: ‘I used to take anxiety medication for 11 years and had to stop recently which was pretty terrible. But I found that using and smelling Sleepy can help my anxiety not be as bad.’

Others hailed it the one product that can actually help them through the worst of their nights, and others simply dubbed it ‘magic’.