There is strong suspicion that a top executive with an NBA team created five anonymous social media accounts which he then used to disparage his players, coaches, predecessors, colleagues, and media members.

Bryan Colangelo, the president of basketball operations for the Philadelphia 76ers, is the man believed to have been behind secret Twitter handles that he used as a tool to bash some of his own star players on the team.

The assertion was made in a lengthy investigative report by the news site The Ringer.

The site said it received a tip from a source who claimed that Colangelo was using five Twitter accounts anonymously to hit out at two of the Sixers’ prized stars – Joel Embiid and Jahlil Okafor – as well as Nerlens Noel, the former Sixer who now plays for Dallas.

It was alleged that Colangelo also used the Twitter handles to offer criticism of his predecessor, the former Philadelphia general manager Sam Hinkie, as well as Toronto Raptors executive Masai Ujiri.

Bryan Colangelo, the president of basketball operations for the Philadelphia 76ers, is the man believed to have been behind secret Twitter handles that he used as a tool to bash some of his own star players on the team

Colangelo, it was alleged, also used the Twitter handles to reveal sensitive information and gossip about players in the hopes that local reporters covering the Sixers would absolve him of blame for the team’s troubles.

The Ringer said it was given five Twitter handles by the source, who conducted their own open-source data analysis.

This analysis revealed that the five accounts had eerie similarities that was difficult to chalk up to coincidence.

The accounts followed other Twitter accounts that were virtually identical.

‘They all have a pattern of likes, follows, and tweets which are EXTRAORDINARILY similar,’ a source told The Ringer.

All of those accounts followed other accounts linked to 76ers players, beat reporters that cover the team, beat writers who cover the Toronto Raptors, Canadian high school basketball, and University of Chicago basketball.

Before arriving in Philadelphia in 2016, Colangelo was the top executive for the Raptors.

He was succeeded in Toronto by Ujiri.

Colangelo’s son, Mattia Colangelo, is enrolled at the University of Chicago. He currently plays for the school’s basketball team. 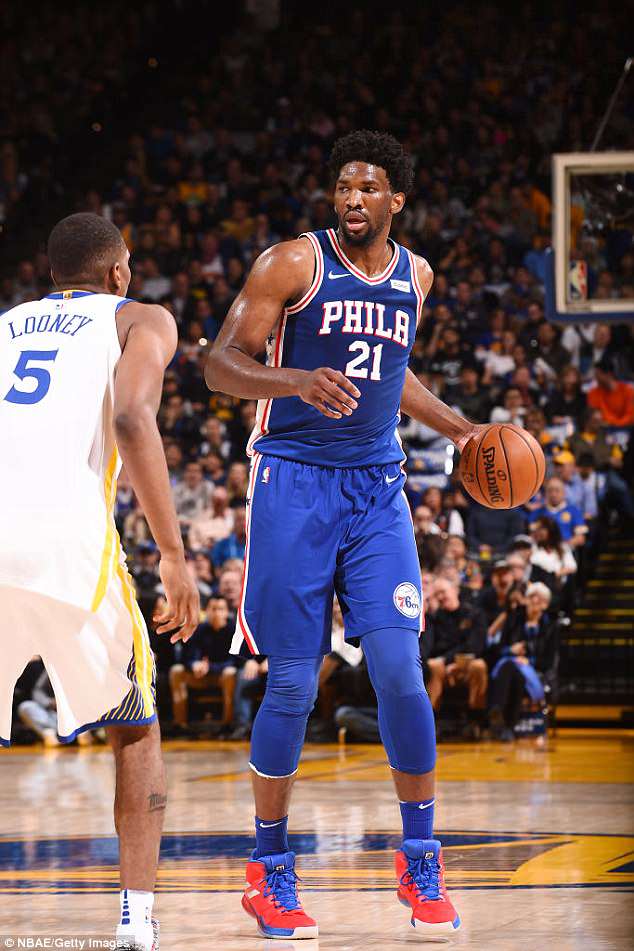 The news site The Ringer said it received a tip from a source who claimed that Colangelo was using five Twitter accounts anonymously to hit out the Sixers’ prized stars, among them center Joel Embiid (above)

The site reports that it did not mention the other three accounts to the Sixers in order to gauge whether the media inquiry would lead to the status of the other handles being altered.

That same day the Sixers’ media rep told The Ringer that they would ask Colangelo about the two accounts.

Within hours of the media rep’s call to The Ringer, the other three accounts that were unmentioned had their settings switched from public to private.

The s_bonhams account, which had posted tweets on a daily basis, stopped posting on the day of the inquiry, according to The Ringer.

That account also promptly unfollowed some 37 accounts linked to Colangelo, including accounts related to his son’s basketball team, his son’s high school coach, and an account with the same name as Warren LaGarie, an agent who has represented Colangelo in the past.

‘To me, there is no conceivable world where that is not Bryan Colangelo, himself,’ the anonymous source told The Ringer. 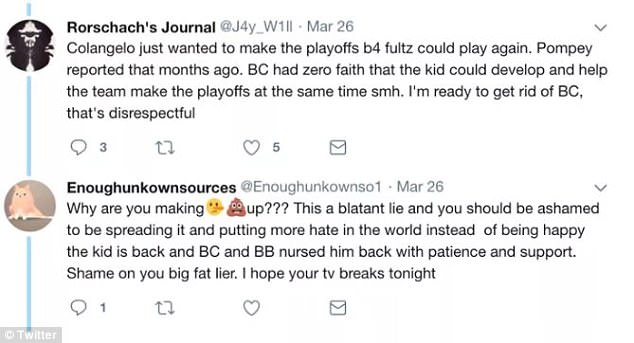 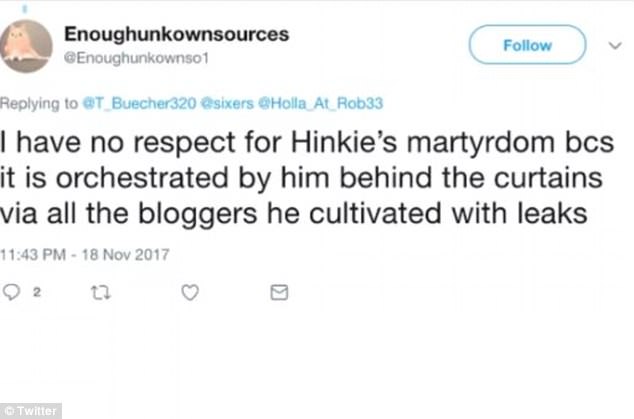 This tweet above from the same Twitter handle contains criticism of Colangelo’s predecessor in Philadelphia, Sam Hinkie 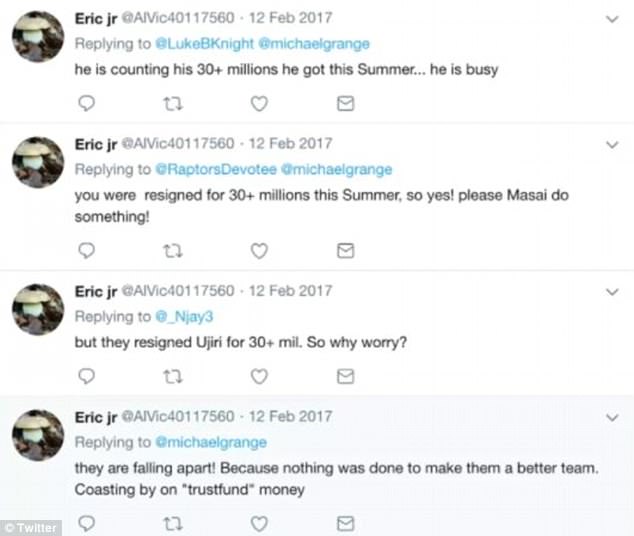 Eric jr also tweeted disparaging remarks about Masai Ujiri, the man who succeeded Colangelo as the top basketball executive with the Toronto Raptors

On Tuesday, the team confirmed to The Ringer that Colangelo is indeed the operator of one of the accounts.

‘Like many of my colleagues in sports, I have used social media as a means to keep up with the news,’ Colangelo said in a statement.

‘While I have never posted anything whatsoever on social media, I have used the @Phila1234567 Twitter account referenced in this story to monitor our industry and other current events.

‘This storyline is disturbing to me on many levels, as I am not familiar with any of the other accounts that have been brought to my attention, nor do I know who is behind them or what their motives may be in using them.’

If Colangelo is indeed behind the ‘burner accounts,’ it would reveal him to be an extremely thin-skinned and petty executive who is eager to settle scores with his predecessors and critics. 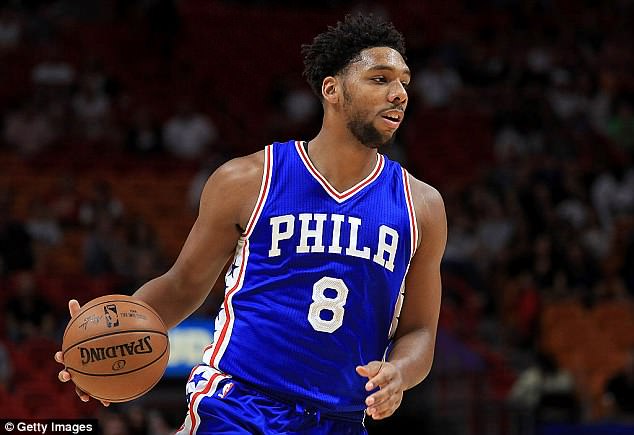 Another Sixers star, Jahlil Okafor (above), is accused by the anonymous Twitter user believed to be Colangelo of failing a physical and sabotaging a trade that the team was working on

The source of Colangelo’s insecurity appears to be the fans’ near universal admiration for his predecessor, Hinkie, who is now being credited with drafting the star players that propelled the team to a 52-win season and a victory in the first round of the playoffs.

It was Hinkie who drafted Embiid, Ben Simmons, and Dario Saric, the young core of the Sixers team.

After Colangelo arrived last year, he made a controversial trade for the top pick in the 2017 NBA draft.

He then used that pick to select Markelle Fultz No. 1 overall. Fultz has only played 17 games.

He has been on the sidelines due to mysterious ailments.

The team with whom Colangelo made the trade – the Boston Celtics – used it to get Jayson Tatum, who many believe to be an up-and-coming star.

The accounts take aim at Hinkie.

‘I have no respect for Hinkie’s martyrdom bcs it is orchestrated by him behind the curtains via all the bloggers he cultivated with leaks,’ the account @Enoughunknownso1 tweeted in November.

Another account reacted to a suggestion that Hinkie deserved credit for the franchise’s newfound success. 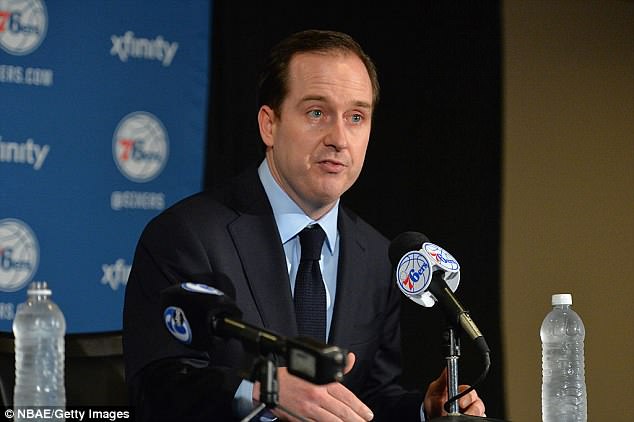 Hinkie (above), the former general manager, is largely revered by fans and credited with the team’s turnaround, while Colangelo, his successor, is perceived as someone who inherited Hinkie’s handiwork

‘BC has done nothing but clean up hinkie’s mess,’ the account wrote in January 2017.

‘Hinkie got great pieces but could [not] make the puzzle work.’

The accounts also seemed to target Ujiri, who was hired to replace Colangelo as Toronto’s top executive.

It was Colangelo who promoted Ujiri in the Toronto front office before he was fired.

After a Toronto Raptors loss in February 2017, one of the accounts posted a tweet which read: ‘Nothing seems to fall on Ujiri’s shoulders. Why?’

Another post suggested that the Raptors owe their success to players that Colangelo acquired, like Kyle Lowry and DeMar DeRozan.

One Twitter account posted: ‘they are falling apart! Because nothing was done to make them a better team. Coasting by on “trustfund” money.’

In the fall of 2016, Ujiri signed a lucrative contract extension with the Raptors.

‘You were resigned for 30+ millions this Summer, so yes! please Masai do something!’ 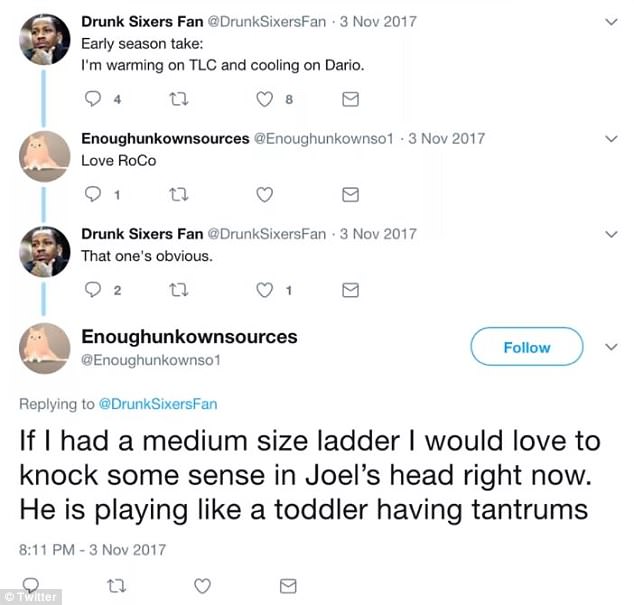 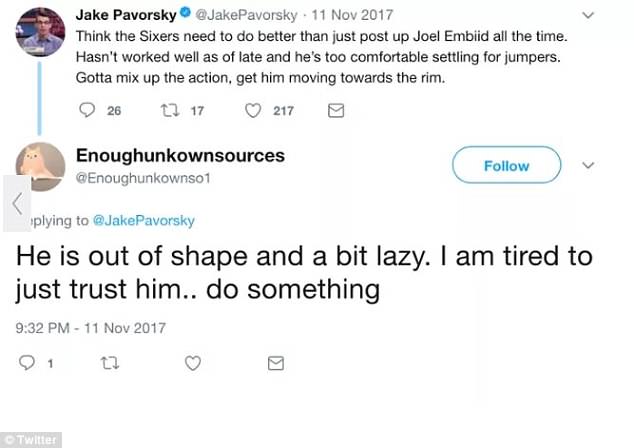 Perhaps the most damaging of all is the apparent effort made by the anonymous Twitter user to steer reporters toward pursuing stories that reflect positively on Colangelo and negatively on the team’s players.

In one tweet, @s_bonhams, whose Twitter handle is ‘Still Balling,’ called Embiid, who has emerged as an All-Star center for the Sixers, ‘selfish.’

Last fall, Embiid played in a nationally televised game with an apparent injury, prompting fans and media to criticize Colangelo.

But one of the Twitter accounts, whose handle is Eric jr, posted a tweet aimed at Embiid’s Twitter account in which the center was blamed for concealing the injury, a minor tear in the meniscus.

The tweet read: ‘Joel, you are just a kid, but why didn’t you tell docs knees hurt before Houston? You costed yrself (&us) 9+ games and playoffs.’

After Embiid was seen dancing shirtless on stage at a Meek Mill concert, Eric jr tweeted in February 2017: ‘Too bad that Embiid danced like a fool and the whole disaster happened, next time he will think twice before mocking his team.’

In another tweet, Eric jr wrote: ‘If I were mngt I would step on a ladder and kick his b#**.’

Interestingly, another account, Enoughunknownsources, used similar wording in a post nine months later: ‘If I had a medium size ladder I would love to knock some sense in Joel’s head right now. He is playing like a toddler having tantrums.’

The accounts then tried to egg on reporters so that they would pursue the story from that angle.

Eric jr tweeted at a beat reporter for the Sixers, Derek Bodner, because ‘nobody has the guts to do it.’ 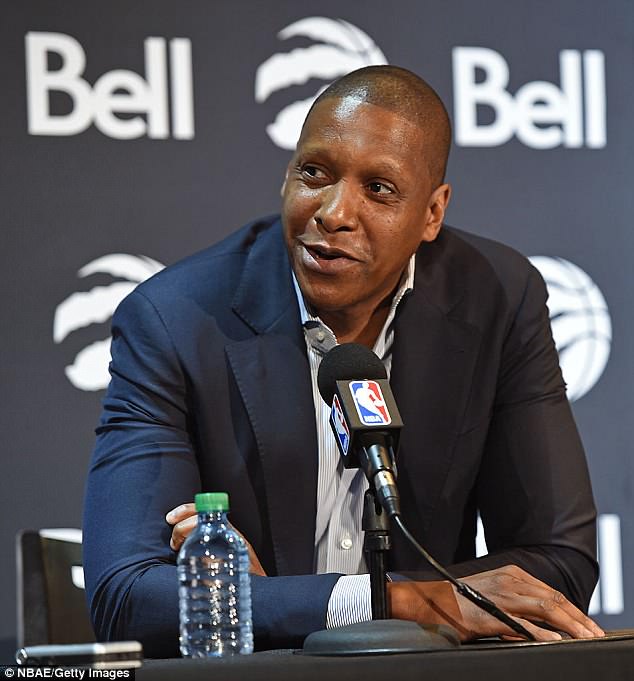 Ujiri, who was a former underling to Colangelo during the latter’s time as the head of basketball operations in Toronto, was brought back to the Raptors to succeed Colangelo after his departure

The accounts continued to cast the players in a negative light.

When Fultz was struggling with his jump shot due to what many believe is a mental block, Still Balling tweeted that the player’s family friend and trainer, Keith Williams, was to blame.

‘If somebody would care to go look for the story of what happened with his so called mentor/father figure… it would explain a lot about the shoulder and Fultz ‘ state of mind,’ Still Balling wrote in a thread responding to a December post from Bodner.

‘The so call mentor tried to force him to change the shot.

‘Tapes have surfaced of the guy making Markelle shooting while sitting on a chair, while on his back on the floor etc.

‘The guy denies it as doesn’t want to say Y was forced out of kid’s life.

‘Y nobody reports this.’

Colangelo has a track record of success as an NBA executive.

He has twice won the NBA’s Executive of the Year Awards.

His resume includes stints as general manager for the Phoenix Suns as well as his tenures with Toronto and Philadelphia.

Colangelo is the son of Jerry Colangelo, the former Suns owner who is now a special adviser to the Sixers.

Embiid, meanwhile, told ESPN that Colangelo called him on Tuesday and denied that he was the author of those tweets.

‘I talked to him and he said that he didn’t say that,’ Embiid said.

‘He called me just to deny the story. Gotta believe him until proven otherwise. If true, though, that would be really bad.’