A California traffic stop of what appeared to be a brown UPS truck turned out to be hauling 77 illegal immigrants packed inside the sweltering cargo area on Monday.

It is the second such truck stop in a week, on Friday a truck was discovered carrying 76 immigrants in Texas.

The incident unfolded after a California Highway Patrol officer pulled the truck over after observing it weaving and without tags on Old Highway 80 in Boulevard on Monday. A US Boarder Patrol Agent patrolling the area in an unmarked car asked the officer if he needed assistance.

The agent noticed the truck was riding ‘extremely low’ and observed the smell of body odor and and a pungent soap used in Mexico. Inside, five children were found among the group being smuggled.

A truck that appeared to be a UPS truck without tags was pulled over after swerving, authorities found 77 illegal immigrants packed insie

The cargo area was packed with people shoulder to shoulder according to the San Diego Union Tribune.

The driver, US citizen Shawn Lee Seiler, allowed the agent to search the vehicle, and after the authorities made the discovery, the driver admitted to taking payment for transporting the people inside.

The driver told authorities he was to be paid $100 for each unauthorized immigrant to be transported.

He also said he thought he only had 50 people in the truck, and was surprised to learn there were 77 people crammed inside.

Seiler was arrested and charged with transporting unauthorized immigrants for financial gain.

Two of the people in the group had prior deportations.

The remaining people inside the truck are being held as material witnesses in the case.

On Friday an eerily similar scene unfolded in Texas.

Sleeping on the floor and lying on top of each other, 76 illegal immigrants were found being smuggled across the US in the back of a trailer. 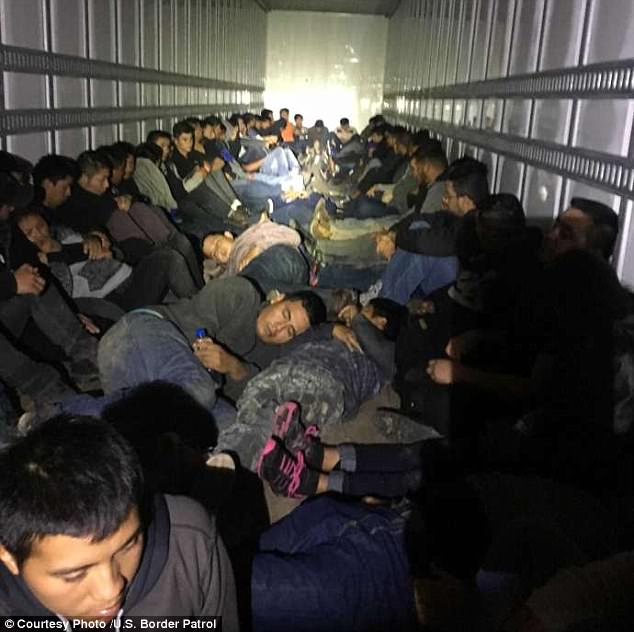 They were discovered at a checkpoint on US 83, about 35 miles north of Laredo in South Texas, the US Border Patrol said Monday.

A semitrailer was stopped in the checkpoint’s primary lane where the driver, a US citizen, was questioned about his immigration status.

His rig was kept for further inspection, and agents found the immigrants inside the trailer.

The immigrants are from Mexico, Honduras, El Salvador and Guatemala. Thirteen were unaccompanied minors. The Border Patrol says all of them are in good health.

US Immigration and Customs Enforcement spokeswoman Nina Pruneda says the driver’s identity and other details about the case are being withheld at this time.

‘These criminal organizations view these individuals as mere commodities without regard for their safety,’ said Laredo Sector Assistant Chief Patrol Agent Gabriel Acosta.

‘The blatant disregard for human life will not be tolerated. We will continue to work with our law enforcement partners to disrupt and dismantle these organizations and prosecute those responsible.’