79-year-old lady has large tumour growing from her cheek

Teresita Briones, 79, noticed a small lump under the skin of her right cheek around five or six years ago but thought nothing of it

An old lady has a tumour the size of a bucket growing from her cheek – but she is too afraid to have an operation.

Teresita Briones, 79, noticed a small lump under the skin of her right cheek around five or six years ago but thought nothing of it.

But the growth – which she thought at first was a mole – swelled and developed rapidly. Within a year it was the size of a small tennis ball.

Now some five years later it has grown to more than twice the size of her head – and leaves her barely able to sleep at night because of its unwieldy shape.

Teresita now ambles around the streets near her shanty home in Iligan City, Philippines, where passers-by help her out with small change.

‘I am afraid to have an operation’

‘If I had gone to the doctor then, maybe life would be easier now. They could have fixed this without any trouble.

‘Now the tumour is so big it makes life hard. It is not easy sleeping because of the size of it and it just keeps growing.

‘I am afraid to have an operation. I am afraid that I will not be able to wake up again after the surgery. 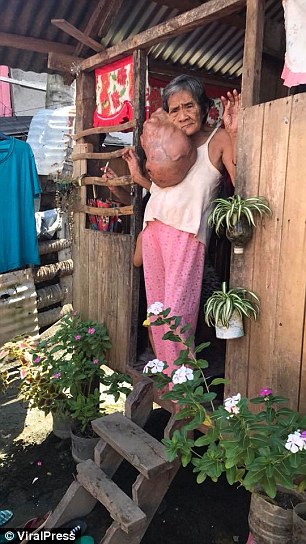 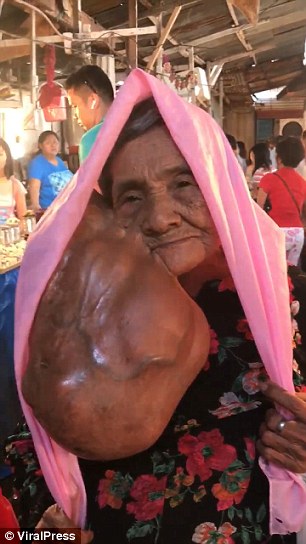 ‘There are people who are worse than me, who have had hard lives from when they were born. I was very beautiful when I was younger’

‘I am old now and I don’t think I could recover from it. I have had this so long that I don’t think that there’s anything I can do.’

Mother-of-one Teresita said that doctors in her home town told her there was nothing they could do – then advised her instead to visit capital city Manila where the ‘technology is better’.

She never visited due to the high price of travelling there, accommodation and doctors’ bills.

The exact cause of a benign tumour is often unknown.

It develops when cells in the body divide and grow at an excessive rate.

Typically, the body is able to balance cell growth and division. When old or damaged cells die, they are automatically replaced with new, healthy cells.

In the case of tumours, dead cells remain and form a growth known as a tumor.

Cancer cells grow in the same manner. However, unlike the cells in benign tumors, cancerous cells can invade nearby tissue and spread to other parts of the body.

Whether benign tumours need treatment depends on how bothersome they are.

‘I feel sorry for her’

Local resident Henry Santos, 24, said: ‘She’s old but I don’t think it’s too late for her. Our elders deserve to have a good life when they are retired.

‘She could live until she’s 90. I feel sorry for her to have to walk around with this. It looks hard for her and she has a hunched back because of the weight.’

Kunz Paz, who spoke with the woman, said: ‘She has no money and I gave her a little bit to help her. I’m not sure if her tumour could be operated on, but she said she would not want to anyway. She is afraid she might never wake up.

‘If there is a chance that anybody can help her, I am praying it is so. I hope we can make it a better Christmas this year for her.’

A British Skin Foundation spokesperson said it may be perfectly safe for Teresita to have surgery if medics assessing her say she’s strong enough.

‘Providing anesthetists consider this removal to be carried out safe under general anesthetics the risks are not very big,’ explained Dr Anton Alexandroff, who is a consultant dermatologist.

‘The patient would need to have a graft to cover surgical defect and there is a risk that graft may not take. There are also risks of infection and bleeding.

‘She is likely to have a significant scar as the result. There is also risk of recurrence.

‘The key matter here is whether anesthetists are satisfied that this procedure would be safe to undertake.’

‘I’m grateful for what people give me’

Teresita received some attention from well-wishers and good samaritans last year and had an x-ray which revealed the tumour was benign.

But since then she has not returned to the doctors for any more treatment. She now relies on her daughter’s income of around 200 Philippine Piso (£2.72, $3.8) a day while occasionally begging for food and money when they are short.

She added: ‘I don’t have a lot to get by and I’m grateful for what people give me. I don’t know what will happen if I cannot get treatment. Sometimes the tumour bleeds.

‘There are people who are worse than me, who have had hard lives from when they were born. I was very beautiful when I was younger.’