9,000 year-old stone artifacts discovered in Lake Huron came from over 2,000 miles away

9,000 year-old stone artifacts have been discovered in Lake Huron – and they were made with stone from quarry over 2,000 miles away

Stone tool artifacts dating back 9,000 years have been discovered in Lake Huron, but experts have determined they didn’t come from around the corner.

Instead, they originated in a quarry more than 2,000 miles away.

The findings note the two stone tools are made from obsidian, originating in modern-day central Oregon.

These are the oldest specimens of obsidian, a naturally occurring volcanic material that forms when lava cools rapidly, in the continental US.

‘The artifacts found below the Great Lakes come from a geological source in Oregon, 4,000 kilometers [2,485 miles] away—-making it one of the longest distances recorded for obsidian artifacts anywhere in the world.’

Throughout history, obsidian has been a ‘prized raw material’ for tools, both ancient and modern.

Not only does it have an aesthetically pleasing appearance, but it has ‘predictable flaking’ and ‘razor-sharp edges,’ the authors wrote in the study.

Stone tool artifacts dating back 9,000 years were discovered in Lake Huron. They originated in a quarry more than 2,000 miles away in modern-day central Oregon 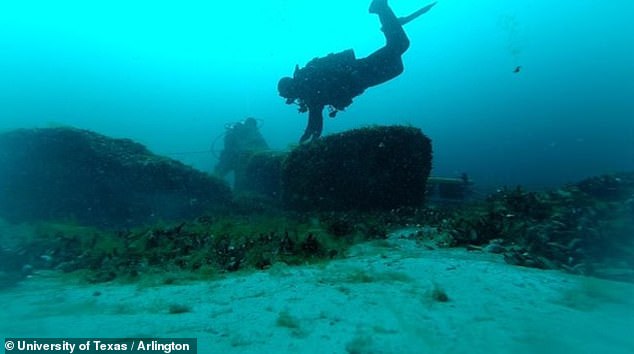 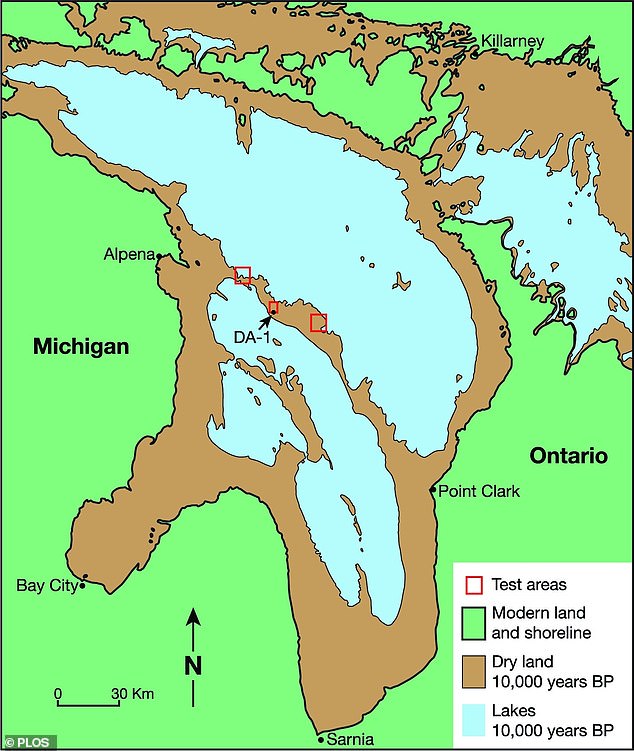 The two stone tools are made from obsidian, originating in modern-day central Oregon 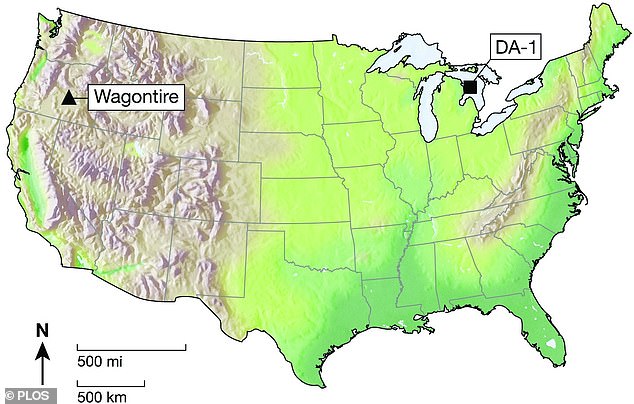 It’s unclear how the obsidian glass traveled so far from its origin, but it could be due to ‘biface refurbishment,’ essentially altering the tools to make them more useful

‘As such, it was used and traded widely throughout much of human history.’

However, it’s the fact that not only was the obsidian found underwater and undisturbed, but so far from its origins, that it has excited researchers.

‘Obsidian from the far western United States is rarely found in the east,’ Lemke added.

‘This particular find is really exciting because it shows how important underwater archaeology is,’ Lemke said.

‘The preservation of ancient underwater sites is unparalleled on land, and these places have given us a great opportunity to learn more about past peoples.’

The scientists are not sure how the obsidian glass traveled so far from its origin, but it could be due to ‘biface refurbishment,’ essentially altering the tools to make them more useful.

‘Yet, while clearly exotic, it is noteworthy that they are attributable to a relatively routine activity in a kill area and do not occur as part of any special or ritual context,’ the researchers wrote.

‘The extreme distance between source and find location raises renewed questions concerning the scale of mobility and social connectedness during the Pleistocene-Holocene transition.’

The Pleistocene-Holocene transition took place about 11,000 years ago, right around the end of the last Ice Age.

The study was recently published in the scientific journal PLOS One.